Film of the week: Shirkers is a true-life horror story for indie filmmakers

As a teenage punk, Sandi Tan dreamed of making a movie, and a charismatic older man promised to help – until he vanished with the finished reels. In this documentary, she tells the tale of her lost and found film.

from our November 2018 issue 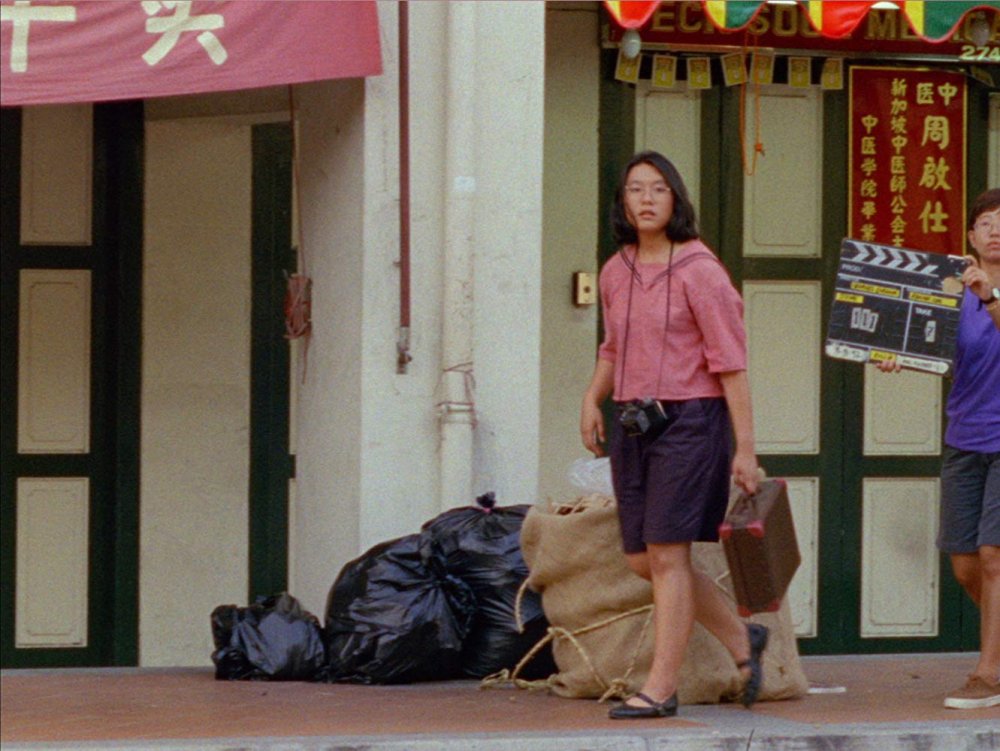 A bracingly bizarre true-life saga of indie filmmaking gone squirrelly and disastrous, this new doc explores the unmaking of another film, which itself was – or seemed destined to be – Singapore’s punk-era generational anthem movie, a teen-written, candy-coloured amateur phantasia-experiment that might’ve triggered a national super-indie New Wave that never happened. Who can say? Films that are never finished can acquire a special nimbus of passionate mystery and make great subjects for spectral, retrospective docs after the fact, depending on how much raw old footage is available. The subgenre may have begun with the BBC film The Epic That Never Was, the 1965 record of the crash-burn of Josef von Sternberg’s 1937 adaptation of I, Claudius, and who’s to say when or if the final doc isn’t better or more fascinating than the original film would’ve been? Certainly, the torque and ruefulness of lost time and missed opportunities accrue here as they don’t when a movie is merely made and released and then relegated to the streaming library menus. (Sandi Tan’s Shirkers is offered by Netflix.)

Luckily for Tan, the pristine footage of her 1992 work is thick on the ground. But she has a memoiristic story to tell first, in which she grew up absurd in Singapore as a square-peg girl in a round-hole country, enduring a teenage 1980s and 90s desperately scrounging for transgressive international music and film, even producing her own widely read zine and pirating VHS tapes. There was virtually no film production going on in the country at the time, according to Philip Cheah (the BigO magazine editor, who has a small role in Tan’s film), aside from some occasional Filipino-style pulp.

Tan had dreams of filling the vacuum, and by the time she was 18, she and her friends fell under the wing of one Georges Cardona, an expat film teacher and a kind of passive-aggressive Svengali-cum-Zelig whose manner seduced filmmaking comrades wherever he went, and who claimed to be the model for the James Spader character in Sex, Lies, and Videotape (1989). Tan and her cohort were young, naive, New Wavy and trusting, and so Cardona’s proclamations and enthusiasms went uninterrogated. The girlfriends would take long night drives with him, filming what they found, and Tan even accepted Cardona’s offer to drive across the US with him – all powerful experiences but also apparently entirely platonic. When Tan’s loopy, semi-surreal teen script, also titled Shirkers, a road movie set “in a country you can drive across in 40 minutes”, was shown to Cardona, he flipped out and together they rushed it into production, as Tan and friends were all coming back from their freshman college years abroad. 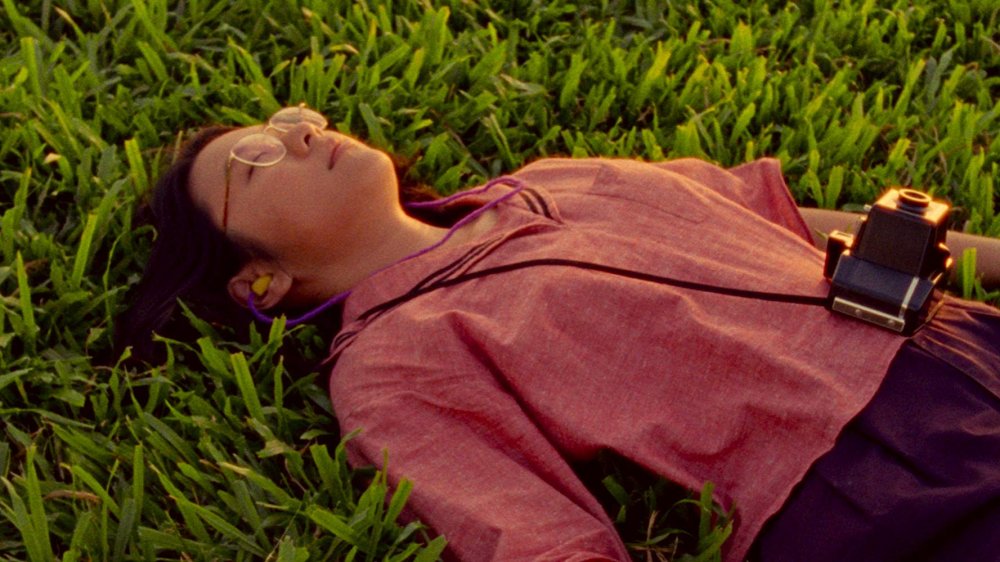 The summer was a frazzling blur of semiprofessional filmmaking, with Tan taking the lead role herself, as we see in the stylised footage, which absolutely has the kitschy downtown style already pioneered by John Waters and Jim Jarmusch and co-opted by legions of New Wave music-video directors, only with a distinctive Singaporean mealiness. Then the hammer falls: after Tan and the others return to college, leaving Cardona to handle post-production, he ceases communicating, mailing Tan only a few cryptic audio cassettes, and then vanishes altogether, with the 70 cans of unseen and unprocessed film. Years pass, and everyone’s dreams of the film ever being completed fade into bitterness. So, the new film, which leaps ahead a quarter of a century, when Tan (now a novelist in her forties living in LA) is summoned to reckon with the memory and betrayal of Shirkers after she gets a call from Cardona’s widow, asking if she wants the cans of film he had been secretly carrying around with him all that time.

Cardona, it seems, had a strange pattern of mentoring hungry young filmmakers, followed by sneaky post-production sabotage, as Tan’s investigative interviews reveal; he was also an inveterate liar, with a biography even his widow (called here, anonymously, ‘The Widow’) isn’t certain of. Tours through the New Orleans neighbourhood where he grew up never even land on an address with certainty, and a trip to Cardona’s mother’s house in an impoverished southern suburb finds only an empty, weed-filled lot. (This reminds Tan of Blow-Up’s empty park, one of many free-associative film-history detours.)

Although Tan’s doc can become weighed down with self-pitying narration and repetitive imagery, it’s also wide awake to her lost movie’s resonance, as film meta-history ellipsis (the early work can never be reconstructed because Cardona threw away all of the sound), as personal coming-of-age saga (us-versus-them sisterhood all the way, with scant attention paid to boys), and as “a time capsule of Singapore, both real and imagined”. She’s not simply talking herself up; the first Shirkers looks like what would’ve been a perfectly lovely, impetuous, endearingly jerry-built film of the era, rich with chintzy compositions and larky moments, and its absence from the culture of the time is a shame. 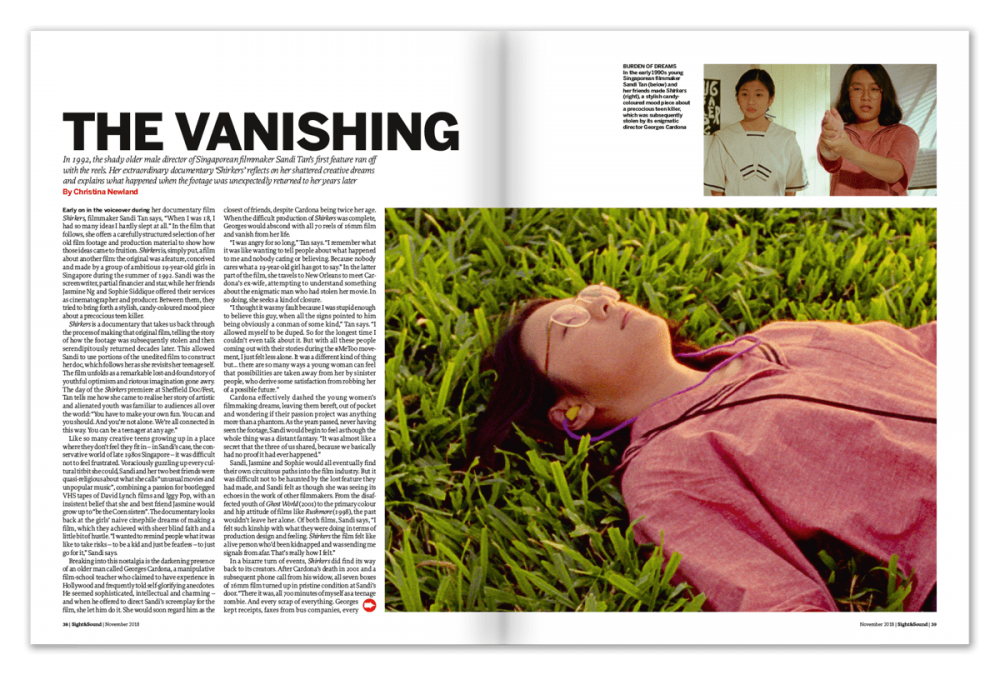 In 1992, the shady older male director of Singaporean filmmaker Sandi Tan’s first feature ran off with the reels. Her extraordinary documentary Shirkers reflects on her shattered creative dreams and explains what happened when the footage was unexpectedly returned to her years later. By Christina Newland.

Related to Film of the week: Shirkers is a true-life horror story for indie filmmakers