Life-or-death healthcare comes at a high price in a city where life can be stranger than fiction, as Luke Lorentzen’s gripping fly-on-the-wall documentary reveals. 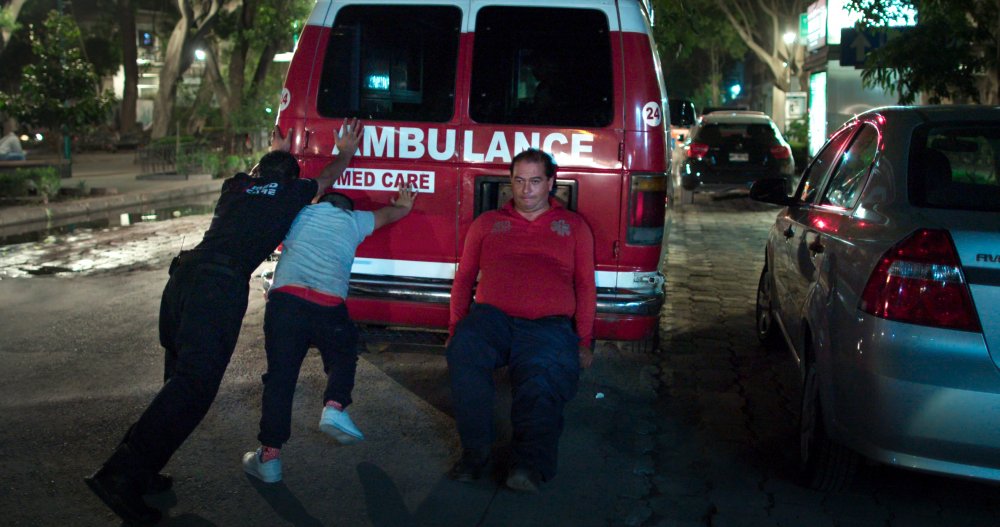 Mexico City is one of those places where day-to-day life often seems stranger than fiction – something that comes across very powerfully in this fascinating, disturbing, yet weirdly entertaining fly-on-the-wall documentary. If a filmmaker wanted to dramatise the crazy scenario revealed here, there would be absolutely no need for bells and whistles.

American Luke Lorentzen’s second doc feature opens with a caption stating that “a loose system of private ambulances has taken over much of the city’s emergency healthcare”. The need speaks for itself – without them, people would be dying on the streets. With them, however, the odds still feel pretty low. Lorentzen’s masterstroke is the prism through which he chooses to view this cowboy industry: the Ochoa family. Not only does he have himself a searing social issue, but a personable set of characters and a highly unusual spin on the tradition of the ‘family business’.

Shooting the film himself (he also served as producer and editor), Lorentzen spent six months driving around with the Ochoa family as they cruised the streets looking for patients, in a twisted reversal of ‘ambulance chasing’ – here, it’s the ambulance crews themselves who are in exploitational pursuit of trade.

The Ochoa team comprises father Fer, who appears to have his own health problems, barely says a word and defers in all things to his 17-year-old son Juan, the brains and dynamo of the operation. These two share driving duties and a novel form of traffic management, using a loudspeaker to divert other vehicles from their path with urgent commands such as, “Move to the left, we could be saving your family.” They’re accompanied by Manuel Hernández (possibly a relation), a kindly, conscientious soul who appears to offer most of the immediate medical attention. And then there’s Juan’s brother Josué, who’s aged nine or ten and simply along for the ride, playing by himself in the back of the ambulance. There’s no sign of women in their lives, other than the girlfriend on the other end of Juan’s cell phone, to whom he gives nightly reports of their escapades (“the craziest fractures I’ve ever seen”). The only discernible parenting that Josué receives is the instruction: “No school, no ambulance.”

The film exists almost entirely at night, in a city without its customary vividness – a result of the hour, but also of the camera’s focus inside the ambulance, or lingering in hospital corridors and car parks. At the same time, there’s a charged chaos in the air, created partly by the sense that we’re witnessing a distinctly amateur healthcare, and partly by the Wacky Races competitiveness of the rival ambulances, careering at high speed in a bid to be the first on the scene. With young Josué tossed about in the back, one wonders how Lorentzen can stay on his feet, let alone operate his camera.

They attend the usual assortment of casualties: car-crash victims, a teenage girl who’s been headbutted by her boyfriend, a woman who’s fallen four storeys from a building, a drug addict oblivious to the fact that his baby can’t breathe. Throughout, the Ochoas perform a balancing act between care and self-interest. If a patient is conscious, they ask them directly for payment; if not, then a family member on the scene, who will sometimes be openly contemptuous. Each exchange is a haggle, though the Ochoas have hearts: we see Fer accept a patient’s gratitude rather than cash; after another busy evening, Juan bemoans the fact that “we didn’t make a single peso”. With the police increasing the pressure – at one point Juan has to pay a bribe to avoid arrest – it’s no wonder the family are living hand-to-mouth: their apartment has no furniture, not even beds; each night they pool their pesos for fast food.

And so the grip of Lorentzen’s film is tightened as we see his subjects’ goodwill wilt under the pressure. There are clear signs that the Ochoas are taking their injured to private hospitals – which pay for patients – even when a state facility is closer; and in one instance, it does seem that the patient has died as a result. Suddenly, these engaging people leave a bitter taste in the mouth.

Lorentzen’s hands-off approach – no interviews, no voiceover narration, the only source of information provided by the camera-savvy Juan’s casual remarks – brings mixed results. Many questions remain frustratingly unanswered. Have the Ochoas received training? How much of their equipment can they actually operate? How legal are they? At the same time, the unmoderated, bruising immersion evokes the Wild West nature of this excuse for healthcare. Anyone who has a beef with the NHS should watch Midnight Family and count their blessings.