Panos Cosmatos’s follow-up to Beyond the Black Rainbow is a gloriously lurid mock-80s revenge quest that aims a raging, roaring Nicolas Cage at villains from another dimension. 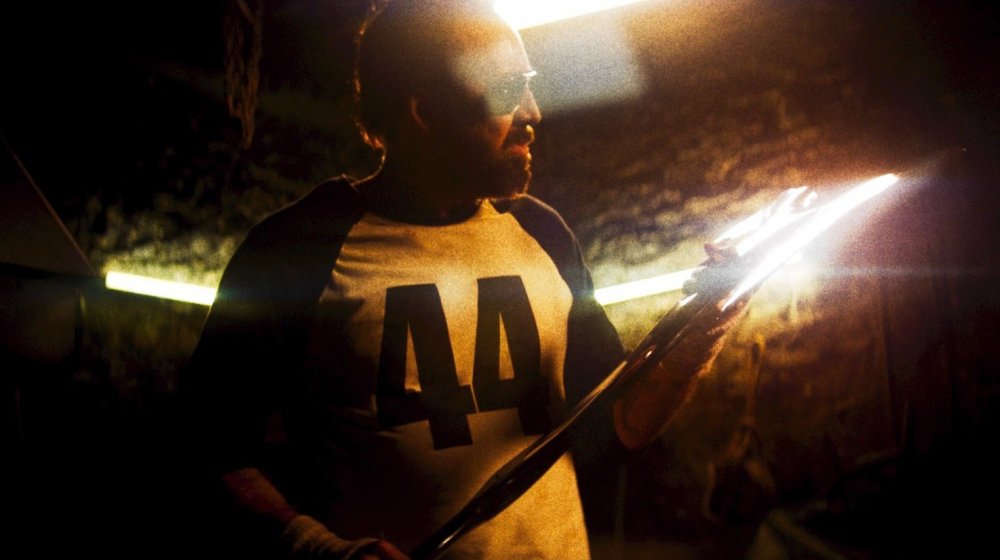 Nicolas Cage as Red in Mandy

Panos Cosmatos’s second feature after his skilful pastiche of 1970s sci-fi and horror Beyond the Black Rainbow, Mandy is a companion piece that roars with a fiery intensity as it pays loving tribute to 1980s heavy metal albums and gooey practical effects gore. Cosmatos’s duo of films would make a mighty midnight movie double-bill. They process the many different moods of grief and loss in their own unique ways, Beyond the Black Rainbow focusing on control of feelings while Mandy wades through anguish and the outpouring of pure, unfiltered emotion with wild abandon.

A man (the perfectly cast Nicolas Cage) seeks revenge for the murder of his beloved wife after a vicious cult leader orders his loyal followers to awake a trio of demon bikers to kidnap and kill her. That’s the simple premise and Cosmatos summons a hellish, nightmarish ambience that has the feel of a kid sneaking downstairs to watch late night TV, curiously flicking through the channels to find a fix. It’s shocking, thrilling and magical.

There’s something bad brewing, but first there’s real beauty in the way Cosmatos introduces the devoted couple, Red Miller and Mandy Bloom. It’s a slow-paced, peaceful and relaxed existence living in 1983 in an isolated cabin in the Pacific Northwest beside Crystal Lake. Andrea Riseborough, as the titular character, is a raven-haired rocker who spends her time drawing and reading fantasy novels. Red chops down trees for a living but his downtime is chatting and snuggling on the sofa watching shows with his loved one.

When unhinged ex-folk singer and leader of the Children of the Dawn cult Jeremiah Sand (Linus Roache) rolls into town and lays his eyes on Mandy, he decides he must have her. The LSD hangover from the 1970s has left a bitter aftertaste and Jeremiah’s evangelical speeches play out over trippy visuals, ear-piercingly loud music and beaming neon red light and smoke that coagulates and melds faces.

The late Icelandic composer Jóhann Jóhannsson’s synth-heavy score and otherworldly sound design purrs and rumbles with rage complementing Cage’s full-on descent into despair and the lair of sleazy, S&M cenobites. It’s like Hellraiser on acid with Cage setting his brand of wild-eyed mania to full throttle as the blood and guts start flying in a Dungeon & Dragons-style revenge quest.

On first realising Mandy is gone forever Red simultaneously drinks and pours vodka over his wounds, howling like an injured animal. Cage’s passionate writhing and screaming squeezes every drop of pain and humour out of this scene. Red continues to roll with the punches, heading to a trailer where Bill Duke is waiting with a crossbow, but that’s still not enough to defeat these extra-dimensional beings, so he welds himself a colossal silver axe too.