Divided into unequal halves, this self-conscious movie shadows a tough guy led astray by two mysterious women and culminates in an audacious extended 3D sequence filmed in one shot. 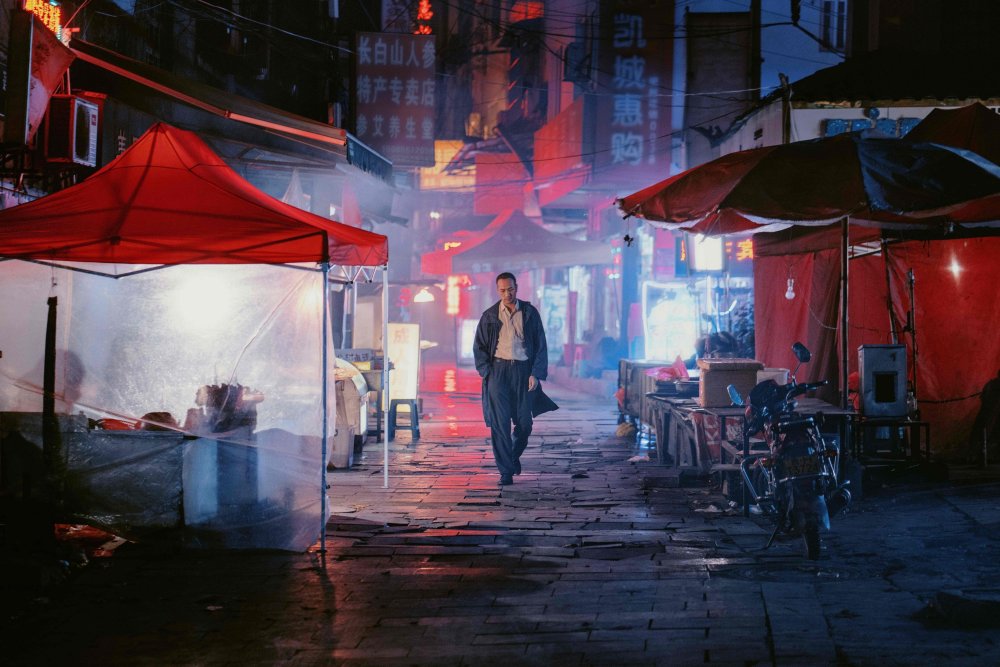 Boasting what must be a record-setting number of producers – and executive producers, associate producers and co-producers, not to mention foreign funding entities – Bi Gan’s second feature testifies to the impact made by his first, Kaili Blues (Lu Bian Ye Can, 2015). Both films were shot in and around his hometown Kaili in Guizhou province, but Kaili Blues was a low-budget indie made with a skeleton crew and Long Day’s Journey into Night had a crew of 200, three major stars, several notable cameo appearances and all those producers.

Despite the vast increase in scale and production values, though, the new film is an unapologetic ‘art movie’ with a self-consciously clever, show-off aesthetic. It notoriously ran foul of Chinese audiences at its year’s-end premiere (the Chinese title Di Qiu Zuihou de Yewan means The Last Night on Earth) because it was promoted as a romantic date movie. By the time the online backlash metastasised, it had grossed the equivalent of US$41 million.

Set at the turn of the millennium, Long Day’s Journey divides into two unequal parts – identified as First Stage and Second Stage in the end credits because they come from two distinct phases of production – the first fractured and digressive and the second an elaborate, hour-long sequence shot which unfolds in real time and is shown theatrically in retrofitted 3D. The first part charts a man’s return to his old hometown in summer, his dead-end search for a mystery woman and his tentative relationship with a femme fatale who may be leading him into danger; the second is a distorted mirror reflection of the first, this time set in mid-winter and drifting towards a romantic (but very tenuous) happy ending. The entire film is loaded with internal cross-references: recurring visual motifs and colours, repeated lines of dialogue, parallel backstories. And two lead actresses from the first part reappear in the second as different women. There’s a constant sense that just a few more concrete details would make things fall into place, but the first part keeps throwing curveballs in the form of interpolated scenes which can only be understood as imagined flashbacks or fantasy projections of possible futures, and the second part is explicitly framed as a reverie, powered by dream-logic.

In short, Bi Gan is hooked on enigmas and nothing ultimately coheres into a straightforward narrative. The one thing clear is that the protagonist Luo Hongwu (Huang Jue, entirely credible as an emotionally bruised hardman with a penchant for dreaming and/or chasing elusive women) spends the first part of the film stumbling through various film noir scenarios and the second part asleep at the movies. Cinema, in fact, looms very large in Bi Gan’s thinking, partly because he’s so interested in the way images are framed and the way that the medium can quicken or slow the flow of time and partly because he’s nicked so many ideas from films he likes.

Bi, a published poet from one of the minority ethnicities which China groups as the Miao, famously discovered cinema’s ‘alternative’ possibilities when he saw Tarkovsky’s Stalker (1979) while studying film in Taiyuan. There are no US-style ‘movie brats’ in China because no one of the present generation is nostalgic for the communist movies they grew up with, but Bi has learned a lot from Hitchcock’s Vertigo (1958) and film noir in general and obviously feels a great affinity with such Asian contemporaries as Hou Hsiao-hsien, Tsai Ming-liang, Apichatpong Weerasethakul and Wong Kar Wai. One of the most striking things about Long Day’s Journey is the number of Taiwanese talents involved, including the actors Sylvia Chang, Lee Hongchi and Tuan Chunhao.

Long Day’s Journey (which incidentally has nothing to do with Eugene O’Neill’s play; Bi simply liked the title) boils down to a Borges-like story about a divorced man obsessed with two unsolved mysteries from his past: he has potentially dangerous liaisons with two women (both with chequered, crime-related pasts, one of them apparently entirely imaginary) as he tries to uncover the identity of a mystery woman in an old photo and to find out exactly what happened to his late childhood friend Wildcat. The overall languor and the low-life milieux echo Hou Hsiao-hsien’s Goodbye South, Goodbye (1996), the use of musing voiceovers and disorienting time-slips echoes Wong Kar Wai’s Chungking Express (1994), the bipartite structure echoes several early Apichatpong movies, Tropical Malady (2004) in particular, and the staging of key scenes in derelict or waterlogged buildings echoes Tsai Ming-liang passim.

Luo’s edgy relationship with Wan Qiwen (Tang Wei), the former girlfriend of Wildcat who left him for the man who killed him, is re-enacted and revised in the film’s second part in his equally prickly relationship with the game-parlour manager Kaizhen (again, Tang Wei), though the dream version gives the liaison a precarious happy ending. The Borgesian notion that two different versions of a story can follow different forking paths obviously owes a lot to Tropical Malady, but Bi anchors it in Luo’s troubled consciousness – his desire for some kind of closure – rather than Apichatpong’s suggestion that a story may have hidden depths.

Sylvia Chang’s dual roles as Wildcat’s mother in the first part and in the second as a red-haired woman who has forced her lover to take to the road by burning down his house are less closely related than Tang Wei’s and consequently seem less integral. There are also loose threads in the imagery and plotting (the sudden appearance of a menacing snake in a glass tank comes to mind), but some rather tiresomely repeated business about a magic spell in a found notebook (it can make a house spin when recited) proves to be a shaggy-dog build-up to the dream climax of part two, when a burnt-out room does indeed spin around Luo and Kaizhen as they kiss – a sly homage to Vertigo.

The sequence shot that comprises part two is very likely the most ambitious and elaborate thing of its kind ever attempted: it opens on a mountain road, descends to a lower level via a rope-pulley arrangement and then magically ‘flies’ to a yet lower level, with complicated action and character-movement at every stage. No surprise that it took seven takes to get it right, with a month-long pause for rethinking and a change of cinematographer along the way. It’s the showiest element in a film with many show-off shots and it has tended to dominate the discussion; Dennis Lim’s Q&A with Bi after the New York Film Festival screening (available on YouTube) touches on little else.

In truth, Long Day’s Journey is a shadow of the film it might have been. There are too many not-very-relevant digressions, the cutting has eliminated entire swathes of the storyline (the excellent Lee Hongchi as the adult Wildcat appears in just two shots, in one of them as a corpse being tipped down a mineshaft, but reportedly shot much more), and the film achieves little emotional weight. But it’s nonetheless remarkable, and quite unlike anything else in modern Chinese cinema. Bi Gan hasn’t really thought through the implications of writing the main female characters as women promiscuously drawn to crims, but he gets by on his film noir stylings, his go-for-broke ambitions and his sheer chutzpah.