Daniel Craig plays the eccentric investigator determined to uncover the murderer of a wealthy patriarch in this inventive, witty comedy-thriller.

► Knives Out is now available to stream on BFI Player, Curzon Home Cinema, iTunes, Amazon, Google Play, Sky and Virgin, and to buy on DVD, Blu-ray and 4K UHD.

☞ Rian Johnson on Knives Out: “Agatha Christie had a modern sensibility” 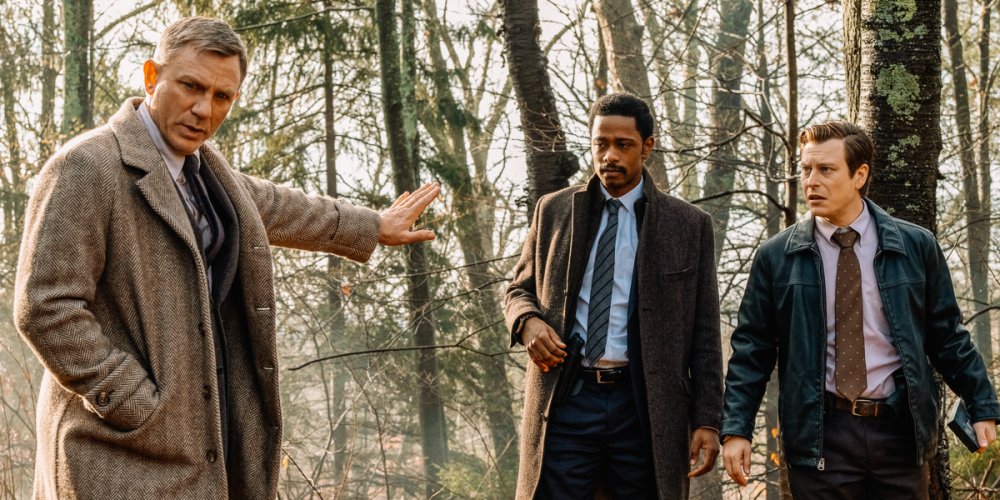 Rarer than a red squirrel, the country-house murder mystery has long been chased out of its one-time cinema habitat by the hardier thriller. What bliss then, to find writer-director Rian Johnson’s gloriously kinetic, whip-smart whodunnit reintroducing it with relish, as famous crime author Harlan Thrombey (a dextrous Christopher Plummer, seen only in flashback) is found with his throat cut en famille, after an 85th birthday party in the creaky Massachusetts mansion that’s worthy of a Cluedo board.

Putting a 21st-century spin on the ‘closed’ mystery, Johnson rapidly drops in Daniel Craig’s showily oracular Southern consulting detective Benoit Blanc, a sleuth so famous he’s been the subject of a New Yorker profile. Determined to follow up his police colleague Lieutenant Elliot’s suggestion that the death was suicide, he needles Harlan’s spoilt adult offspring in combative and darkly comic interviews, replete with the family’s testy privilege. Fast, funny and playful from the off, the film layers this official questioning in sharp slivers, with sly flashbacks filleted from the patriarch’s quarrel-filled party and its aftermath, establishing the story’s timeline, suspects, alibis and concealed motives with elegant economy. Against the unvarnished truth of these flashbacks, the Thrombeys’ lies, grudges and inconvenient infidelities sidle into view. Cinematographer Steve Yedlin’s whip pans and tracking shots snake through the party flashbacks, giving the viewer an up-close but off-kilter view of events.

Once the game is afoot (Blanc is fond of Sherlockian allusions), the story’s POV zigzags from ‘whodunnit’ to ‘howdunnit’ and even that old Columbo favourite ‘howcatchem’. Intriguingly, it then slides into a tense but teasing thriller mode that jinks and weaves, confounding the viewer repeatedly while still respecting the key rules of the genre. Harking back to the high-society big-screen Agatha Christie adaptations of the 1970s, such as Murder on the Orient Express (1974) and Death on the Nile (1978), Johnson’s clever scripting, evocative location and all-star cast retain the classic murder mystery’s plush, ludic pleasures. But the film is resolutely contemporary not only in its setting but also in its switchback plotting, social commentary and winking wit. Revitalising rather than venerating the ‘closed’ mystery, it’s in marked contrast to Kenneth Branagh’s handsome if reverential period-perfect remake of Murder on the Orient Express.

Though Johnson is a serial genre-bender, who combined hardboiled noir with high-school movie in Brick (2005), melded time travel and mob thriller in Looper (2012) and woke up the white-male-hero template of Star Wars with The Last Jedi (2017), he retools the mystery’s staple elements with an evident affection for its classic tropes, right down to the shock-packed will reading (Frank Oz’s harassed lawyer is a small but significant delight here) and the family gathering in the library for the fiendish final reveal. The film is not averse to a spot of postmodern comedy thriller pillaging either. There’s a hint of Sidney Lumet’s Deathtrap (1982) in its knowing asides, though Johnson keeps his metafiction usage down to nods and winks – a flash of Murder, She Wrote in Spanish on the TV – rather than wholesale subversion. More importantly, there’s a fine homage to the house of games from Sleuth (1972) in production designer David Crank’s panelled, antiques-packed mansion, a heavily symbolic location that Knives Out establishes as a fiercely contested ancestral birthright, a knife-decorated temple to Harlan’s cunning crime fiction, a secret-window-sporting crime scene and a deeply divided family home.

This turns out to be a smart move, one that prevents the movie becoming a brittle game of pick-out-the-posh-perpetrator but still keeps you questioning Marta’s motives, as she is reluctantly enrolled as the Watson to Blanc’s Sherlock. A kind-hearted outsider with her own secrets, she’s the focus of the film’s spiky social commentary, as the vexed issue of immigration and ‘caged kids’ rages through the Thrombeys’ liberals-versus-MAGAs Trump-era arguments. She is assured that she’s one of the family, yet the film’s running gag is the Thrombeys’ inability to remember where her family comes from, with guesses ranging from Uruguay and Paraguay to Brazil. The question of who gets to ‘belong’ in the house, and in today’s America, puts a topical spin on the upstairs-downstairs tensions of the classic mystery, an updating of the cross-class betrayals of Gosford Park (2001). Far more than ‘woke’ window dressing, entitlement and white privilege become a central theme, as Blanc’s circling investigation (“Ah have eeliminayted no suspects”) and Harlan’s post-death surprises fray nerves all round.

Perhaps what feels most modern about Knives Out is the torque and speed of its mystery plot. Propelled by a nimble succession of twists, rebounding off sabotage, punishment, blackmail, arson, double crossing and “the dumbest car chase ever”, the story is frankly convoluted but still devilishly clever. Never taking itself too seriously, the film is above all tremendous fun, balancing comedy and mystery with brio. It revels in the chance to have clean-cut Chris ‘Captain America’ Evans gleefully order a roomful of grieving relatives to “eat shit”, and to make an involuntary lie-triggered vomit reflex turn one of the suspects into a veritable puking Pinocchio. Composer (and cousin) Nathan Johnson’s merry, string-filled orchestral soundtrack keeps the mood lively, though it doesn’t have the arresting originality of his work for Brick.

The witty, self-aware dialogue (such as cocky Ransom dubbing the Foghorn Leghorn-voiced Blanc “CSI: KFC”) gilds the family gatherings. The biggest revelation of all, however, is Daniel Craig’s hitherto hidden ability as a light comedian. Garrulous, grandstanding and faintly mystical about his deductive process (“I anticipate the terminus of gravity’s rainbow”), his enjoyably eccentric Blanc is far from the terse chill of his Bond persona or the hillbilly wildness he unleashed for 2017’s Logan Lucky. Relentless but oddly kind with it, this self-styled “last of the gentleman sleuths” relies on deduction rather than hi-tech forensics in a way that rekindles the puzzle-solving viewer pleasures of the past. In an era when even the star-studded, well-crafted mid-budget original movie is an endangered species in Hollywood, Johnson has pulled off a crowd-pleaser that revives a faded genre and a failing market at one fell swoop.

Related to Knives Out review: Rian Johnson revives the whodunnit with crowd-pleasing panache