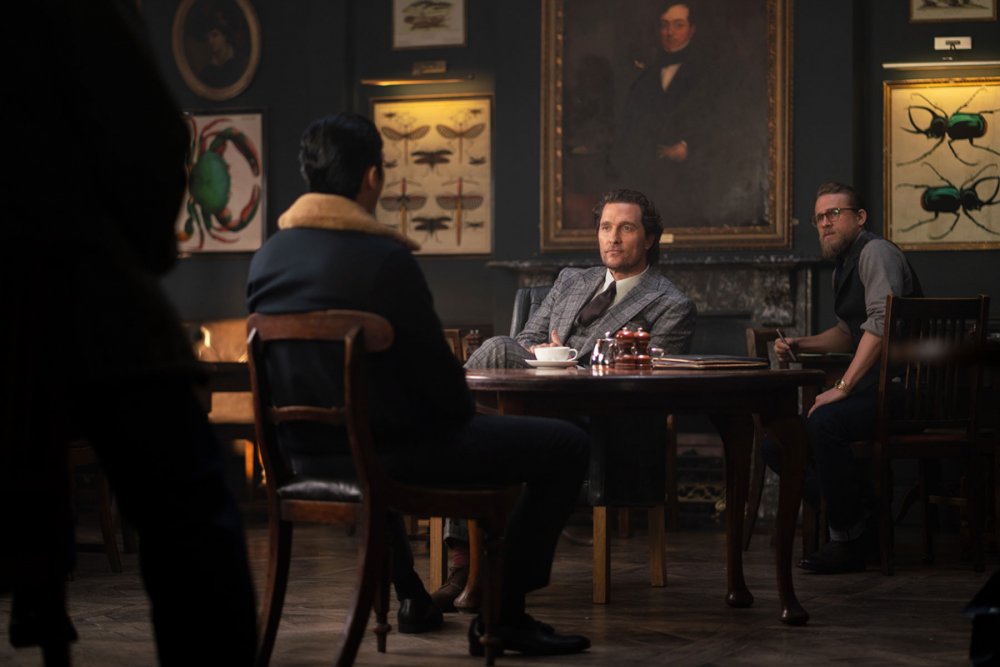 Writer-director Guy Ritchie has often been criticised for the ‘mockney’ miscreants who inhabit his early features Lock, Stock and Two Smoking Barrels (1998), Snatch (2000), Revolver (2005) and RocknRolla (2008) – a motley ensemble whose Britishness, Englishness, even Londonishness, is a highly artificial construct, and whose pacy, crisscrossing japes owe more of a debt to the polydiegetic involutions of Quentin Tarantino than to the real (if not quite legitimate) machinations of the metropolitan criminal fraternity.

It seems likely that Ritchie himself would happily own these charges of inauthenticity. After all, in Snatch he improbably (but brilliantly) cast Brad Pitt as an Irish ‘pikey’, and in Revolver he made London’s underbelly a labyrinthine stage for metaphysics and mysticism. In all these films, and arguably also in his Sherlock Holmes (2009), Sherlock Holmes: A Game of Shadows (2011) and even King Arthur: Legend of the Sword (2017), Ritchie is taking a mythological approach to Britishness and its icons. This is also true of his latest, The Gentlemen, which returns to the sense and sensibilities of his earliest features, while constantly reminding the viewer of its status as legend by presenting its events as a movie script.

Hired by a vengeance-seeking newspaper editor (Eddie Marsan) to dish dirt on American expatriate and drug lord Mickey Pearson (Matthew McConaughey), disreputable detective Fletcher (Hugh Grant) has been following Mickey’s gang for weeks as they negotiate the sale of their extensive marijuana empire to double-dealing Oklahoma billionaire Matthew Berger (Jeremy Strong). As internally squabbling Chinese gangsters, vengeful Russian mobsters, cash-strapped aristocrats and high-kicking, YouTubing chancers (trained by Colin Farrell’s Coach) all become embroiled in a plot that rapidly spirals out of control, Fletcher presents his observations to Mickey’s lieutenant Raymond (Charlie Hunnam) in the form of a screenplay, which he hopes both to use for blackmail and to sell to a movie studio.

Yet the screenplay’s cinematic retelling of what has happened so far, presented via Fletcher’s scurrilously hyperbolic narration/pitch to Raymond (playing sharp-eyed script editor), will turn out not to be the full picture, in a crime film that includes its own commentary track, making-of material and alternative takes. This metacinematic frame overtly highlights the artifice of what we are seeing, while matching in narrative terms the sophistication of (some of) the players.

We know that Mickey will die in the end, taken out in his own local by an assassin, because it is with this scene that The Gentlemen opens, launching us in medias res. Yet this is a film full of smoke and mirrors, dexterous manipulations, mistaken perceptions and dumb luck, in which Fletcher’s script requires a certain reading between the lines, Ritchie’s careful parcelling out of – and stylised cutting away from – key visual information invites imagination and ambiguity, and (half-)seeing is not always believing. If at first this seems set in a man’s world of aggressive Darwinian machismo, that impression is offset by the range of sexualities on display (Fletcher’s pitch to Raymond is as much flirtation as extortion) and by Mickey’s formidable other half Rosalind (Michelle Dockery), who on principle has staffed her motor shop almost exclusively with female employees.

Set in a multicultural London, The Gentlemen boasts a tea-drinking, tweed-wearing Yankee, more English than the English, whose hard-won assimilation, even respectability, remains tainted by his murderous past. The film does not so much lionise Mickey as use him to expose the flaws in the British society that accommodates him: a landed gentry all too ready to sell out, a fourth estate desperate to be recognised by the big boys, and amorally rapacious newcomers. And so this ironically titled film defines its characters’ gentlemanliness largely in negative, or reduces it to an issue of style, as witty, well-groomed, wife-loving Mickey and his associates outclass all the other thugs. It is a coarse, convoluted, comical caper that exults in the joys of genre.