For Sama review: a mother-and-daughter’s-eye view of the devastation of Aleppo

Waad al-Kateab’s first (and second)-person testament to life and love in defiance of the would-be annihilation of her Syrian home town is a stirring cry of pain and protest. 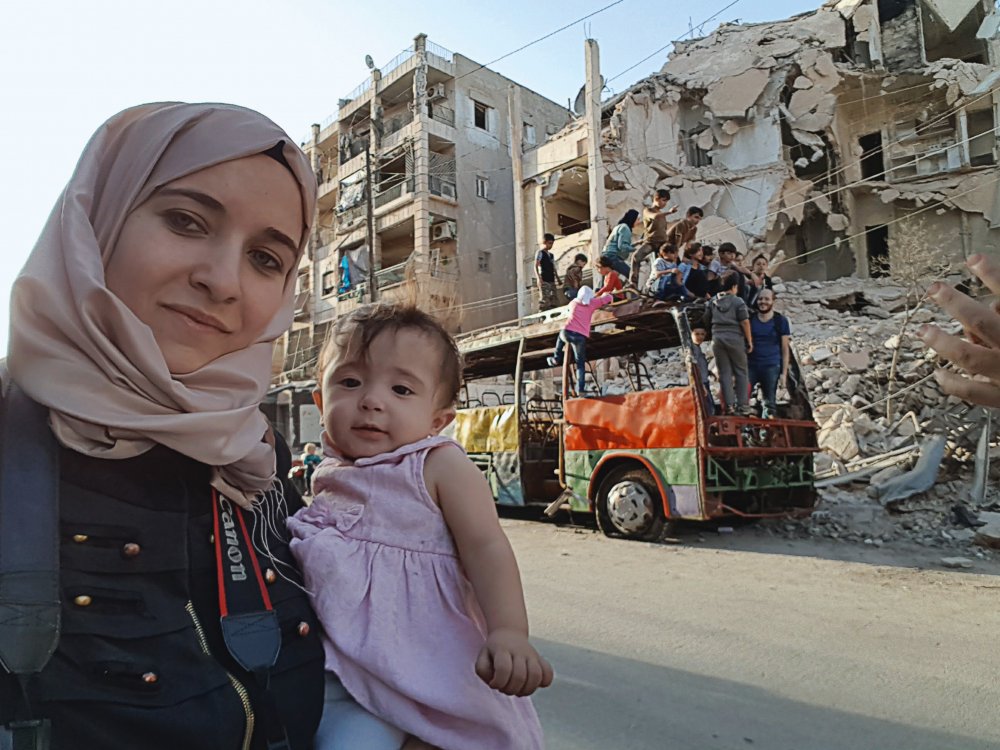 Waad al-Kateab and Sama in For Sama

Eight years after civil war broke out in Syria, and with much of the country reduced to rubble, the outpouring of pain and protest continues to be felt in a slew of arresting and affecting films, both fictional (such as Philippe Van Leeuw’s Insyriated) and factual (including Talal Derki’s Oscar-nominated Of Fathers and Sons and Evgeny Afineevsky’s Cries from Syria – all 2017).

Now former Aleppo resident and self-taught video journalist Waad al-Kateab adds her voice to the growing throng with For Sama, one of the most powerful and essential films to come out of the country in recent years. Co-directed with Emmy-winning filmmaker Edward Watts, it’s a first-person account of exactly what it means to live smack-bang in the middle of an active war zone. Told squarely from a female perspective, it also offers a viewpoint rarely seen in films about conflict.

This comes predominantly from Waad herself, who in 2011 was studying for a business degree – a freedom already hard won from her traditional parents – when protests against the dictatorship of Bashar al-Assad began sweeping across Aleppo. Picking up a camera initially to document her fellow students daubing protest messages on the campus walls, she continued to film as Arab Spring optimism descended into violent chaos, the regime fighting back against protesters in the most heinous of ways. 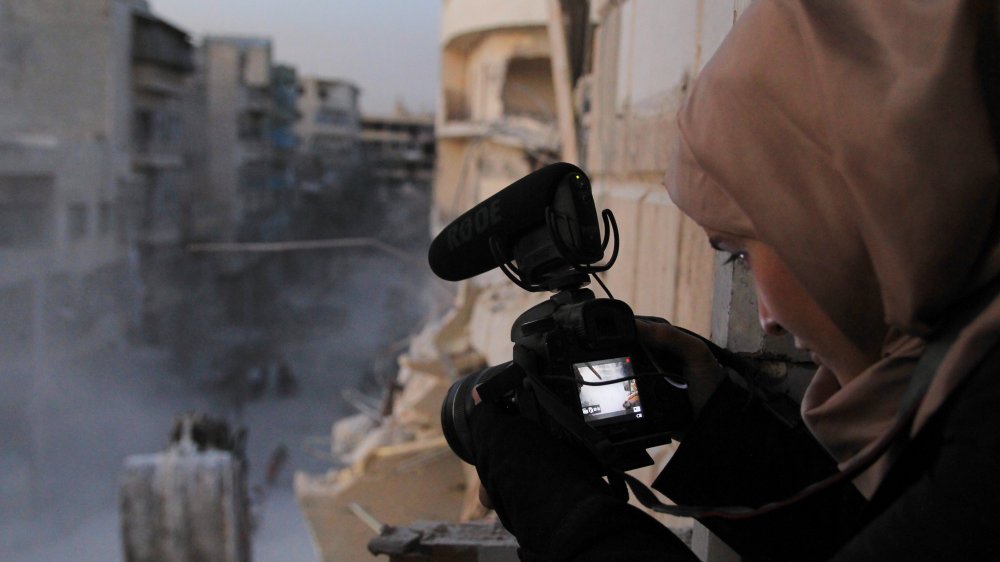 Her ever-present camera watches, unflinchingly, as events unfold over the course of the following four years, and Aleppo becomes a place of nightmarish daily violence. Yet Waad resolutely stays in the city. She is at first gripped by the promise of true revolution; then, when she falls for and marries doctor Hamza, she stays for love; and, finally, she is seized by a determination to help her beloved city in its time of absolute crisis.

As the footage jumps backwards and forwards in time, taking in the beginnings of the war in 2011 and the subsequent intensifying atrocities, accomplished editing by Chloë Lambourne and Simon McMahon brings both narrative drive and cohesion, without ever detracting from or labouring the scenes playing out before us. And so, like Waad, we bear often claustrophobic witness to traumas that, at times, are unbearable. Two young boys bring the body of their brother to the hospital, killed by shelling while they were playing at their home and unable to be saved despite the best efforts of Hamza and the medical team. When Waad begins to sob, Hamza tells her to remove herself; there is simply no room for emotion when working under such conditions. His grief, of course, comes later; the impact on both Waad and Hamza, who lose several friends and colleagues during the course of filming, is seismic. 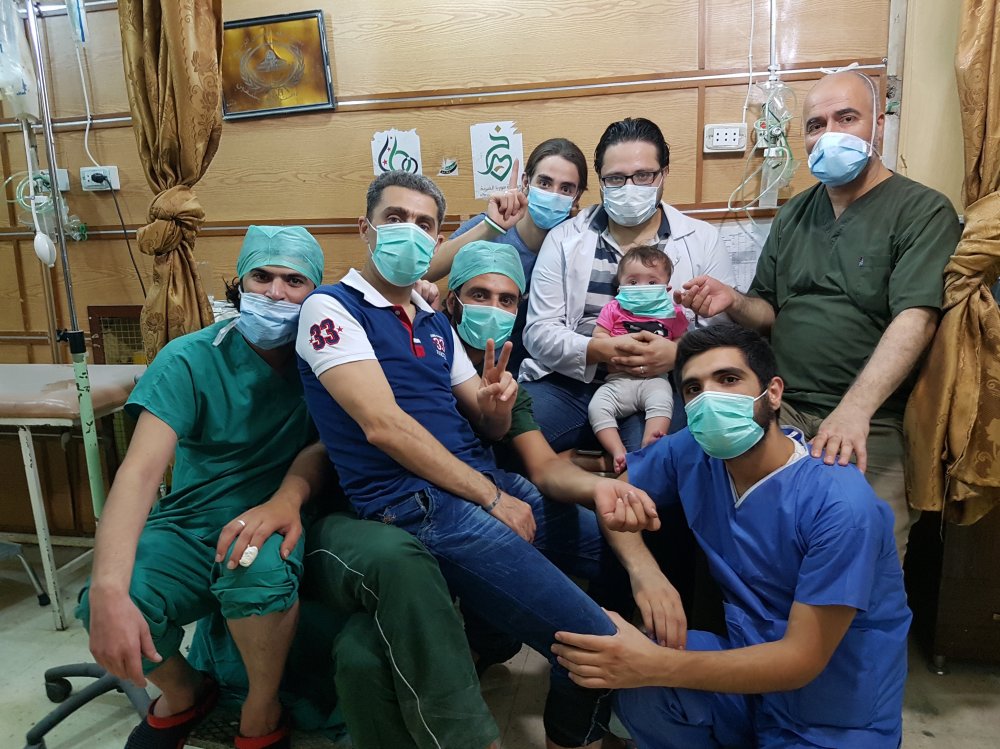 This real-world horror is further brought home by the fact that, throughout, Waad overlays her journalistic images with an intimate voiceover, detailing her own experiences, thoughts and feelings. Poignantly, this narration is constructed as a letter to her daughter Sama, who was born during her parents’ final months in Aleppo, to the sound of bombs and shelling. The fact that, as an infant, Sama remains completely unfazed by the cacophony of war, sleeping through the nightly onslaught and giggling as her parents run with her for cover, speaks volumes about how the very young can come to regard such conflict as normal life.

Yet, as her parents attempt to make a life for her in the city’s one remaining hospital amid all the death and destruction, a handful of toys scattered around their small room, it’s also a reminder that, in times of conflict, life marches defiantly on. A plant cutting, taken from Waad and Hamza’s garden when they were forced to flee their bombed home, becomes a poignant symbol of human tenacity and optimism. Other flashes of hope pierce the darkness: footage of Hamza and Waad’s joyful wedding; Hamza playing peek-a-boo with Sama during one of their frequent trips to the hospital basement to escape the missiles; a seemingly stillborn baby, born to a wounded mother, brought back to life by the medical team’s unrelenting efforts. 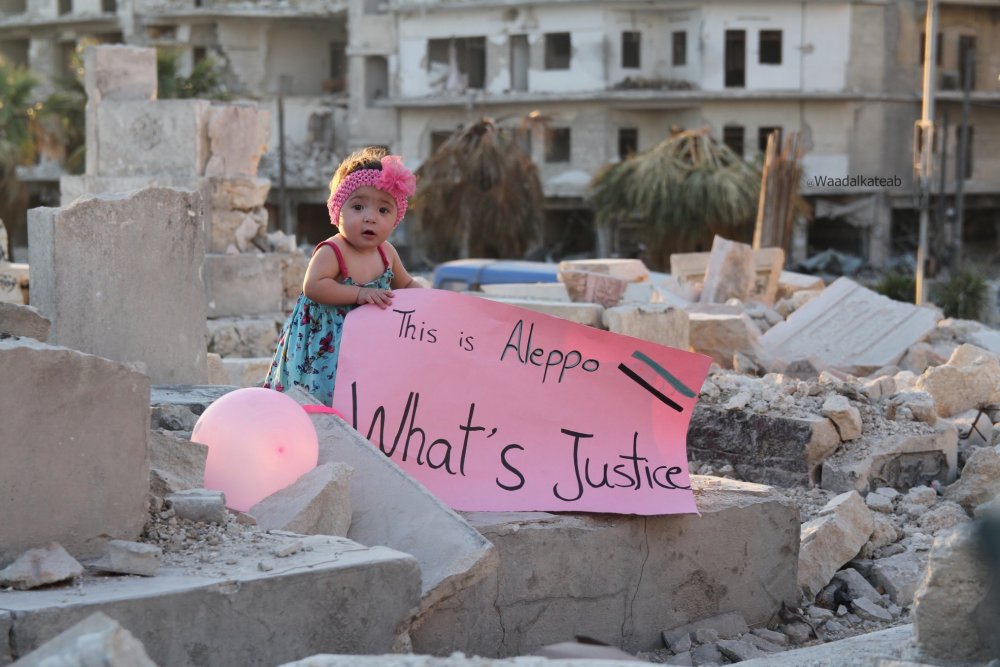 These are, however, brief moments of escape from the never-ending onslaught, which, finally, forces Waad and Hamza to leave their beloved country in 2016 in search of safety (Waad now works as a filmmaker for Channel 4). It’s a difficult decision for Waad, who is torn between her responsibilities as a mother and her loyalty to a country – and a cause – that she truly believes in. That internal battle comes through in her narration, recorded after Sama’s birth. While her tone is measured and, often, weary, it nevertheless reverberates with the anger and injustice of the intolerable situation that she and other ordinary people like her have found themselves in through no fault of their own. “We never thought the world would let this happen,” she states, a personal lament that strikes a powerful, gut-wrenching chord.

Indeed, the events depicted in For Sama are so appalling, so hellish, that it is tempting to look away, to pretend it’s not happening. But we owe it to Waad, and so many others like her, not only to give it our full attention, but to scream its humanitarian message from the rooftops. 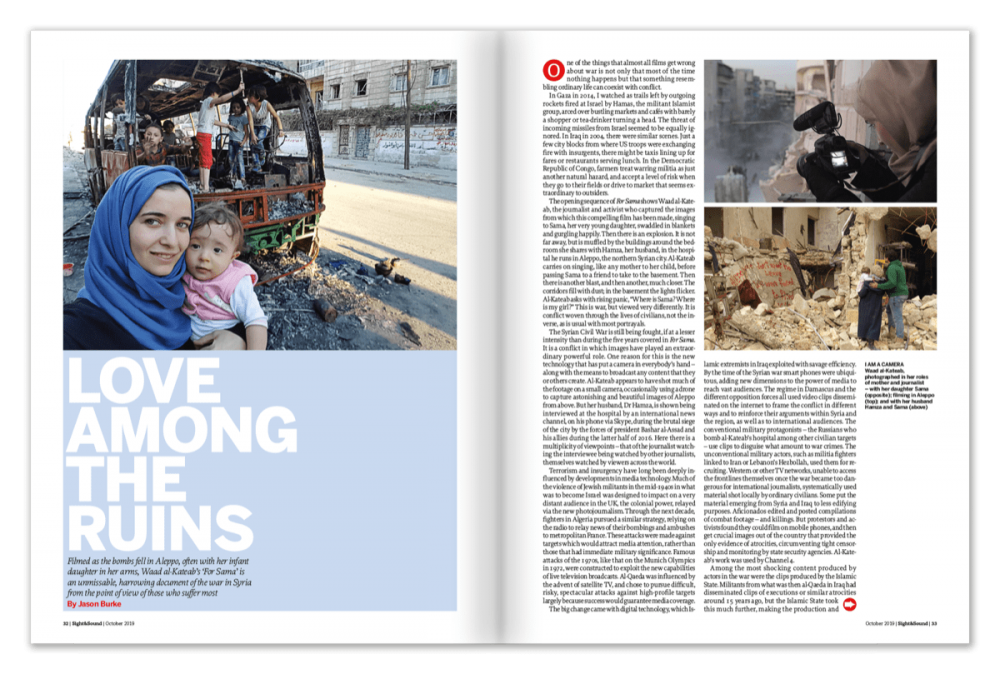 Love among the ruins

Filmed as the bombs fell in Aleppo, often with her infant daughter in her arms, Waad al-Kateab’s For Sama is an unmissable, harrowing document of the war in Syria from the point of view of those who suffer most. By Jason Burke.

+ “Every minute was important”

Waad al-Kateab discusses the perils of filming inside Aleppo and why she feared every day might be her last, while British co-director Edward Watts explains his part in the making. By Isabel Stevens.