A man returns home to his mother’s farm after serving time for setting a local fire – but is he a pyromanic or simply a scapegoat? 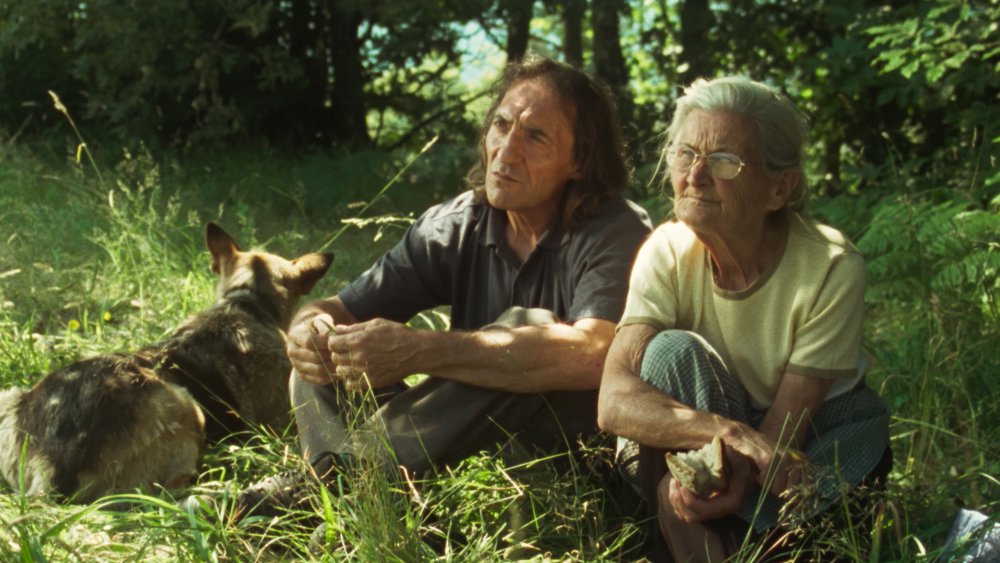 Set in the mountains of Galicia, in northwestern Spain, Oliver Laxe’s Fire Will Come is a truly elemental film – certainly in so far as the traditional four elements are all strongly represented. Water figures in heavy rainfall and in the scene where middle-aged protagonist Amador unblocks a spring above his village; earth features in the shots of the region’s heavily forested valleys; and air in the rolling mist and cloud-filled expanses of the first section, set in winter.

As for fire, the drama culminates in a sequence of some 13 minutes in which firefighters combat a blaze that has broken out on Amador’s mountain. Amador himself embodies fire: at the beginning of the film, he returns home to his mother’s small farm, after two years in prison for starting a blaze that engulfed a mountainside. The first time he is mentioned, by an official handling his parole, he is referred to as “the pyromaniac”.

Whether Amador really is a pyromaniac – and whether in any case that label can possibly sum up who he is – is one of the mysteries of this sparely suggestive film. Fire Will Come marks a homecoming for Laxe as well as for his protagonist: the French-born Spanish director shot his third feature in the village of his grandparents, and in the Galician language, after making two films – the quasi-documentary You Are All Captains (2010) and the mystically inflected quest/travelogue Mimosas (2016) – in Morocco. Once again, Laxe is working with non-professional actors who appear to some degree to be versions of their characters (indeed, they share the same first names).

Like Mimosas, Fire Will Come is a portrait of a very particular landscape. But this film’s terrain is not possessed of conventional visual appeal: in the opening winter section, Laxe and DP Mauro Herce, shooting on Super 16, emphasise the overcast drabness of the mountains’ muted greens and browns, with people tending to disappear into the land. In one sequence, Amador’s elderly mother Benedicta crosses a wood, almost entirely vanishing in the dense textures of the image before being seen sheltering from the rain inside a tree trunk. Unlike Terrence Malick’s A Hidden Life (2019), in which every shot of the Austrian Alps whacks us over the head with its spiritual glory, there is no transcendence in the stark milieu of Laxe’s film: this is simply a world in which people slog to survive, attending to the daily business of rural life, whether that involves heaving a stray cow out of a mud pool, hacking away the brambles that have consumed an old house or combating the flames that regularly consume swathes of these mountains. 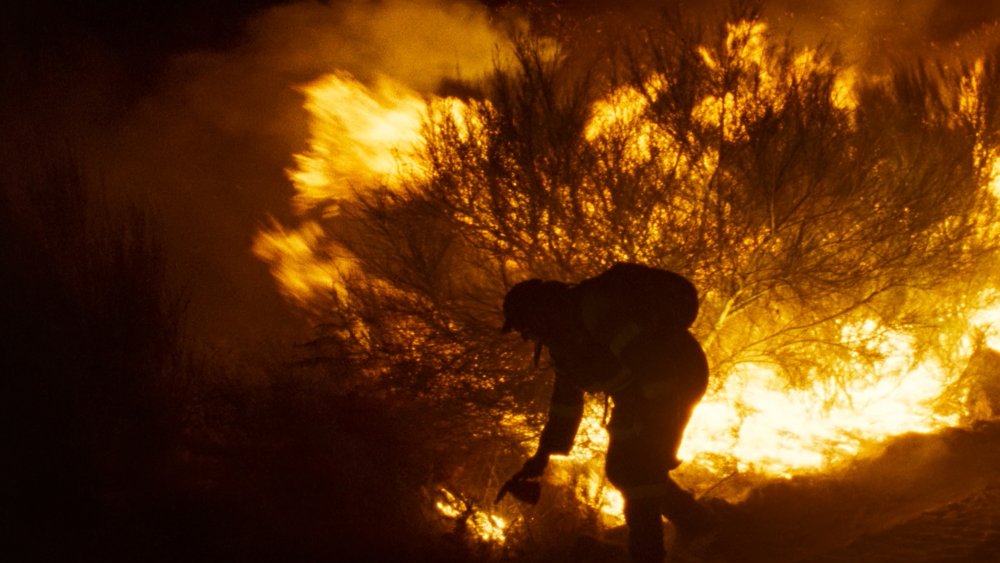 The film is clearly timely in this moment of ecological anxiety, the perils of the Galician environment chiming with the recent wildfires in California and Australia. The film shows a landscape struggling with threats to its survival, among them the imported eucalyptus trees that flourish in these mountains – Amador complains about them putting down dense roots, strangling local plants, being “worse than the devil”.

Benedicta, however, sees things in more metaphorical terms, calmly replying, “If they hurt others, it’s because they hurt too” – an observation that clearly doesn’t apply only to trees. The same can be said of the film’s title: while Fire Will Come suggests a prophecy or a threat, the Galician O que arde simply means “that which burns”, which could be taken as referring both to the landscape and to humanity.

If Amador burns, it is on the inside. Amador Arias’s solemn, laconic performance reveals little of what his character is, or of what consumes him; his stony mien recalls Valeska Grisebach’s Western (2017), which was also about strong, undemonstrative men in a landscape, and was similarly cast with non-professionals.

But another source of fire in the film is domestic: the stove kept stoked in Benedicta’s home. Like the stove, Benedicta herself radiates quiet, firm devotion to her son; you almost chuckle at the no-nonsense brevity of her greeting after his two years’ absence (“Are you hungry?”). But images of their togetherness, especially at the end, suggest a mutual dedication that is arguably the film’s central heat source. 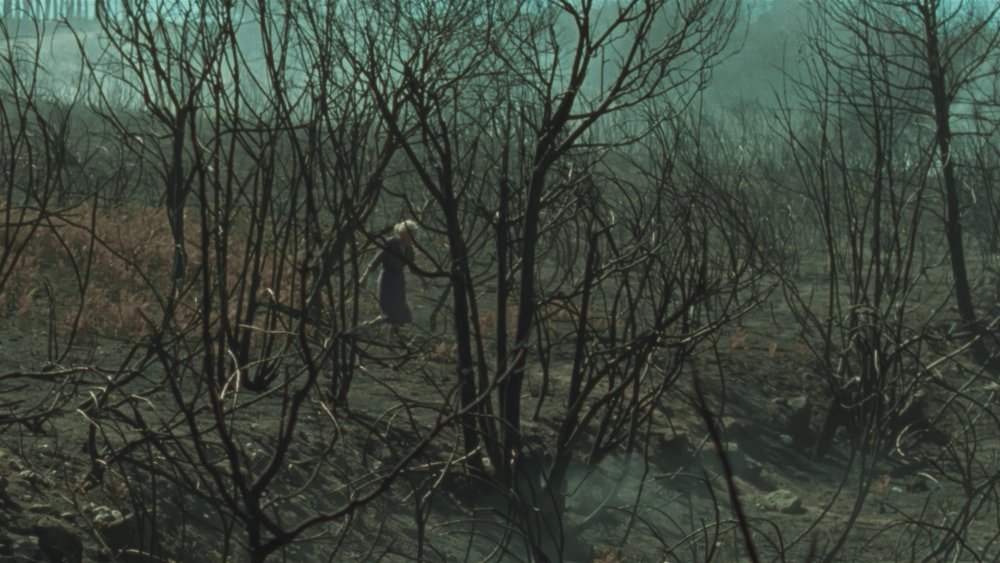 By contrast with the more overtly enigmatic narrative of Mimosas, Laxe has here made a film of resonant gaps rather than mysteries as such. We can’t be sure that, despite his jail term, Amador has even really been guilty of anything – it may simply be that he is a loner, a perennial outsider, and therefore fated to be a scapegoat. Certainly, nothing directly implicates him in the latest conflagration: a major narrative elision sets in after a brief scene in which Amador starts a conversation in a bar with Elena, the vet with whom he earlier shared a moment of tentative intimacy, listening to Leonard Cohen’s Suzanne as she drives his wounded cow for treatment.

Despite being largely in a mode of gaunt, unvarnished realism, Fire Will Come is bookended with sequences of dreamlike eeriness. Quite apart from the spectacular fire itself, with its walls of red flame, there is the blasted aftermath the following morning: Benedicta picking her way across a grey field of charred trees, the appearance of a confused, badly burned horse. The opening sequence has a touch of horror-cinema ominousness: trees crash to the ground in a forest at night, before we see bulldozers ploughing them down, then a single eucalyptus, its scarred trunk filling the screen with a baleful solidity. The enigmatic nature of these images is underpinned by the long, foghorn-like notes of the trombone concerto by modern composer Georg Friedrich Haas (for the moments of more human drama, it’s Vivaldi’s mournful Cum dederit).

As for the Suzanne sequence – with the camera and the cow exchanging a long placid gaze – this is one of the strangest uses of a Cohen song in cinema. Elena tells Amador, “No need to understand the lyrics to get the music” – which seems a neat comment on the subsidiary role played by spoken language in this drama of place and gesture. But Laxe then cuts to a shot of the house that villager Inazio is restoring, and it is tempting to think of it being “the lonely wooden tower” referred to in the song. You might make the same connection with Amador himself, as lofty, as solitary and perhaps – although he survives his ordeals – deep down, secretly as combustible.