Film of the week: Cemetery of Splendour

Things to do in Thailand when you’re in purgatory: Apichatpong Weerasethakul’s latest takes the pulse of a sleep-sick nation.

☞ Perchance to dream: a long night with Apichatpong’s shorts

Probably the closest Apichatpong Weerasethakul will ever come to a state-of-the-nation report on Thailand, Cemetery of Splendour starts in what feels like a realist mode – its reality centres on an apparently incurable sleeping sickness – and escalates at the mid-point into a kind of phantasmagoria, signalled by cyclical changes in the colour of lights. This shift from the broadly realistic into the overtly fantastical has obvious roots in the two-part structures of Apichatpong’s early films, from Mysterious Object at Noon (2000) to Syndromes and a Century (2006), but this time there’s no sense of one part commenting on or revising the other. Here the shift serves to intensify the current of nightmare which has been there from the start. You could think of it as Apichatpong’s answer to The Shining.

It’s not accidental that the shift occurs during a visit to a cinema. Jen (Jenjira Pongpas Widner, a central, poignantly disabled figure in Apichatpong’s films and installations for the past decade) came to the north-eastern town of Khon Kaen to visit her friend Tet, a nurse, and found her tending to wards of serving soldiers who had succumbed to an epidemic of narcolepsy. She stayed on as a volunteer to help one patient who was never visited by relatives, a soldier named Itt (Banlop Lomnoi, the soldier in Tropical Malady). Seemingly as a direct result of her care, Itt periodically revived and was able to have conversations and meals with her before relapsing.

Once this has happened a few times, Jen ambitiously invites Itt to leave the hospital with her for a meal in the night market and a visit to the movies. They sit in a not very crowded multiplex cinema watching the trailer for a typically lurid Thai horror film (Phyungvet Phyakul’s The Iron Coffin Killer) and then stand for the expected national anthem. (A short montage of the currently reigning King Bhumipol’s good works is always played in Thai cinemas before the main feature, accompanied by the national anthem; patrons are mandated to stand.)

On this occasion, though, the cinemagoers stand in darkness and silence. Apichatpong cuts to a long-held shot of two ceiling fans as the light playing on them goes through a cycle of colour changes. We next see Itt, who has relapsed again, being carried down the escalators of the glitzy shopping mall beneath the cinema – and very slowly mix to a night shot of the hospital ward he came from. We’ve already seen light-tubes installed beside each bed, bathing the narcoleptic soldiers in azure light, an experimental psycho-therapeutic remedy for their condition. These light-tubes now also start displaying a colour-cycle: azure, pink, peppermint green, blood red. The colour-cycles dominate the entire second part of the film. 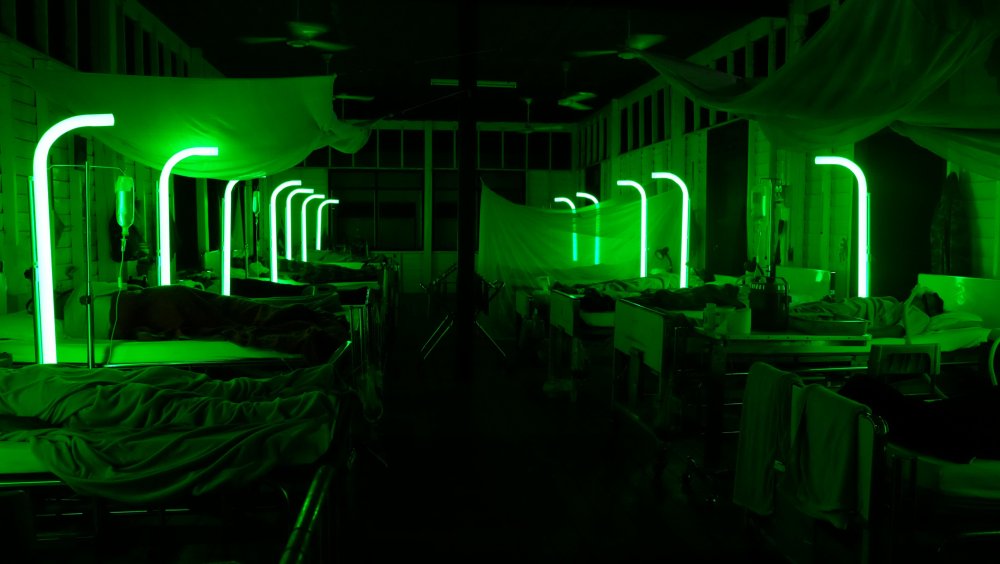 It’s Jen’s experiences that give the film its overall arc. The story opens with her arrival in Khon Kaen and her exploration of the makeshift hospital as she searches for the friend, nurse Tet, who has brought her to the town. The first thing established as they talk is that Tet’s earlier prescription of a medicinal cream for Jen’s damaged leg hasn’t helped: it had superficial effects but “didn’t reach the bones”.

Jen goes on to have interesting and illuminating conversations with various people, living and dead – the psychic Keng who recalls her past life as a boy who died falling from a tree, the librarian who is a holdover from the building’s past life as a school, two Laotian princess-goddesses – but the key event during her stay is her ‘adoption’ of the narcoleptic soldier Itt. During his limited periods of wakefulness, Itt becomes her surrogate son. Their conversations are exactly what you’d expect from new acquaintances: where are you from? How’s your competence in other Thai dialects? What are your hopes and dreams? Itt explains that he wants to quit the army (he’s done little more than wash his general’s car) to run a street-food stall; Jen’s profound despair springs from learning that Itt will never recover. She ends the film fully awake and wide-eyed, aghast at her realisation that things will never get better.

Jen’s trajectory is from innocence to experience – the reference to William Blake is not made in the film but is entirely appropriate – but it doesn’t turn the film into a political allegory. The offscreen reality is that Thailand remains a constitutional monarchy, with a much-loved but elderly and infirm king and a looming problem of succession, but is currently governed by a military junta which seized power to suppress the political chaos ushered in by former premier Thaksin Shinawatra, now in exile. Certain human rights have been curtailed, opposition has been silenced (Apichatpong quietly alludes to the death of a real-life political prisoner in one of the entries in Itt’s journal) and there are still outbreaks of shocking, murderous violence. The only direct references to military dictatorship in the film are the occasional glimpses of murals and statues of Sarit Thanarat, an army field marshal who staged a coup in 1957 and ruled with still-hated malignance; Apichatpong says he was startled to find them in situ in Khon Kaen, where Sarit – like the civilian Thaksin more recently – lavished money on the rural constituency to bolster his support. 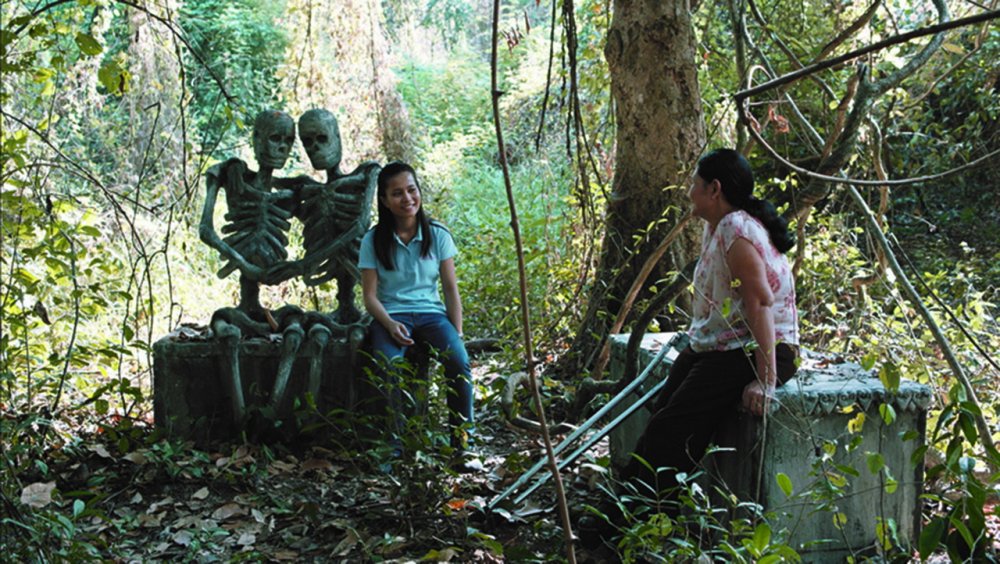 This unhappy situation is not allegorised in the film but instead refracted through a story that glides naturally from realist observation to a fantastical world where long-dead Khmer kings prosecute never-ending wars in some netherworld, leeching spiritual sustenance from our present. Apichatpong’s singular method is by now familiar: he looks at present-day realities through a prism of personal and collective memories, refusing to distinguish between the everyday, dream-states and dark fantasies, the latter more often than not rooted in the history of his medium. His modus operandi here climaxes in the extended sequence towards the end of the film in which Keng claims to access Itt’s consciousness and takes Jen on a tour of the hospital grounds.

Keng-as-Itt sees the rooms of a gorgeous palace and magnificent vistas of an unspoiled land. Jen doesn’t seem to take this in but sees what’s actually there: dumped garbage and debris, moralistic quips painted on signboards, sculptures of couples – corporeal and skeletal – created by the mystical Laotian artist Bunleua Sulilat for his Sala Keoku Park. (Jen and Itt are also seen in Bunleua’s sculpture park in Apichatpong’s recent installation piece Fireworks (Archives), lately shown in Rotterdam.) The point is that both visions are true. There are ancient forces and battles underpinning the actions of many Thai authority-figures, and contemporary Thailand is a wasteland of consumer detritus, didactic commands and surreal incongruities. It’s in this sense that the film is an op-ed commentary on 21st-century Thailand. 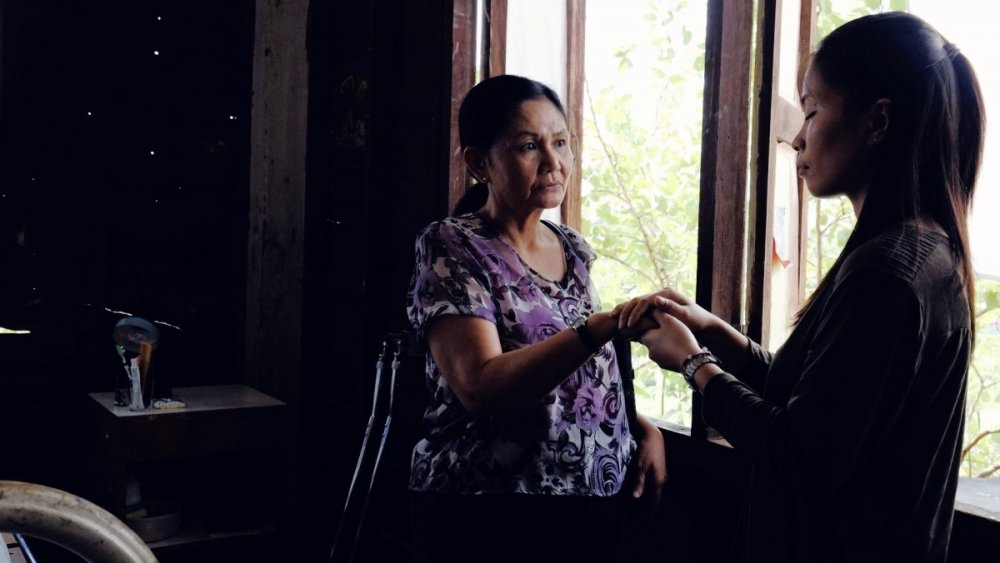 Cemetery of Splendour rests on Apichatpong’s familiar metaphor of sickness and the drive to heal it, from treatments for Jen’s damaged leg to the narcoleptic soldiers, echoed in images of a dying tree orchid and rather half-hearted mass aerobics. For Apichatpong, though, what Buddhists see as spiritual sicknesses – the mental impediments to achieving nirvana – always trump purely physical maladies, tropical or otherwise.

The diagnosis here, as in several of the Korean master Jang Sunwoo’s explicitly Buddhist films, is: situation critical, and probably inoperable. That’s why a mood of sadness and images of mania (non-musical chairs on the bank of Khon Kaen’s lake) come to dominate the film. It might be possible to alleviate some of the symptoms, perhaps with the play of coloured lights (they are, after all, a simpler and more abstract version of the movies), but it wouldn’t “reach the bones”.

Related to Film of the week: Cemetery of Splendour