Girl meets boy, girl loses boy, girl meets older man… The new film by Mia Hansen-Løve confirms the promise of Father of My Children with a frank – and very French – look at the pangs of young love, says Philip Kemp. 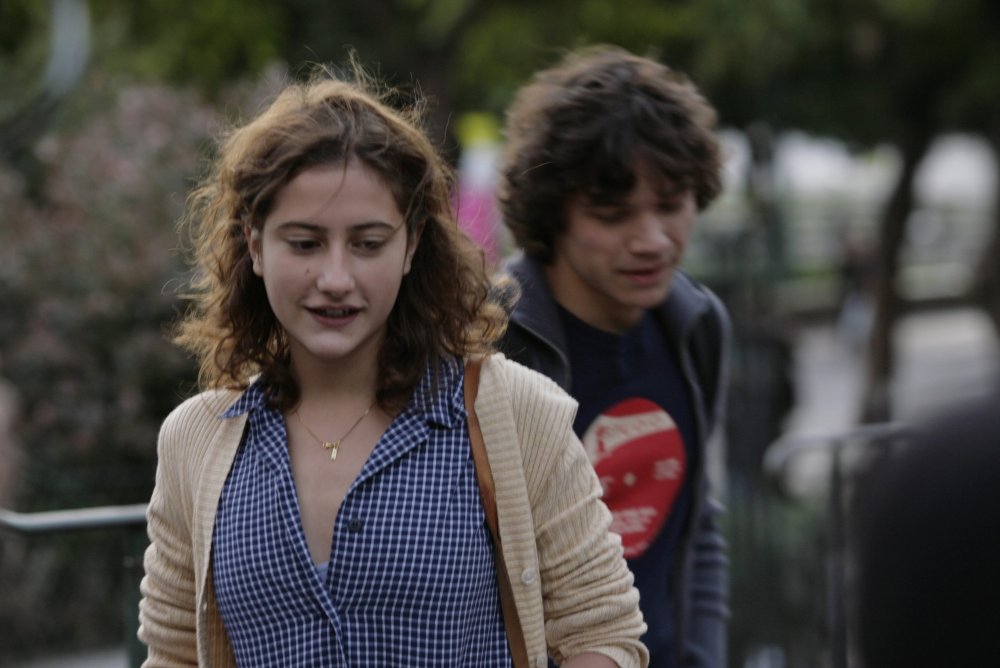 Leaving a Paris cinema, a young couple find themselves at odds over the movie they’ve just seen. She loved it: “The dialogue, the story, the characters – everything.” He’s vehement in his disagreement. “What a bad movie!” he rants. “It’s so French! The actors are annoying. It’s talky, complacent. I found it awful.” It’s tempting to suspect that, in devising this scene, Mia Hansen-Løve was ironically anticipating the kind of divergent responses her third feature would invite. If so, she was spot on. Screened at Telluride, Toronto, New York, Locarno and Glasgow, the film has had critics split between enchanted and exasperated.

Hansen-Løve has described Goodbye First Love (the French title is the less valedictory Un Amour de jeunesse) as the third and final entry in an autobiographical trilogy. Tout est pardonné (2007) followed the break-up of a couple caused by his drinking and drug addiction, observed chiefly through the eyes of their daughter. Her international breakthrough Father of My Children (Le Père des mes enfants, 2009) was inspired by the 2005 suicide of the independent producer Humbert Balsan (who initially planned to produce Tout est pardonné); here too the focus of the narrative finally settles on the producer’s eldest daughter. Hansen-Løve’s latest film borrows elements of her adolescent experiences, while the relationship between protagonist Camille and older professor Lorenz could be taken as reflecting that between Hansen-Løve and her partner and mentor, the director Olivier Assayas, 26 years her senior.

In the film, though, this relationship is secondary to the on-off affair between Camille (Lola Créton) and her first boyfriend Sullivan (Sebastian Urzendowsky). They’re the couple we see arguing about the movie, and it’s this dispute that occasions Camille’s comment, “We don’t have any tastes in common.” To which she adds, “That doesn’t stop me loving you, though. I’ll always love you, but I don’t know why.” The theme’s hardly new – loving the wrong person, knowing that they’re the wrong person, but being unable to stop yourself loving them – but Hansen-Løve treats it with a directness of gaze, an emotional and visual freshness that keeps it true and affecting.

The action spans three time-segments spread over eight years – unusually for this type of nostalgia-fuelled movie, there are no flashbacks and events are strictly chronological. In the first we see Camille and Sullivan as teenagers, sexually infatuated with each other, but with their love overshadowed by his imminent departure on an extended trip to South America. It ends with her suicide attempt after his final letter breaking up with her. Three years later, when Camille is an architecture student, she meets Lorenz, much older than her and midway through a divorce, but warm and emotionally stable in contrast to the mercurial, commitment-phobic Sullivan. Four years on, in a settled relationship with Lorenz and advancing fast in her profession, she meets Sullivan and their affair is briefly rekindled, but once again he eventually backs off.

Right from the start, it’s evident that the young couple’s emotional registers are out of synch: each time Camille tries to express her need of Sullivan, he backs off. “We have all our lives to be serious – let’s make the most of our youth,” he tells her patronisingly. Inevitably, the more he pushes her away, the harder she tries to cling to him. At one point when they’re staying alone together in her family’s holiday home in the Ardèche, Sullivan makes dinner, but then ludicrously seats the two of them at either end of a long refectory table. Mid-meal Camille decides she’s had enough of this distancing tactic, and comes crawling towards him on hands and knees along the bench beside the table. There’s something slightly spooky about the image; it feels like a moment out of Poe or M.R. James.

Hansen-Løve doesn’t romanticise her young lovers; they do that themselves, striking self-consciously melodramatic poses and making half-joking pronouncements borrowed from the lexicon of doomed obsession. When Camille proposes cutting her hair short, Sullivan responds, “If you cut it, I’ll leave you.” “No,” she counters, “because then I’d kill you, and myself as well.” To her mother’s tentative suggestion that Sullivan isn’t perhaps ideal for her – and that in any case 15 is a little early to be making irrevocable life choices – Camille (living up to her name) replies in the high-flown, operatic mode of a 19th-century heroine. “He’s the man of my life,” she proclaims. “Love is the only thing that counts for me. It’s my sole reason for living.”

If Camille is self-dramatising, she’s outdone by Sullivan when it comes to solipsism. The letter from Peru in which he breaks off their relationship furnishes a master-class in self-regarding insensitivity. “When I’m allowed to change I grow closer to myself,” he announces. “But you won’t let me get away. I look for you when I’m kissing someone else. Camille, I think I love you, but I want you to disappear” – which she duly almost does, attempting suicide with an overdose.

When we catch up with Camille three years later she’s found a vocation in architecture, but her emotional life is on ice. She invites a boy back to her place only to refuse him sex, while a tutor comments that her design for a student-accommodation complex is fit only to be a monastery. It takes Lorenz (Magne-Håvard Brekke, who had a small role as the Lars von Trier-like director in Father of My Children) to thaw her on a trip to a Danish coastal resort. Water, at several points in the film, takes on an iconic, almost Renoiresque role, nearly always connecting with a key moment in Camille’s development, a change in her life’s flow. The swim in the Baltic heralds her liaison with Lorenz; twice she swims in the Loire (here a rippling hill-country stream, not the majestic expanse of the chateau region) – once with Sullivan and once, at the very end, alone; and when she and Sullivan meet again in the film’s third segment, their strolls often take them beside the Seine as they try to resolve the cross-currents of their renewed relationship. (To underline the metaphor, Johnny Flynn and Laura Marling’s ‘The Water’ – “All that I have is a river” – features twice on the soundtrack.)

Another recurrent, more prosaic symbol is the straw hat Sullivan buys for Camille before they go to the country. She wears it there and at one point, sitting pensively on her bed, tosses it over a spider she sees crawling on the floor, as if wishing she could trap her emotionally elusive boyfriend as easily. Earlier Hansen-Løve has irised in and out on the hat to effect a transition – a rare stylistic flourish from a director who normally avoids foregrounding technique. And in the final scene, when Camille swims in the Loire after Sullivan has broken with her yet again, the hat blows away and floats off downstream, suggesting that perhaps she’s at last through with her infatuation.

Here – as at one or two other junctures (Camille and Sullivan riding bareback together on a chestnut horse) – the symbolism gets a little plonky. But for the most part the film flows with a limpid naturalism and charm, thanks not least to the lead performance of Lola Créton. True, Camille is often pouty and irritating – as what love-struck adolescent isn’t? – but Créton (the child bride in Catherine Breillat’s Bluebeard) plays her with an unforced warmth and an underlying determination that gain our sympathy. Sebastian Urzendowsky’s Sullivan suffers by comparison, not all his lines ringing entirely true – though it could be argued that this is only fitting for an essentially untrustworthy character. But altogether the film effectively extends the range of one of France’s most notable young directors – besides reminding those of us who once suffered the pangs of teenage love that we’re very well out of it.

Mia Hansen-Løve discusses her quest for truth on page 53 of the May issue of Sight & Sound.

Related to Film of the month: Goodbye First Love