The Dutch director crafts a hard-hitting portrait of a young woman, played vividly by newcomer Vicky Knight, who is rebuilding her life after an acid attack.

Positively vibrating with barely suppressed pain, rage and injustice, Sacha Polak’s Dirty God is both a sharply observed character study and a damning indictment of our skin-deep Instagram culture. Fuelled by a stunning debut performance from newcomer Vicky Knight, the film explores life on the margins, without ever succumbing to the well-worn clichés that normally define such outsider narratives. That it marks the English-language debut of Dutch filmmaker Polak (Hemel, Zurich) is particularly impressive; working with co-writer Susie Farrell, Polak has made a hard-hitting, bitingly authentic film in the vein of social-realist works by British filmmakers such as Andrea Arnold and Lynne Ramsay.

Real-life burn survivor Knight puts in a transcendent turn as twentysomething Jade, whom we meet as she prepares to leave an East London hospital; the scars across her face, chest and arms speak of serious trauma and the months of treatment that have been endured. Jade returns home with her mother Lisa (Katherine Kelly), a shared smile in the back of the cab tinged with uncertainty about what lies ahead.

It’s immediately clear that life will not be the same. When Jade goes to collect her infant daughter Rae from a neighbour, the child reacts to her mother’s appearance with screams of terror. While others in her life may not respond with such unbridled aggression, and her best friend Shami (Rebecca Stone) treats her no differently, she nevertheless endures endless stares, whispers and open taunts. Jade responds with calm resilience; aside from a vicious altercation with cruel workmates, she keeps her anger in check. It’s only late in the film, in a rare moment of cathartic unburdening, that we see her weep as she recalls how Rae called her “a monster”. She is, however, clearly adrift in her own skin. 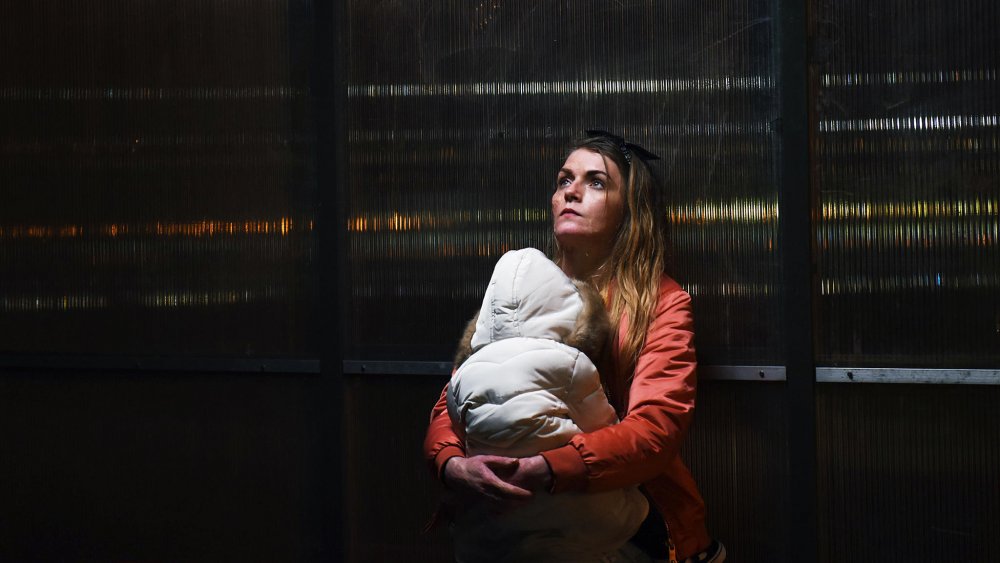 Knight with Eliza Brady-Giraud as Rae

Yet this is determinedly not a film about victimhood, but survival. We only learn about Jade’s trauma – an unprovoked acid attack by her ex-boyfriend – through snippets of conversation and a short court sequence; and although there’s an underlying sense that both Jade and her mother are struggling to come to terms with the randomness of the event, there’s no soulsearching, no moment of wailing self-pity. “My God’s definitely not your God,” Jade tells Shami’s boyfriend Naz (Bluey Robinson) at one point, with characteristic dryness. “My God’s a dirty God.”

There’s no denying that Jade’s scars are the first thing that people see, including us; the film opens with Ruben Impens’s camera panning intimately over Jade’s skin, a thematically fitting alien landscape of ridges and knots, to the bewitching strains of Iranian-Dutch singer Sevdaliza’s ‘Human’ – “I am flesh. Bones. I am skin. Soul.” Crucially, however, Jade is not defined by them. Taking care to avoid the traditional onscreen treatment of disabled, ill or scarred characters, Dirty God refuses to place her on a pedestal or make her an object of either pity or pro-activity.