Requiring audiences to do more emotional work than they would for four live-action Oscar-bait films combined, Pixar’s Coco is a beautiful testament to the power (and pains) of family. It also deconstructs myths around fame and celebrates Mexican culture, from street food to an array of musical genres on the soundtrack. Given that most Hollywood films and TV shows set in Mexico are about drug dealers or louche spring-break romps, Coco’s tender and accurate depiction of los Estados Unidos Mexicanos is long overdue.

These achievements are set against the sumptuous and complex background of the Dia de Muertos – the Day of the Dead. Although the festival is celebrated in many countries throughout Central and South America, it’s Mexico’s version – a mix of Spanish and Aztec traditions, incorporating the iconography of artists such as José Posada – that is the best known worldwide: families gather to honour their ancestors by putting their favourite foods on an altar and cleaning and decorating their graves.

Coco blends these traditions with a bit of Pixar magic, as the borders between the realms of the living and the dead become mutable and a young boy named Miguel (Anthony Gonzalez) finds himself trapped in the afterlife. Frida Kahlo, the masked luchador El Santo and Edward James Olmos all make cameo appearances; perhaps such details won’t be exciting to those whose familiarity with Mexican culture begins and ends with Chipotle, but no manches, they’re great.

Similar care is taken with Miguel. He comes from a family of shoemakers: his great-great-grandmother Imelda learned the trade after being deserted by her musician husband, and her skills – and hatred of music – have been passed down through the generations. But Miguel secretly plays guitar and idolises Ernesto de la Cruz (Benjamin Bratt), a Pedro Infante-like star who was once Mexico’s most famous musician – and who, it so happens, came from Miguel’s hometown. On the Day of the Dead, Miguel attempts to play in a talent contest rather than honour his ancestors, and his grandmother responds by angrily smashing his guitar. But when Miguel spots what he thinks is de la Cruz’s guitar in an old photograph of Imelda, he decides that his hero must also have been his great-great-grandfather. 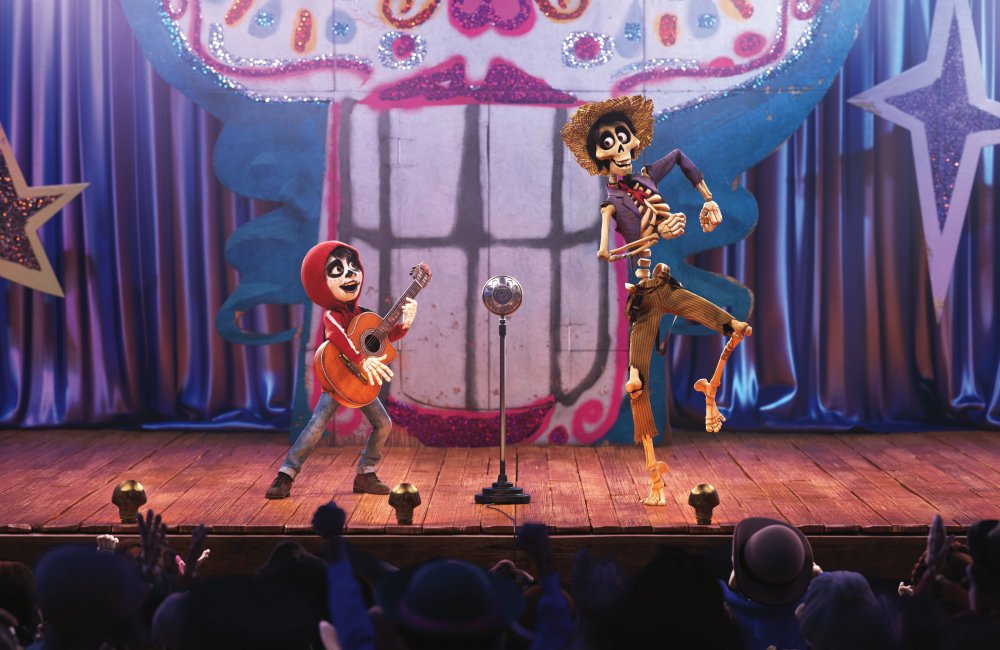 Miguel runs to de la Cruz’s crypt and takes the guitar that’s lying there – only to be transported to the land of the dead, a bustling city that echoes the incredible architecture of Mexico City. Stuck between life and death, the only way Miguel can return to the land of the living is with the blessing of his deceased relatives. However, they refuse to pander to his ambitions, and make it a condition of the blessing that he will never play music again. So instead, Miguel goes off with Héctor (Gael García Bernal), who is on the verge of being totally forgotten and therefore banished to the ‘final death’. Héctor, also a musician, claims to know de la Cruz, and promises to help Miguel provided the boy agrees to take his photograph back to the land of the living, which will allow him to cross over and see his daughter one last time.

Although Héctor and Miguel’s journey to find de la Cruz leads them to discover the unglamorous side of fame, Coco gives space to these complex emotional moments without ever getting too dreary. (The expressionist designs – alternately glowing and colourful and tattered and dark – also help to modulate these beats.) Its victorious denouement offers everyone a different way to think about what it means to live on, and how that starts by treating those dearest to us well. Too bad films for adults aren’t this smart.

Related to Film of the week: Coco, Pixar’s vital dance with los muertos