The best films of 2015 as voted for by 168 critics and the year in review, Alejandro González Iñarritu on The Revenant and Nora Ephron, queen of the romcom. Plus Guy Maddin, Terence Davies, Raoul Peck, Haile Gerima, Cecile Emeke and much more…

In print and digital from 27 November. Log in / sign up or or buy a print copy now. 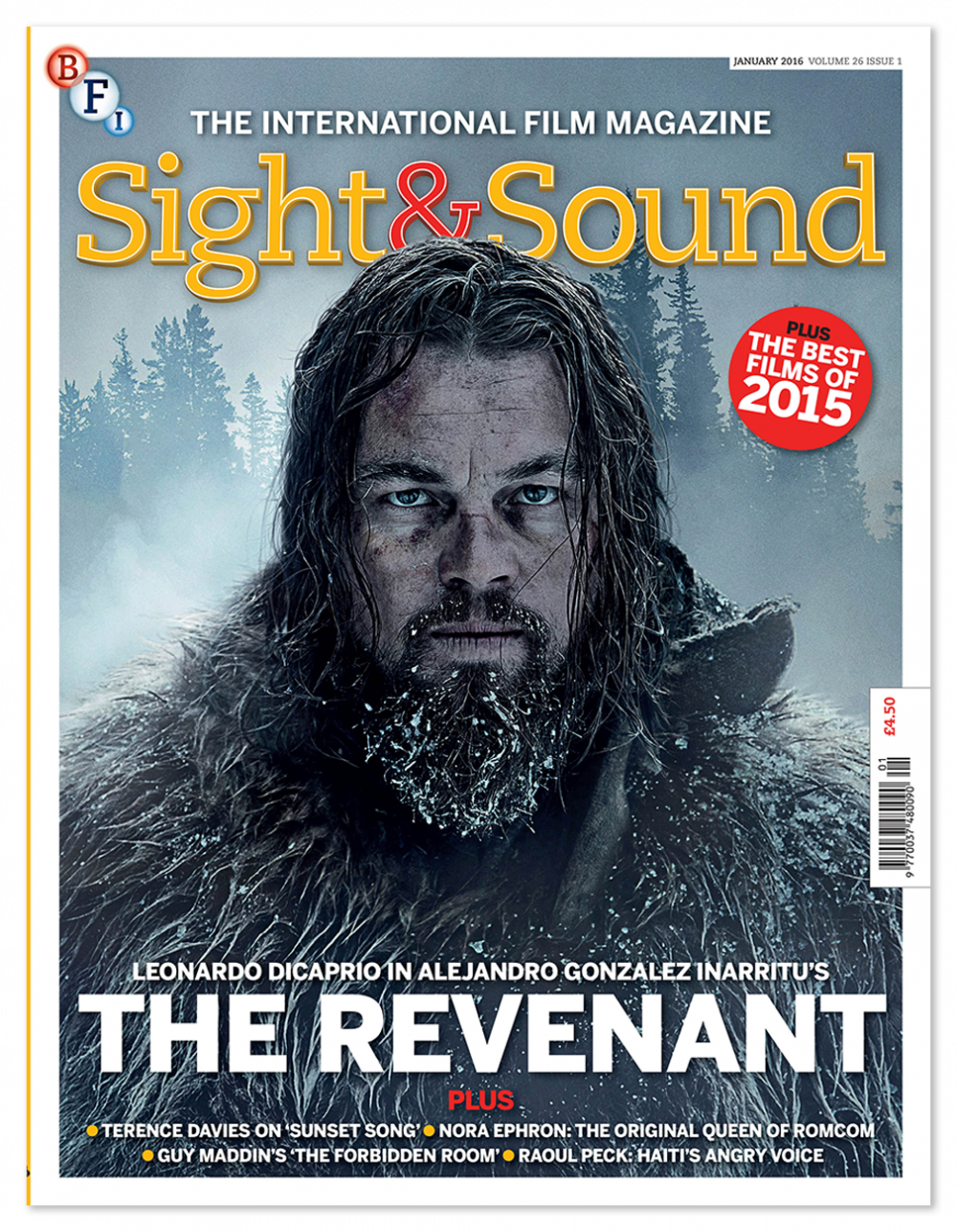 Our first issue of the new year shows a grizzled Leonardo DiCaprio on a mission of revenge after being left for dead in the frozen north of Alejandro González Iñarritu’s The Revenant.

Edward Lawrenson talked to Iñarritu the day after the director had finished editing this Jack London-like tale of super-hardy fur trappers at odds with bears, native tribes and the elements, in which he and cinematographer Emmanuel Lubezki again give the impression that the whole film was shot in a single take.

Of course, The Revenant has been seen by hardly anyone yet, and so it could not have been included in this year’s Films of the Year poll. Without giving anything away here, this year’s brilliantly diverse top ten contains a few surprises and many films which have a woman as their central character.

We were proud back at the London Film Festival in October to have Guy Maddin’s extraordinary cornucopia of twisted half-narratives and fractured nightmares The Forbidden Room as the Sight & Sound gala screening. Now, as it gets its UK release, Adam Nayman interviews Maddin and his newly promoted young co-director Evan Johnson about the film’s strangely alluring exegesis.

In concert with the BFI’s bonanza LOVE programme and the re-release of When Harry Met Sally, Hannah McGill is delighted to dub Nora Ephron the ‘Queen of the Romcom’ for her blending of the “sweet and sour flavours of screwball romance” and commitment to being simultaneously funny and truthful, no matter what the cost.

The great Terence Davies talks to Nick James about his 15-year struggle to bring Lewis Grassic Gibbon’s classic novel Sunset Song to the screen, something he’s achieved with such sumptuousness in 65mm that you feel the ground beneath your feet must be in the Mearns in north-east Scotland. 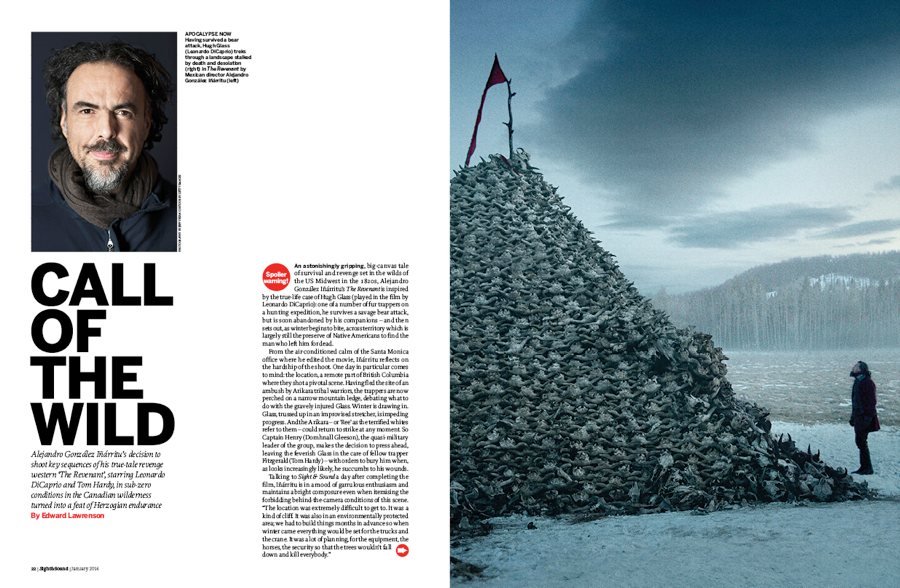 Call of the Wild

Alejandro González Iñárritu’s decision to shoot key sequences of his true-tale revenge western The Revenant, starring Leonardo DiCaprio and Tom Hardy, in sub-zero conditions in the Canadian wilderness turned into a feat of Herzogian endurance. By Edward Lawrenson. 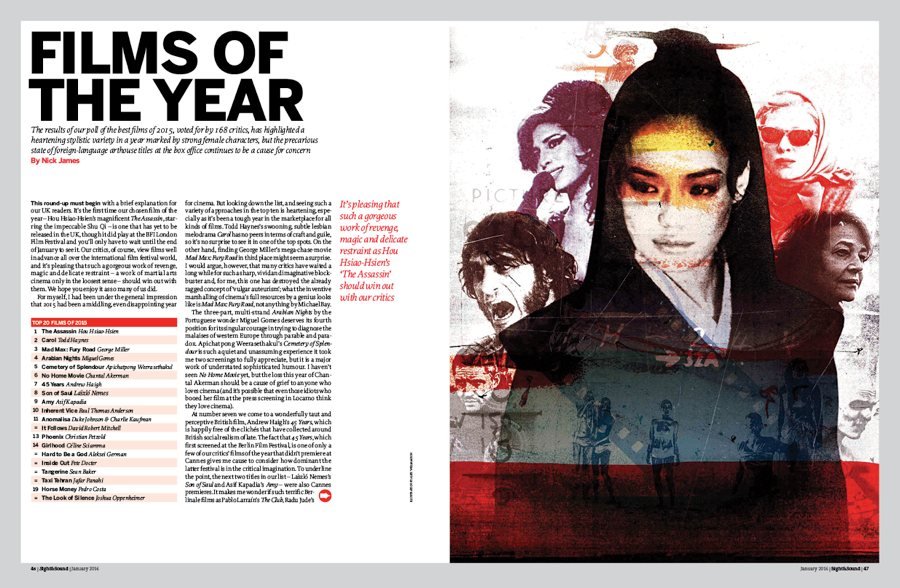 The results of our poll of the best films of 2015, voted for by 168 critics, has highlighted a heartening stylistic variety in a year marked by strong female characters, but the precarious state of foreign-language arthouse titles at the box office continues to be a cause for concern. Introduced by Nick James.

+ The year in action films

Despite the cynicism and predictability of some tentpole fare, such as ‘Furious 7’ and ‘Jurassic World’, the summer did bring signs of life for expressive action filmmaking, as well as a couple of low-budget treats. By Nick Pinkerton.

+ The year in silent films

The rediscovery of a lost reel of a Laurel and Hardy film, a new print of E.A. Dupont’s masterful ‘Varieté’ and the first sight of a never-released film with an African-American cast were the high points of 2015. By Pamela Hutchinson.

+ The year in critical debate

Questions concerning inclusivity and the politics of representation, both in front of and behind the camera – and in the choice of what’s shown on the big screen – dominated discussions about cinema. By Jemma Desai and David Edgar.

+ The year in distribution

The digital apocalypse that some critics warned would kill off cinemas hasn’t happened, but we are still living in a transitional period and the dividing line between ‘film’ and ‘TV’ feels closer than ever before. By Nick Roddick. 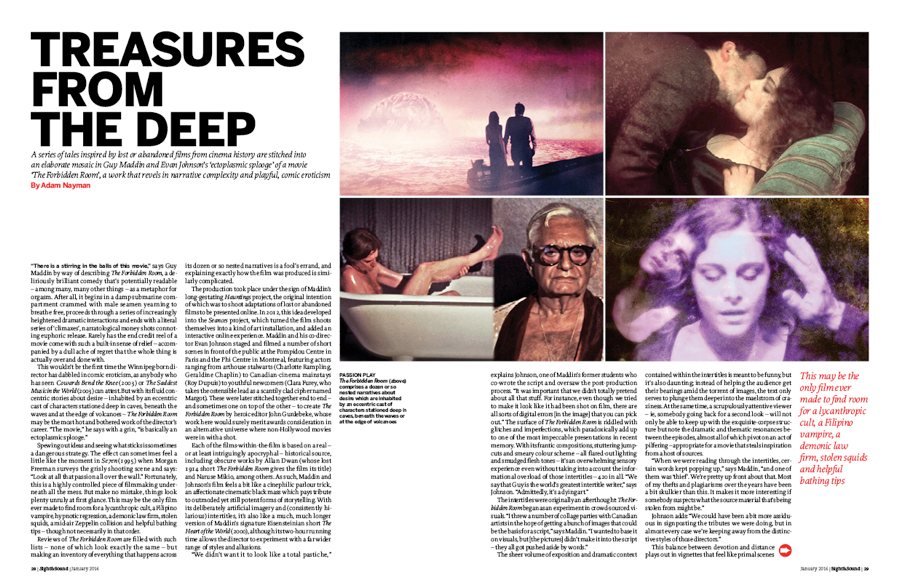 Treasures from the Deep

A series of tales inspired by lost or abandoned films from cinema history are stitched into an elaborate mosaic in Guy Maddin and Evan Johnson’s “ectoplasmic splooge” of a movie The Forbidden Room, a work that revels in narrative complexity and playful, comic eroticism. By Adam Nayman. 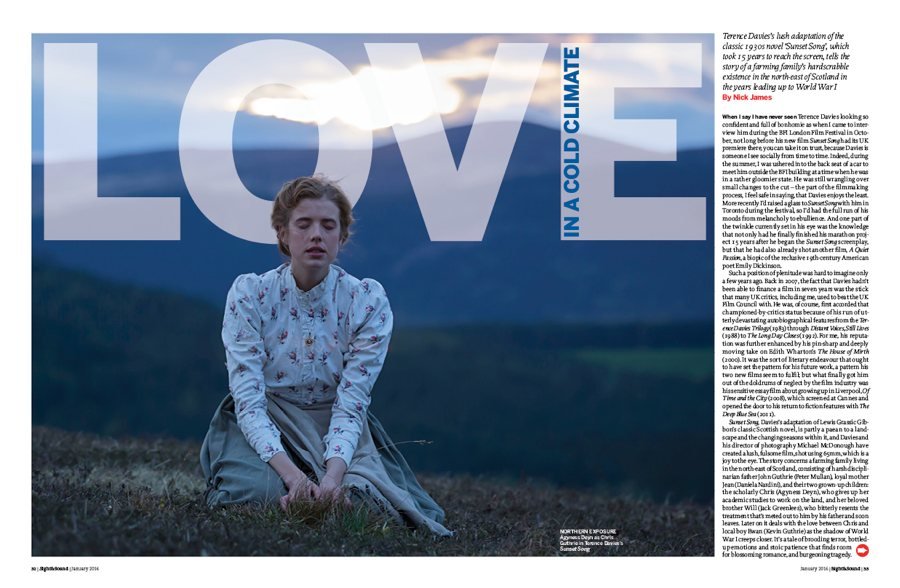 Love in a Cold Climate

Terence Davies’s lush adaptation of the classic 1930s novel Sunset Song, which took 15 years to reach the screen, tells the story of a farming family’s hardscrabble existence in the north-east of Scotland in the years leading up to World War I. By Nick James. 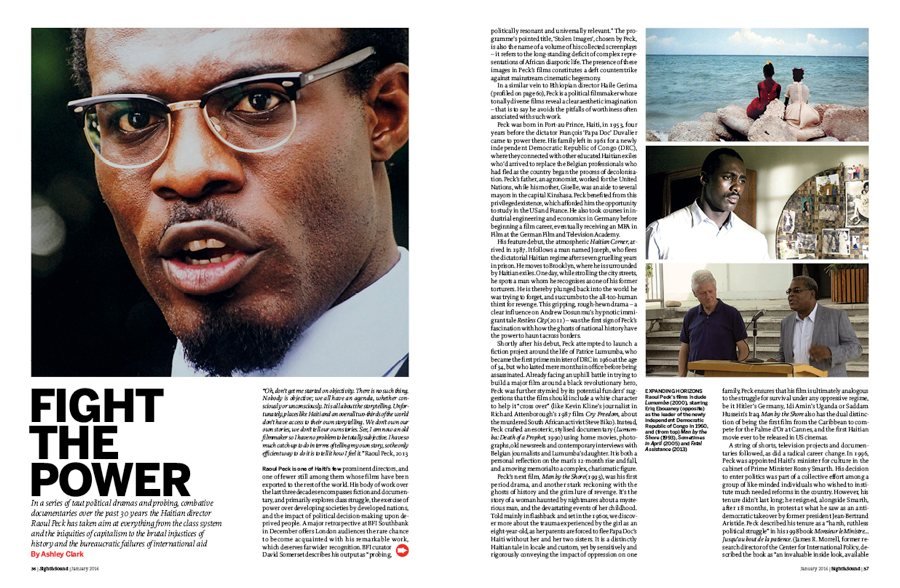 In a series of taut political dramas and probing, combative documentaries over the past 30 years the Haitian director Raoul Peck has taken aim at everything from the class system and the iniquities of capitalism to the brutal injustices of history and the bureaucratic failures of international aid. By Ashley Clark. 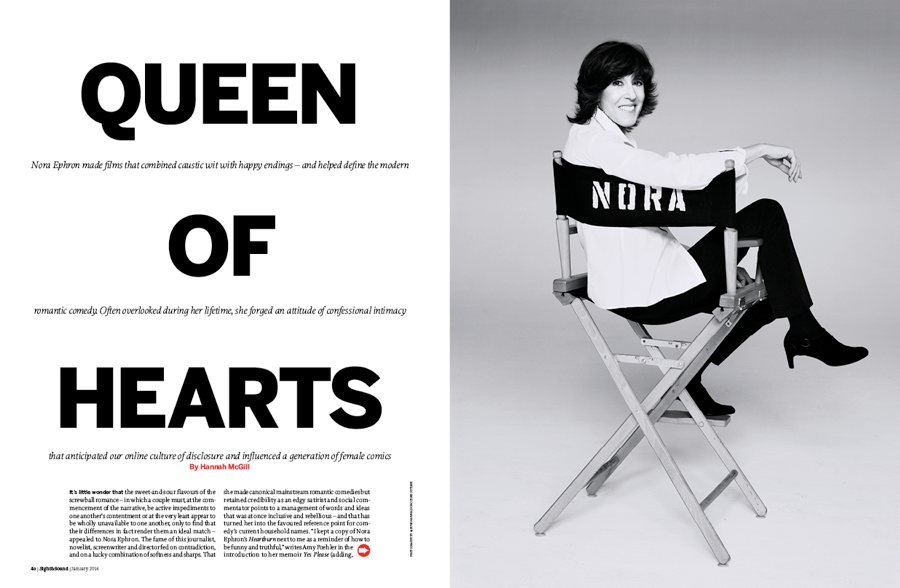 Nora Ephron made films that combined caustic wit with happy endings – and helped define the modern romantic comedy. Often overlooked during her lifetime, she forged an attitude of confessional intimacy that anticipated our online culture of disclosure and influenced a generation of female comics. By Hannah McGill. 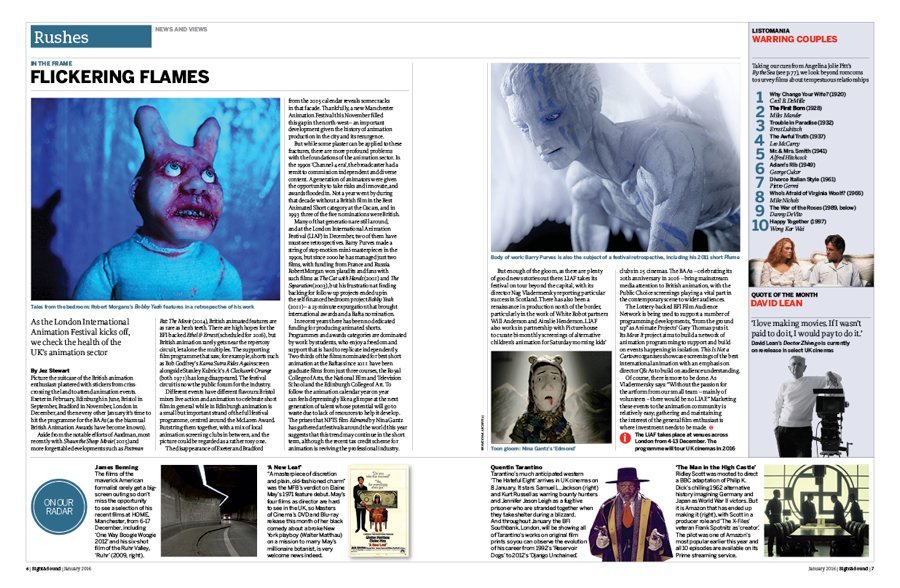 In the frame: Flickering frames

As the London International Animation Festival kicks off, we check the health of the UK’s animation sector. By Jez Stewart.

Object lesson: For whom the bell tolls

Walt Disney, Alfred Hitchcock and Lars von Trier assemble for a festive celebration of campanology in cinema. By Hannah McGill.

The five key…: Films about sisters

As two leading US female comics team up to play bickering siblings, we survey cinema’s finest portraits of sisterhood. By Anna Coatman.

Online: Talk of the town

Cecile Emeke’s small but singular body of online work reveals a filmmaker determined to tell stories on her own terms. By Simran Davies.

Bond films remove the process of getting places so radically they can feel dreamlike – recalling another post-colonial product, Doctor Who. By Mark Cousins. 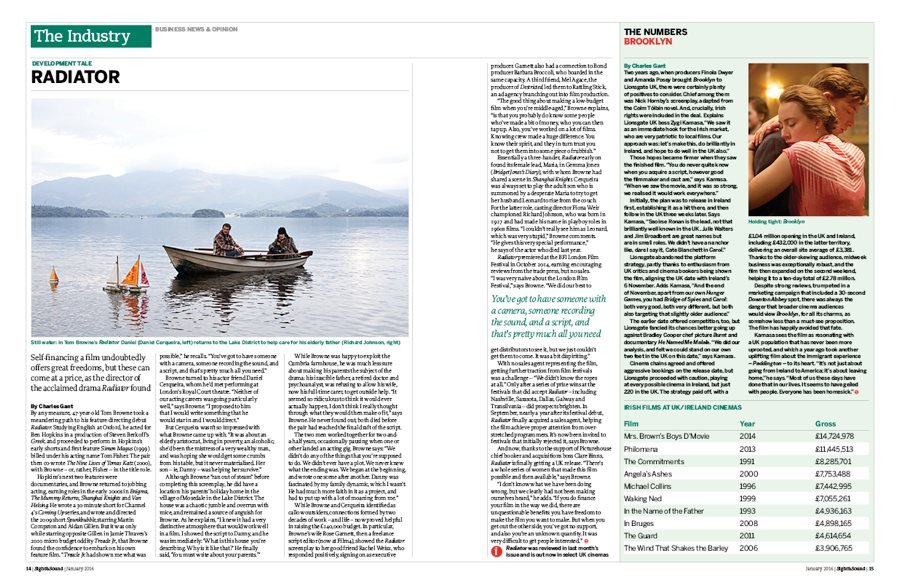 Self-financing a film undoubtedly offers great freedoms, but these can come at a price, as the director of the acclaimed drama Radiator found. By Charles Gant.

Irish films at the UK and Irish box offices, by Charles Gant.

Challenging cinema would be better served if we could encourage younger viewers to adopt the film-going habits of the over-55s. By Ben Roberts. 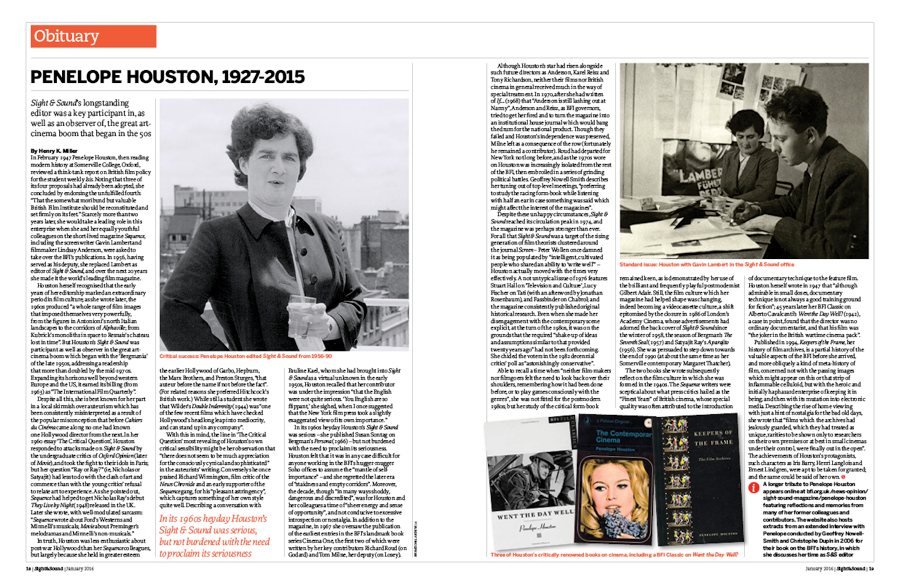 Sight & Sound’s longstanding editor was a key participant in, as well as an observer of, the great art-cinema boom that began in the 50s. By Henry K. Miller. 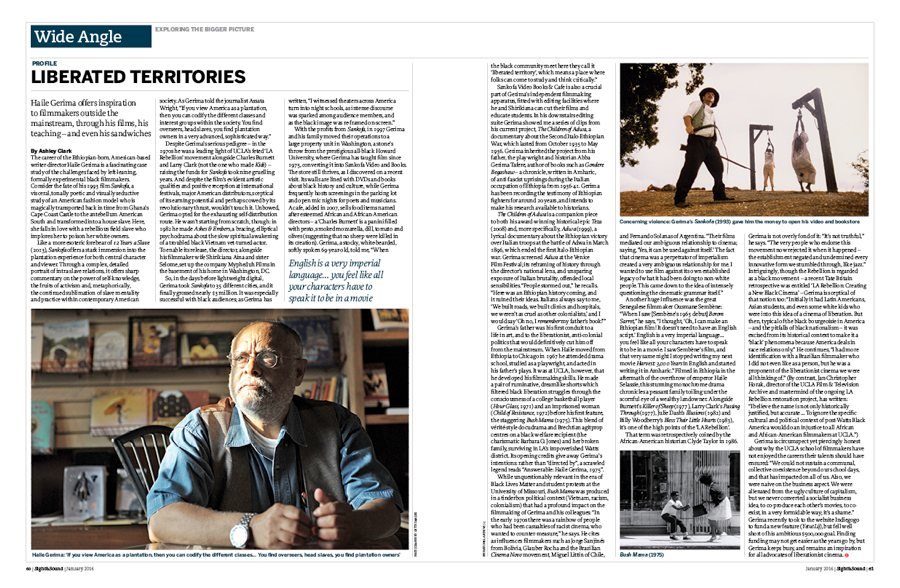 Haile Gerima offers inspiration to filmmakers outside the mainstream, through his films, his teaching – and even his sandwiches. By Ashley Clark.

For 16 years the photographer and documentary maker Leah Gordon has been recording Haitian life, music and carnival culture. By Sam Davies.

A three-year project is revealing the extraordinary, untidy beginnings of the talkies in Britain. By Geoff Brown.

While Doclisboa took on questions of connection to and isolation from the world, its main prize went to a film about a hermit. By Giovanni Vimercati. 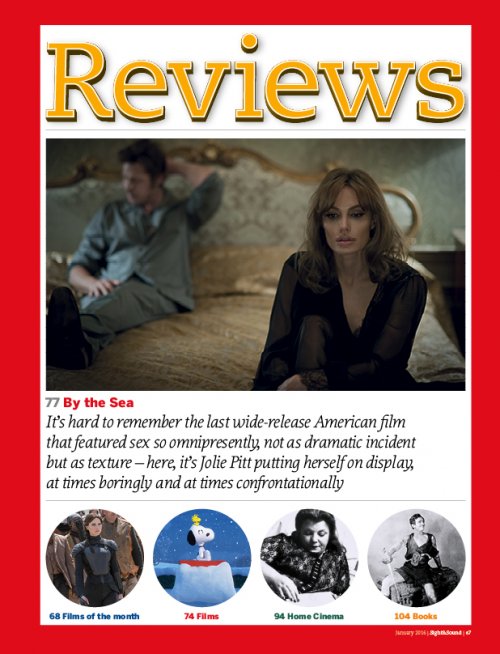 All About Them
Les Anarchistes
At Any Price
Bound to Vengeance
Burnt
By the Sea
Chemsex
Chic!
Christmas with the Coopers
The Closer We Get
The Danish Girl
Fathers & Daughters
Grandma
Grazing the Sky
Heart like a Hand Grenade
Hector
The Honourable Rebel
Ice and the Sky
The Last Witch Hunter
The Lesson
Paranormal Activity: The Ghost Dimension
Peggy Guggenheim: Art Addict
The Runner
The Russian Woodpecker
Scouts Guide to the Zombie Apocalypse
Shaandaar
Shelter
The Show of Shows
Sleeping with Other People
Snoopy and Charlie Brown: The Peanuts Movie
Soaked in Bleach
Sparks and Embers
The Sweet Escape 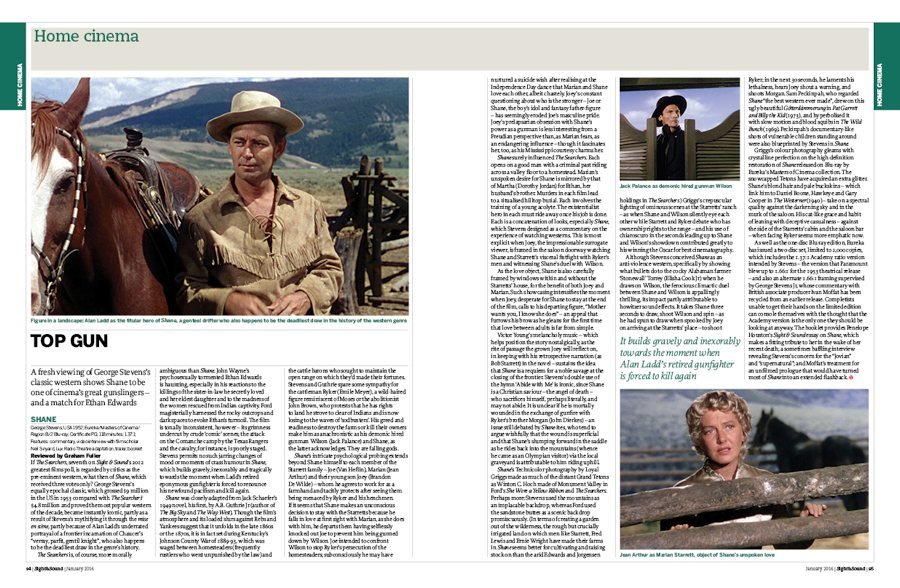 A fresh viewing of George Stevens’s classic western shows Shane to be one of cinema’s great gunslingers – and a match for Ethan Edwards. By Graham Fuller.

Murder, he wrote: Murder in the Cathedral

T.S Eliot’s dark and menacing telling of the assassination of Thomas Becket deserves a revisit – and perhaps even a horror remake. By Kevin Jackson.

A half-century of American abstract filmmaking reveals a medium in a state of constant creative metamorphosis. By Jordan Cronk.

Lost and found: Alice or the Last Escapade

A fantastical reimagining of Lewis Carroll’s Wonderland is perhaps the most intriguing outlier of Claude Chabrol’s entire career. By Craig Williams. 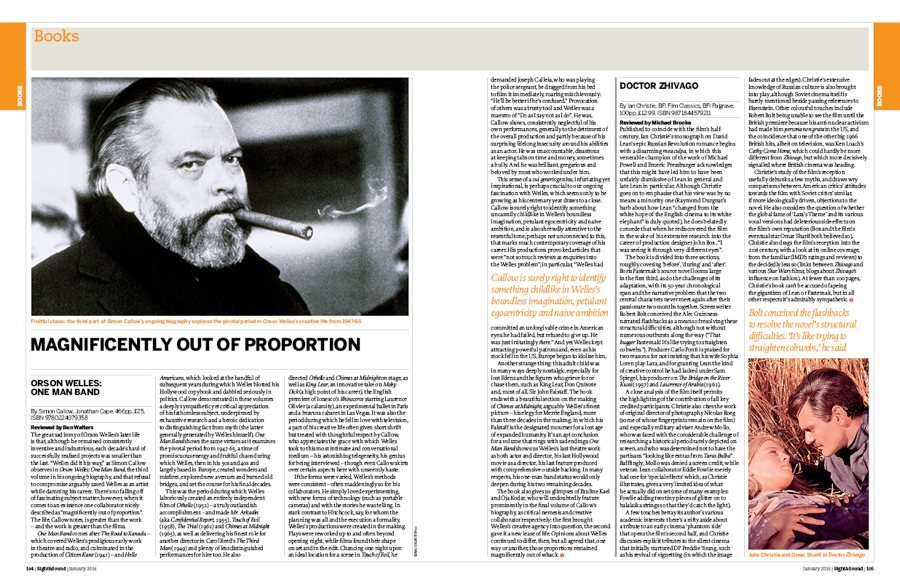 The First King of Hollywood: The Life of Douglas Fairbanks by Tracey Goessel (Chicago Review Press) reviewed by Dan Callahan 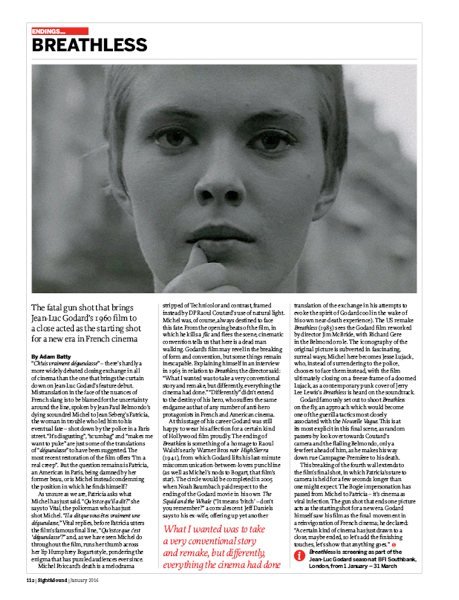 The fatal gun shot that brings Jean-Luc Godard’s 1960 film to a close acted as the starting shot for a new era in French cinema. By Adam Batty.