Radu Jude interview: “Scarred Hearts is like a jazz piece” 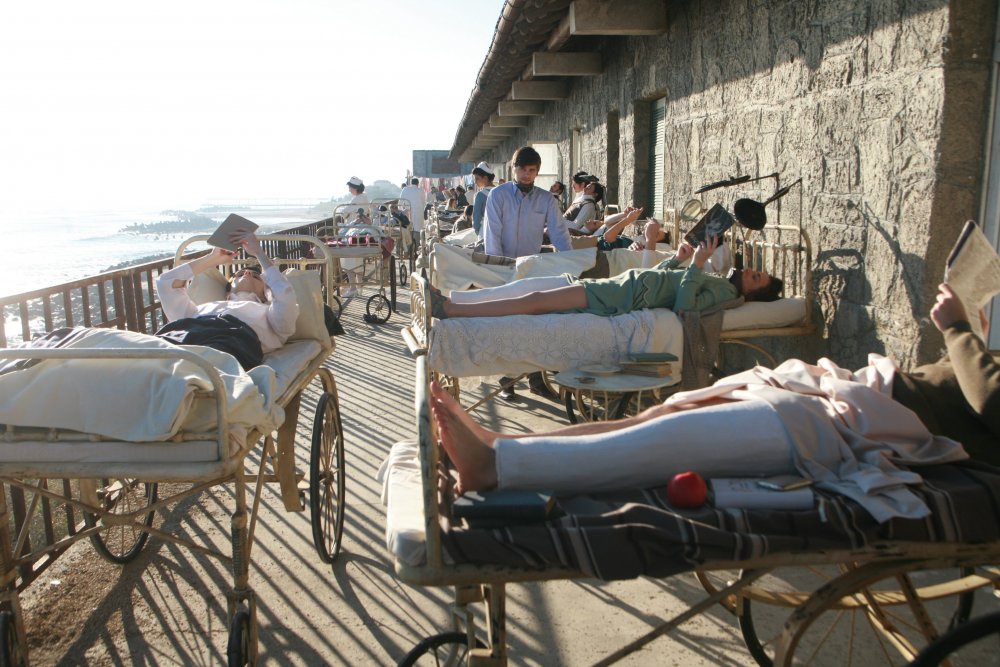 One of the outstanding films of the last year, both stylistically and in content, Radu Jude’s Scarred Hearts is the latest from someone who is emerging as the most individual and inventive of the new generation of Romanian filmmakers. Jude worked as assistant director on Cristi Puiu’s The Death of Mr Lazarescu (2005), the work generally credited with kickstarting the new wave of Romanian realism. He himself has made films which fit, roughly speaking, within the familiar stylistic parameters of this new wave – notably his 2009 comedy about exploitative media The Happiest Girl in the World. But he departed sharply from known in 2015’s historical piece Aferim!, a somewhat swashbuckling evocation of 19th-century rural Romania – and the practice of using Gypsies as slaves – which at once evoked Andrei Rublev, Miklos Jancsó and Sergio Leone’s westerns.

Scarred Hearts is streaming on MUBI.com until 5 August.

In an entirely different register, the sober but vibrant Scarred Hearts is based on the autobiographical work of the Romanian author Max Blecher (1909-38). It’s about a young Jewish man, Emmanuel (Lucian Rus), afflicted – like Blecher himself – with spinal tuberculosis, who checks into a sanatorium where he becomes part of an enclosed social world. The physical restriction which Emmanuel faces – his upper body immobilised in a plaster cast – leads to the film’s extraordinary tableau style, its prevalence of fixed-camera long takes leading to an emphasis on horizontality, and to an extraordinarily richness of detail within the frame. 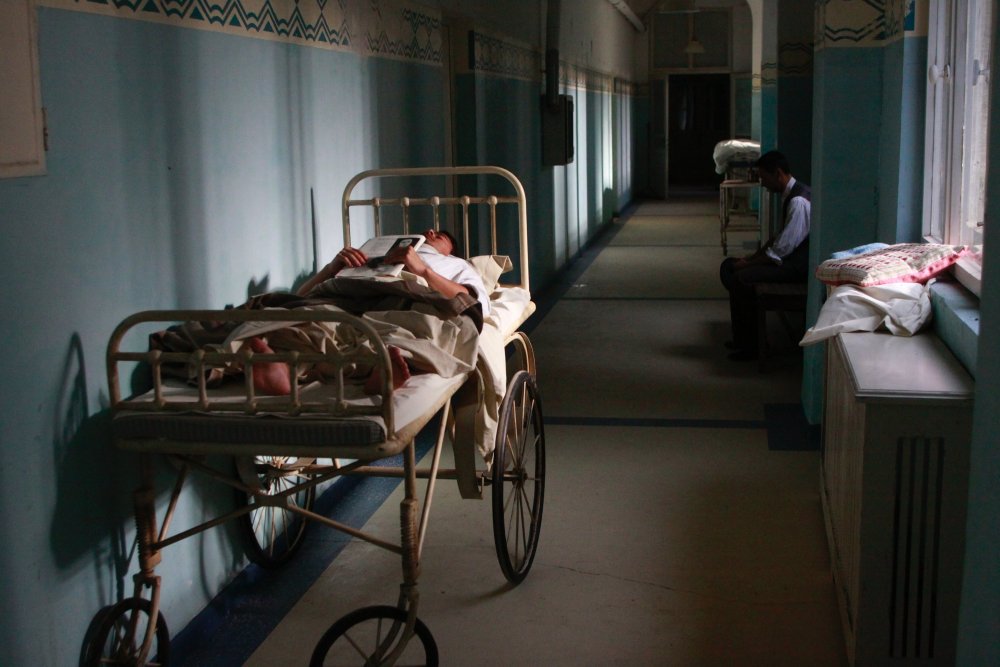 The film is also – rather like Mr Lazarescu, or indeed Lindsay Anderson’s Britannia Hospital – an examination of the closed hospital space as a microcosm of society. The milieu that Emmanuel comes to inhabit is a republic of incapacitated men and women, many of them destined for early death, yet who rage against their condition, engaging in fierce, sometimes anarchic debate, cultural pursuits, love and sex. Passion rages irrepressibly in this atmosphere – Emmanuel has relationships with a young patient, Isa (Ilinca Harnu), immobilised like him, and with a young woman named Solange (Ivana Mladenović), who has left the establishment fully cured, but nevertheless can’t keep away from it, and from liaisons with its male patients. Another passion that flourishes in the hospital is for political rhetoric – which allows Jude to depict a society in which antisemitism is increasingly virulent, as Romania grows ever closer in its alliance with Nazi Germany.

This is a theme Jude further explores in his recently premiered documentary The Dead Nation, which, let’s hope, should be visible in the UK soon. In it, he uses visual material from an archive of glass-plate photos from the late 30s and early 40s, showing everyday life in Romania, and juxtaposes them with sound material from the period – including both propaganda broadcasts and a Jewish doctor’s diary of those years. The result is what Jude, after Plutarch, calls a record of “parallel lives” – official history on one hand, and on the other the horror (since obscured in official Romanian history) of the nation’s extermination of its Jewish community. 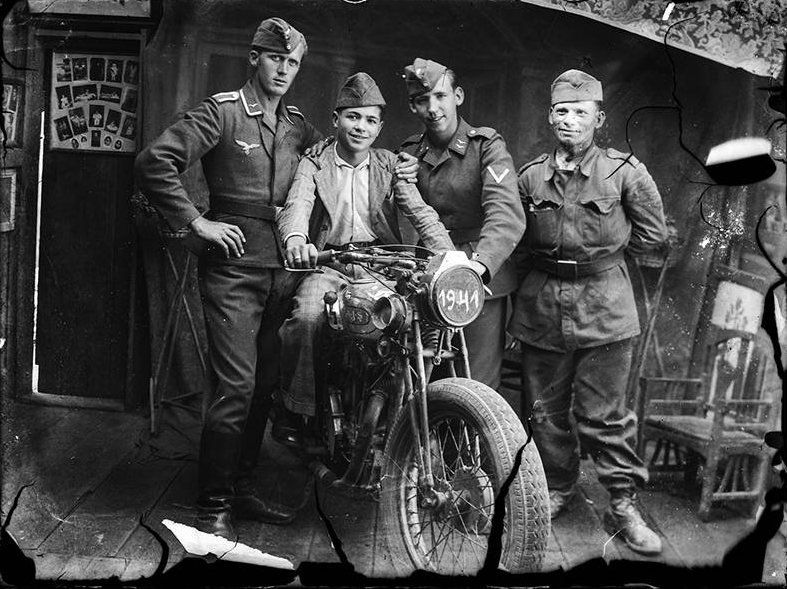 He has also just embarked on shooting a new fiction feature. Its subject is an attempt to re-enact the massacre by Romanian troops of the Jews of Odessa in October 1941; it will be done, Jude says, partly along similar lines to artist Jeremy Deller’s Battle of Orgreave re-enactment project. “I didn’t want to stage a massacre, a filmic representation,” Jude says, “but I can speak about it in an oblique way, through characters who reenact it.”

I talked to Radu Jude last October, during his visit to the London Film Festival.

As I understand it, Scarred Hearts is based on two books by Max Blecher in which he doesn’t talk about himself directly, although his protagonist is essentially him.

Yes. Blecher wrote two novels when he was young – one of them more like a poem. Scarred Hearts is based on autobiographical elements; posthumously another book, Sanatorium Journal [AKA The Enlightened Lair], was published, dealing with the same things. I took the structure and the story from his book, took out some things and added some which came from my research on Blecher’s hospital years, plus some stuff from another writer, his friend Mihail Sebastian. 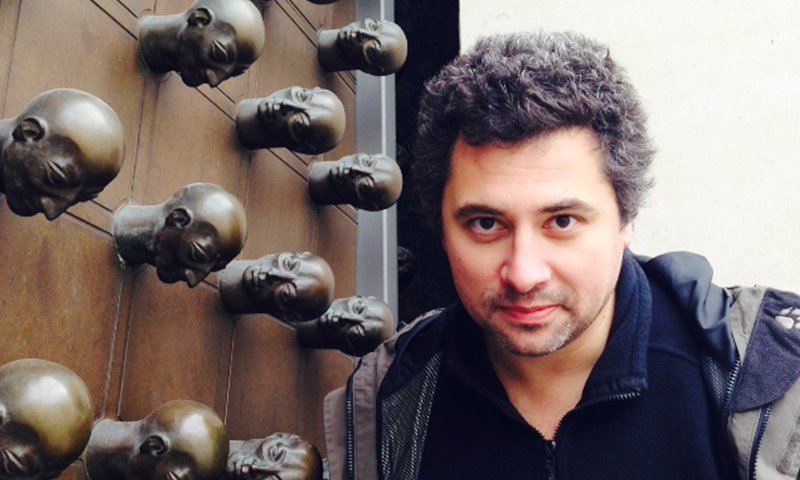 The film explores the metaphor of illness in the body and in society. Emmanuel is sentenced to death by his illness, while outside the sanatorium a whole population also has death awaiting them.

Yes, although maybe it’s not a very subtle metaphor. In Romania, that period – the 30s and the beginning of the 40s – is still considered by many in the intellectual milieu as a kind of Golden Age of Romanian society, politics and culture. And of course some of that is true, but this reaction came because after 50 years of Communist dictatorship people needed something to relate to in the past. For years, this was the attitude of most people, and it still is. So this film, at least for a Romanian audience, addresses the idea that this period wasn’t a Golden Age.

The film doesn’t have a single narrative line but feels like a series of fragments, episodes, diary entries.

It’s a bit like a jazz piece – it starts classical and then it gets more disorienting, more broken. Some people have complained that there’s no story, no drama, no conflict. I like these kind of fragmented structures – in a way, they are more true to the way we understand things. 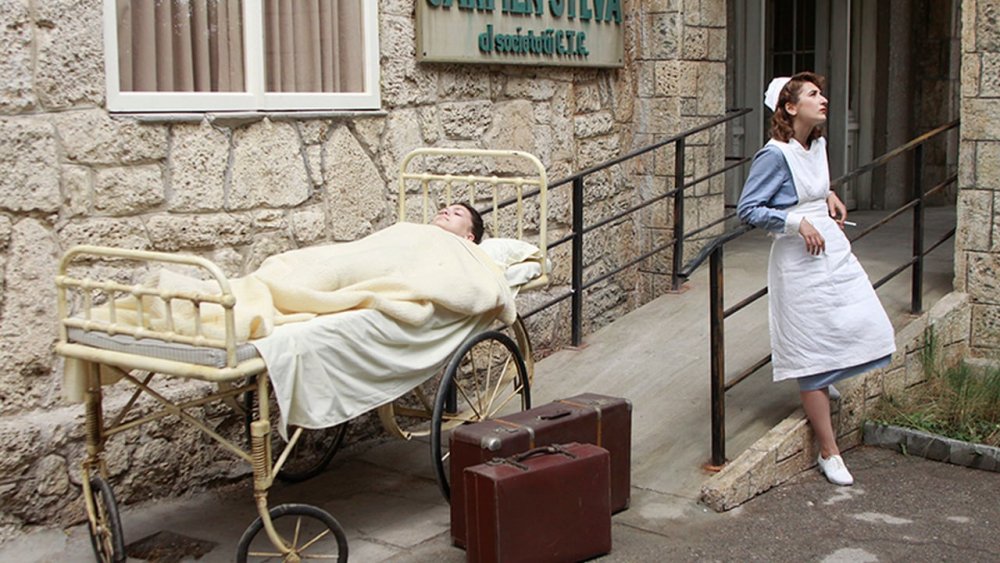 Your static shots in the film are often centred on characters who spend much of the film on their backs. That determines the entire visual style of the film.

This idea only came after we started the first day of filming. I had a bit of a crisis because I hadn’t realised it was going to be so uncinematic, in a way, with people being unable to move.

Then I discussed it with Marius Panduru, the DoP, and it was his idea – he said, “If things don’t move, why would the camera?” It simplified things. Once we found this way of telling the story, composing the scenes became effortless. And for the actors, it was easier – they only had had to lie down and play with the language.

The world depicted in the film is closed, its inhabitants are supposed to be ill or dying – yet an irreducible energy prevails. The atmosphere in the sanatorium is more like a party or a cultural salon.

The best way I can put it is to remember the start of Tolstoy’s Resurrection. He says, whatever happens during the winter, however mean people can be, after all the disasters, grass is still growing through the cracks in the concrete. This is something I took from Blecher’s books – the fact that the desire to live can be so great that even in abnormal situations, life obliges you to live. 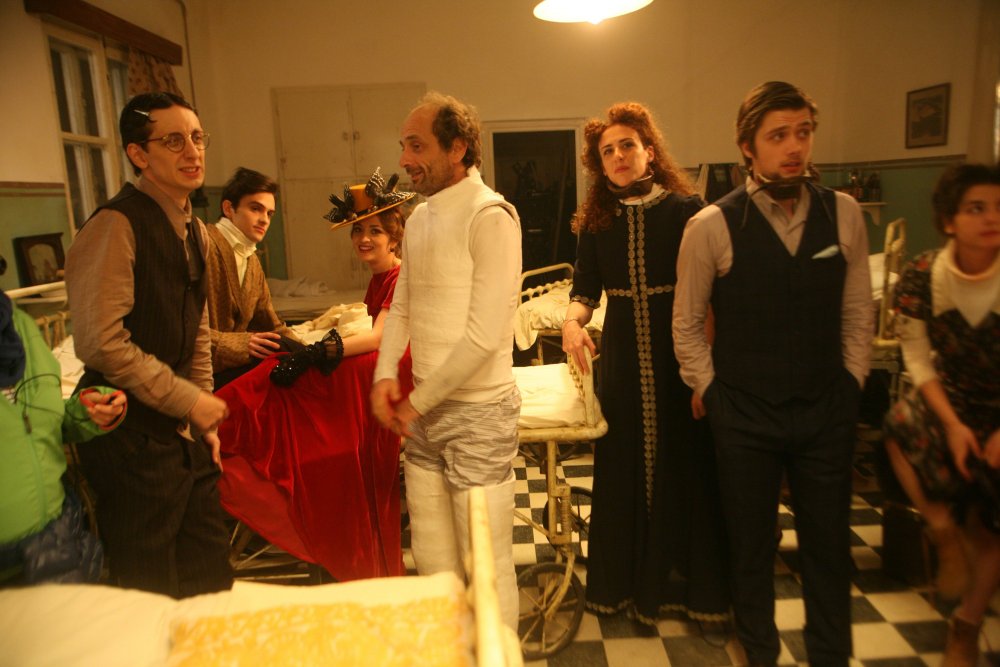 It’s very true of the way love and sex work in the film. The scene where Emmanuel and Isa attempt to have sex is horrifying, painful, yet also very funny.

There is a comedy of sexuality – and even of sickness. Sometimes when you look at things from a different angle, you can see the ridiculous side of it. Even a funeral can have a ridiculous side. Not for the one involved, of course.

You have now made two period films – this and Aferim! – which stand out sharply as exceptions to the overall stylistic palette of the new Romanian realism. 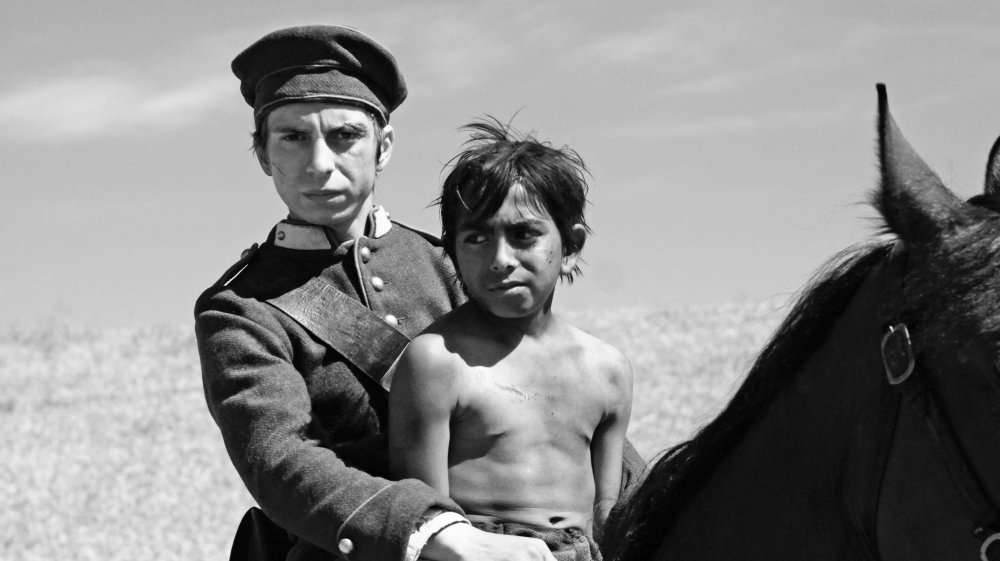 In Scarred Hearts, we become acutely aware of antisemitism as something that was normal in Romanian society at the time – as when one character casually says: “I’m not antisemitic – except in a political and economical way.”

That’s from Mihail Sebastian’s book [For Two Thousand Years]. It becomes something that’s normal for people to say, and we don’t immediately think, “Oh, this person is a monster.” We recognise that he’s part of the world he lives in.

It’s amazing to see how many of the big intellectuals in Romania at that time were involved very heavily in that. For me it’s painful to discover that in people I admire, like [the philosopher] Emil Cioran. I admire him for what he wrote in France, his aphorisms, his vision of life, but then you go back and see terrible things he said in his youth – his praise of Hitler, his approval of Kristallnacht. Almost all the important Romanian intellectuals of that time were pro-Nazi. What’s even more painful is that they never looked back and recanted. 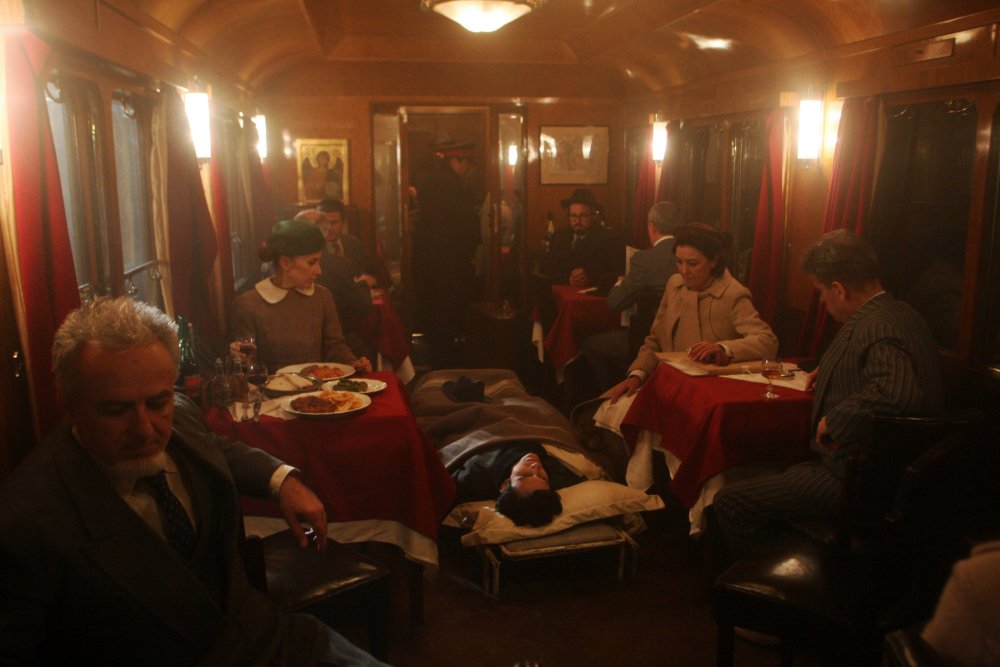 I’m not Jewish myself, despite my name, but now all the Romanian nationalists and antisemites consider me a ‘filthy Jew’. I’m interested in addressing things that were hidden, from my generation at least – like Gypsy slavery, or antisemitism in the 30s. These are things which were hidden from us – hidden in schools and in the history manuals. Romania was allied with Nazi Germany for four years – it was only at the end of the war that it changed. But in the Communist period, there were so many films, so many history books, which spoke only about fighting the Germans. Romania has a long tradition of seeing itself as always a victim. I think it’s more healthy to understand that, be careful, you’re not always the victim, sometimes you’re the bad guys.

Related to Radu Jude interview: “Scarred Hearts is like a jazz piece”