Death in Hebden Bridge: Jez Lewis on Shed Your Tears and Walk Away

Why is the West Yorkshire idyll of Hebden Bridge home to so many drug deaths and suicides? First-time director Jez Lewis only had to go home to find out. He reflects on the ghosts he uncovered in Shed Your Tears and Walk Away. 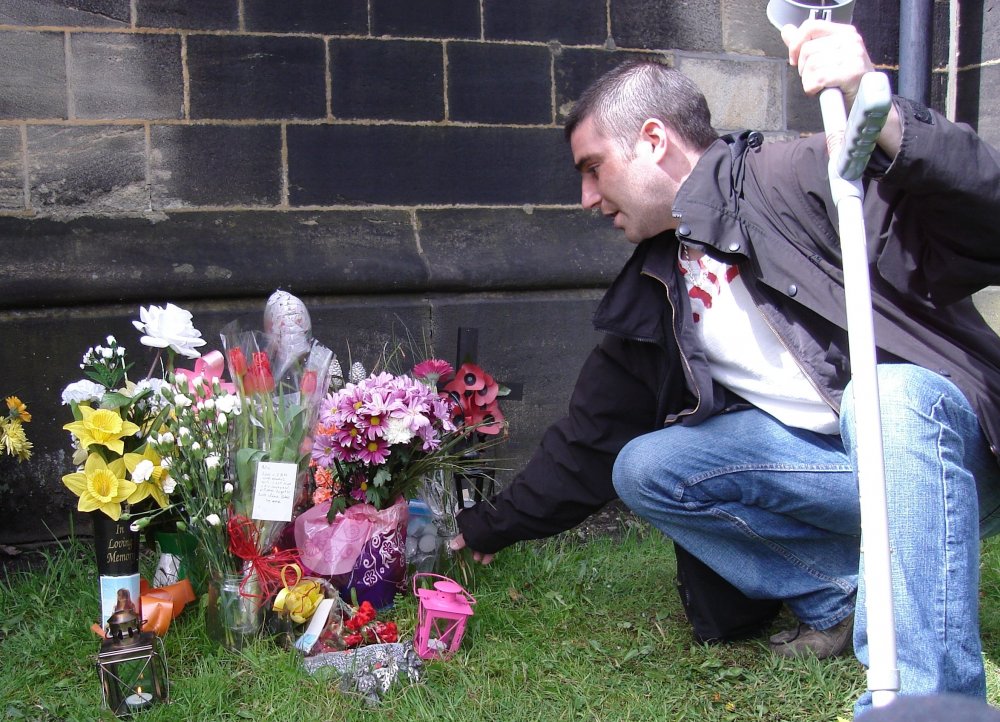 Hebden Bridge in West Yorkshire appears idyllic on superficial acquaintance, but Jez Lewis’ debut documentary Shed Your Tears and Walk Away exposes – with ferocious urgency and compassion – some of the darker realities beyond the green hills and tourist purview.

Lewis, who grew up in Hebden but now lives in London, was profoundly disturbed by the number of his former school friends who were dying, either by their own hand or of drug overdoses. Taking his small digital camera into the usually overlooked local parks and pubs, he came upon heart-wrenching despair and alienation at every turn, with solace inevitably sought in a camaraderie of the marginalised, fuelled by manic consumption of drugs and super-strength lager.

Lewis’ film gradually focuses in on two characters. Cass, an old friend mired in alcoholism, is attempting to clean up and elude Hebden’s claustrophobic clutches for a new start in London, the fragility and tentativeness of which soon becomes all too apparent. Then there’s Michael Silcock, aka Silly, whose own addiction is underwritten by traumatic memories of a stint in the French foreign legion, and the suicide of his brother.

KC: This is your first film; can you talk about your training as a film-maker?

JL: Twenty years ago I put myself through an evening class on film-making, but then I got distracted. But my partner Rachel, who’s also my producer, has always worked in documentary. There came a time when I thought, well, I’ll dip my toe in the water: documentary seemed like an attractive proposition.

I quite quickly got hooked up with Nick Broomfield. That’s an ambition some people have for their entire career, and for me it just sort of happened. He’d phoned Luke Holland to ask if he knew anyone who was available, and Rachel, who was working with Luke at the time, answered the phone and went “Well, yeah!”

I think that was a Thursday, I met him on the Friday and started working with him on the Monday. We did Ghosts and His Big White Self. The evening class was useful, but the real training was two years of working with Nick. The energy he puts into his work, and the confidence and the courage that he has, I really modelled myself on that. And he’s the executive producer on this film. Aesthetically, I’m sure there’s an influence too, but I haven’t done enough films yet for that to come out.

What drew you back to Hebden Bridge? At last year’s London Film Festival, you said that this was a film that had to be made.

For years, friends of mine in Hebden have either been committing suicide or dying of drugs overdoses. Mostly suicide. Lots of people, Broomfield included, said to me that I should make a film about Hebden. And I always said it was too much of a can of worms. Ultimately what convinced me was that nobody seemed to be joining the dots. Nobody seemed to be saying, “Hang on, that’s the fifth suicide off our street.” And to me, one or two is unlucky or normal, but five isn’t.

I did a bit of research, and the numbers were wildly over the national or even international expectations. So I thought, someone’s got to say something. But I only set out to make a 15-minute journalistic piece: here’s this beautiful town, these are all the wonderful things about it, but there’s also this other side. But somehow it snowballed into a feature-length film.

There must have been big risks, emotional and financial?

Definitely a financial risk, because we ended up remortgaging our home to fund the process. Screen East came in and gave 49% funding, but the other 51% – no-one’s got that lying around, and I wasn’t being paid, so we had to take a huge financial loan.

And, yeah, risky in that you don’t know if you’ll be able to put a story together. I filmed for a year and a half; the whole thing took two and a half years, end to end. It did take a terrible toll on me emotionally. I’d say for two years I wasn’t really myself. I’d come back from shoots and have to debrief for 24 hours before I could really engage with my kids, because I’d been so emotionally tuned out.

What I found was that, at any moment my brain had gone idle and I wasn’t otherwise occupied, I was living with ghosts. Two of the people who died some years ago, Emma and Bill, were very close friends. I can’t remember my childhood without thinking of them. Painting my daughter’s bedroom, for instance, it was as if they were there with me. That wasn’t a comforting experience.

At what stage did you feel that the film would become about Cass and Silly?

The first scene, where Silly gives us the title and tells us about his brother committing suicide, that really was the first shoot, it was the first time I was up there. And that was such a confirmation of my anxiety about what was going on in Hebden, I knew I wanted to know more about him.

Cass I always knew. He was a rock star in Hebden Bridge in his heyday. When he decided he was going to extricate himself and do rehab, I thought, “Well, that’s a story.”

There’s no pretence of objectivity or detachment.

I had a very early experience that made me switch between the two sides of Hebden, from interviewing the great and the good to all the lads in the park. They were the lads you’d normally avoid. I went to them and asked, “Are you alright with me filming?”, and one of them went, “Yeah, of course we are. Anyone who comes around here with a camera normally asks us to get out of the way.”

A lot of people go around there with cameras. Literally busloads. And that thing where they’re asked to get out of the way, it’s what Silly says later in the film: they feel alienated in their own town. And this was my response: here you go, this is for you. This isn’t an objective journalistic piece any more. This is your voice.

It’s a very rough-and-ready, direct film, but it suits the material.

I very definitely wanted it to be an experiential film. I described it as being like when you come away from a party, you can’t recall everybody’s names or who said what, but you have a feeling for that experience. That’s how I wanted the film to be. That you’re almost living their life for 90 minutes.

A couple of people have commented to me, “At one point I was wondering, ‘who’s next? I hope it’s not so-and-so,’ and then thought, ‘How on earth could I think such a thing?’” There’s a sense of wondering who’s next, which Silly had articulated. It’s a lottery here. It’s how they live, really. And I wanted it to be experiential in that sense, that you’re feeling the feelings they had. 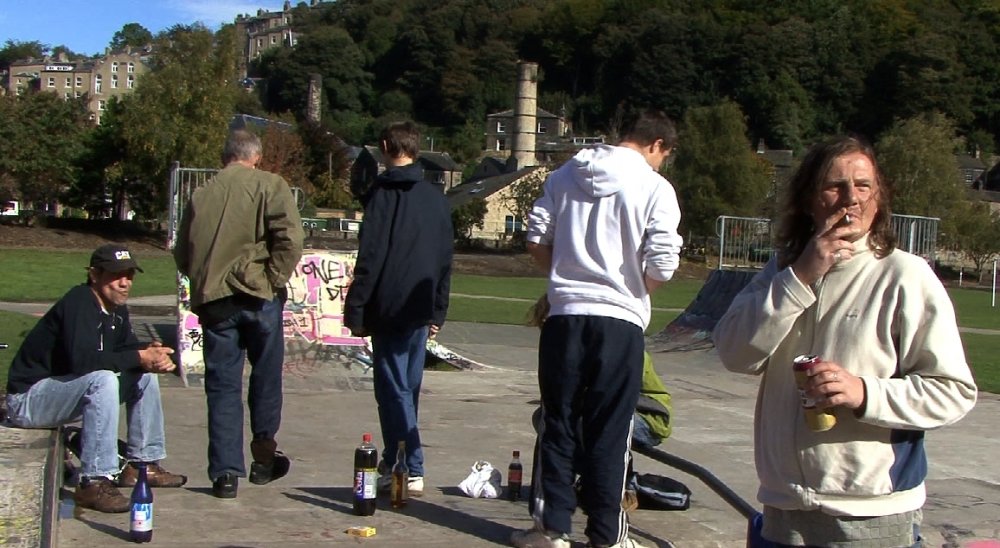 It’s quite a claustrophobic film: you stick to particular locations, often parks.

I wanted the film to be more visual, with some breathing spaces and scenic shots of the history of Hebden, mill chimneys and the old grandeur it had. But there just wasn’t the time. Eleven people died while we were making the film, not just the three you hear about in the film.

And your decision not to include experts was apt; it could have ruined the feel.

I think it was the right choice. I’d done interviews with the MP and the mayor, but they simply said “I don’t recognise what you’re describing”, and I said “Go to the park, then!”

But the interviews weren’t working, they didn’t carry the story, and I’ve got a rule that everyone must earn their place in the film. It’s like a ship. If you’re not actively earning your place in the crew then you’re out. And every scene must have at least two purposes. Those interviews were hardly serving one purpose, let alone two.

It begs the question: how is the film going to be received in Hebden?

It’s been shown, and everyone who’s seen it is supportive. A lot of others have been very defensive, and suspicious of my motives. And some have accused me of lining my pockets with other people’s misery.

Essentially, there are two online discussions. There’s one called HebWeb, being the people who write to the Guardian letters page and think that they deserve to be heard. And, well, they have been heard.

And then there’s the Facebook page, where you find the people who normally get asked to move out of the way for the camera – and they’re completely behind us. The Facebook page has 1,400 or so ‘friends’, at least 1,200 of whom are Hebden people, because that’s been the audience prior to the film getting a proper release. And that’s one in eight people of all ages in Hebden Bridge.

What about local politicians?

The mayor saw it. He came up to me afterwards and said, “Look, Jez, I’ve got to admit, I was one of the naysayers, and I’d had the impression it would be more prurient – but actually, having seen it, you’ve done a great job and made a great film.” And he went up to Michelle, Liam’s mum, and said “You tell us what we need to do, and we’ll do it.”

I don’t think anything happened from that, but other people too have written to me to say, “I was against the film, I was really suspicious, but now that I’ve seen it – wow, what a job.”

Related to Death in Hebden Bridge: Jez Lewis on Shed Your Tears and Walk Away