Westward the women! Distaff furies of the psychological west

There’s never been anything quite like Nicholas Ray’s Johnny Guitar, but many other post-war westerns of the era also found great post-frontier roles for women. 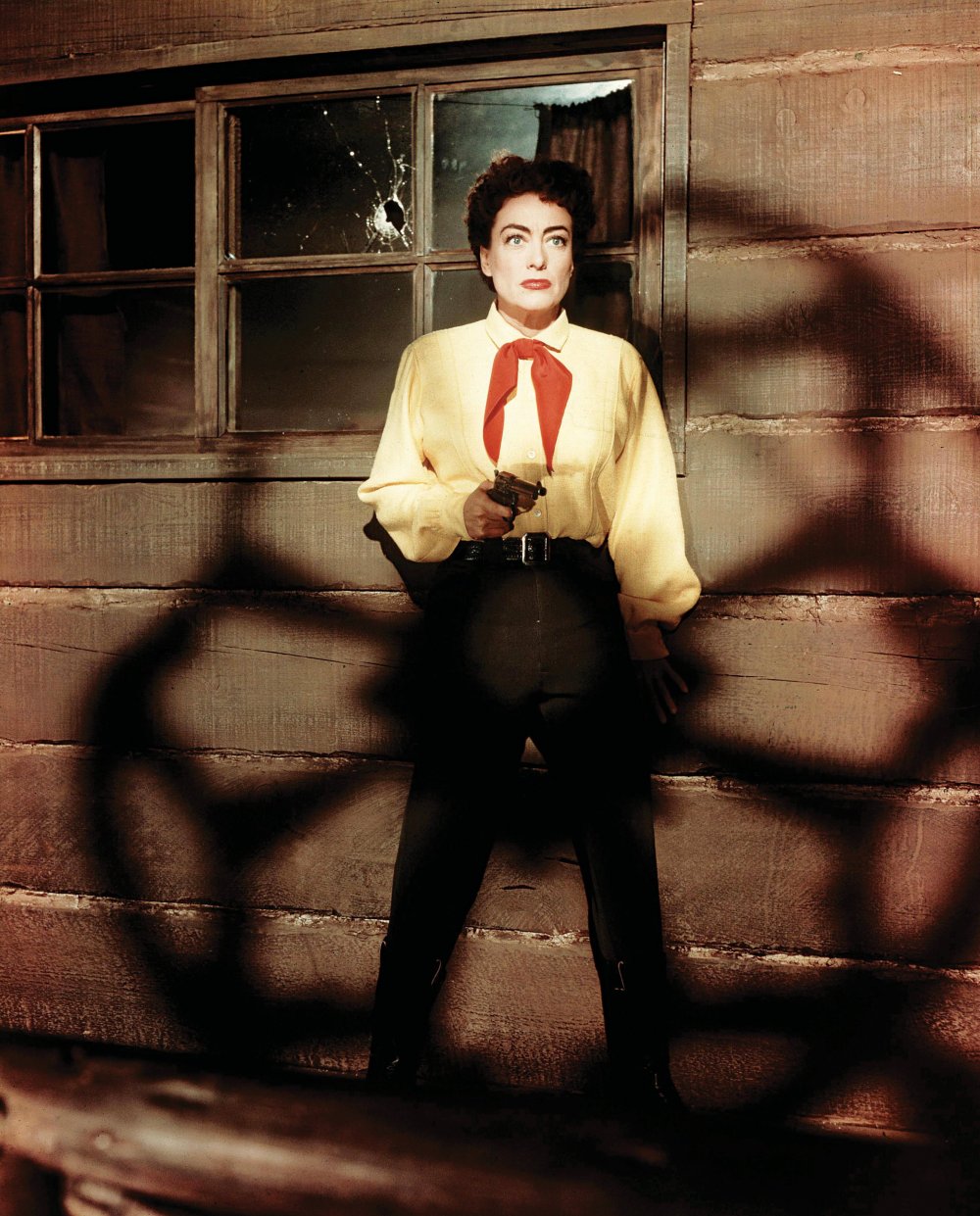 It starts like any other western, with a lone man riding along a rocky trail. Before the scene can settle into a familiar rhythm, explosions blast through the mountains and workmen swarm around the falling debris. Then gunshots echo, and the rider stops to look down in the valley where robbers are attacking a stagecoach. His face is eerily blank as he watches a body fall. Darkening the ominous mood, a dust-storm dims the air. Soon after, the stranger bursts into a palatial saloon, branded ‘Vienna’s’ and the delirious spell of Nicholas Ray’s Johnny Guitar (1954) is cast.

It’s part of the Sight & Sound Deep Focus programme Ride Lonesome: The Psychological Western, running throughout May at BFI Southbank.

This saloon is one of cinema’s great spaces: a cavernous, church-shaped room with a sleek design that is more mid-century modern than Old West. The warm, rich colours of polished wood and rough-hewn red rock are set off by gleams of green on the eye-shades of the dealers who stand sentinel beside their empty tables. Surveying her domain from a second-floor balcony, Vienna (Joan Crawford) is dressed all in black like a gunfighter, with tight trousers, a man’s shirt, short hair and a gunbelt slung rakishly around her hips. She stands ramrod straight and gives clipped orders, her face grimly set.

“Never met a woman who was more a man,” one of the dealers says of her, walking towards the camera as though he were addressing us, the audience. “She thinks like one, acts like one, and sometimes makes me feel I’m not.”

Johnny Guitar revolves around a feud between Vienna, who counts on getting rich when the railroad being built through the mountains turns her isolated saloon into a bustling town, and Emma (Mercedes McCambridge), who owns the local bank and who leads a posse to lynch her rival. Their behaviour affirms the general rule that in order for women, who are traditionally marginal in westerns, to take more prominent roles, they must act like men. (This principle is taken to cringe-inducing extremes in William Wellman’s 1951 Westward the Women, which celebrates the hardiness of female pioneers with an undercurrent of misogyny: compared to livestock as they are driven across the continent to marry men they have never seen, the ladies win grudging admiration for their ability to shoot, holler at mule teams, fight with their fists and rough it like men.) Johnny Guitar famously climaxes in a distaff gunfight – not the first: Joan Leslie as a saloon owner and Audrey Totter as an outlaw face off in Allan Dwan’s loopy Woman They Almost Lynched (1953), set in a Civil War border town run by a tough female mayor. 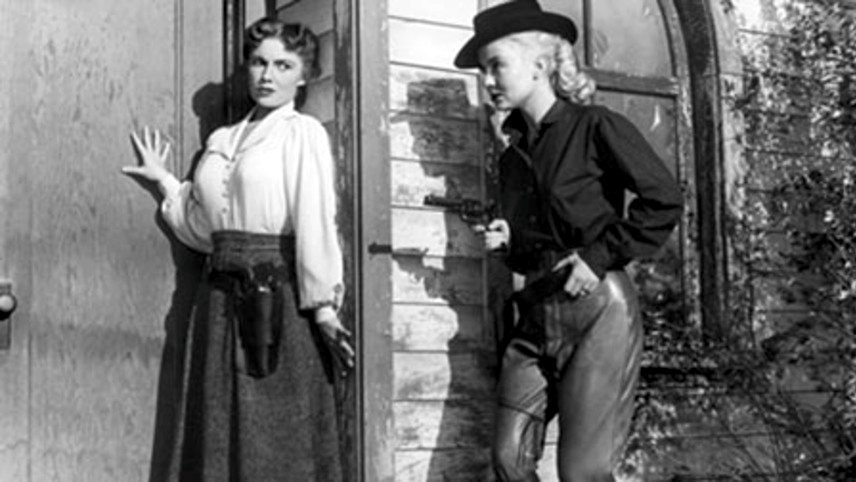 Westerns may be an essentially masculine genre, but Ray’s androgynous, operatic film reveals the flamboyance and feverish anxiety ingrained in that masculinity. With its theatrical speeches and stagey confrontations, its gorgeously coordinated colours – red rock and fire and copper and Johnny’s whiskey-hued jacket – the film is as stylised as a Douglas Sirk melodrama. But stylisation, ritual and melodramatic heightening are always a large part of westerns’ appeal. Survival in the cinematic West depends on performance, and westerns’ intense scrutiny of how men move, their mannerisms, bodies and clothes, subjects males to a gaze at once desiring and judgemental. François Truffaut compared Johnny Guitar to Beauty and the Beast – Beauty, of course, being Sterling Hayden in the title role.

The long, marvellous opening sequence in Vienna’s is a fluid, often funny series of contests and showdowns, fuelled by envy and jealousy and each person’s need to prove himself, or measure herself against another. Vienna holds off an angry mob with a gun and a showy speech. Johnny, a newly arrived stranger, is goaded into a fist-fight and challenged to prove his prowess on the guitar. Young Turkey (Ben Cooper) tries to prove he’s a man by showing off his shooting, and Johnny blasts the gun out of his hand. But the most intense rivalry is between the two women, and though Vienna taunts Emma for being jealous over an outlaw called the Dancin’ Kid (Scott Brady), her diagnosis (“You want the Kid, and you’re so ashamed you want him dead”) seems even more descriptive of Emma’s feelings toward Vienna – a kind of explosive, erotic hatred matched only by Jennifer Jones and Gregory Peck in Duel in the Sun (1946).

McCambridge’s performance maintains a steady pitch of barely repressed hysteria: with her shrill voice, bared teeth, and tiny eyes glittering with sadistic joy, she’s a grotesque figure of single-minded hate who finally repels even her followers. Joan Crawford, closing in on 50 and on the self-parody that took over her final years on screen, is none the less a far more complex figure, in whom brittle toughness masks stinging hurt, rage wells under polished poise, and a soft heart coexists with a demonic will. Johnny Guitar was written for Crawford (originally a novel by Roy Chanslor, the script was credited to Philip Yordan but heavily revised by Ray), and she tyrannised the production with her demands and insecurity.

A surprise hit on its release, Johnny Guitar has become a cinephile touchstone, especially revered by the directors of the French New Wave. Lyrical intensity and inspired lunacy charge both its big moments, like the indelible image of Vienna in a billowing white dress playing the piano while a lynch mob seethes around her; and its small moments, like the deft flourish with which Johnny catches a whiskey glass as it rolls off the bar. This is one of those rapturous, intoxicating movies that seems at times to be primarily about its own movie-ness. 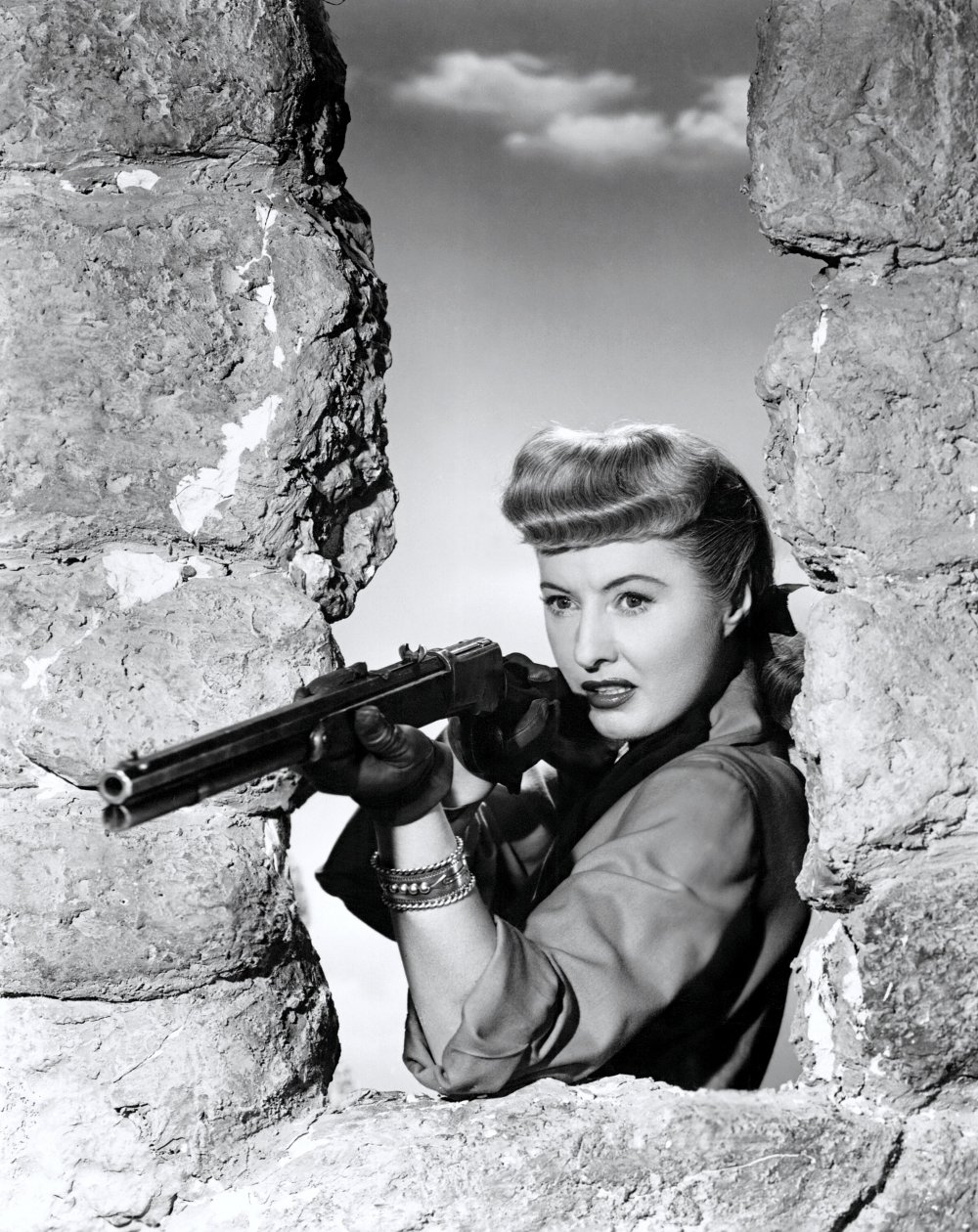 If there was nothing else quite like Johnny Guitar, there were many post-war and 1950s westerns that trampled the boundaries of the genre. Psychological westerns turned away from the sweep of history and unquestioning celebration of pioneer virtues to focus on inner conflicts and a more troubled, ambivalent view of the West. Noir westerns laid bare the dark side of those frontier virtues: self-reliance curdles into anti-social selfishness, and wide-open spaces represent not opportunity and freedom, but a vacuum filled by greed and obsession and lust for absolute power. These films increasingly depict not an unspoiled wilderness but a half-civilised West already corrupted by money, whether gold dug from the ground or bills piled on a poker table.

And with money, women could gain power and move beyond secondary roles as civilisers or victims. They could own saloons and gambling halls, like Vienna or the women played by Jane Greer in Station West (1948), Ruth Roman in The Far Country (1954) and Rhonda Fleming in Tennessee’s Partner (1954). They could control ranches, like Veronica Lake in Ramrod (1947), Barbara Stanwyck in The Furies (1950) and Forty Guns (1957), and Marlene Dietrich in Rancho Notorious (1952). 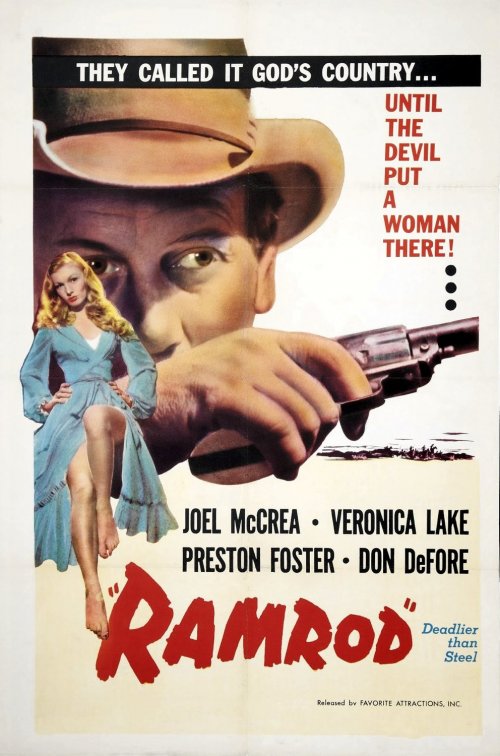 Like Johnny Guitar, these films are about women who fight hard and bitterly to hold on to the power and autonomy they’ve gained. In André de Toth’s tough-minded but subtle Ramrod, Lake’s character is stubborn, deceitful and unscrupulous, manipulating men and toying with the West’s simplistic moral code. But she is also the only person brave enough to stand up to a despotic rancher who terrorises any rival.

Stanwyck, who starred in more westerns than any actress of her era, starting as the sharpshooter in the title role of Annie Oakley (1935) and ending as the matriarch of television’s The Big Valley (1965-69), epitomised the exultant triumphs, frustrating limits and high costs of female power. In Anthony Mann’s thunderous The Furies, with its overtones of Shakespeare and Greek tragedy, Stanwyck flings a pair of scissors at her unwelcome new stepmother and destroys her father with a ruthless financial scheme, yet never becomes a villain. In Samuel Fuller’s outrageous Forty Guns, she gallops into the film at the head of a private army of men, and is mythologised in song as “a high-riding woman with a whip”, though dispiritingly she must meet her match and prove she is “only a woman after all”.

In Fritz Lang’s Rancho Notorious, Dietrich’s imperious, amoral character, who runs a ranch where she hides outlaws in exchange for a percentage of their loot, is ultimately more sympathetic than the rigidly fixated hero played by Arthur Kennedy, who is seeking revenge on the man who raped and killed his fiancée. This is a film as luridly overheated and brazenly stylised as Johnny Guitar, and both centre on women branded by a mysterious past. A classic noir theme, the long shadow of the past falls across such westerns as Pursued (1947), The Naked Spur (1953), Ride Lonesome (1959) and The Hanging Tree (1959). 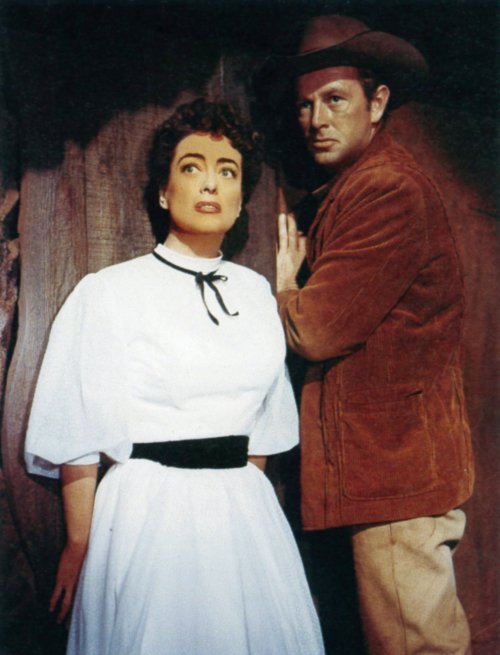 At its heart, Johnny Guitar is about lovers meeting after five years apart, with an unspecified bitter past behind them, and wondering whether they can start over. In the film’s most celebrated scene, alone in the wee hours of a sleepless night, Vienna and Johnny rake over the smouldering coals of their memories. Underscored by melancholy, brooding music, their dialogue has an incantatory rhythm, as though they were quoting lines to one another, speaking out of their private reveries. They are both haunted. He is trying to distance himself from his past as Johnny Logan, an infamous gunfighter – he still has the reflexes and instincts of a killer. She starts to tell him what she had to pay “for every board, plank and beam” of her place, implying it was herself she sold. For her the hurts and humiliations of the past are still raw, something she can taste, but he tells her they should dismiss the years of their separation as unreal, a bad dream.

The whole film has the vivid illogic and compulsion of a dream, in which hidden desires, fears and furies are boldly acted out. So intense are the emotions of these women and men, it’s as though all the violence, the explosions and flames and flying bullets, were really inside them.

Related to Westward the women! Distaff furies of the psychological west