Mexico earthquake: how the media responded

The strongest earthquake to hit Mexico in a century prompted an almost immediate media response. The initial rush of hashtags and memes were followed by film stars drumming up funds and a ‘RubbleCinema’. Soon even escapist cinema took on a new meaning. 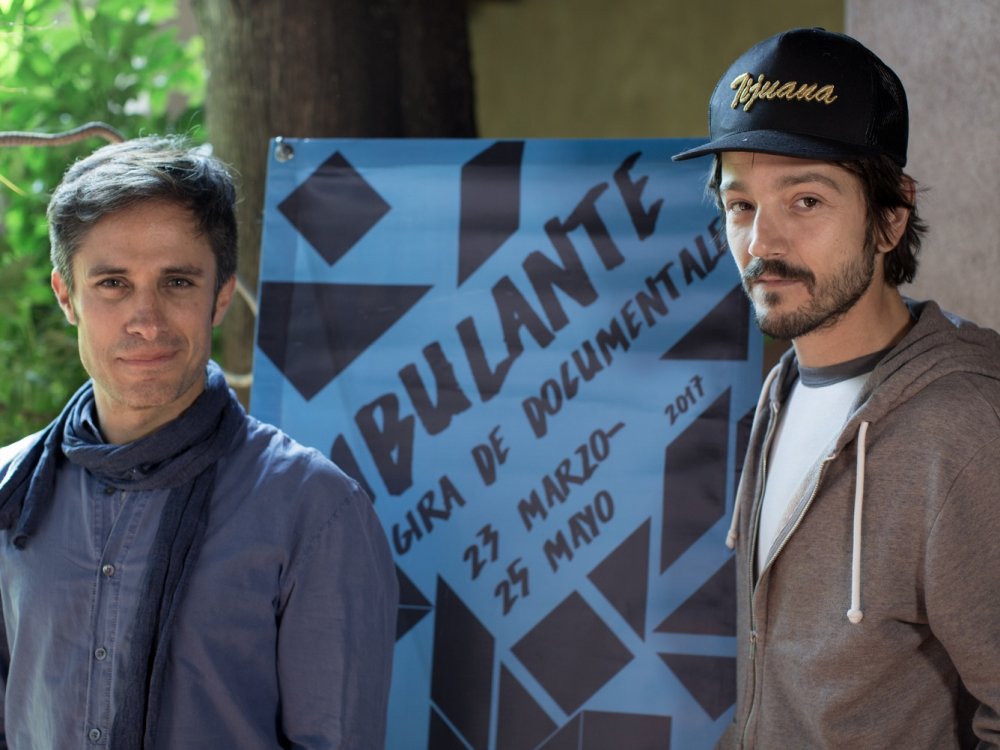 On the morning of 19 September 2017 there was an earthquake drill in Mexico City. Later that afternoon, as my hotel room rocked like a ship on the high seas, there was no doubt that this was the real thing.

After three seemingly endless minutes of tremors, I turned on the TV. Of the two heritage networks, Televisa was still showing an old telenovela; Azteca, its rival, had already switched to non-stop quake coverage. The networks would improvise competing slogans: the first’s was the rousing “¡Fuerza México!”; the second’s a perhaps over-optimistic “México de pie”. Mexico, sadly, was not on its feet. Twitter was soon full of surreal mobile phone videos: shiny new skyscrapers rocking along the grand avenue of Reforma, the placid touristic canals of Xochimilco whipped into a frenzy by seismic activity.

While the Historic Centre where I was staying was little affected, two fashionable neighbourhoods further south favoured by film folk were rocked. Roma and Condesa, where beaux-arts mansions mingle with minimalist apartment buildings, are reputedly the homes of hipsters and movie stars (Condesa was the location for Amores Perros’s car crash, back in 2000.)

Along Roma’s central boulevard of Álvaro Obregón, lined with neo-classical statues and well-pruned topiary, a large building collapsed. This became, along with a devastated school, one of the recurring, heartbreaking images of post-quake coverage. It is the street where Alfonso Cuarón shot the film that started Mexico’s still burgeoning rom-com cycle (Solo con tu pareja, 1991) and which now hosts the Mexico City offices of the Morelia International Film Festival, perhaps Mexico’s most important. While the launch of this year’s edition of the festival was delayed, the offices were unharmed. 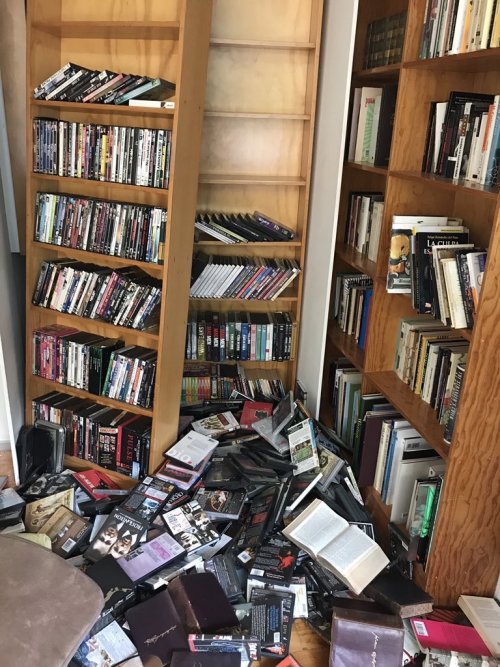 Less lucky was the home in Condesa of Fernanda Solórzano, senior critic of respected Letras Libres magazine and a S&S contributor. She posted pictures on Twitter of her apartment’s wrecked interior. The books and DVDs were familiar to cinephiles as, tidily placed on shelves, they had served as a background to Solórzano’s self-shot video reviews. Now they were scattered all over the floor.

September is the ‘patriotic month’ in Mexico and the nation had just celebrated its Independence Day. In an ironic mise en scène reminiscent of a cheap disaster movie, tinsel decorations in the national colours of red, green and white were now juxtaposed with flags at half mast or, worse still, piles of smoking rubble. Amid this chaos, the tragedy posed a thorny scheduling problem for TV broadcasters. The network morning shows, Hoy (Today) and Venga la alegría (a now incongruous Long Live Happiness), first pivoted from their accustomed celebrity guests to seismologists, priests or trauma therapists. Soon they found a more amenable angle: the many stars who joined masses of Mexicans (especially the young) as volunteers at disaster sites.

Later, celebrities themselves improvised charity schemes they could promote on the web and television. Eugenio Derbez, the king of local comedy on Mexican film and TV (his latest feature How to Be A Latin Lover crossed over to US cinemas), promoted the hashtag #LoveArmyMexico. Global stars Gael García Bernal and Diego Luna (still fondly remembered from 2002’s Y tu mamá también and more recently founders of the successful Ambulante documentary festival) sought out donations both at home and abroad where Luna appeared on US late-night talk shows. Mexico’s twin TV gossip magazines also flew the flag, devoting whole issues to the rescue effort and praising a new found sense of solidarity. TVyNovelas went with Televisa’s patriotic “Fuerza México”; TVNotas with a defiant “This is the true Mexico”. Most moving was a simply-worded poster pasted over cracked city walls. It read, with self-deprecating modesty and tempered optimism: “When I grow up I want to be a Mexican.”

Such unity of purpose was deeply affecting, especially in a country which is in normal times (like so many others) bitterly divided along partisan political lines. But more ambivalent memes quickly made themselves felt. The raised fist seen everywhere was a sign not (or not only) of brave defiance but of the call for silence made by rescuers listening out for still hidden victims. At the collapsed school that was sadly ubiquitous on TV screens, there were rumours of a trapped child, the unusually named Frida Sofía. When the case was revealed as a hoax, there was much soul-searching among media folk, including TV critic Álvaro Cueva, who kept up a daily commentary on the coverage in newspaper Milenio. Televisa was accused of turning all too real tragedy into mere telenovela. By coincidence, a rescue Labrador was also named Frida. Said to have saved some 50 people, she became a media celebrity. The image of Friday wearing a distinctive visor to protect her eyes from dust was silkscreened on to Warhol-style prints to be sold in the street to benefit quake charities. 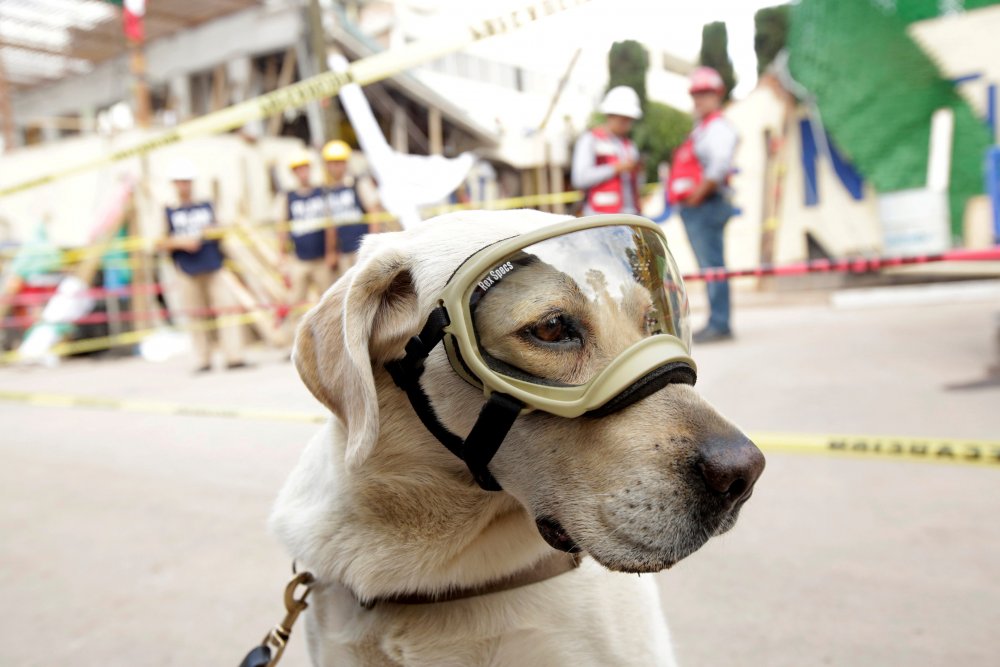 Frida, the Mexican rescue dog who became a media celebrity

A new organisation also took up the image of a rescue dog as its profile picture on Twitter. Cinescombros (RubbleCinema) organised screenings of independent films, including programs for children, in the tents where newly homeless people were obliged to spend the night. A volunteer dressed as Batman also visited the shelters to entertain the smaller victims. Meanwhile many cinemas, including the huge complex of the Cineteca or national film theatre (equivalent to the BFI), ceased all programming and transformed themselves overnight into donation centres, accepting and distributing food, clothing, and medicine to quake victims. Conversely there was new concern for the survival of fragile picture palaces, which had previously been closed to the public and now risked collapse. The famed Churubusco Studios, Mexico City’s equivalent of Hollywood’s backlots, was also hard hit. 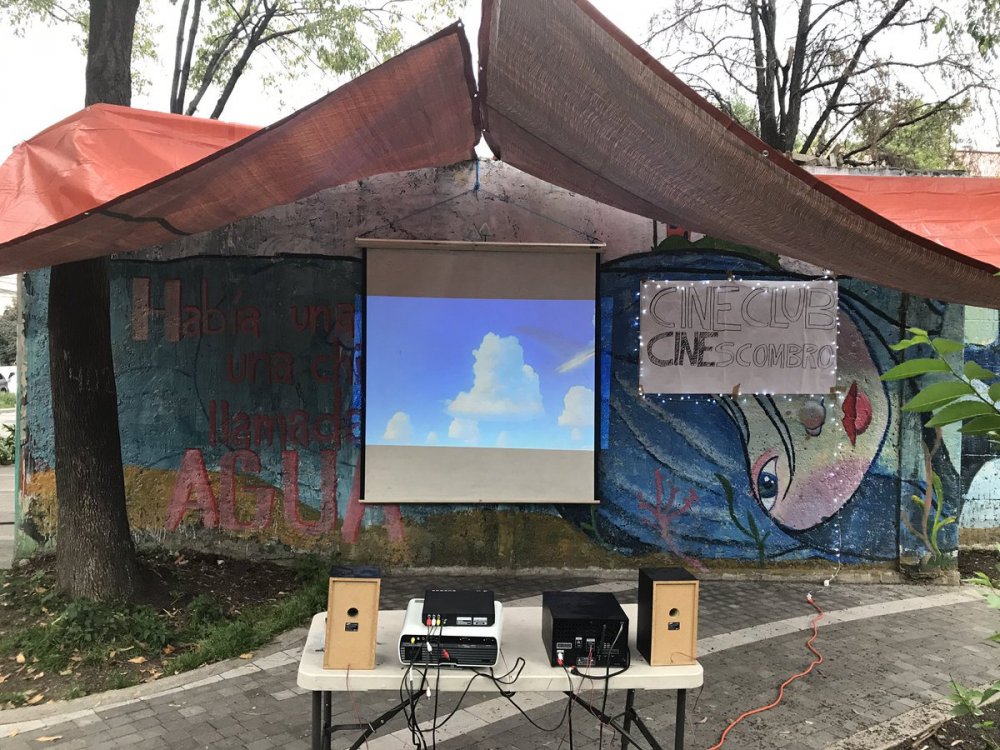 Two relatively new arthouses had contrasting experiences. The Casa del Cine (Cinema House) is housed in an atmospheric period building in the Historic Centre and had been screening titles from Mexico’s annual French film festival. At the time of writing (almost two weeks after the tragedy) it remains closed, awaiting inspection by engineers who must evaluate the safety of thousands of such buildings before they can be reoccupied. Cine Tonalá on the other hand is a trendy cinema in the now damaged colonia of Roma, which has won a name for itself by combining indie film with gourmet food and live events. Just days after the tragedy, it was already hosting a standup comedy night for chilangos (Mexico City residents) who were much in need of light relief.

In a city where the dead now numbered in the hundreds (thousands had been killed in the 1985 quake that also occurred on a 19 September), perhaps a little pity can be spared still for the films and TV series that had the misfortune to premiere in the week of the tragedy. Arthouse Cine Tonalá was showing the inspiring documentary Made in Bangkok, about a Mexican transgender soprano who travels to Thailand for surgery. When the commercial chains reopened, their main local release was romantic comedy Me gusta pero me asusta (I Like Him but He Scares Me) in which an unfashionably dressed youth from the narco-ridden north of Mexico courts with sweet persistence a silly, snobby girl from the capital.

Both titles had taken years to achieve their precious theatrical release. However when I saw Me gusta, charming but trivial, in a sparsely populated Cinemex theatre that had just reopened in the Centre, it came now with added pathos. The apartment the heroine shares with the twin sidekicks of an Argentine girl and the inevitable gay best friend is located in a Condesa street that is explicitly named as Amsterdam. This is an idyllic park-fringed circuit, which would become notorious as one of the hardest hit in the whole megalopolis. It was difficult not to think of the dust-covered victims on TV when watching this candy-coloured farce in the cinema.

Maybe it was just the subdued mood or the damp and chilly weather, but when normal programming restarted on TV, the new novelas seemed strangely dark for a genre that was once the preserve of true romance. Televisa’s Caer en tentación (Yielding to Temptation) was a downbeat and claustrophobic chamber piece on twin adulterous couples. Azteca’s Las malcriadas (Rude Girls) boasted no fewer than five female protagonists, each exemplifying a painful social issue, from domestic abuse to forced sex work.

Having previously avoided the damaged areas while rescue work was continuing, on my last day in Mexico City I took a walk through Roma and Condesa, whose biggest problems had once been dog-owner etiquette and restaurant noise. The densely built streets were now punctuated by cavities where homes had been shattered. The jewel-like parks, previously familiar as picturesque movie locations, now housed great white tents, refuges for victims who had not found shelter with friends or family or who hesitated to leave their possessions unguarded in shattered homes.

It has to be said that poorer boroughs of Mexico City that suffered similar losses, such as Iztapalapa in the east and Xochimilco in the south, received somewhat less media coverage. And a quake just weeks earlier had devastated the already impoverished southern states of Oaxaca and Chiapas. In the capital, however, the media response (from cinemas, via TV, to social media) had already revealed a great city determined to get back on its feet as soon as it could. This will be a painful process that, if the 1985 earthquake is any guide, must take not months but years. It will be time enough for film and television to work through a national trauma for Mexicans who have already proved themselves to be newly active and engaged, both as spectators and as citizens.