Blue-pencil sense and sensibility with the writer-producer of Ride with the Devil and the writer-actor of Nanny McPhee.

The BAFTA screenwriters series of talks can hardly have sequenced two more wildly contrasting sessions than those of James Schamus and Emma Thompson. What makes them attractive to compare is that they both expose everyone’s boredom with the screenwriting-manual trade and its Aristotlean orthodoxies. Schamus, who refused any suggestion he might give “advice and inspiration”, pronounced the word “acts” like he had something in the back of his throat he needed to expectorate. Thompson just ignored structure, concentrating most of her remarks on the effectiveness of ellipsis.

As I try to summarise Schamus’s talk, I am grateful for Scottish Enlightenment philosopher John Locke’s apology to “men of large thoughts and quick apprehensions” in An Essay Concerning Human Understanding. “To such masters, I profess myself a scholar,” he wrote. When it comes to the former Focus Features CEO, I feel the same way. The screenwriter of such exquisite Ang Lee directed films as The Ice Storm and Lust, Caution, Schamus is also known to be prodigiously knowledgable about everything relevant to narratology, including the works of the great philosophers.

Wearing his trademark bow tie, Schamus began by threatening a lecture in German aesthetics, and that he’d be cranky and ornery, and implied that for screenwriters to think of themselves as artists is a mistake. People thought he was joking – he was, but only about being ornery. He said he didn’t know what it means when people say screenwriting is an art. Do we, he asked, come out of a film and say, “That film was terrible. The script was great, but the film? What a terrible job they did with that script,” in the way we do when we come out of a Shakespeare play and complain about the interpretation? We do not.

A screenplay, Schamus averred, “is 124 pages begging money and attention”. Screenwriters are in a hybrid space where they want to create intellectual property but they want to get paid for it. Behind these remarks was what seemed Schamus’s central point: that if screenwriters thought of themselves as workers rather than artists, they might be able to bargain for better rewards in regard to films. 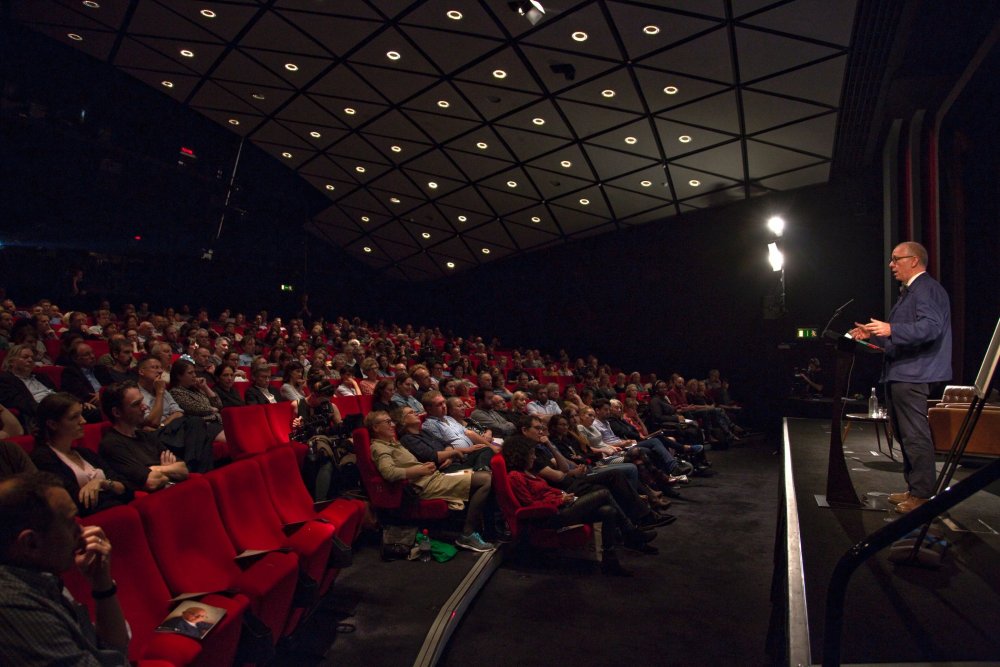 To reinforce his idea of the screenplay’s true nature he described its invention by Thomas H. Ince, one of the early producers who first came to Hollywood (and who died under mysterious circumstances after a visit to newspaper magnate William Randolph Hearst’s yacht). To keep control of costs, Ince ensured that all his films used a shooting script with a scene plot and a shooting schedule. Ergo the screenplay was all about money from the beginning, and indeed Schamus recruits the history of aesthetics from Hugo Münsterberg to the Frankfurt School to compound that idea with Theodor Adorno’s contention that “he who speaks of culture also speaks of administration”, that in defining art as priceless, we assert the use value of everything else.

Three years ago Schamus gave a brilliant keynote address at the BFI London Film Festival that revolved around the question of whether or not you own the personal story of your life. I have only a patchy remembrance of that talk, but it was relevant here to Schamus’s contention that our attitudes to the screenplay come from two ideologies: one of authorship and the other of copyright. The latter, he says, has little to do with authorship, but is about establishing a monopoly position.

One revelation new to me was that no one could copyright photographic images at first because they were seen as imprints of reality. Eventually, the movie studios won the argument by saying that choices of image, angle and duration plus a voiceover amounted to subjectivity. So when you see the copyright line on a Hollywood mov, you don’t see the name of an auteur but that of the studio, and what’s copyrighted is not the story but its telling. 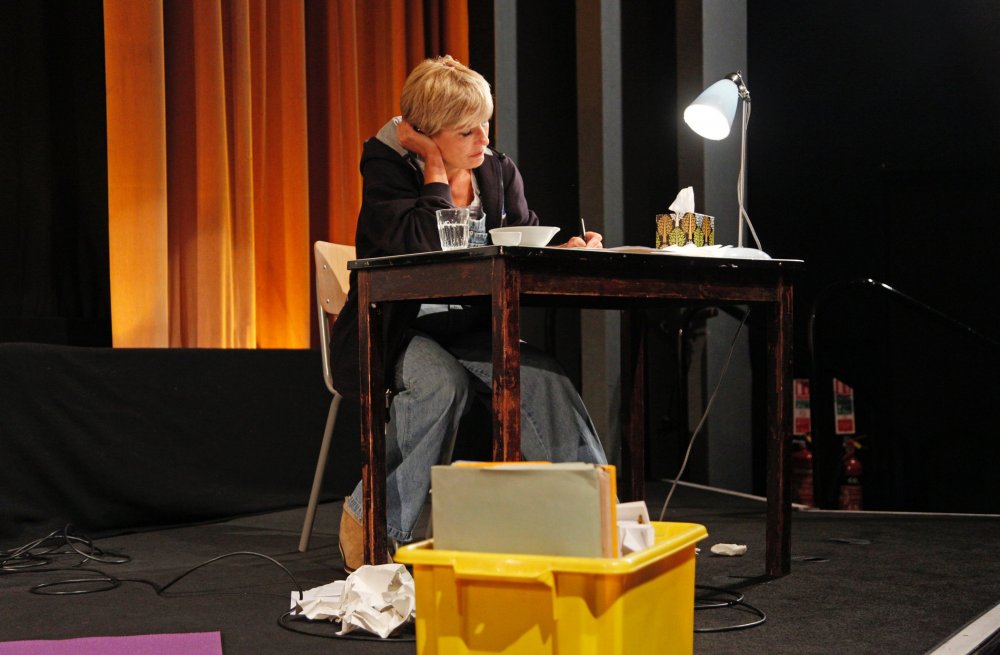 No introductory declarations were made by Emma Thompson. She was already on stage as the audience filtered in. Dressed in denim dungarees and a dive-club sweatshirt from the blue company, she was sat at a small writing table scribbling and muttering to herself with crumpled sheets of paper around her bare feet. The bravura moment came when she fished out a hoover from behind a low screen and began to use it. This caused an odd misreading for me when a man came down the aisle and began questioning people as to where his seat number was. He was doing it slightly eccentrically, like an ‘actor’, and I suspected for a moment he was part of the performance.

Once we were all seated, Thompson shot off to change and we were treated to an episode of The Magic Roundabout in which Dougal (a dog puppet) stands to be elected as prime minister. Emma Thompson’s father Eric was renowned for having subversively re-voiced Serge Danot’s peculiar French children’s puppet show, with the emphasis on deflating the characters’ delusions. Apparently Eric loathed the French and, when they complained because they thought Dougal’s name was a deliberate dig at de Gaulle, he though it was “evidence of their complete egocentricity”.

Emma Thompson did do the career-biog bit, and bravely since an early theme was to failure of her feminist comedy sketch and monologue-based television series Thompson. She even gave us a stand-up monologue – about a posh dimwit who meets a Vietnamese boat person at an art gallery – and showed a sketch from Thompson about sexual ignorance amongst newly married Victorian ladies, but added that after savage reviews, “I didn’t write sketch comedy any more. I never wrote another monologue. I never wrote another sketch, and I think that’s quite tragic, actually.”

You’d expect Thompson to have illustrative funny stories and there were a few – the Jane Austen obsessive on a plane who, when Emma told her she’d cut out Anne from Sense and Sensibility, turned on her heels and walked away without a word; the moment when her hero Clint Eastwood put his Oscar (for Unforgiven) next to hers (for Howards End) and said “we did it!” – but it was the odd glimmering script insight that the audience soaked up. Her examples of cut scenes – the “only connect” scene from Howards End, Daniel Day Lewis smashing up his cell in In the Name of the Father – underlined her belief in editing.

She shared Jim Sheridan’s advice about endings – that the end should be like a magnet and all the story elements like iron filings moving more quickly and closer together the closer they get. It’s important to her that she cries on reading back certain scenes (weeping was a theme) and probably the most pragmatic script tip she gave, given that she’s such a successful actor, was this: “Stage directions are very important to me… If they’re witty and well-written then I know I’m in good hands. If they’re cursory, or indeed banal, then I am very unwilling to read the bloody dialogue.”

I liked her revelation that she doesn’t get treated much better than any other screenwriter, her smart line about putting the screenplay away in a drawer – “something will happen in your mind and something will happen in the drawer” – and her explanation as to why she writes the first five drafts by hand (because she think the neatness when it’s typed in hides flaws so she only wants to transcribe when she can no longer improve the handwritten text).

Thompson and Schamus are better known as actor and producer respectively, though the latter best ‘acts up’ his professorial role (he teaches at Columbia). Schamus was most ‘normal’ when fielding a question about Hulk, when he behaved exactly like ‘the talent’ always behaves about the one piece of work with a bad rep, telling us that it’s ‘fresh’ on Rotten Tomatoes and made more money than The Incredible Hulk. Thompson was bracingly steely with audience questions, emphasising the need to make sure that your script isn’t actually bad. ‘Prepare for failure’, they both seemed to say, each in their own way, ‘and you might succeed’.

Related to Writing lessons: James Schamus and Emma Thompson, from desk to podium