With screen performances – conscious or not – increasingly the currency from media to the theatre of justice, could more documentary literacy mean better citizenship? 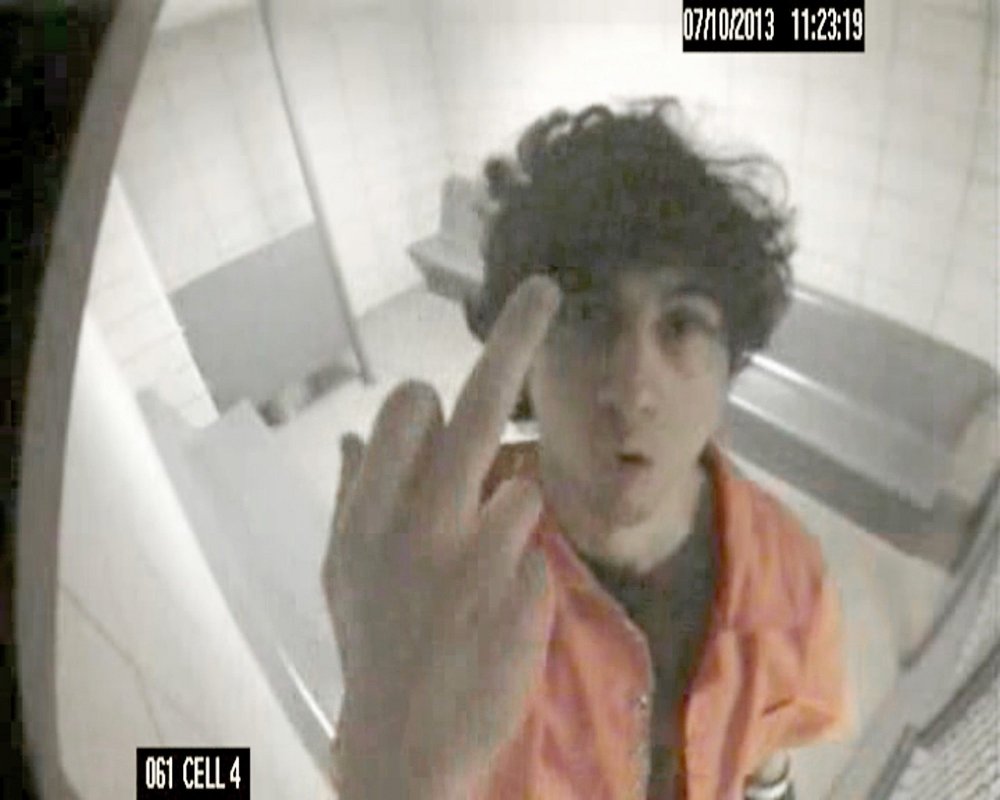 Dzhokhar Tsarnaev was convicted on 8 April for his role in the 2013 Boston Marathon bombing that killed three people and injured hundreds more. Despite his relative youth (he was a teenager when he conspired with his older brother Tamerlan to carry out the heinous acts), Tsarnaev obviously deserves to be appropriately penalised. He is facing a possible death penalty in a sentencing trial that is ongoing. One key image that has been used by the prosecution to convince the jury of Tsarnaev’s malicious, terroristic intent is of the young man sticking up the middle finger to a camera while in custody.

It is a picture of furious (if pedestrian) rage. It’s fairly easy to look at this still image and to reason that the young man behind the obscene gesture has no remorse for his actions. Whether or not a person considers himself an American patriot or supports capital punishment or has a direct connection to the Boston attacks and the days of legitimate terror that followed, it’s difficult not to view this middle finger as a defiant, unsympathetic gesture of anti-social antagonism. In a world where drone strikes erase ‘terrorists’ that the American public never sees, this is one recognisable, directly confrontational image that can be made to embody all the tumultuous anxieties and reactions that we’ve collectively experienced since 2001.

As Glenn Greenwald has pointed out, however, this image is merely one frame of a surveillance video taken in July 2013, which features Tsarnaev pacing around what is presumably his holding cell, displaying a range of anxious, relatable emotions that could be described as anything but ‘rage’. He paces, checks his hair, climbs up closer to the mounted video camera, flashes a peace sign and a punkish, childish snarl and quickly pops the middle finger, before climbing back down to sit. In this context, the still image of ‘unremorseful wrath’ is quickly revealed to be something much closer to ‘teenage petulance’.

Yet the still image has caused a media firestorm and has become a focal point of Tsarnaev’s sentencing trial. The full video was reportedly shown in court only after a full day of the still image dominating the proceedings. The narrative it helps create of Tsarnaev as a merciless, unrepentant terrorist could become a factor in the jury’s decision to let Tsarnaev live for the rest of his life in prison or be put to death.

Putting aside the complex question of what would be an appropriate punishment for Tsarnaev’s terrible crimes, the issue over the relationship between the middle-finger image and the full video from which it was excerpted brings to mind a particular strain of media illiteracy that has become more of an issue in this age of endless image creation/reproduction. Whether it’s 17-year-old shooting victim Trayvon Martin’s Instagram pictures or the video of 18-year-old Michael Brown supposedly stealing cigars hours before he was gunned down by a Ferguson, Missouri police officer, victims and perpetrators alike are being turned into simplistic characters that can more easily feed the cable-news industry’s rapacious need for ‘story development’.

Simplifying reality so it can be more readily understood has always been the domain of television news. Furthermore, turning the principal players in criminal trials into simple ‘good guys’ or ‘bad guys’ has always been the job of lawyers attempting to elicit a conviction or mount a strong defence. Narrativising the chaotic world is what we do to make sense of the world and maintain a functioning society. However, with the explosion we’ve seen in the past decade in the amount of images manufactured by such relatively new ubiquities as smart phones and surveillance cameras, and with so many people responding to those omnipresent recording devices by creating personas or ‘personal brands’ or otherwise exaggerated versions of their real selves, we’ve seemingly entered what could be called a new era of mass narrativisation.

If all the world’s a stage, and if we’re all constantly recording ourselves and each other on that stage, then it might be said that we’ve become nonfiction characters in a kind of strange, endless live-stream performance documentary. With all the complexities embedded in the rendering of nonfictions, it becomes troublesome when our media and legal institutions get overly enamoured with, and wrapped in reproducing, the permanent state of ‘fictionalising reality’ that constitutes the form. I’ve written before about my desire for viewers of documentaries to better understand the volatile, intricate nature of nonfiction performance, but when put in this sort of Orwellian context, this interest can be seen as having to do with something more consequential and more frightening than a relatively straightforward question of aesthetics.

Documentaries are made of characters constructed out of recorded observations of real people. These performances are often volatile mixes of real and staged selves. A deeper understanding of this unstable relationship might allow us to better perceive many other kinds of performances we now frequently find in the news media (or the court room). I’d say that filmmakers, critics and scholars interested in creating this deeper understanding of documentary aesthetics might also be interested in thinking about how their work impacts our broader media literacy. If we can get people to watch documentaries better, with a better comprehension of the inbuilt complexities of the form, perhaps we can get them to watch the news better, or to be better equipped to deal with the often crude narratives they’re presented with daily. 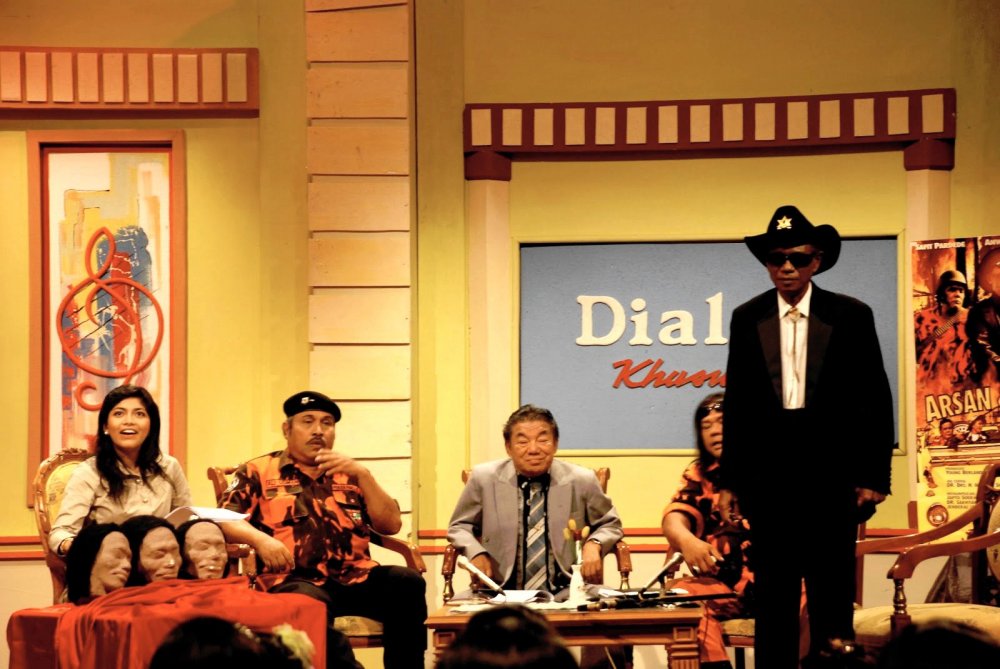 Creating this understanding seems to be one of the goals of Joshua Oppenheimer’s use of the talk-show scene in The Act of Killing. By this point in the film we’ve seen multiple instances of Anwar Congo and his cohorts dramatising the film’s central interest in the interior psychologies of killers who remain in positions of political power, but the scene where they appear on television and talk freely and glibly about their exploits may be the film’s most chilling. Exploring the layers of performance and identity in what might be called the ‘cinema space’ of the rest of the film can’t compare, in many ways, to the awfulness of those same performances being broadcast over television airwaves and in front of a rapidly accepting studio audience.

At this point in our collective viewing history, most people clearly understand how manipulative and exploitative television can be. This idea that the news media creates simplistic narratives and easy characterisations is surprising to few. Yet, as the outrage over NBC news anchor Brian Williams’s apparent embellishment over his war stories reveals, we still believe somewhere that the TV (and the media at large) is supposed to tell us the truth. As we can see with the case of Tsarnaev’s middle finger, what we’re shown is often partial truth at best.

Meanwhile we’re becoming, I think, more vigorously aware of how the idea of ‘truth’ is constructed in documentary films. (See AO Scott’s thoughtful piece written last week for the New York Times.) Deepening these understandings, and helping others to expand their own perceptions of how onscreen ‘realties’ are (at least partially) manufactured could have real consequences for how our society functions and tells itself stories. Media literacy might be even more important if we’re all just characters in some weird, never-ending movie.