American Movie at 20: why this portrait of a working-class Wisconsin auteur endures

Chris Smith’s 1999 film followed low-budget filmmaker Mark Borchardt for a year of travails that somehow emerged as comedic. But did the laughs came from sympathy, exploitation or a complex collaboration between director and subject?

☞ How to create a documentary character
☞ The greatest documentary performances, from Nanook to Ocasio-Cortez 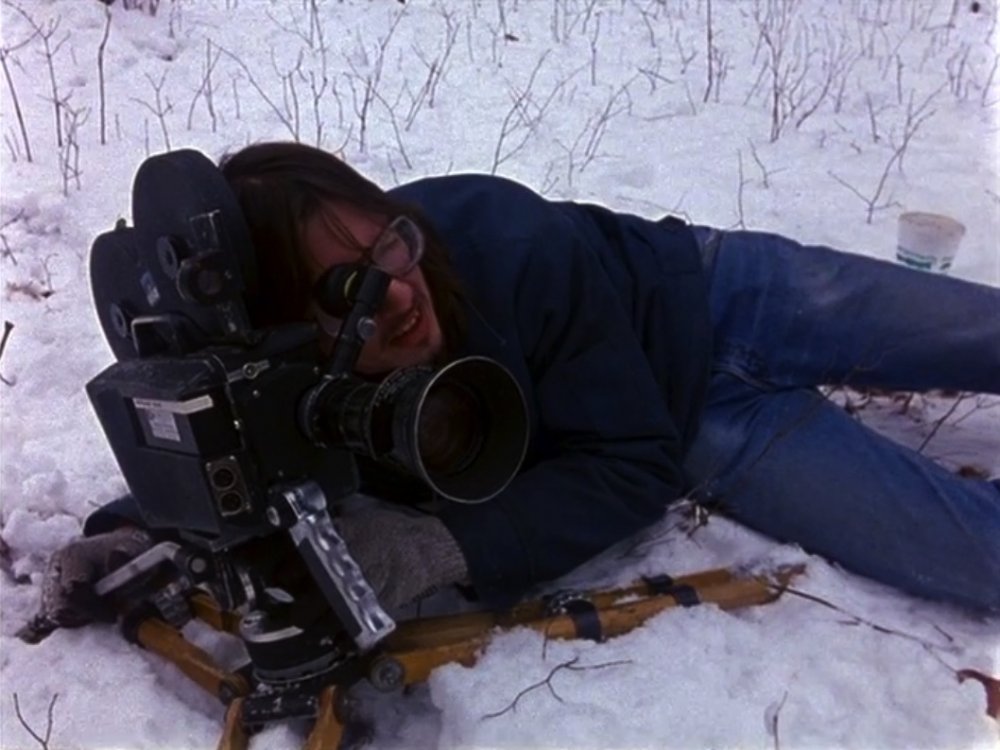 A teacher of mine in graduate school once scoffed at my admiration for Chris Smith’s American Movie (1999), claiming the film was less a documentary than a cross between blatant rip-off, unashamed exploitation and unacknowledged collaboration.

American Movie is currently available to stream on Amazon Prime.

To the professor’s first point, the film does share some traits with Joel DeMott’s underseen Demon Lover Diary (1980), and I can understand being a bit defensive about American Movie’s relative commercial success compared to its predecessor’s obscurity. An entertaining chronicle of a year in the life of Mark Borchardt, a low-budget Wisconsin film auteur struggling with working class realities, too many beers, too little support and a rarified mix of ambition and haplessness, Smith’s film may be one of the most influential documentaries ever made, while DeMott’s earlier, equally transfixing film has been essentially lost.

To the point about exploitation: yes, the film is exploitative, but all documentaries are to some degree. When the subject happens to be struggling with money or addiction problems, as Borchardt is throughout the film, things can get ugly. It does feel at times like we’re laughing at the characters and not with them, reminiscent of the early works of Errol Morris, who made his name skirting the line between mocking and exulting in his subjects in films such as Vernon, Florida (1981). In American Movie that sense is heightened by Borchardt’s desperate desire to get his film made and seen. Yet it’s his status as comedic documentary character that gets him ‘out there’ more than his own work ever could. 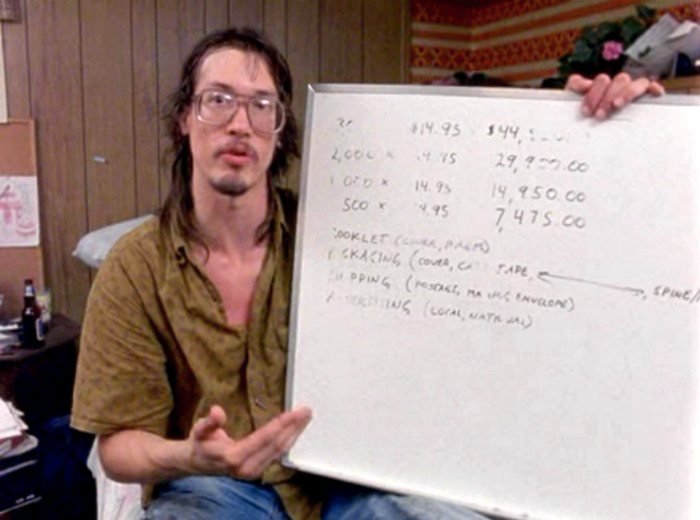 The final argument levied against the film was that it was hardly a documentary at all, but rather a kind of surreptitious work of fiction, full of unacknowledged collaborations and performances. This criticism stems from a fairly common platitude about what a documentary is supposed to be, and misses the point entirely. Borchardt is playing an exaggerated version of himself, of course, with the filmmakers complicit in this act. The daily struggle to produce art is turned into bits of comedy, but Smith’s attentive camera and precise, elliptical editing style creates empathy and pathos, giving Borchardt and his friends the platform he’s always coveted (and arguably deserved).

This tension between exploiting and venerating the characters animates the entire movie, as we observe him and his pals struggle to make their horror short Coven, as a step towards finally completing their epic 16mm film Northwestern. We watch Borchardt slam an actor’s head into a cabinet for an uncomfortable amount of takes (despite the door being improperly prepped) and fight to get garbled-mouth Uncle Bill to record his opening lines cleanly (“It’s alriiiiight, it’s okaaaay, there’s something to livvvve for, Jesus told me soooooo” for 31 glorious takes).

By the end of the film, the collaboration between filmmakers and subjects is elevated when American Movie and Coven compress into one. In front of a full audience, Borchardt screens his work, while Smith gives up his whole frame to a “Mark Borchardt film”, providing his starry-eyed subject with de facto distribution. The film even ends with an onscreen website address where you can buy a VHS copy of Coven.

Like many films before it, American Movie thoroughly embraced the multivalent nature of performance in documentary. What made Smith’s film so influential to a whole generation of filmmakers like myself, however, was that these complex aesthetic notions were being explored in such a funny, audience-friendly way. Viewers were treated to a veritable masterclass in exploiting the potential of documentary performance – while we giggled the whole time. 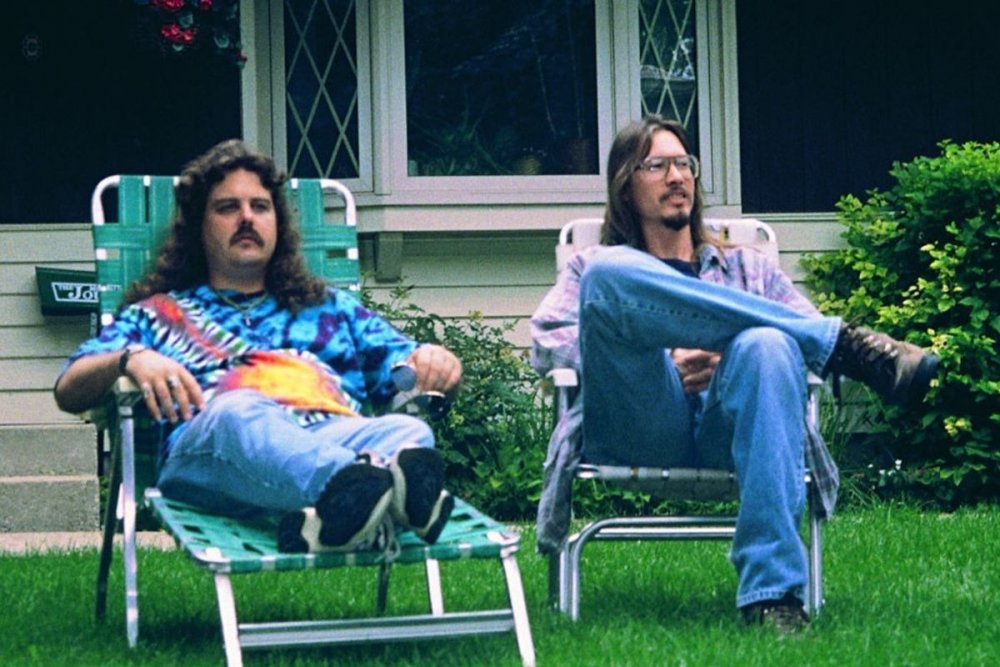 Borchardt’s onscreen persona involves class identity and class fantasy, a social enactment almost certainly instilled in him at birth, which has a lot to do with his growing up in the American Rust Belt and being raised by a working immigrant family. In several scenes, Borchardt recites lists of outstanding bills, one of which ends with his elation over receiving a credit card – a banal event that, for a man in Borchardt’s station, is anything but. Throughout the rest of the film, Borchardt displays his working class identity in the ways he speaks, dresses, wears his hair, smokes his cigarettes, drinks his beer, etc. He mindfully explores this class performance and comments on it, with his soaring ambition to become a respected filmmaker functioning as a kind of disrupter to what might be his typical, all-too-static social narrative.

His long-in-the-making epic Northwestern – his white whale, if you’d like – is dreamt up to be a deeper, more existential work than the horror fare he’s heretofore directed, a vision of America served up in black-and-white and on widescreen format. Northwestern is to be Borchardt’s “rust and decay” tone poem about drinking, manhood and the drama of the everyday, a kind of ‘life and times’ portrait of Midwest malaise. And in it, he wants naturally to play a heroic version of himself.

Understanding the way Borchardt performs this working-class role is an entryway to perceiving how he fits into the social structures built around him, which in turn offers a pathway to observing ways in which economic classes in America often function as preordained narratives. Recognising elements of artifice in his self-presentation helps expose the malleability of the part he plays and, conversely, the rigidity of class expectations. The camera’s presence heightens this performance and makes these complexities visible.

Other layers then emerge: Borchardt, the working-class actor is now ‘Mark’, working-class actor-director, who is playing himself in a movie (which is about making a movie about himself). This prismatic, subtly compounded truth reveals the plasticity of documentary performance. In American Movie, Smith and his collaborators (including Borchardt) took these layers of nonfiction performance and moulded them into the shape of a broad comedy. It’s a thrilling manoeuvre; perhaps never before had such an intricate film about working people been seen by so many.

Twenty years after American Movie, ideas about the inherently performative nature of documentary have become fairly well established and one can’t help but credit, at least in part, the surprising success of the film. Smith asks us to see Borchardt, the buoyant complexity of the life he’s lived and the social constructs he’s performing for the camera, and their partnership remains as affecting and funny as ever.

In documentary filmmaking, however, the story is always open-ended. At a 2016 screening of the film at the Museum of the Moving Image in New York, Borchardt was asked about his old sidekick Mike Schank, the loyal, sweet-natured, hilarious, preternaturally spacey, mullet-and-metal shirt-wearing Robin to his Batman.

Borchardt was dismissive and even a little irritated by the mention of his old friend, which hinted at a deeper dissatisfaction with being asked about aspects of his life from decades ago. Borchardt’s annoyance surprised us in the audience, but why should it have? The cinematic dreamer we all fell in love with (and undeniably snickered at) has long been known more as actor than director. Like all documentary subjects, his life has been frozen in time.

Borchardt doesn’t like to talk about the film now. (When I reached out for an interview about its 20th anniversary, he politely declined.) It’s clear that American Movie remains exactly as complex now as it was when it first came out. We should be inspired by its ambitious embrace of documentary performance, but we should also be wary. In 2017, Borchardt tweeted that he has begun to write Coven 2 and he confirmed to me he’s still working on the follow-up to his would-be cult classic.

Of course it makes sense that the film that inspired so many of us might leave a bad taste in Borchardt’s mouth. I remain inspired by American Movie, but I’m even more inspired by the man himself.

Related to American Movie at 20: why this portrait of a working-class Wisconsin auteur endures