David Tedeschi and Martin Scorsese’s tribute to the New York Review of Books, The 50 Year Argument, and Kevin Cameron’s attempt to follow Glasgow’s “little grey deity”, Alasdair Gray: A Life in Progress, both essay mind maps of wordsmiths against the tide. 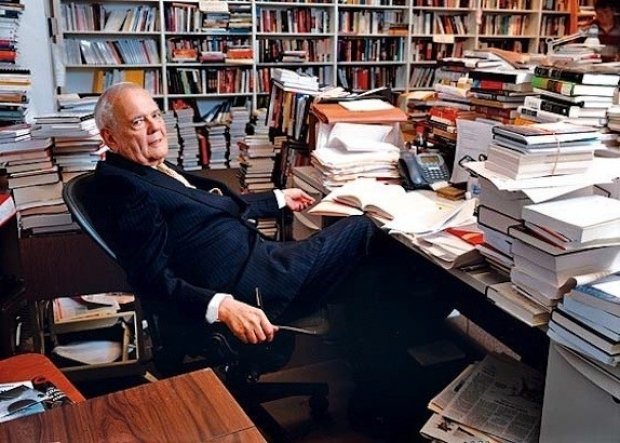 This year’s Sheffield Doc/Fest was bookended by two documentaries on the literary arts. While both explore the interface between art and political engagement, formally they could not be farther apart.

BBC Arena’s The 50 Year Argument is a celebration of the New York Review of Books, which last year turned 50. The bi-weekly was borne out of discussions between friends and co-founders Robert Silvers, Barbara Epstein and Elizabeth Hardwick, emanating from an article Hardwick wrote in Harper’s entitled The Decline of Book Reviewing. The article accused the book-review sections of America’s metropolitan papers (the New York Times, in particular) of publishing reviews that “‘thanked’… and excused” with “uniform equanimity.” Writing in 1959, calling them “listless” and “a mush of concession”, Hardwick warned of the bigger problem of their “gently, blandly, respectfully denying whatever vivacious interest there might be in books or in literary matters generally.”

In defence of this interest and out of concern for the culture of the literary periodical and the long-form prose it propagates, Martin Scorsese came on board the film as co-director – joining his collaborator David Tedeschi via Skype at the Saturday screening. But this joint effort is less interested in the books that have passed into Silvers’ hands within the last half-century than in the progressive, political pieces for which the magazine is famed, and in Silvers’ facility (effective across all content) for pairing mindfully independent writers to authors and current affairs that wouldn’t typically be met in print. 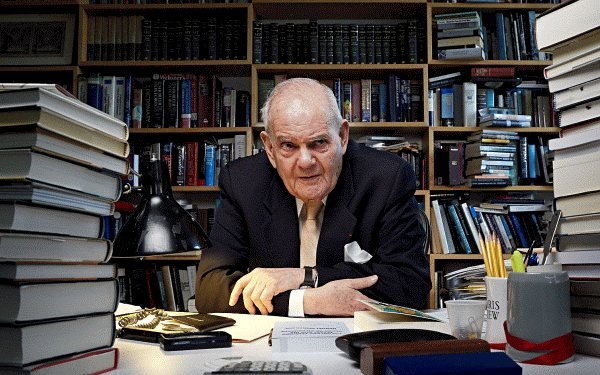 Eschewing linear chronology for a more intuitive, musical narrative, the film revisits mid-century political markers by a mapping of the minds that interpreted them: Darryl Pinckney on race and homosexuality; Michael Greenberg on Occupy Wall Street; Joan Didion on the complicity of the press in the wrongful conviction of four black males in the 1989 ‘wilding’ case; Timothy Garton Ash on Czechoslovakian dissident Václav Havel and the Velvet Revolution. Mixing record (archive footage) and recollection (direct-to-camera interview with the journal’s surviving contributors), the film’s form enacts Oliver Sacks’s thesis (an excerpt of which essay the film adopts for prologue) that editorial response and re-telling replenishes historical fact: “Frequently, the only truth is narrative truth… Memory is dialogic and arises […] from the intercourse of many minds.”

The 50 Year Argument is a documentary masterclass in lucidity and refinement, the filmmakers effecting order with simple, aesthetic measures – such as black-and-white studio stills to announce a new talking-head, and on-screen text to accompany audio narration of more complex or lyrical passages – which salt the effigy-like feel of the film as a whole. With additional photography by Albert Maysles, it’s a controlled and moving film that unloads like ubiquitous conversation, taking breath only with brief visitations to Bob Silvers’ tranquil office: a knoll of quiet, where his late and beloved co-editor Barbara Epstein is estimated to have overseen near 15,000 articles, and where the film leaves off its journey. 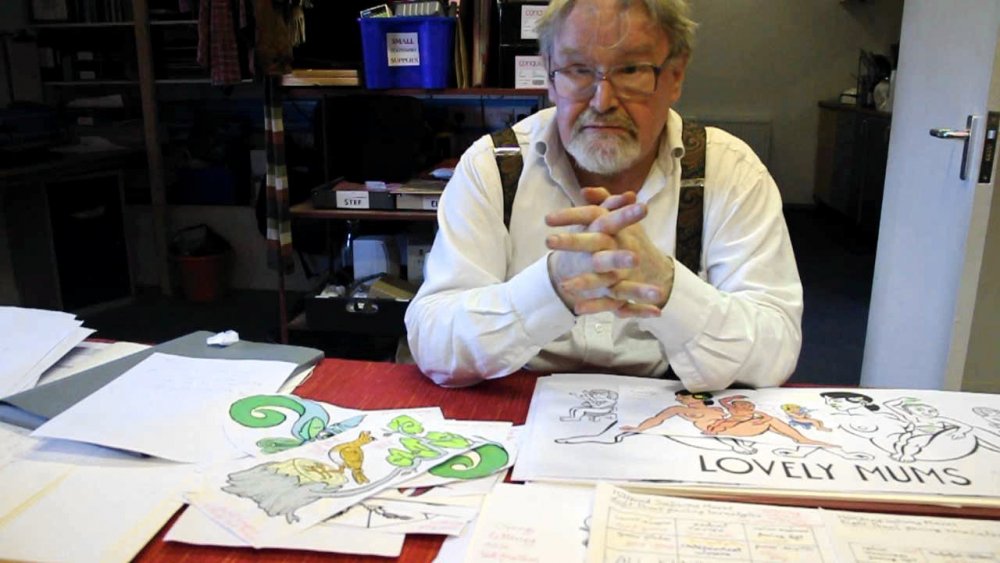 In stark contrast is Kevin Cameron’s Alasdair Gray: A Life in Progress, which played on the last day of the festival to an almost-empty auditorium. Filmed over 15 years, it follows Glasgow’s cherished mouthpiece, writer-artist-muralist Alasdair Gray – whose 1981 novel Lanark: A Life in Four Books he began writing at 18. Now in his 70s, he fills his time in overalls, designing and painting murals and restoring his earlier wall-works in locations across the city. Prized as much for his visionary art as his pro-independence, socialist politics, Gray (whom Will Self has called a “little grey deity”) is a man not to scale; so great and original a presence, he’s not easily contained.

Since the intricate, scenic workings of his ticker-tape mind do not always make it out intact, Cameron’s documentary is a rattled, embattled, uneven attempt at filming the artist’s interiority. Bizarrely, it’s effective: a sideways film, it moves on a sliding scale from the most recent footage of a 2012 radio-roundtable about the potential for Scottish home rule to the earliest, in 2000, which sees the wallpapering by redevelopers of Gray’s private-house mural of Jonah and the Whale, with all dates disordered in between.

In a sense, the film is itself a trompe l’oeil, expressive of Gray’s imagination – which, as he says, holding Harmsworth’s Encyclopedia, knows “no separation […] between the adventures of science and space… and the fantasies of Alice in Wonderland and Through the Looking Glass.” There’s unity in euphony – in the neighbourly relation of all things in the resourceful, imaginative mind. 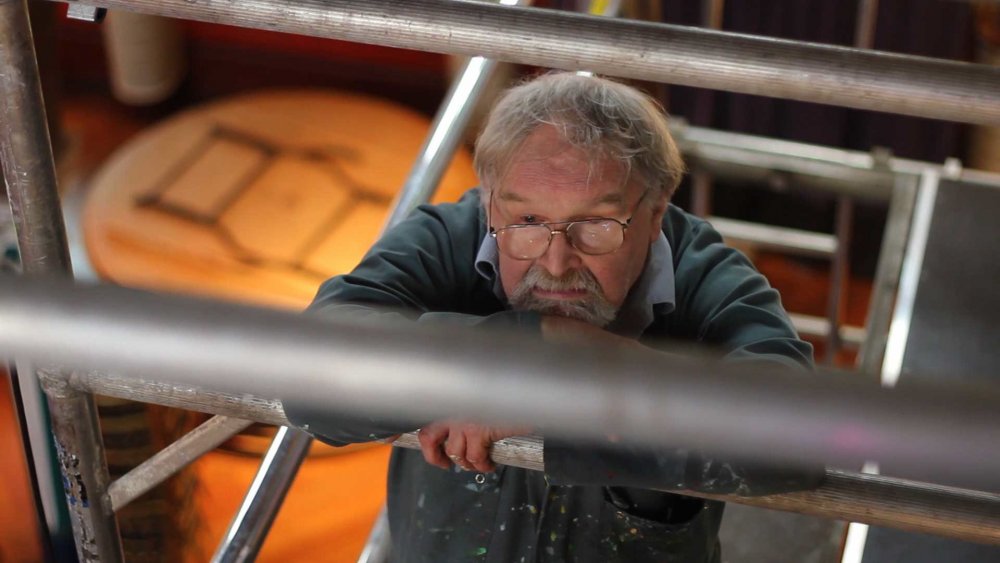 Gray is abashed before the camera, like he doesn’t believe in it – so Cameron’s camerawork is self-trivialising; has to be. The film’s anecdotal centrepiece, catching Gray off-guard “at a moment of crisis”, finds the painter in a muddle over a lost portfolio, containing two months’ work toward his Hillhead Underground mural, and misplaced after a heavy night of drinking. In this instant – albeit with no thought to framing, with scarce eye-contact and lowered head – Gray appears a little more accepting of the process of filmmaking, which he’s heard elsewhere to dismiss (“No doubt it would be extremely better without filming me at all; just having a sheet at a time with my voice over”). In fact, in this sole extended to-camera fragment, Gray’s aberrant appeal to the lens proves true measure of his worry, which his outward behaviour makes woollen with giggling and ebullience. His uneasy relationship to film becomes tablature for tacit emotion.

Gray’s surprising voice is the sure star of the film: ululating, undulating, ascending and descending, risen in song – a baritone, a bugle reveille, the wee squeak of storybook mice before sleep. At the film’s opening, the soundtrack samples Gray’s declarative voice, recognising that this is his instrument. Given the sacrificial art of Cameron’s specific task (filmmaker as faithful supplicant), the film might be alternatively titled His Master’s Voice – with Gray the gramophone.

Like The 50 Year Argument, Cameron’s film isn’t concerned with story as chronicle – but with the unruly, untidy, pedestrian individual: a work in progress.

In the (forthcoming) August 2014 issue of Sight & Sound

Nonfiction cinema is booming, and Sheffield Doc/Fest with it. But can the festival show us the cutting edge of the art, asks Nick Bradshaw?