The East End of the world as we know it? 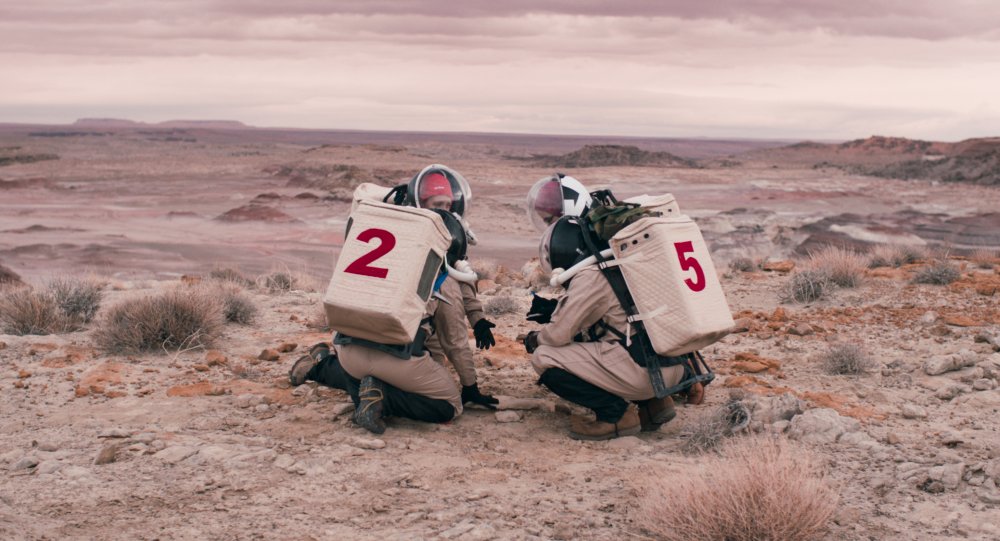 Climate change is fast approaching – may even already have passed – the tipping point where life as we know it can continue. The gulf between rich and poor has never been wider. The antibiotics which have this last century protected us from infection are fast losing their efficacy. Unrestrained conflict in Syria and Iraq, and lawlessness in parts of North Africa, have led to unprecedented numbers of refugees. In an overpopulated, under-resourced world whose biodiversity is ever shrinking, unsustainability has become a byword of human existence, and one way or another something’s got to give. Disaster hangs over these times, like a toxic emission which cannot be seen but whose impact is nonetheless building, threatening our status quo and our future well-being.

It might at first seem odd that such concerns should be addressed by a modest, parochial film event, but the East End Film Festival, originally founded in 2000 as a platform for filmmakers living and working in East London, has since expanded its outlook internationally so that, while it continues to act locally, it also thinks globally. In what’s no doubt a reflection of the precarious times in which we live, there is a notable preoccupation with matters apocalyptic, from different angles and on all manner of scales (social, economic, ecological, even cosmic) among the 33 feature films showcased in this year’s programme. Here are ten titles that take on this doom-laden theme.

Andrea Luka Zimmerman’s doc takes both a synchronic and diachronic view of the Haggerston Estate – in the East End borough of Hackney – where the director was herself a resident. Shot over seven years from 2008, it follows several of the estate’s short- and long-term occupants leading up to its demolition, while also tracing the area’s long, cyclical history of social exclusion and renewal. Built in the 1930s as an ‘improving’ utopian replacement for local slums, the estate was neglected by the council in the 1970s, and itself slated to be razed and redeveloped in the 1990s.

Like Zimmerman’s local art project I Am Here (which the film includes), Estate, A Reverie serves as a graffiti-like reminder of the individuals and personal histories, so easily overlooked, that are as important as the buildings that house them in making up a community. Haggerston’s last bricks came down in 2014, which is where Zimmerman’s documentary ends, on a note of both lament for a literally collapsed society, and hope for a new beginning. 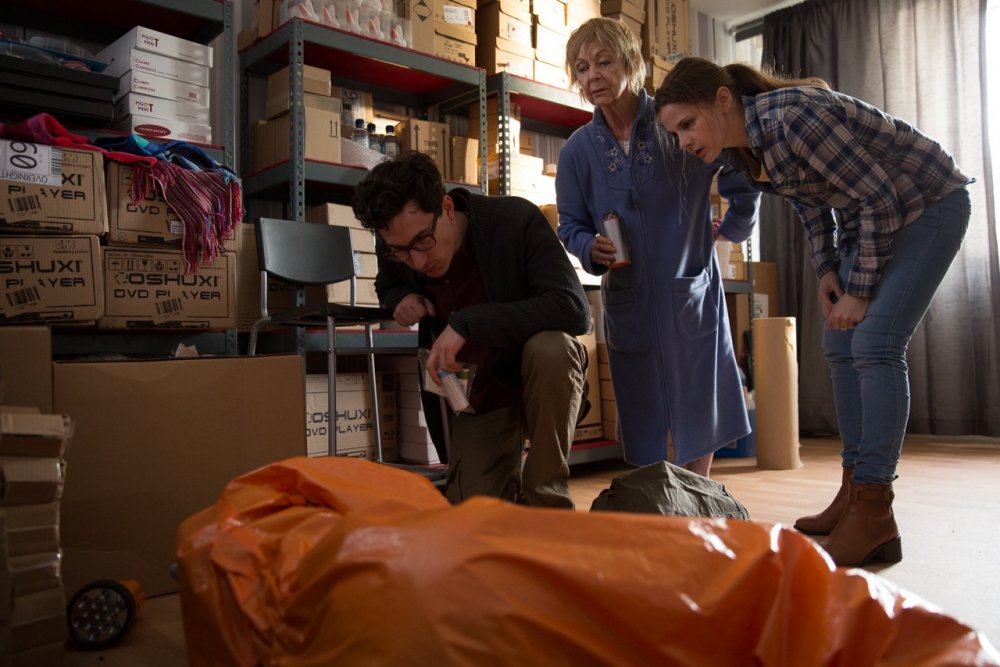 “30 years I’ve been here. Weren’t a shithole then. Homes for the future, they said.” The English tower-block estate at the centre of Neil Mcenery-West’s directorial debut, with its cross-section of multi-cultural, multi-generational residents who all share a sense of abandonment, is not dissimilar to the microcosm of English urban life seen in Estate, a Reverie – except that Mcenery-West shows this community locked in by Hazmat-suited soldiers tasked with containing a deadly viral outbreak.

What follows is a hellish vision of rapid social and moral breakdown as the estate’s inhabitants attack the authorities and themselves in their distrust, panic and desperation, and prove far more efficient than the fast-working disease (which barely figures in the film) at killing one another. It is like [REC] or The Mist (both 2007) but without the monsters, as a beleaguered society turns on itself and destroys its own hope. 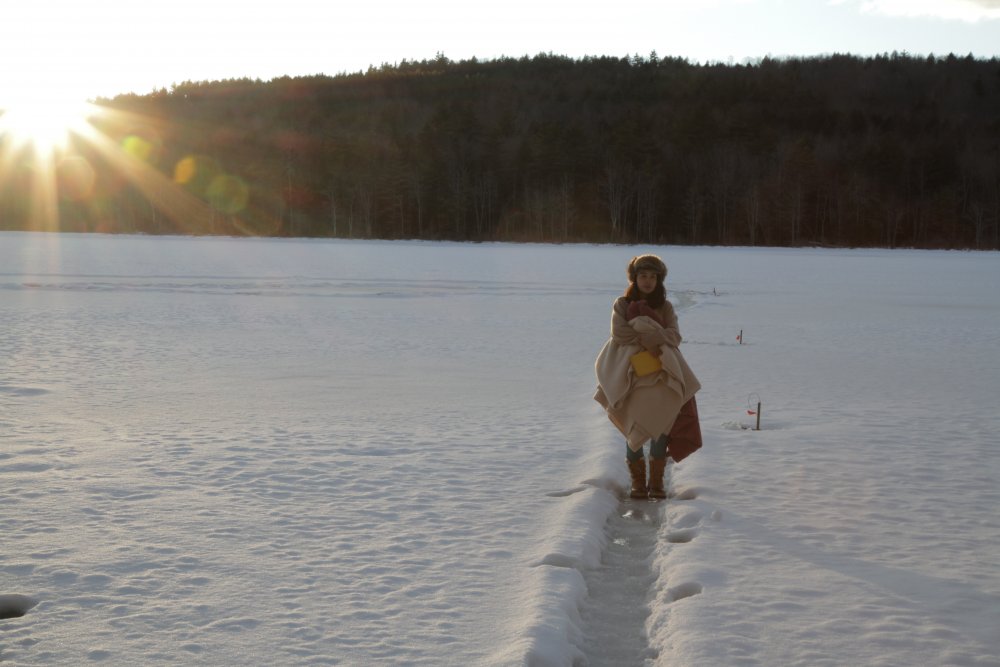 By contrast, Kristjan Thor’s more optimistic wilderness drama shows the persistence of humanity beyond its near extinction. After a virus not unlike the one in Containment has depopulated most of the world, 16-year-old Astraea (Nerea Duhart) and her older stepbrother are walking across a silent, empty America in the hope of finding lost family still alive and avoiding the “rapists or killers” – whom in fact they never encounter. Falling in with a similarly immune pair of cousins during the harsh Maine winter, they form something like a family together as they begin to reestablish the rules of civilisation.

Astraea is a coming-of-age film, with just a smattering of the supernatural, that bucks convention by daring to suggest that the connections between us will remain strong amidst global disaster, and that every winter – even a post-apocalyptic one – is followed by a new spring. Think of it as Thor’s thaw.

A very different kind of apocalypse is seen unfolding in Michael Beach Nichols and Christopher K. Walker’s documentary, lent special relevance and urgency by the recent racist mass shooting at the Emanuel African Methodist Episcopal Church in downtown Charleston, South Carolina. Leith is a tiny, ‘forgotten’ town in North Dakota, described by one commentator as a “B roll to The Walking Dead” and by a poster as a “village of the damned” – and when the white supremacist Craig Cobb moves in and begins buying up properties for his neo-Nazi friends, the hamlet’s small population finds itself being taken over and turned into a haven of hate.

Welcome to Leith demonstrates not only the insidious manner in which Cobb and co. operate on the very edge of legality, but also their toxic effect on a community which ends up crudely mirroring the methods of the enemy within. It is a matter of historical record that Cobb has been forced to move on – although he still owns the property – but he has left behind him a populace forever changed, fully armed and far less inclined to be welcoming in future. 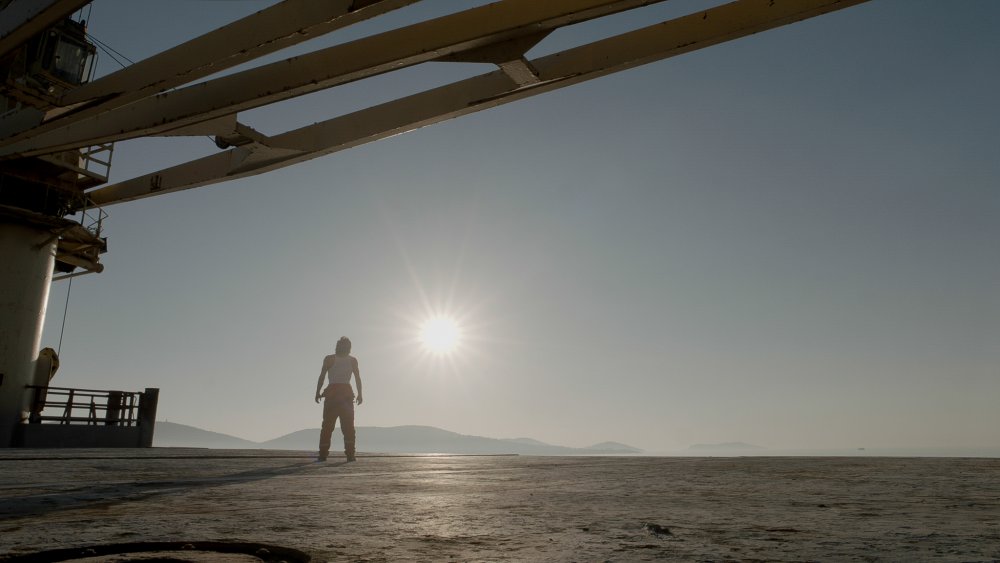 In Tolga Karaçelik’s fictive thriller, a cargo ship is left in lien off the Egyptian coast and manned by a multi-racial skeleton crew of six sailors desperate not to forfeit their pay. As the days turn to weeks and cabin fever sets in, the least stable and least able seaman manoeuvres himself to take power – and so this devilishly tense, increasingly hallucinatory thriller uses a vessel stalled at sea as a vivid allegory for a world on credit and in economic meltdown, with nobody truly responsible at the helm.

At its core this is a naturalistic presentation of men stuck unhappily in close quarters with each other, but it boasts a claustrophobic atmosphere more reminiscent of genre films like Alien or The Thing – and as its studied realism gradually gives way to hallucination and madness, the title (at first apparently a metaphor for the crew’s tenacity) gets realised in the most unexpected of ways (which it would be criminal to spoil). This is high-stakes, high-seas psychodrama, gripping to the bitter end. 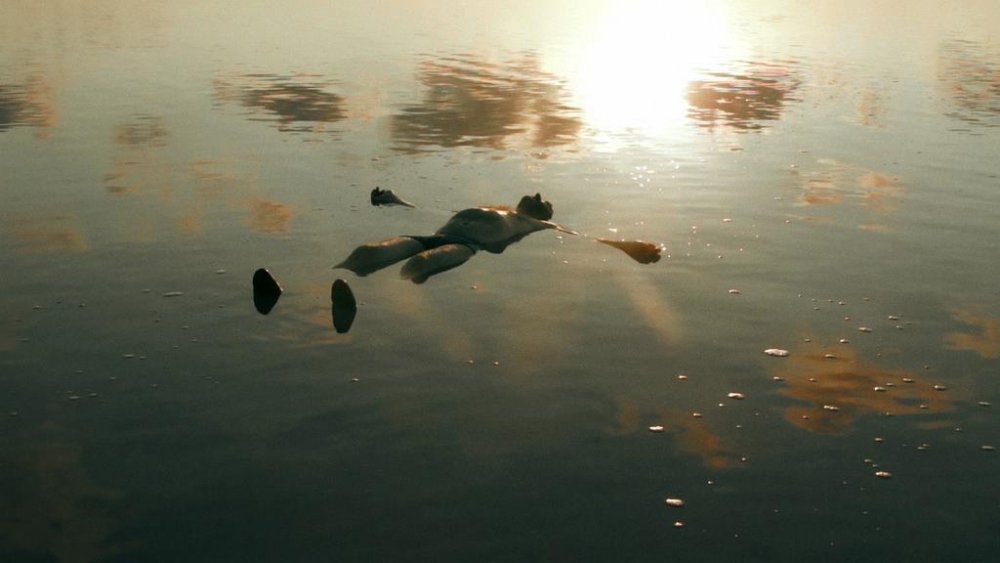 Also merging the realities of economic apocalypse with more abstract ideas is Adán Aliaga and David Valero’s lo-fi sci-fi, in which two down-sized security guards and an anorexic dancer decide to reset their lives via a makeshift machine of their own invention. It’s a tale of banal wish fulfilment in a Spain racked by unemployment crisis, where fantasy and the longing for change yield a parallel universe not so very different from the original.

Ambling if amiable enough in its low-key understatement, this one leaves its implications to catch up with the viewer in retrospect as our desires – like those of the three principals – for a better, more fulfilling scenario remain tantalisingly unsatisfied. 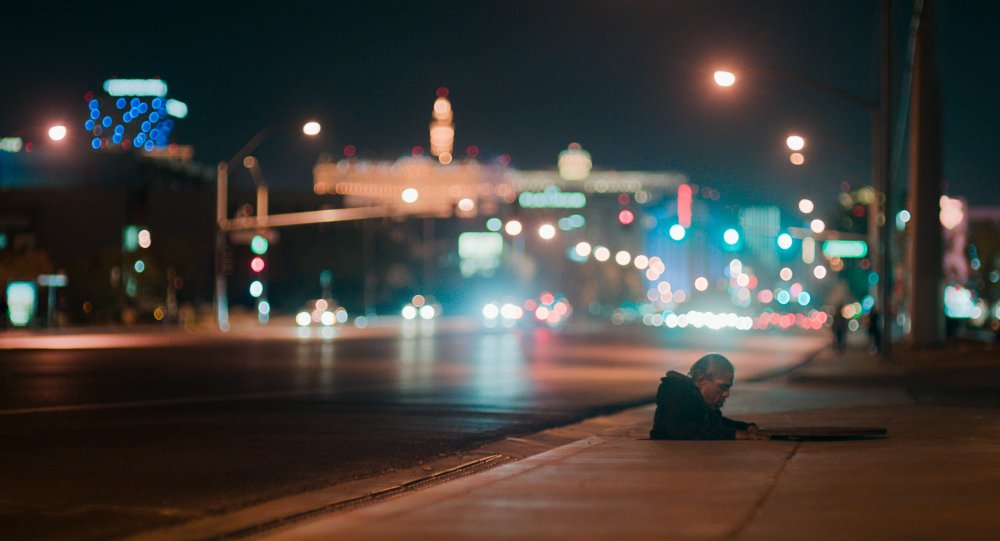 “What if we went into world war or the world came to an end? I know how to survive.” So says one of three people living rough in the storm drains beneath Las Vegas, scavenging food and furniture from above and gambling on good weather for their subterranean homes not to be washed away.

Meanwhile an ageing man lives alone in an abandoned military bunker in the Californian desert, drawn in both awe and horror to the ‘disaster’ of an over-salinated lake in which his own decline is reflected. And an Iraq War veteran in an astronaut’s suit spends her time in the wastelands of Utah, simulating a prolonged Mars mission while reflecting upon the ruins of her own family life and the absence of God.

Cross-cutting between these exiled existences, Nicolas Steiner’s Swiss documentary follows self-marginalised Americans living on the edge and looking out for the end. It is a beautifully poetic portrait of survival in extremis, even if at times the associative links forged between these disparate lives feel a bit contrived.

Conceptual artist Michael Madsen’s The Visit imagines the arrival on Earth of an alien visitor, then interviews real people – UN representatives, a theologian, an astrobiologist, a social psychologist, a ‘metalawyer’, a governmental PR and a military advisor – to reconstruct what the likely international response would be.

The result is a dreamy documentary, concerned as much with where humanity ends as where otherness begins – and, not unlike the cultural haul placed on the Voyager spacecraft as a record of who we are, Madsen’s film struggles to efface the more disharmonious, less friendly aspects of our own species. Here the sense of wonder and hope surrounding an extraterrestrial visit is tempered by the knowledge of our own consistent misbehaviour when invading and colonising the territories of others. 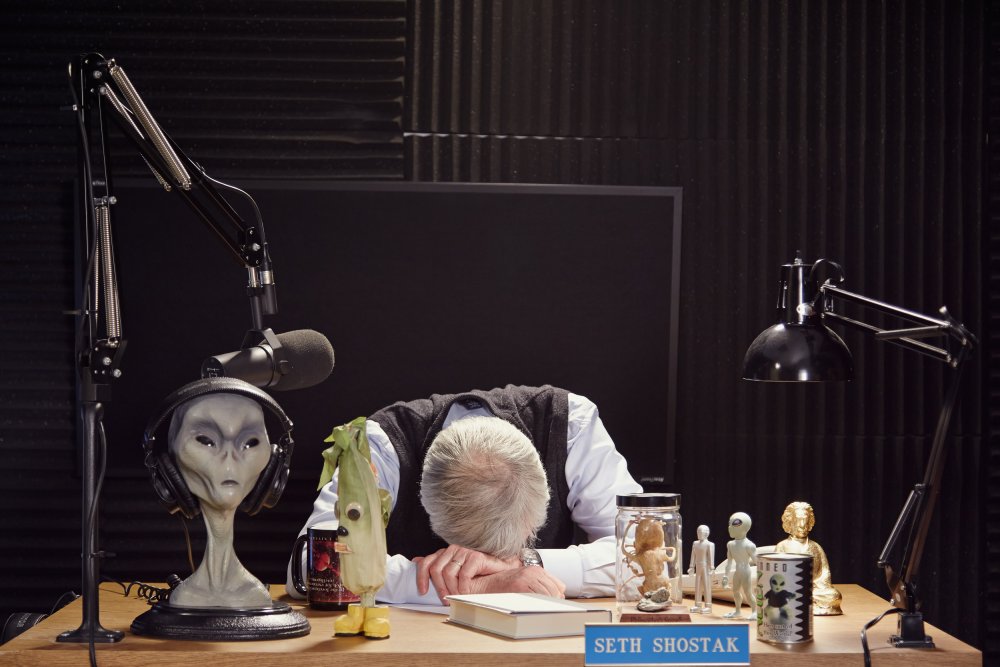 Nelly Ben Hayoun’s movie takes a superficially similar approach to The Visit, interviewing real personnel about the what-if scenario of an asteroid on a collision course with Earth. Armed, however, with a copy of Jean Baudrillard’s America, a disarmingly playful spirit and an arsenal of toys for use as props in absurd reenactments, Hayoun takes a far more postmodern approach to this very American apocalypse, suggesting that the nation’s geography, history and culture are inscribed with the narratives of disaster. Rarely has contemplating the obliteration of the US seemed so much fun. 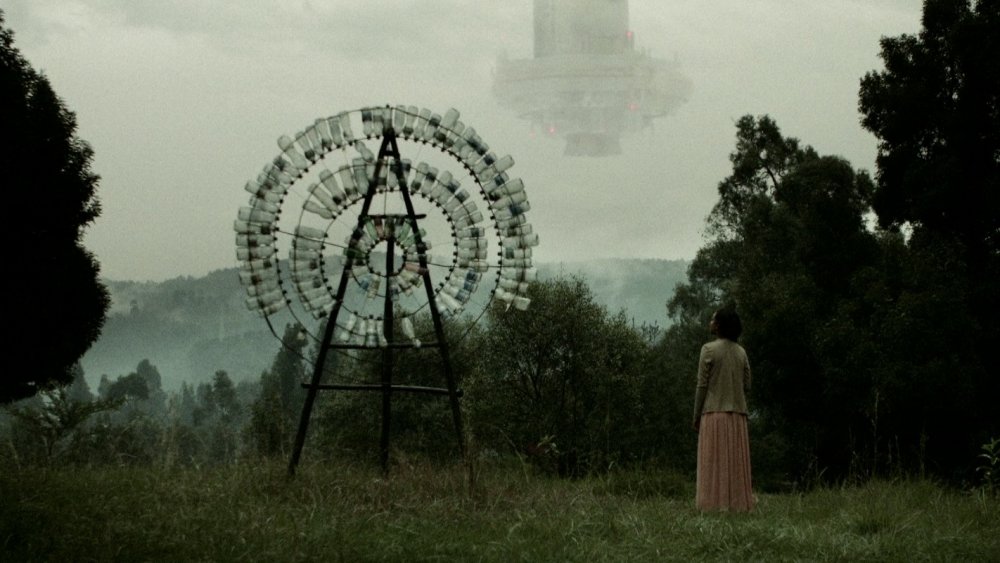 A different kind of postmodernism is in evidence in Miguel Lansó’s film, set in a post-apocalyptic Ethiopia whose mythology and theology have been built on the cultural detritus (and plastic toys) of the late twentieth-century West. Believing himself to be an alien-like Superman, diminutive, hunch-backed Candy (Daniel Tadesse) goes on a quest of self-discovery, while his pregnant lover Sayat (Selam Tesfayie) must contend with a black Santa Claus living, magical realist-style, beneath the abandoned bowling alley where they have settled.

Crumbs is an odd Afrofuturist odyssey that rebuilds the family of tomorrow from the discarded crumbs of today. It is a long way, both in time and space, from London’s East End – but like Estate, a Reverie, it shows a society both collapsed and possibly reemergent, and at this most eclectic of festivals it feels right at home.

Related to The East End of the world as we know it?