How to explore the truth in the age of fake news? Homegrown films premiering at Sheffield Doc/Fest 2019 showcased some novel approaches to nonfiction, from dance to collage. 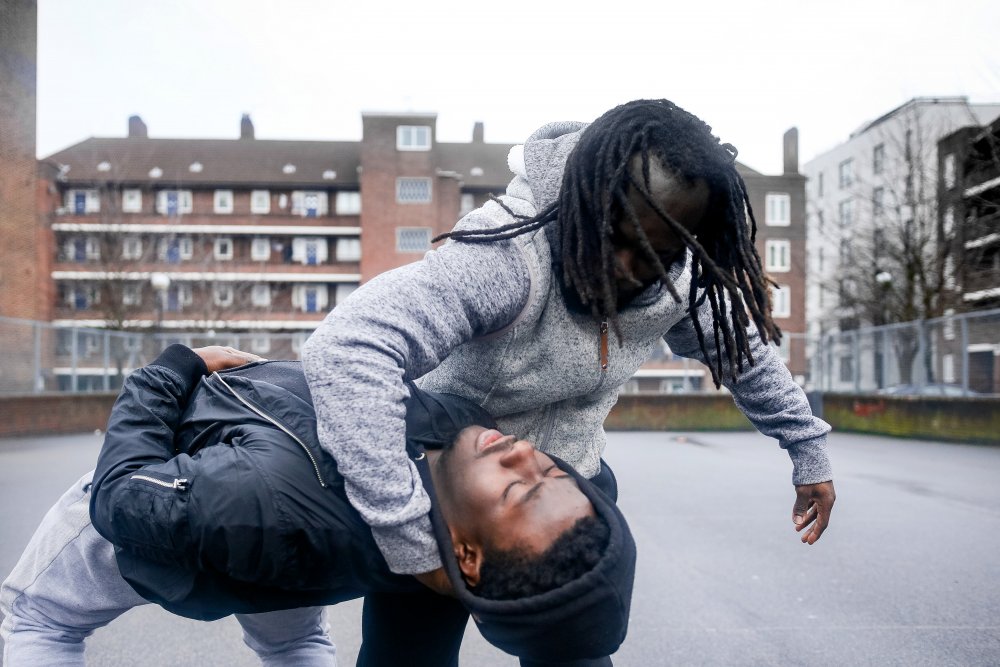 It’s hard not to feel like life in Britain makes less sense than it used to. The rapid advancement that has carried us from the mid-20th century to now has blurred our sense of self and redefined how we connect with each other. In the UK, as our dependence on technology and social media proliferates, our political and economic institutions have increasingly warped out of shape.

Cinema is sought out, in part, to make sense of the nonsense. The question is how to do that when audiences have supposedly “had enough of experts”, tired of facts and figures that seem to obfuscate what should be simple, instinctive discourse. Social, political and personal ideas might need to be offered differently to be entertained willingly.

This approach has made itself evident in British feature filmmaking of late. Shola Amoo blurred documentary, fiction, personal essay and dance piece to explore the effects of gentrification on Brixton in A Moving Image. Richard Billingham’s Ray & Liz explodes fractured anecdotes into vignettes that play out like art installations, using his parents’ story to tell that of any family on the breadline in 80s Britain. Tinge Krishnan and Ché Walker used the musical format to explore single motherhood and black identity in Been So Long.

Among the crop of British work premiering at this June’s Sheffield Doc/Fest, too, this mode of response appeared in full force. The festival presented a class of fledgling making full use of the tools at their disposal in order to refract the anxieties of today’s Britain into artistically-driven documentaries fuelled by feeling and instinct. 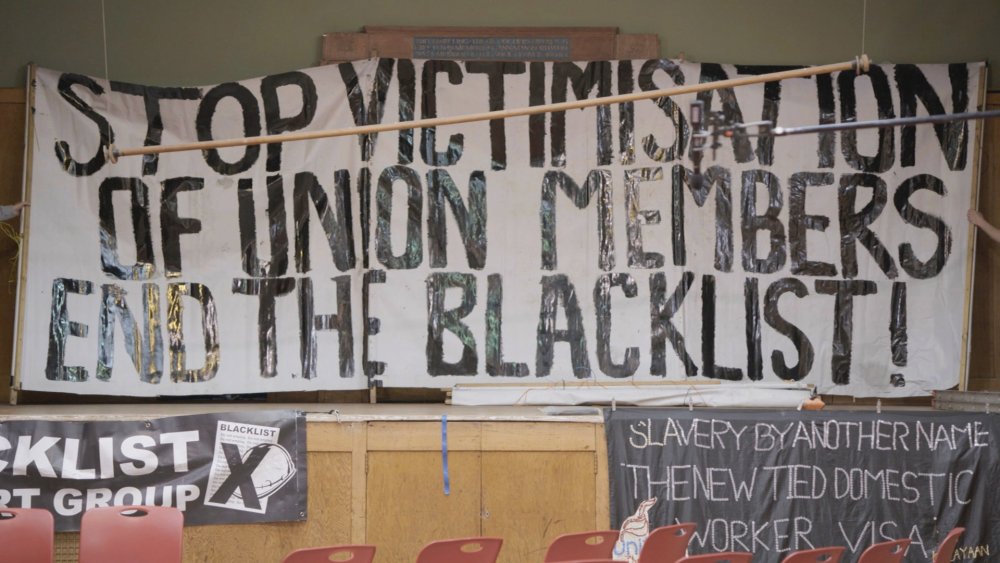 Lucy Parker’s feature-length debut Solidarity is arguably the most straightforward of the premiering docs, centring on a group of construction workers whose names were held for years on a blacklist maintained by the anti-union Consulting Operation, allowing companies to identify supposedly dissident or difficult workers due to their involvement in leftwing campaigning and industrial action. Parker deals in her film with the concerns of traditional workers increasingly overwhelmed by capitalist monoliths who suppress workers’ rights in order to cut costs.

The most straightforward segments of Solidarity include archive footage from public enquiries of Consulting Operation representatives squirming under public interrogation, and heartfelt interviews with the workers affected by blacklisting. But Parker, an artist as much as a filmmaker, weaves some more offbeat elements into the film. One thread sees a group of law students take on characters within a fictionalised version of upcoming or unconfirmed hearings on the case. Closer to drama school than law academia, the players workshop eventualities and play roles not their own.

This feeds outwards into the events of the film as Parker engages workers and union activists in their own plays, including a mock public enquiry to prepare campaigners for the stand. She suggests new ways to tackle big business, workshopping a better future into shape through collaboration and improvisation. It allows a group of individuals grasping in the dark to feel around together for a new direction and unify into a coherent resistance.

This is taken further in Lanre Malaolu’s short film The Circle, which centres on two brothers in Hackney, interrogating their concerns about masculinity and racism. Malaolu takes open, revealing interviews with David and Sanchez and plays them against dance pieces choreographed by Malaolu himself to express the brothers’ emotions through movement. 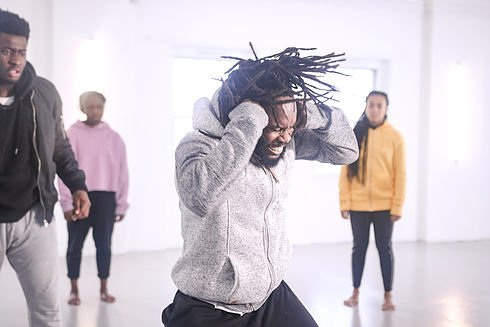 Topics covered by the two men include exclusion and racial profiling, their relationship with their mother, anxiety and depression. When their words fall short, it is the expressive motions of the dancers that articulate Malaolu’s intent and allow the specifics of their story to transcend into pure feeling – a neat, conceptual method for communicating ideas from black, working-class culture to a diverse but empathetic audience.

Similarly, Stroma Cairns directs twins Lewis and Connor Tompkins in If You Knew, a film about their tumultuous relationship, as well as how they interact with the world as profoundly deaf people. Cairns places Lewis and Connor’s contributions in subtitles overlaid on images of their day together in Canvey Island – their first encounter since one broke the other’s nose in a fight months previously.

If You Knew trailer

Cairns adopts a serene, collage-like approach, reflecting the brothers’ thoughts through image and sound rather than incident or testimony. Noise drops in and out intermittently and mood is allowed to fluctuate freely as Lewis and Connor quietly wrestle with their frustrations with each other and with a world that at times ignores or mocks them. Fragments of peace and joy seep in from their seaside frolics, allowing Cairns to build a more detailed picture through suggestion and nuance in five minutes than straightforward testimony alone could. 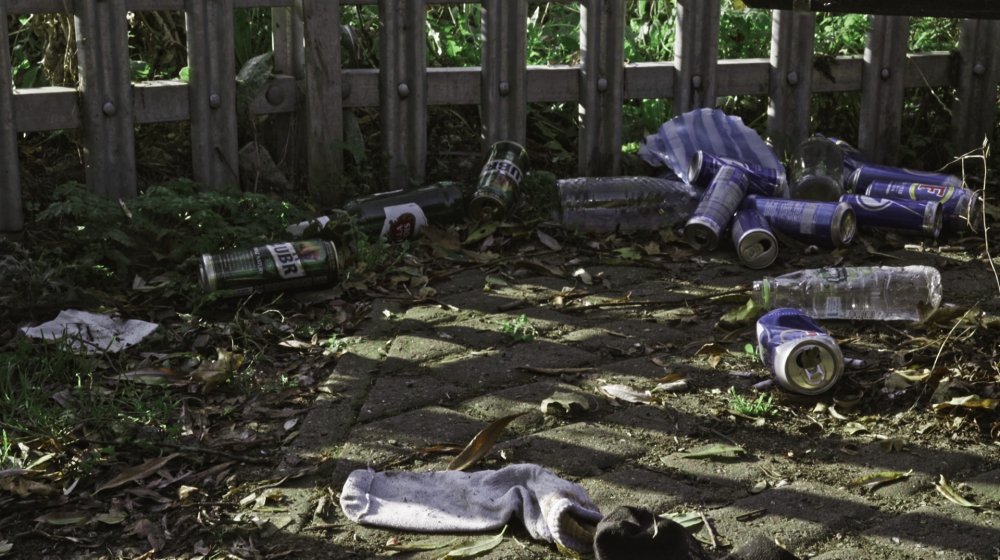 Chris Penty uses an essay-like form to similar effect as his short Canal deals with both mental health and the country’s dying industries as he traces his old commute along the mostly derelict Grand Union Canal in London. His sullen voice relates images of litter and abandoned buildings on his route to incidents in his life and the feelings of depression and anxiety that afflicted his life at the time, favouring mood over narrative in its bid to evoke empathy.

In her short Disconnected, Alice Aedy follows a similar bricolage-style strategy in her efforts to portray today’s social media landscape as a ‘sci-fi dystopia’. Phoneline confessions from isolated and confused young people are intercut with dramatised depictions of their words drenched in moody neon light and deep black – the effect is again more of a unified whole than a collection of separate anecdotes, which Aedy chooses not to attribute to specific individuals.

Anxiety for the present ripples forward into curiosity about the future in the festival’s final premiere – Myles Painter’s Sunrise with Sea Monsters, which intermingles 16mm-shot images of the director’s hard drive in landscapes across Britain with fragments of interviews with philosophers, scientists and technologists whose preoccupations centre around the preservation of human memory given the inherent fragility of our tendency to keep digital rather than physical records.

Sunrise is perhaps the most obtuse of the crop and is likely to frustrate in its seeming directionlessness, and its choice of aesthetics over coherence, but Painter’s work is still of a piece with the efforts of these other British newcomers at Doc/Fest 2019. Confronted with the weight of conveying very imminent and potentially complicated ideas, he choses to repackage them in artistry, emphasising film form.

These are encouraging signs. The country’s nonfiction filmmakers have answered the broader public confusion with ingenuity, subtly reengineering the documentary and hopefully continuing to push us forward with clarity and knowledge.