Where is the Django Unchained auteur taking his talent? 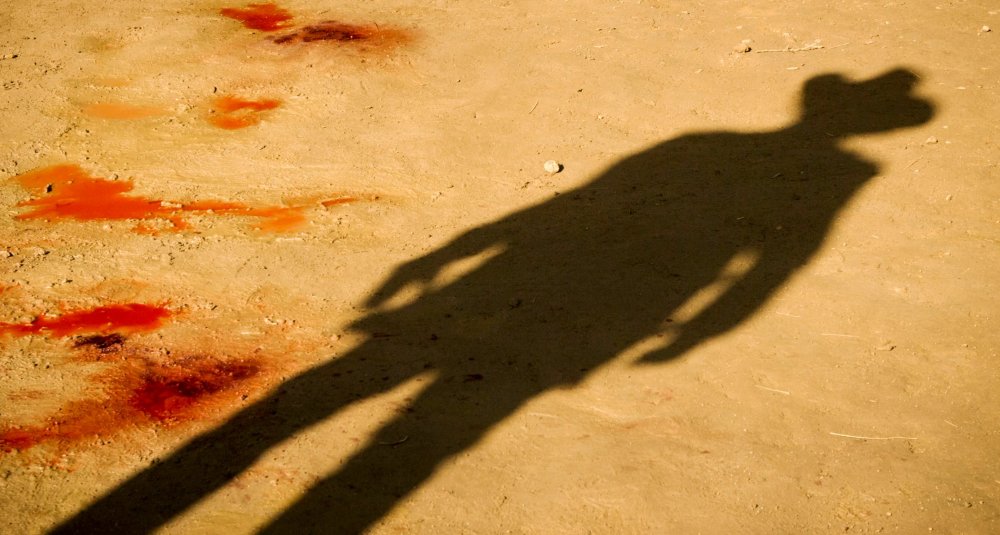 During a screening last Christmas of Quentin Tarantino’s extremely popular new film Django Unchained I had the disorienting experience of sitting in an American cinema packed with people cheering wildly as a man ruthlessly slaughtered dozens of people, just two weeks after a man in real-life America ruthlessly slaughtered 20 children. Tarantino would probably bristle at the connection, just as he did during a radio interview that brought up the Sandy Hook massacre. Audibly annoyed, he considered it “disrespectful to the memory of the victims” to relate their tragedy to his movie. “Movie violence is not the same as real violence,” he asserted, while going on to say that the one thing that truly disturbs him in films is violence inflicted on real animals. “I don’t think there’s a place in a movie for real death.”

Real or not, violent death has figured prominently throughout Tarantino’s filmography, as seen in this series of infographics that account for every single countable ‘live’ killing in his films. (I excluded moments merely showing dead bodies.) I compiled these statistics in the course of producing a video essay on Tarantino’s handling of movie deaths, a work S&S deemed too gruelling to publish. That video will be released elsewhere at a later date; in the meantime, it’s worth reflecting on this most disturbing aspect of Tarantino’s films within the safe domain of numbers and data, to extract what story they might tell.

In Tarantino’s world, every death is violent, and almost always at the hands of another (the only quasi-exceptions are three suicide-killings in Inglourious Basterds). No other director has enacted murder so prolifically, and yes, so imaginatively, drawing on dozens of homicidal reference points from other films, while pushing himself to top them. Outside the context of cinema, his visions could be seen as psychotic; within cinema, they explore the medium’s most visceral sensations not just with an unnerving brilliance, but an intense conviction that approaches a perverse pathos: a man’s fatal obsessions laid bare.

I scrutinised the frames of all of Tarantino’s films to get as accurate a count as possible, but I also referenced two websites, Movie Body Counts and All Outta Bubble Gum, both of which have tabulated kill counts for most of Tarantino’s movies. What does it mean that such websites exist, devoted to counting on-screen deaths? What can we make of such a morbid fascination with killing in the movies? 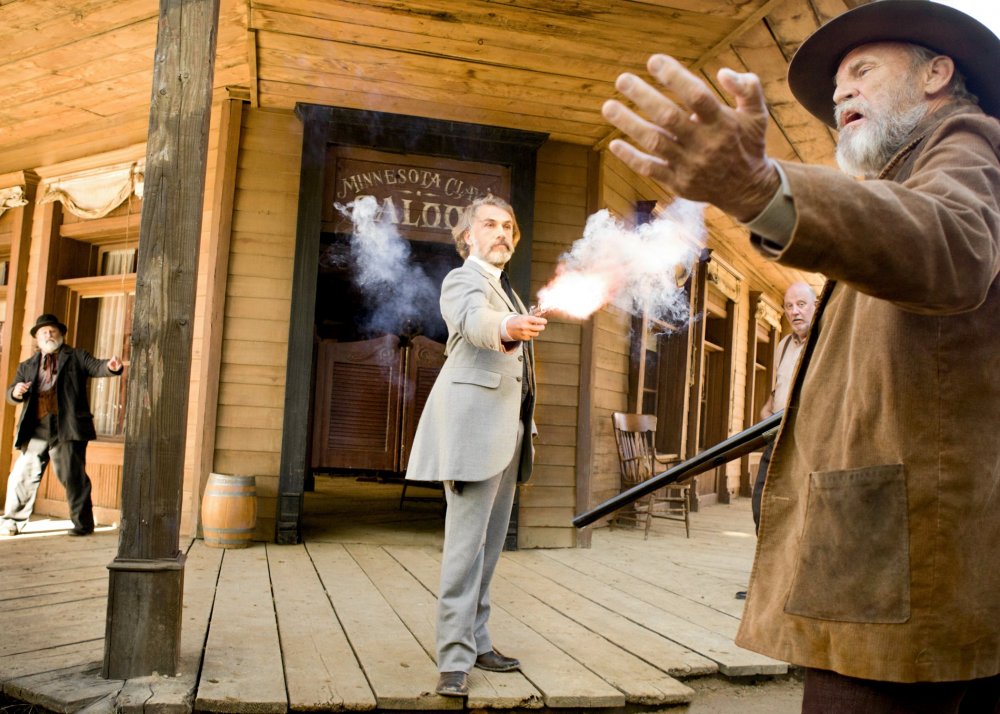 I’m surprised that in the age of viral fan videos, the video I produced hasn’t already been made by anyone from the legion of Tarantino fanboys who delight in these transgressive visions of bloodletting. My undertaking of this project was unintentional; I planned to explore the notion of Tarantino as a radical social progressive, who envisions women and minorities empowered through their appropriation of violence. But watching Django Unchained left me with a contrary conclusion: murderous retribution, however it wishes to justify itself, can never be the great equaliser, but is the eternal dis-equaliser, perpetuating more of itself. It’s that endless progression of violence and killing that I see running throughout Tarantino’s films with a consistency bordering on compulsion.

At the same time, his fixation has undergone a range of variations over the course of his career. A film-by-film statistical compilation reveals certain tendencies and patterns. Male victims greatly outpace females, with the one exception being Death Proof, Tarantino’s feature-length exploration of his woman fetish as objects of sex, death and self-agency, each aspect alluring and threatening in equal measure. People are overwhelmingly killed indoors; outdoor deaths don’t proliferate until his last two films. Until his period work in Inglorious Basterds and Django Unchained, more people are killed in cars than outdoors (with Death Proof amounting to an apotheosis of the automotive death motif). Do Tarantino’s fatal fantasies correlate to a sense of spatial containment?

There’s also a sharp contrast to be drawn between films with prodigious death counts in the dozens if not hundreds (Kill Bill Vol. 1, Inglourious Basterds and Django Unchained) and the other films, where deaths barely reach double digits. In the latter films there’s a much more individuated and meaningful quality to each killing: almost every character in these films has a name, a personal story arc and a strong sense of purpose to their death in advancing the film’s dramatic or thematic development.

The supreme example of this is Jackie Brown, in which each of the film’s four deaths sends shockwaves rippling across the film’s unassuming Los Angeles landscape. These thoroughly un-titillating killings have a sobering quality, depicted as abrupt yet matter-of-fact interruptions to lives that resemble ours. And unlike any of the other films, fantasy hardly figures in the equation. The unadorned ordinariness of these murders, in which the bodies simply disappear from the screen after being shot, allowing no lingering close-ups on the corpse, convey a chilling sense of death’s indifference to us, a sensation that hits almost too close to home.

What then to make of Tarantino’s follow-up, Kill Bill Vol. 1, perhaps his most indulgent and gratuitous extended killing spree (with the possible exception of Django Unchained)? On the one hand, the display of creativity is impressive: Tarantino exercises his murderous impulses to the fullest, employing an array of methods (guns, swords, a mouth, a door) and genres (blaxploitation, yakuza, anime). But the infamous House of Blue Leaves sequence, where Uma Thurman slices her way through dozens of nameless members of the Japanese Crazy 88 gang, is one of the lowest points of his career, a numbing pornography of relentless violence that suggests a gang bang in reverse. Or is this overkill Tarantino’s intention: he indulges our repressed bloodlust to the point that it purposefully skewers the boundary between spectatorial pleasure and punishment?

Were that to be true, I’d still object to the sequence’s imprecision: it’s the first time it becomes impossible to get an accurate death count in Tarantino’s films (some of the actors playing the Crazy 88 gang are killed multiple times in the sequence). There’s a similar orgiastic overkill in the explosive climax of Inglorious Basterds, set in Madame Mimieux’s Cinema, the current record-holder as Tarantino’s deadliest location. (I estimate 377 deaths. How? In the film it is mentioned it holds 350 people. I deducted those who left the theater, added those who were not guests [ie workers, guards], and added the 15 soldiers who are killed in the movie that is screened, following the logic that a movie death is a movie death.) 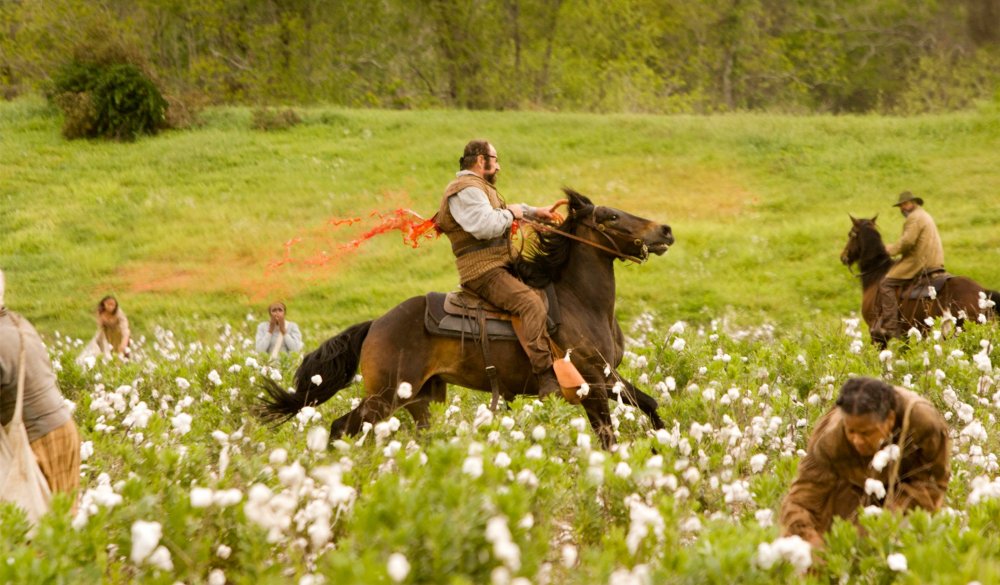 But just as indiscriminate is the killing of white southerners in Django, the majority of whom lack names. Naming is a telling signifier in determining how much respect Tarantino affords a character. In this film, most of the white victims amount to anonymous, slack-jawed, hee-hawing hicks, walking, talking blood capsules from whom Tarantino spurts red fluid with ejaculatory glee. How ironic that in a film that champions the abolition of slavery (and thus presumably the virtue of equality among all people), Tarantino depicts whites as sub-human fodder for murderous sport.

Again, the irony of Tarantino’s violence might be intended, here as a retributive answer to the film’s scenes of cruel black mandingo fighting depicted in excruciating detail. Still, one wonders about the implications of assigning entire groups of people – white southerners, Nazis and Japanese yakuza – to cinematic deaths without honour or humanity: meat for a cinematic bloodlust that’s barely justified by a convenient sense of moral justice.

Tarantino’s movies spill over with moments that conflate justice and injustice in the enactment of violence. To what extent is this moral equivocation provocative; to what extent is it primitive? The one thing I will assert – emphatically – is that these deaths are all real, and precisely for the reason Tarantino refutes their reality. To deny the real power of these deaths is to deny the living power of cinema.