Independent figures published today by the BFI show that in 2015 UK independent films held their own in a record year for the UK box office.

Independent figures published today by the BFI show that in 2015 UK independent films held their own in a record year for the UK box office, with independent films and highly anticipated blockbuster franchises, including UK-made Star Wars: The Force Awakens and SPECTRE, pulling in record cinema audiences, and UK film production remaining strong throughout the year, with UK High End TV production showing significant growth.

“Britain’s creative industries contribute a record breaking £84.1 billion a year to our economy, and I’m delighted independent films made in this country have maintained their impressive track record in what was a blockbuster year for the UK box office. We have some of the best studios, actors, crews, locations and facilities in the industry, and combined with the Government’s film tax relief incentives, the UK is the best place in the world to make film.”

“With spend from film production over £1.4 billion, audiences flocking to cinemas and UK box office topping £1.2 billion for the first time, today’s numbers show a golden age of British film continuing – and underlines film’s important contribution to the UK economy. It’s significant that a wide range of fantastic British independent films won the hearts and minds of audiences in a hugely competitive year, but it’s clear that the market is still tough for the makers and distributors of independent and specialised films – something the BFI is seeking to address through its Film Forever strategy.”

Independent home-grown productions were embraced by UK audiences in 2015, with a wide range of titles achieving a market share at the UK box office of 11% – the third highest since records began. Previously, a strong market share for UK independents has often been driven by one or two key titles, but in 2015 a wide range of films each performed well and appealed to different audience groups – eight independent titles took over £5 million in 2015.

These were led by Legend, starring Tom Hardy as both Kray twins, which was the year’s highest grossing UK independent with £18.4 million. Second was the sequel The Second Best Exotic Marigold Hotel, which appealed to older audiences, and took £16 million. Aardman’s Oscar-nominated family film Shaun the Sheep Movie took £14 million, The Lady in the Van starring Dame Maggie Smith took £12 million, and the agenda-setting, female-led Suffragette took almost £10 million (with The Lady in the Van and Suffragette both continuing to play to cinema audiences in 2016). Asif Kapadia’s Oscar-nominated documentary Amy, released in 2015, became the second highest grossing non-concert documentary of all time at the UK box office, taking almost £3.8 million.

The solid result for UK independents in 2015 is particularly significant given the stellar performance of studio blockbusters, with hotly anticipated franchise titles fuelling a record year for the UK box office overall. Total ticket sales were worth £1,240 million (up 17% on 2014’s £1,058 million) with admissions topping 171.9 million (up 9% from 2014’s 157.5 million). The year’s highest grossing film was Star Wars: The Force Awakens with takings of £114 million, released in December and still packing out cinemas in 2016. The latest outing for James Bond, SPECTRE was the second highest grossing film of the year, released late October, taking £95 million in 2015 and continuing to draw crowds in 2016. Jurassic World was 2015’s third highest grossing film, taking over £64 million, and in fourth place was the latest in the Avengers series, The Avengers: Age of Ultron, which took over £48 million. 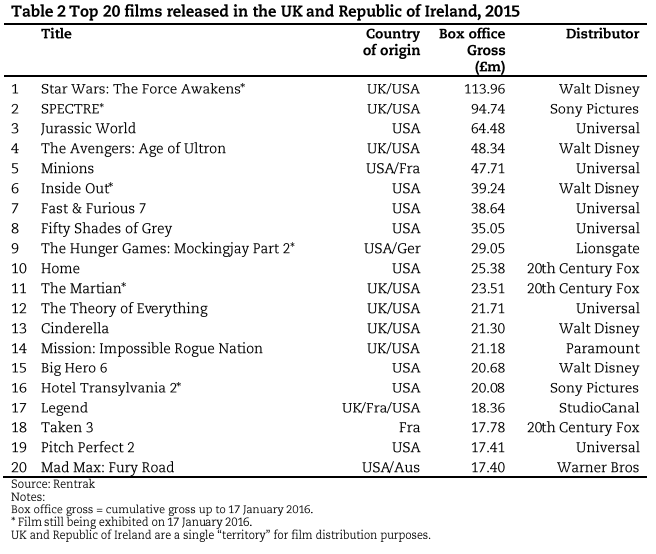 Top 20 films released in the UK and Republic of Ireland, 2015 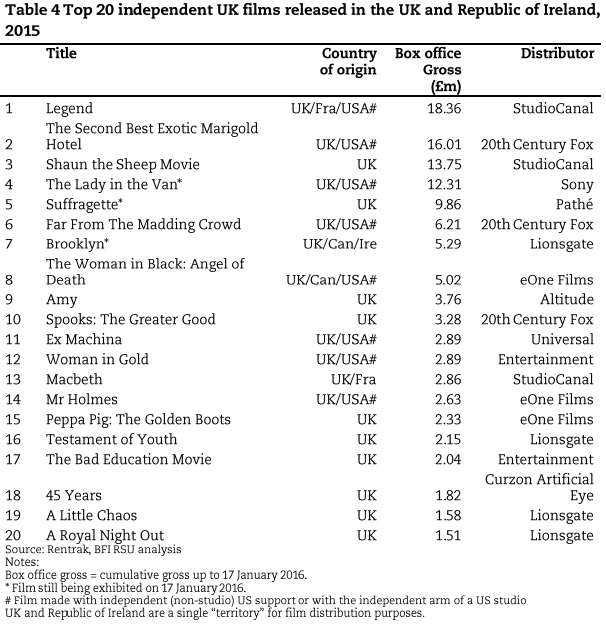 Top 20 independent UK films released in the UK and Republic of Ireland, 2015

The year saw continued strength in the UK’s production sector, with the total spend on film production in the UK topping £1.41 billion – the second highest figure since these statistics were first recorded 20 years ago and only a slight decrease of 6% on 2014’s record-breaking total (£1.49 billion). The strength of UK film production is testament to the continuing appeal of UK studios, facilities, locations, crews and the supportive fiscal environment created by the UK film tax relief.

International films attracted to the UK in 2015 by the creativity and expertise of the UK’s crews and world-class production facilities, the UK film tax relief and the service provided by the British Film Commission, helped to generate a spend of £1.18 billion from 47 inward investment films. These included Disney’s Rogue One: A Star Wars Story, 20th Century Fox’s Assassin’s Creed, Warner Bros’ Fantastic Beasts and Where to Find Them and Universal’s The Huntsman. Major international films making the UK their production base bring investment, create jobs, and contribute to the UK economy, with film production supported by the UK film tax relief generating almost £12.50 for the UK economy for every £1 spent in relief.

There were 124 domestic UK films made in the UK in 2015, between them spending £198 million – a slight dip of 7% on 2014’s total of £212 million. Independently produced domestic titles in 2015 included The Girl With All the Gifts (dir. Colm McCarthy), Viceroy’s House (dir. Gurinder Chadha), A United Kingdom (dir. Amma Asante), Notes on Blindness (writer/directors Peter Middleton and James Spinney) which has just premiered to great acclaim at the Sundance Film Festival, and Whisky Galore (dir. Gillies MacKinnon).

Owing to the lower budget nature of many independent UK domestic titles, which offer creative freedom to exciting UK filmmakers, there is often a time-lag in data collection so the total number of films and UK production spend will likely be revised upwards as more information is received. The January 2014 statistics release recorded 154 domestic UK titles; this figure rose to 224 as more data were received – a trend likely to be repeated this year.

There was significant growth in spend from High End Television production in the UK in 2015, with 82 television programmes driving a UK spend of £759 million – up 20% from £633 million in 2014. The growth of the sector is testament to the UK’s outstanding crews, locations, facilities and the government’s tax relief for high end television programmes and a range of titles were shot across the UK in 2015. These include Games of Thrones 6 (HBO), Galavant 2 (ABC Studios), Outlander Season 2 (Sony Pictures Television/Starz/Left Bank), The Night Manager (AMC/BBC/Ink Factory) and The B*stard Executioner (FX/Fox 21/Imagine Entertainment).

At the time of reporting, at least 18 animation programmes were produced in the UK in 2015 with a spend of £29 million. Of these, eight were domestic UK productions. However, there is a significant time lag in collecting animation data and these numbers are almost certain to increase as more information becomes available.