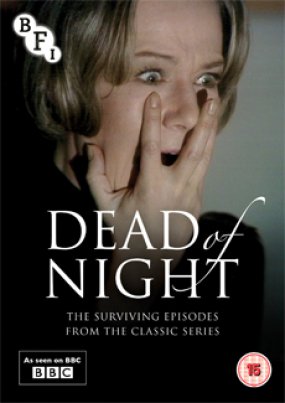 After years of unavailability, the three surviving episodes from the legendary BBC horror anthology series Dead of Night, finally come to DVD. Originally screened on BBC2 in 1972, and rarely seen since, Dead of Night has been highly sought by fans of the BBC and British horror for decades.

The Exorcism – A film By Don Taylor
The best known and perhaps the most terrifying of the episodes – four wealthy, middle-class friends (Clive Swift, Edward Petherbridge, Anna Cropper and Sylvia Kay) gather for a Christmas dinner in a country cottage only to find that the past will not rest while they feast.

Return Flight – A film by Rodney Bennett
In Return Flight, the professionalism of an experienced and respected airline pilot (Peter Barkworth) is placed under scrutiny when he encounters the ghostly apparition of a Second World War Lancaster bomber.

A Woman Sobbing – A film by Paul Ciappessoni
A middle-class housewife (Anna Massey) becomes increasingly paranoid when her nights are interrupted by the terrifying and unexplained sound of a woman crying in one of the rooms in her new house.