What The Queen saw

Explore some highlights from the BFI collections, presented to Her Majesty The Queen on the occasion of her historic visit. 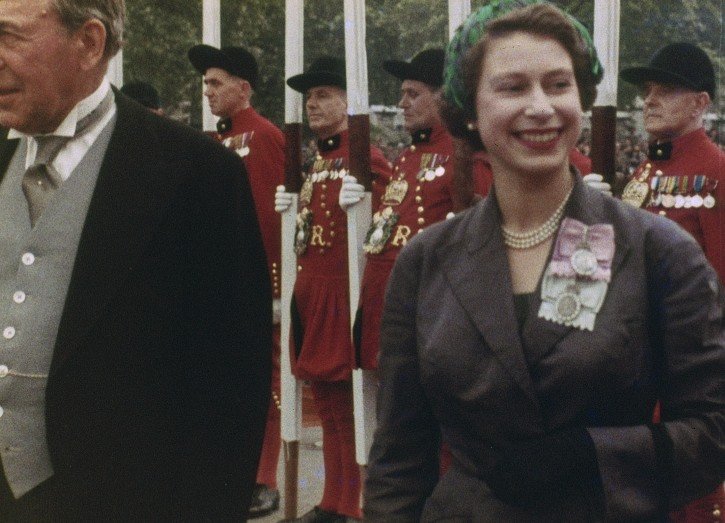 In the year of her Diamond Jubilee, Her Majesty The Queen today paid a historic visit to BFI Southbank, the BFI’s cinema on London’s Southbank that this year celebrates a diamond anniversary of its own.

Before unveiling a commemorative plaque, BFI Chair Greg Dyke said, “Given that the moving image wasn’t invented until the end of the 19th century I find it extraordinary to think that Her Majesty Queen Elizabeth II has been on the throne for more than half the time that film has been in existence.”

Her Majesty’s visit provided a perfect opportunity to remind her of some of this rich film history, of the enduring vitality of British film, and of some of the treasures held in the BFI collections.

Visiting the venue’s new BFI Reuben Library, The Queen was shown a range of materials from the library and special collections including this pencil and watercolour sketch by Alfred Junge for Michael Powell and Emeric Pressburger’s classic fantasy A Matter of Life and Death (1946). 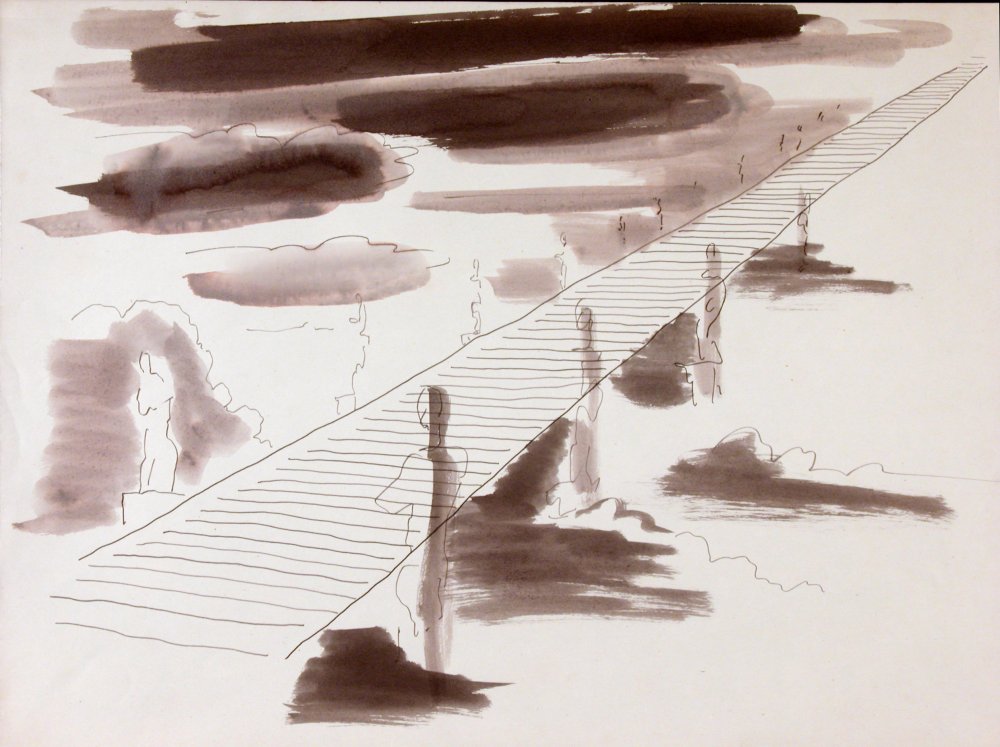 This design would be brought into vivid Technicolor life as the ‘stairway to heaven’ that transports the film’s characters from earthly reality to the monochrome afterlife. 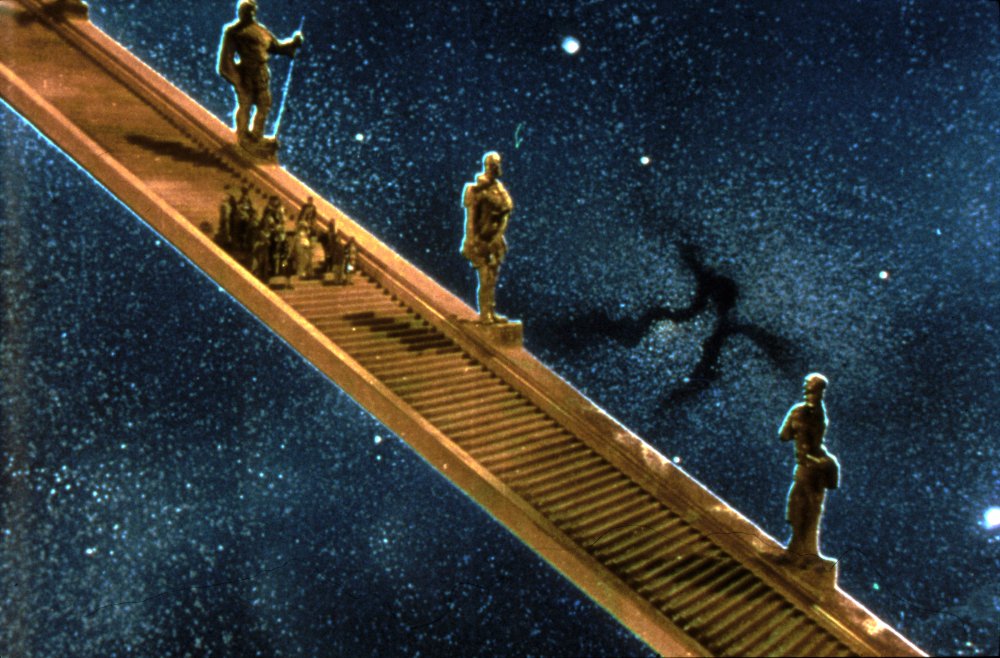 Powell and Pressburger’s film became the first ever Royal Command performance at the Empire, Leicester Square on 1 November 1946. The still below shows Queen Elizabeth (later the Queen Mother) greeting actor Reginald Gardiner, while her husband King George VI talks to the film’s star Roger Livesey behind them. 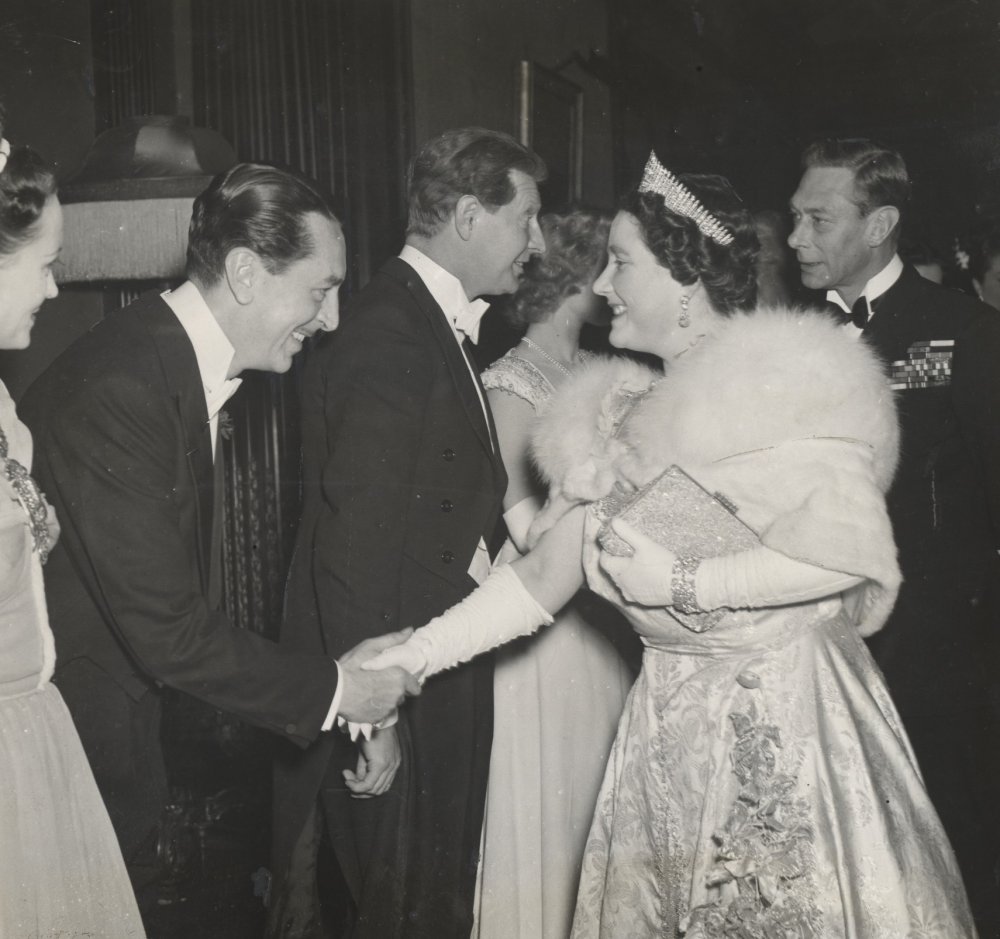 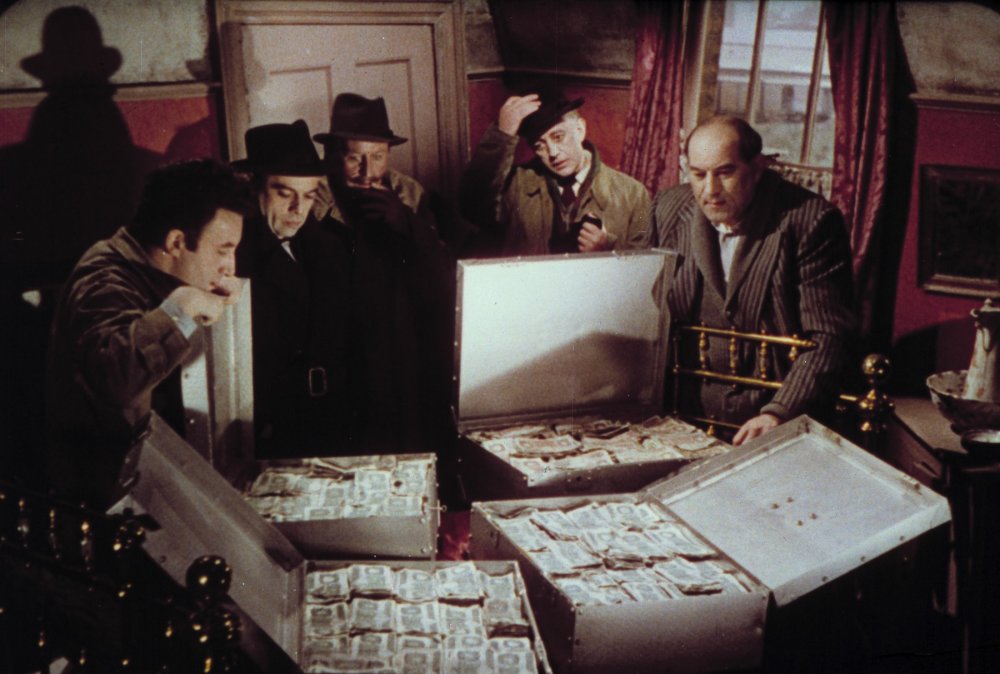 With Ealing: Light and Dark – the BFI’s two-month celebration of Ealing Studios – now underway, Her Majesty was also shown this annotated script for Alexander Mackendrick’s dark comedy The Ladykillers (1955). Featuring storyboard sketches down the right-hand side, the script offers a revealing glimpse into Mackendrick’s creative process. 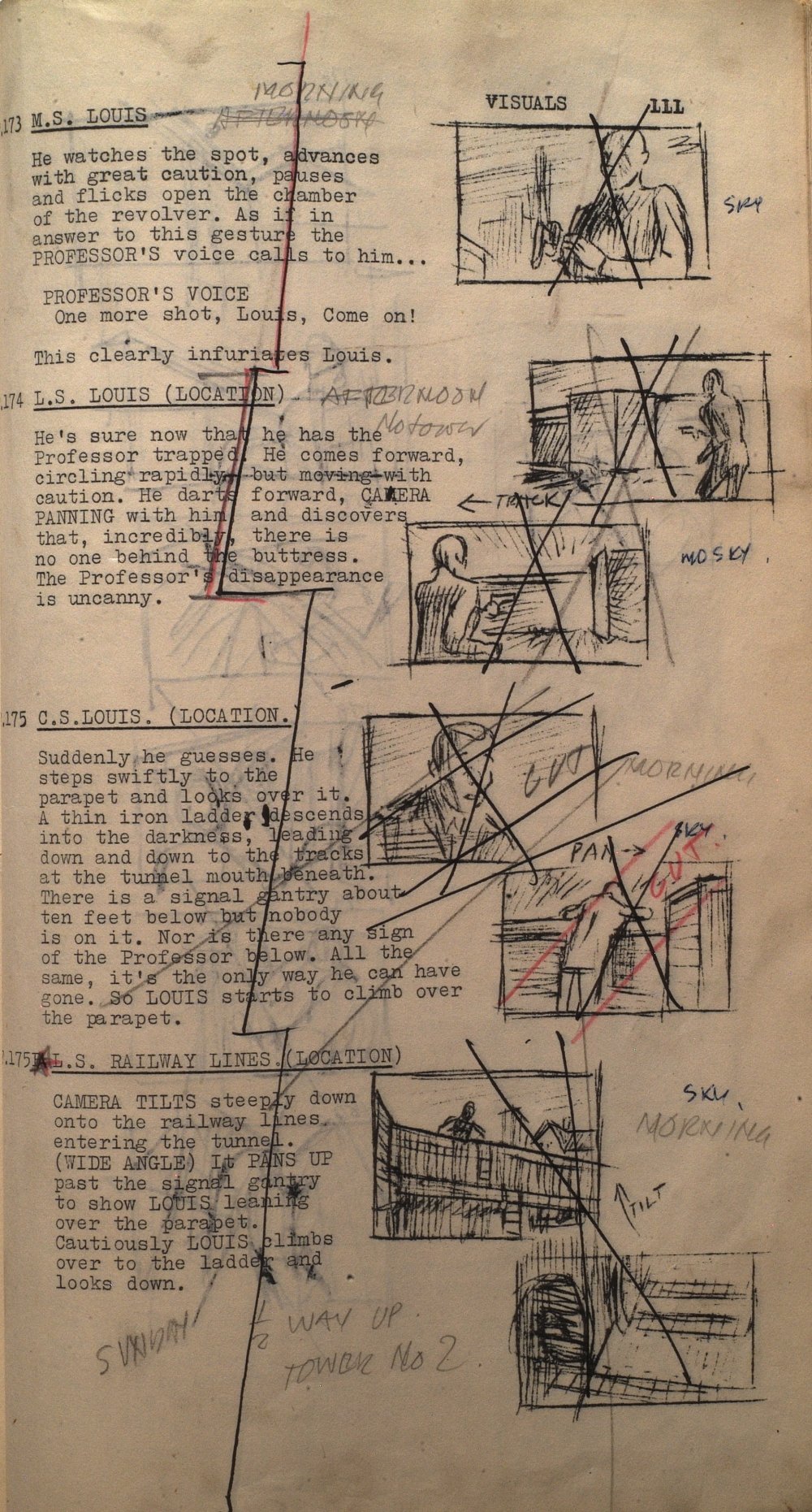 Director Alexander MacKendrick's annotated and storyboarded script for The Ladykillers

Another Ealing production is the 1947 film adaptation of Charles Dickens’s Nicholas Nickleby, directed by Alberto Cavalcanti. This pressbook contains beautiful illustrations by Edward Ardizzone, well-known for his delicate, watercolour illustrations for children’s books. 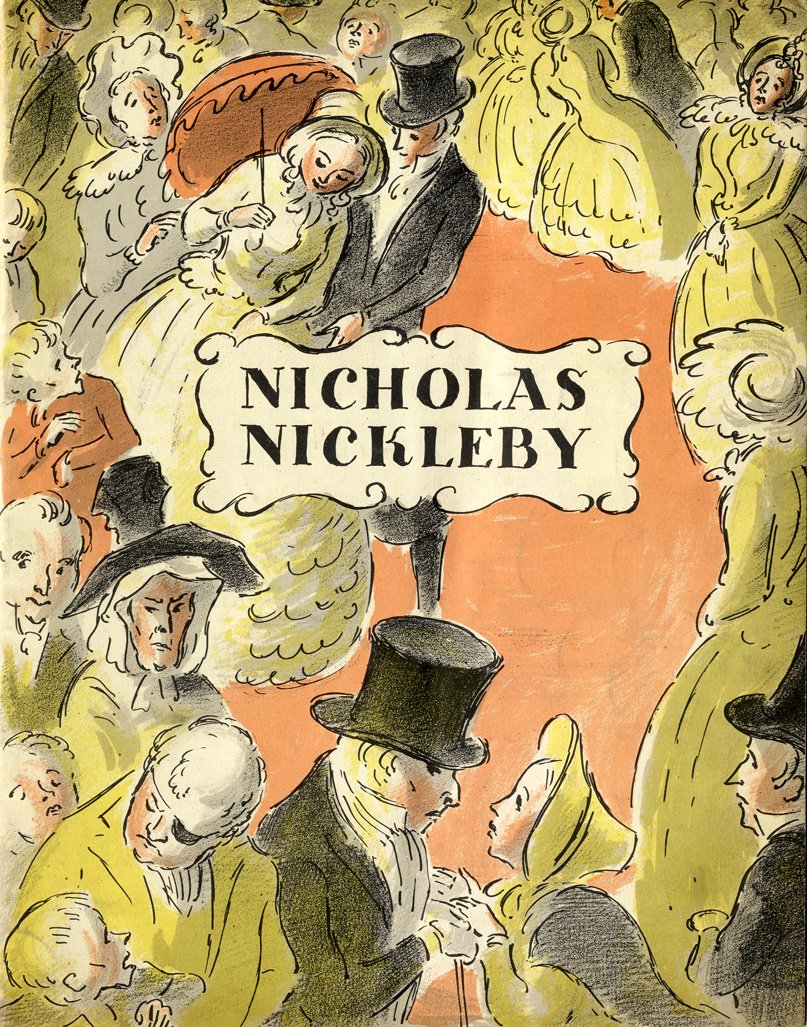 This film has a special significance for Her Majesty: the photograph below shows Princesses Margaret and Elizabeth visiting the set of the film, in the company of Reginald Baker and producer Sir Michael Balcon, in June 1946. 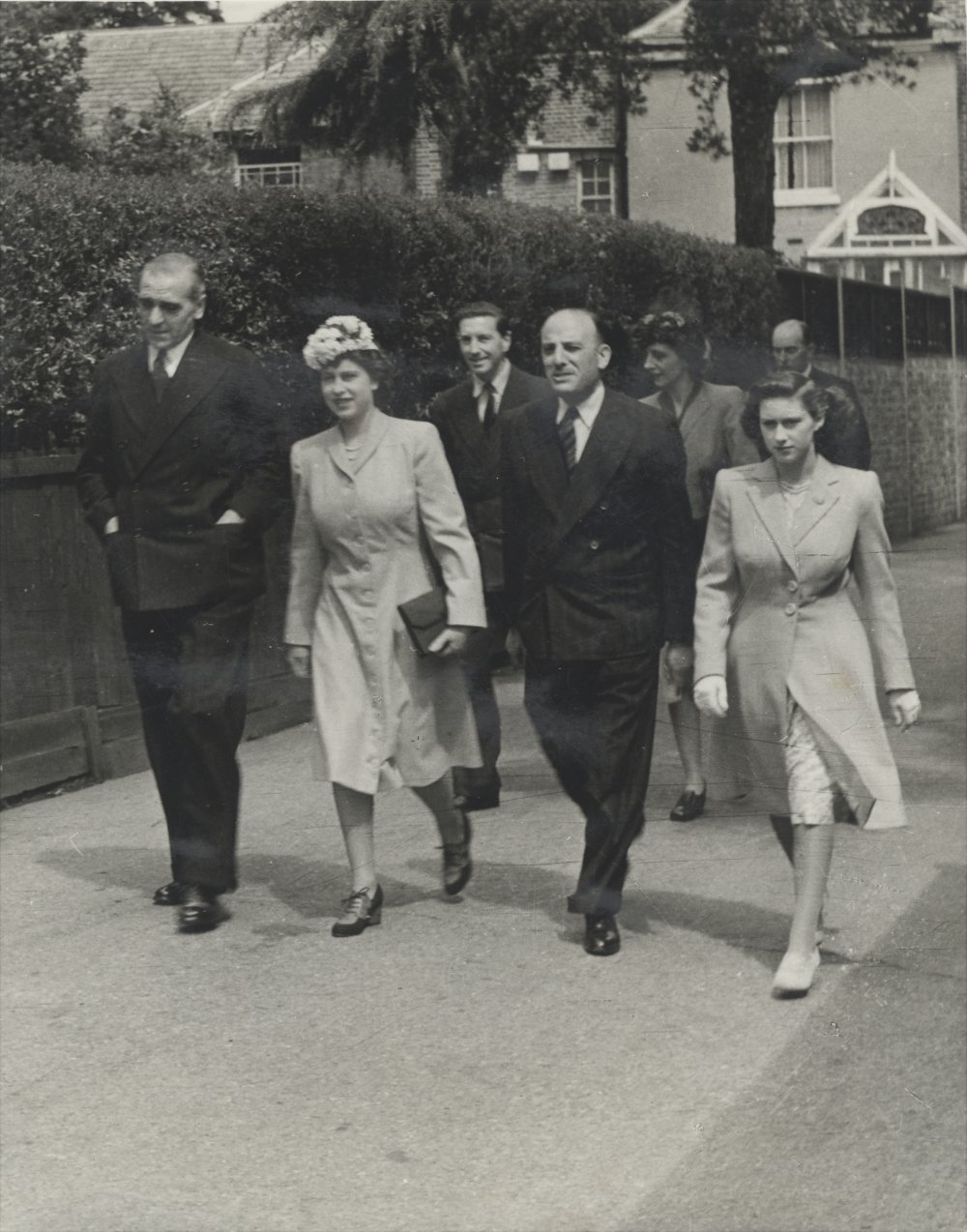 In the Mediatheque, where over 2000 archive films are viewable for free, The Queen was shown Making Fashion, a 1938 film made by the documentary filmmaker Humphrey Jennings, best known for his wartime propaganda films. An unusual item in Jennings’s filmography, Making Fashion is a glorious showcase for the Spring Collection of fashion designer Norman Hartnell, who was later royal dressmaker for Her Majesty Elizabeth II and the Queen Mother.

An invited audience then welcomed The Queen in viewing theatre NFT1, where after a showreel of highlights from British cinema, past and present, head curator Robin Baker introduced some rare gems from the BFI National Archive collection. These included this early example of Britain’s great tradition of natural history filmmaking, Wild Birds at Home (1912), for which pioneer Oliver Pike filmed grebes, coots and wild pheasants in their own habitat. It’s a beautiful example of the early practice of using stencils and coloured tints to bring the footage to vibrant life.

A documentary road movie about the filmmaker’s car journey from Land’s End to John O’Groats, Claude Friese-Green’s The Open Road (1926) also makes splendid use of colouring techniques, years before three-colour Technicolor became the standard for film features. The extracts from The Open Road screened during the royal programme show scenes in London in the years immediately prior to Her Majesty’s birth in 1926.

During the unveiling of the plaque, The Queen was presented with the photograph of her set visit to Nicholas Nickleby in 1946, and an original poster for the film – also designed by illustrator Edward Ardizzone. The full list of collection items shown to The Queen can be read here.