A rural caravanning holiday turns into a killing spree in Ben Wheatley’s new black comedy. As Sightseers goes on general release, we caught up with the director and his writer-stars Alice Lowe and Steve Oram.

This Friday (November 30) sees the release of Ben Wheatley’s Sightseers in UK cinemas. This pitch-black comedy, produced with the support of the BFI Film Fund, stars Alice Lowe and Steve Oram as Tina and Chris, a Midlands couple whose caravanning holiday descends into a serial murder spree.

Sightseers began life as a short film made by Lowe and Oram with director Paul King (The Mighty Boosh). Intended as a teaser for a TV comedy series, it was well received but deemed too dark. Fortunately director Edgar Wright saw its potential as a feature film, and put the actors in touch with Big Talk Productions, who made Wright’s own films Shaun of the Dead (2004) and Hot Fuzz (2007).

Ben Wheatley was approached to direct after the critical success of his debut feature Down Terrace (2009), a micro-budget crime drama laced with dark humour. He committed to the project while working on his follow-up, the audaciously bleak horror film Kill List (2011).

Since its world premiere at Cannes in May, Sightseers has enjoyed widespread acclaim on the international festival circuit, receiving awards for best actress (Lowe) and screenplay (Lowe, Oram and Amy Jump) at the 45th Sitges Film Festival. The film received its UK premiere at the 56th BFI London Film Festival, and has subsequently been nominated for seven BIFAs, including best director for Wheatley, and best British independent film.

Did you set out to make a comedy first and foremost, or were the film’s darker elements in place from the start?

Alice Lowe: We wanted to take the stereotype of British tourism, which has this extremely polite veneer, and do something that confounded that. But we didn’t want to make a light, Carry On-style murder comedy – we wanted it to have some psychological veracity, and to challenge people. We knew the characters had to have realistic psychologies for you to be willing to go with them on their journey. The whole movie is essentially about two damaged people coming together, triggering something in one another and becoming more than the sum of their parts.

Was the Midlands setting always integral to the project?

AL: The fact that they’re regional was very important – there’s no way they could be from London. We’re both from the Midlands ourselves, and the characters evolved from us talking about our families, and holidays we used to go on. There’s a scene in the film where Chris says he wanted to be invisible, and growing up in the Midlands you come to realise that it doesn’t have a strong identity. You can’t even take part in the north/south argument. Did you look to any real serial killers for inspiration when developing the characters?

Steve Oram: We did loads of research, and found out stuff like the fact that Fred West did DIY for his neighbours. People liked him on the street, which is astonishing when you think of what he did. But one of the recurring traits in serial killers is that they’re basically really into themselves. They’re very “me” people! They think they’re playing God, but they’re just making up the rules as they go along. Chris has his own morality, but it’s total bullshit.

AL: Tina is actually much more creative as a killer, she genuinely wants chaos. That totally fucks with Chris’s world view, but also adds an element of excitement. He decides he would rather have a partner in crime that loves him, than be alone.

What was your initial response to Ben Wheatley coming on board as director?

AL: It was so obvious he was the right person for the job. He’d just made Down Terrace which we loved, and the tone was really close to what we wanted. He agreed to do it, and then we saw Kill List which blew us away. We thought after that he’d be going straight off to Hollywood, so we were pleased he stuck by the project.

Are you worried about the very British humour translating to an American audience?

AL: I hope they might have a Shaun of the Dead take on it, where they think it’s cute – some British idiots taking on an American genre!

SO: It’s essentially a universal story. We had to take a few things out though – we couldn’t say the word ‘Biro’ for example.

You took a caravan holiday together for research purposes. How did that feed into the development process?

SO: The single most important writing tool for us was going out in that caravan and living as the characters.

AL: We really found the story then, by working out what annoyed us about each other, and by being in a very small space together for a week. We took inspiration from the landscape as well, and realised that the film had the potential to be quite cinematic. 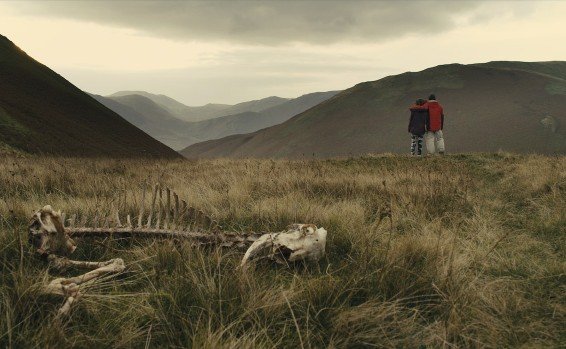 What attracted you to the project?

I knew I wanted to do a comedy after Kill List – something that might make people laugh as opposed to unhappy! I fancied doing something that was fast and loose, and the prospect of working with comedians who had an improvisation background appealed. In terms of the script, I liked that Chris’s character was quite anarchic and breaking out from his constraints, and that with encouragement Tina goes even further. I was also drawn to the sweeter rom-com elements of the story.

Did you make any significant changes to the characters?

The characters essentially remained the same, but different drafts of the script started at different points in their relationship. In the original short they’re middle-aged and they’ve been killing for years. [Co-writer and editor] Amy Jump and I took the elements of Chris and Alice’s script that we really liked, and brought some of what we’d learned from the earlier films to it, to make the structure a bit more concise.

Did you feel any pressure taking on something that Alice and Steve had been working on for years?

It’s always tricky working with writer-performers and making sure you don’t ride roughshod over that aspect of it. But at the end of the day, as a director you’ve got to be in control. As soon as you start asking people permission about stuff, you’re done. The main thing is having a consistent voice. Some of those elements weren’t in the script and needed to be added.

Sightseers seems set to attract a more mainstream audience than your previous work. Were you asked to deliver a 15 certificate film?

The more gruesome elements were important for me though, on a vaguely moral level. It’s dangerous to go Wile E. Coyote on people and bash them about, and then not show what happens to them – it ends up like The A-Team. You want audiences to understand the consequences of these characters’ actions, which are funny but also abhorrent. As a viewer you should be going from laughter to feeling guilty and back to laughter again.

All of your films tread a fine line between comedy and much darker material. Do you find it a challenge to achieve that balance?

Over the course of the editing process you identify and remove things that upset the balance, and then tune all the elements of the film so they’re singing the same tune. The original assemble edit was four hours long. Whole sections were taken out because they didn’t fit within the overall scheme.

Were you consciously working towards a 90-minute running time, in line with your other films?

Yes, I’m a big fan of 90 minutes. Or even 85. That’s to do with my own experience of cinema seats being a bit uncomfortable, plus I don’t know why movies are so long these days – it confuses me. There are plenty of brilliant 90-minute movies sitting inside much longer movies. As someone who stopped watching The Lord of the Rings after they threw the ring down Mount Doom, I can testify to that.

You’ve acquired a reputation for working very quickly. Is that an integral part of your process?

I like shooting fast because I think it’s good for the actors, to keep them in the moment and help them concentrate on their performances. At the end of the day no-one really cares what your film looks like if the acting is bad. So with a low-budget film your biggest asset is the performances. Also the more modest the budget, the more chance the film has of making money, and thus the more films I can go on to make in the future.