On set with Alfred Hitchcock

Whether recreating Alpine ski slopes in a London studio, mastering the complex technical setups for Rope, or filming on location in smalltown California, Alfred Hitchcock kept a firm grasp on every aspect of his films’ production. Nathalie Morris introduces a selection of behind-the-scenes images of the master at work. 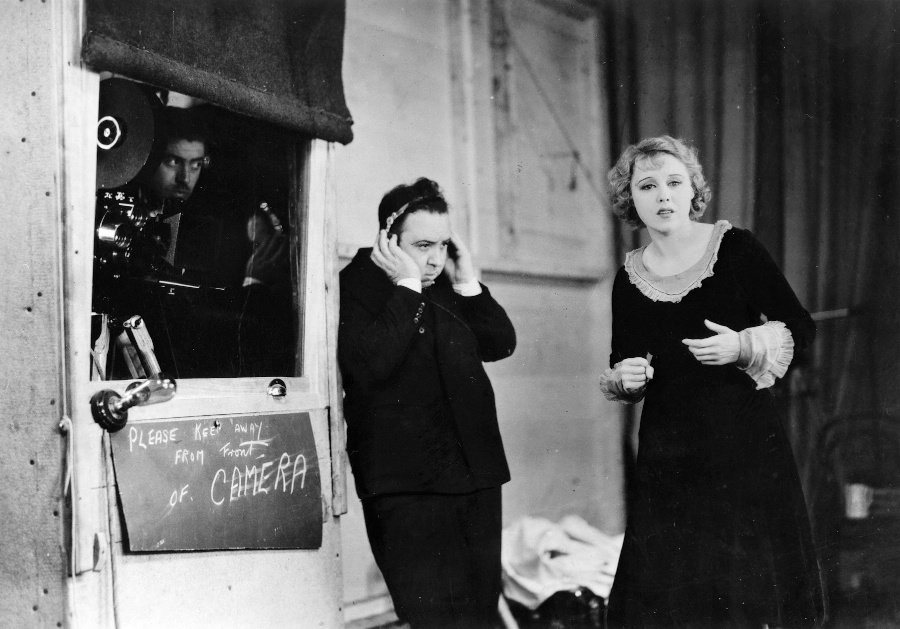 Hitchcock on the set of Blackmail (1929) with the film’s star Anny Ondra. Blackmail was started as a silent in spring 1929, before the decision was taken to make it a full talkie. The only problem with this was the Czech star Ondra’s heavy accent, which was unsuited to her role as a West London shopkeeper’s daughter. Hitchcock is pictured here conducting a sound test (available to view here and in BFI Mediatheques). He came up with the novel solution of using English actor Joan Barry to stand off camera and speak Ondra’s lines. 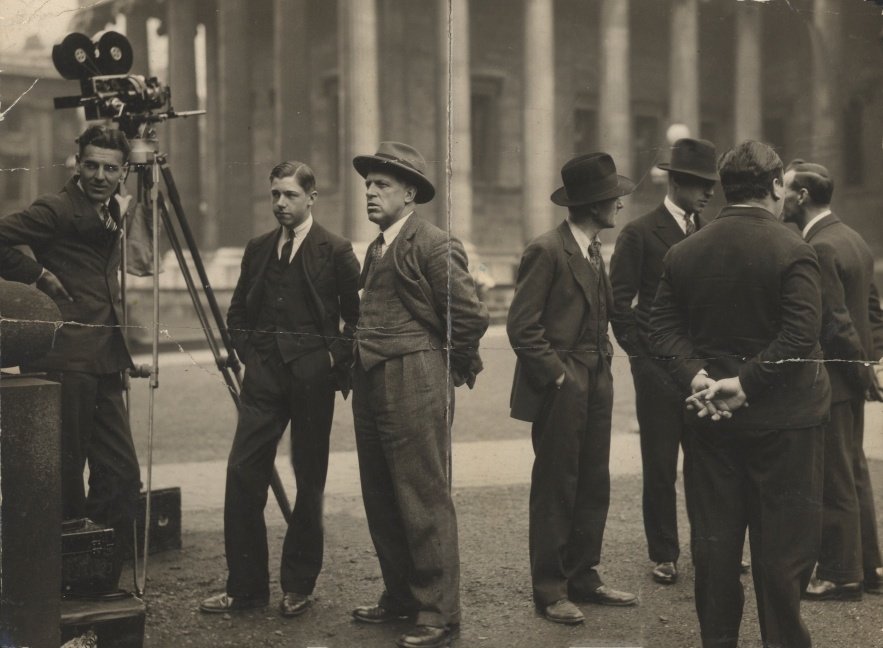 This is a rare picture of Hitchcock on location at the British Museum with cameraman Jack Cox, shot outside as blackmailer Tracy (Donald Calthrop) tries to evade the police by running into the museum. Hitchcock didn’t have permission to film inside the museum so reconstructed it with special effects. Although he has his back to the camera, the director is clearly recognisable. 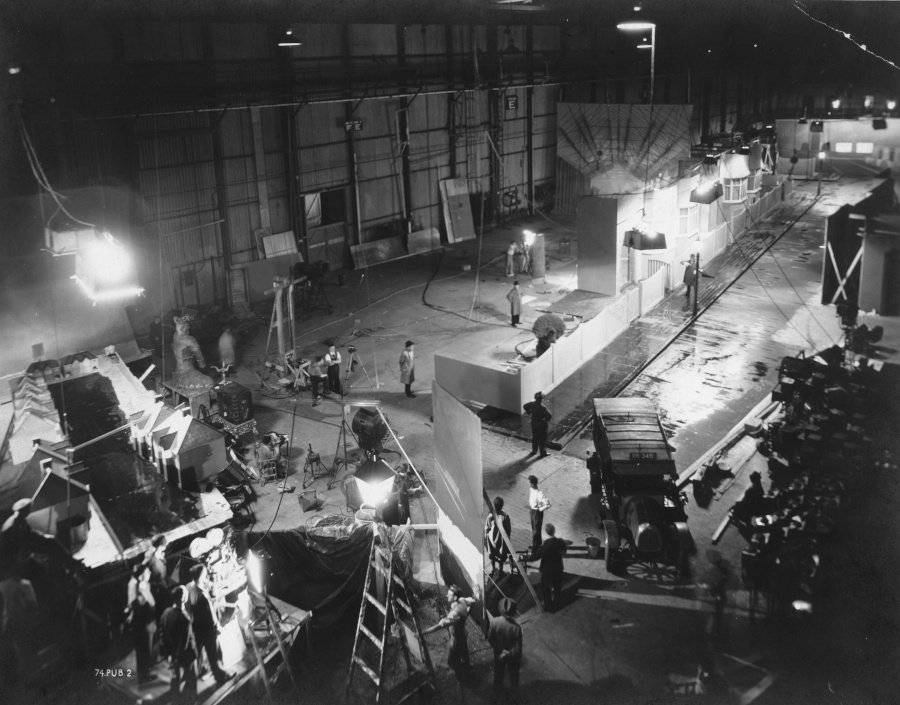 This is the large street set for the opening scenes of Rich and Strange (1931), in which the character of Fred (Henry Kendall) is seen leaving his humdrum job and returning to his suburban home. Spot the tiny but again unmistakable figure of Hitchcock with his hands on his hips surveying the set in the centre of the image. 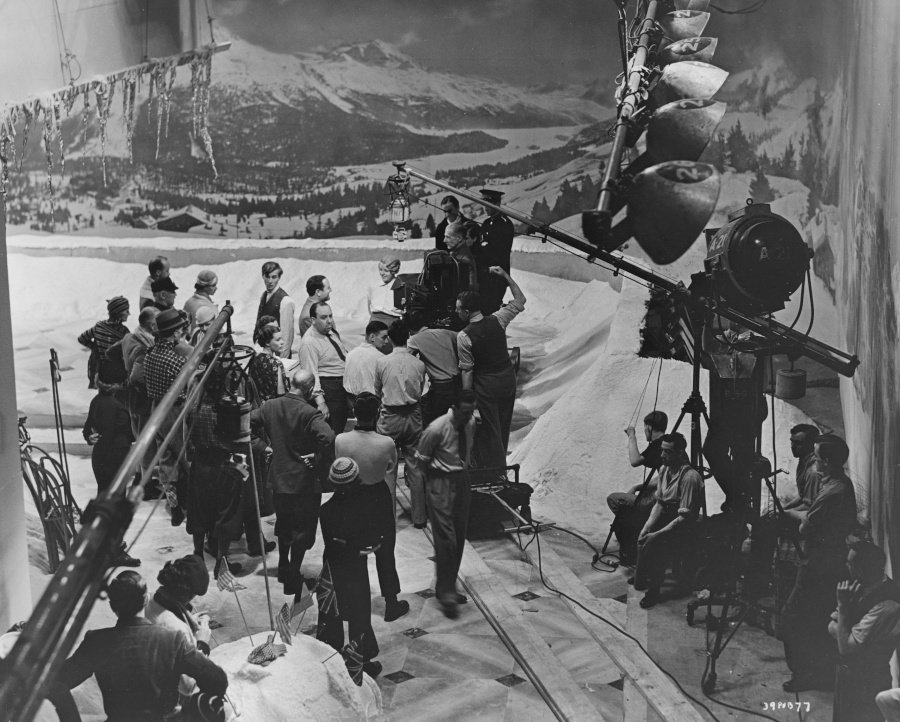 On the St Moritz set of The Man Who Knew Too Much (1934). The film opens in St Moritz, Switzerland (where Hitchcock and his wife Alma Reville honeymooned), recreated here in the studios of Lime Grove, London. Edna Best plays a competitive sharpshooter (Doris Day took the role in Hitchcock’s own 1955 remake and becomes a semi-retired singer instead). St Moritz didn’t feature in the remake, where the opening scenes are shifted to Morocco (Hitchcock shot much of this on location in North Africa). 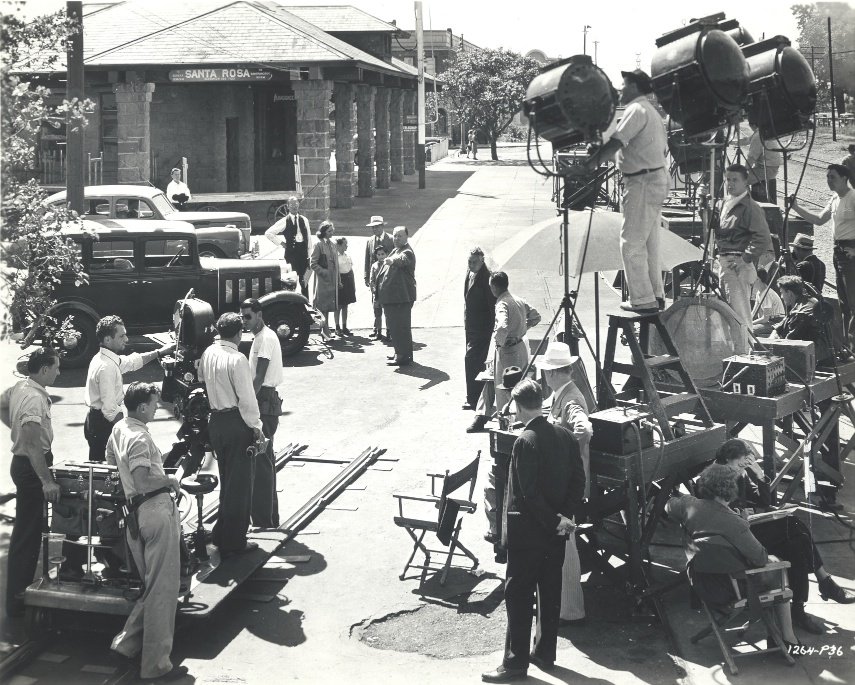 Scouting for an ideal smalltown American location led Hitchcock to Santa Rosa, California for Shadow of a Doubt (1943). Unfortunately, the residents were so pleased that their town was picked to feature in the director’s film that they repainted all the houses, which the film crew duly had to re-age to make the town look authentic again. 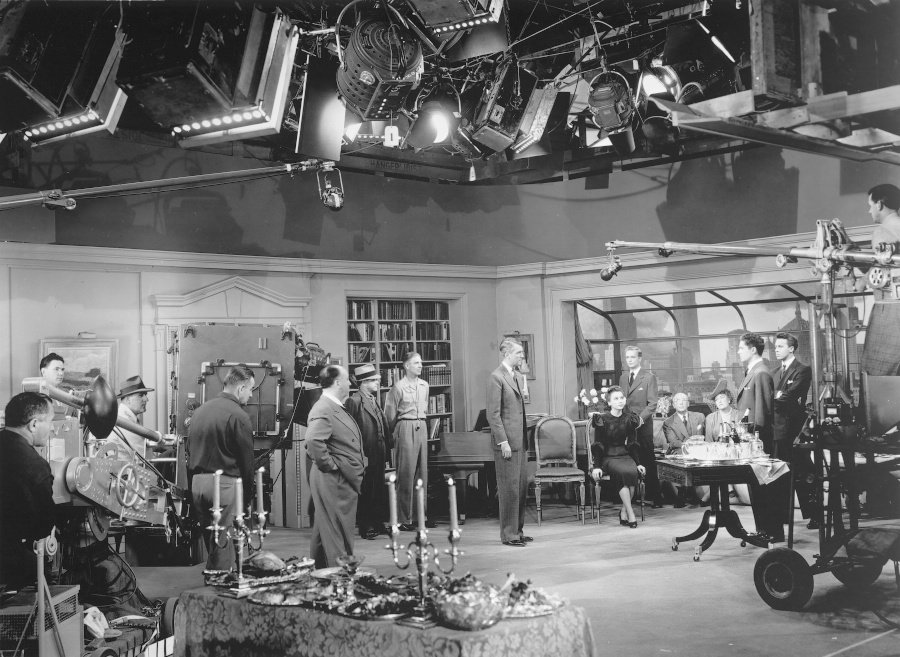 The elaborate setup of Rope (1948), the story of two student killers who host a party in the apartment where the body of their victim is concealed. For Hitchcock’s experiment in long, unbroken takes, the walls and furniture of the apartment set had to be moved by out-of-shot prop men to accommodate the roaming camera. 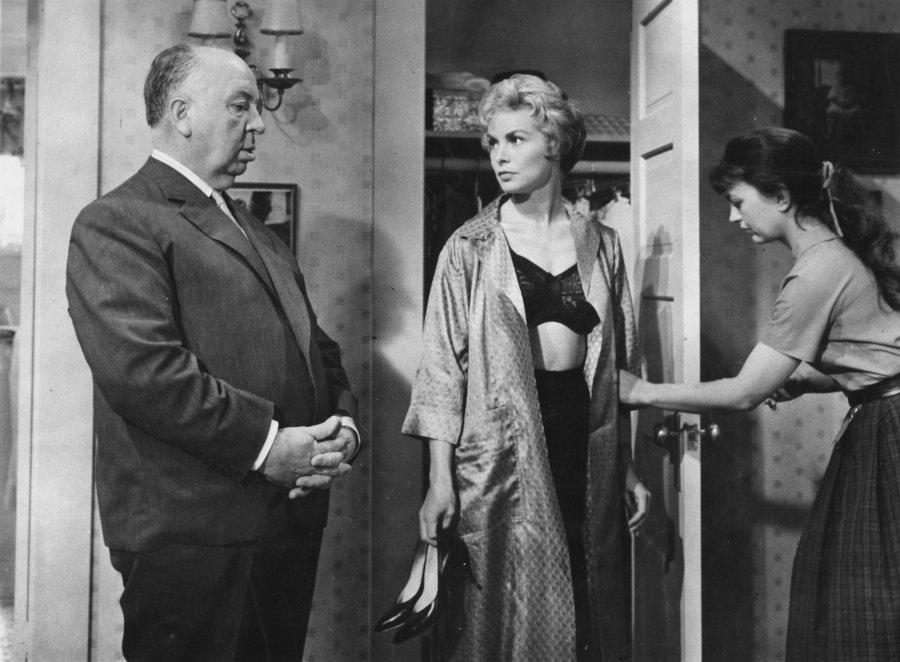 On set with Janet Leigh for Psycho (1960). In contrast to the glossy production values of his previous film, North by Northwest (1959), Hitchcock shot Psycho cheaply in only 30 days, in black and white, and using the television crew from his series Alfred Hitchcock Presents (1955-62). Unusually for a film at the time, but standard practice for television, Hitchcock used two cameras for many scenes, enabling him to edit together shots from different angles without interrupting the flow of his actors’ performances. 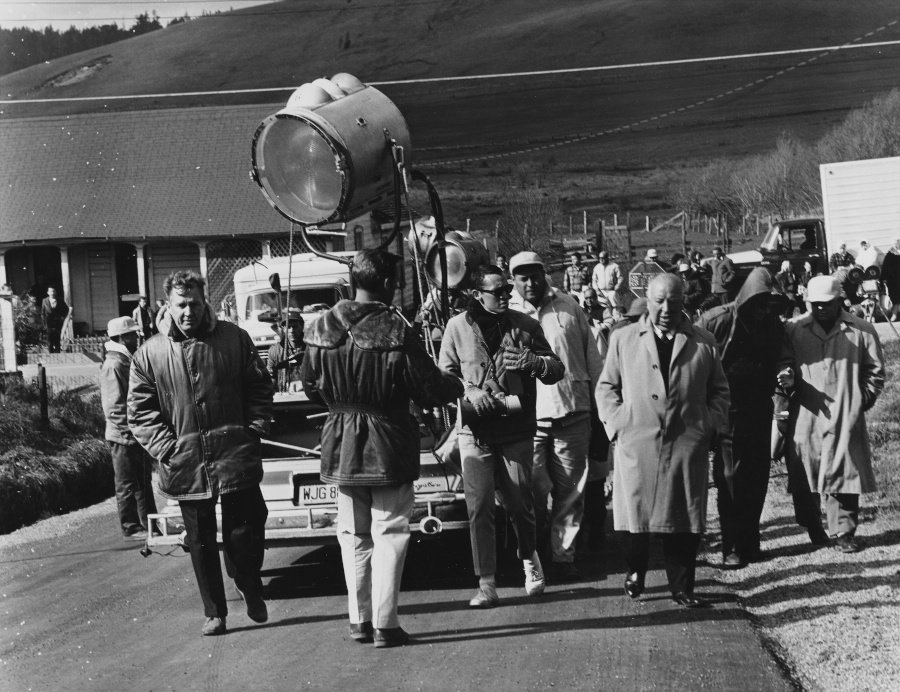 On location for The Birds (1963). Originally set in Cornwall, Hitchcock changed the setting of Daphne du Maurier’s short story to Bodega Bay in Northern California. For his earlier du Maurier adaptation, Rebecca (1940), he also used California (the rugged coastline of Catalina) but this time to pose as the Cornish landscape around Manderley. 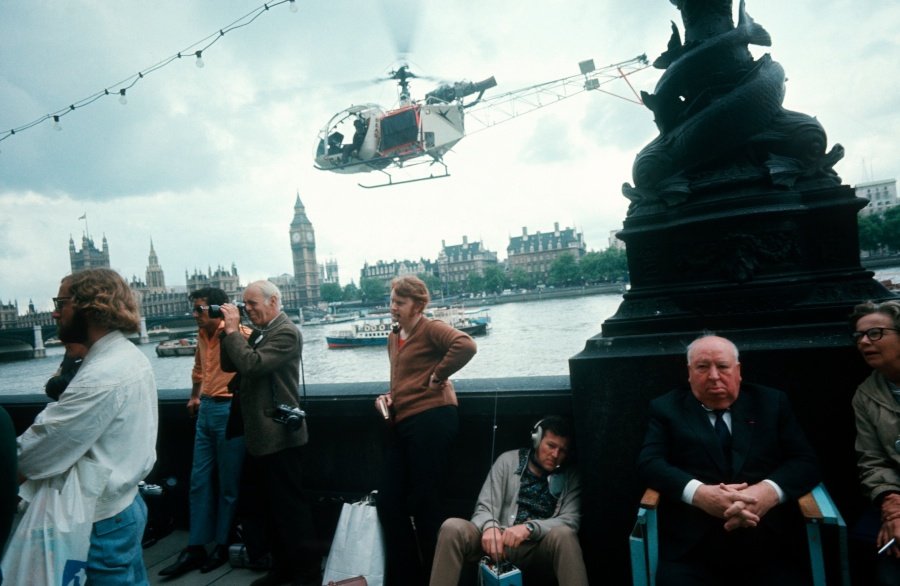 By the River Thames for the filming of Frenzy (1972), Hitchcock’s first film to be shot in Britain since portions of the second Man Who Knew Too Much (1955). In the trailer a dummy of his corpse is seen floating down the river (“rivers can be very sinister places”, Hitchcock tells us), while Hitchcock’s traditional cameo appearance comes at the beginning of the film as a crowd gather outside London’s County Hall.