As Stanley Kubrick’s The Shining is rereleased nationwide, Kubrick’s producer Jan Harlan discusses the genesis of this ‘symphony in schizophrenia’. 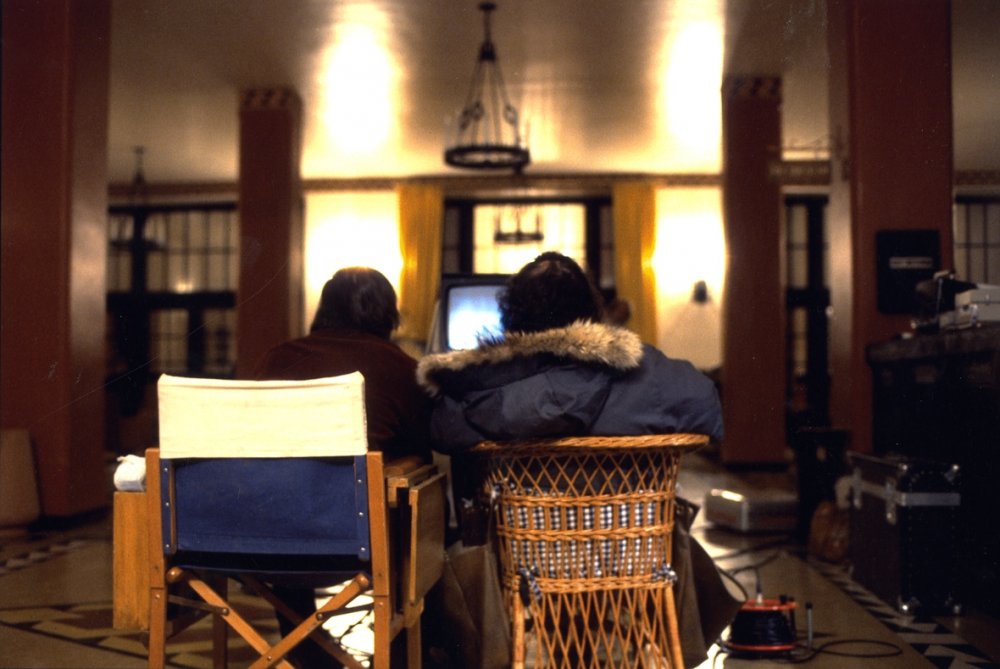 Jack Nicholson and Stanley Kubrick on set
Credit: With thanks to the SK Film Archives LLC, Warner Bros., the Kubrick family, and University of the Arts London.

Stanley Kubrick’s creative processes remain a source of fascination for film fans still under the spell of his 13 feature films, each a singular vision and many cinematic milestones of the second half of the 20th century.

No Kubrick film ever gave any suggestion as to what his next project would be: just as the frontier-pushing science-fiction of 2001: A Space Odyssey (1968) was followed by an abortive attempt to bring the life of Napoleon to the screen, so his eventual foray into the 18th century, with the picaresque fortunes of William Makepeace Thackeray’s gambler-hero Barry Lyndon (1975), followed on from the violent future-visions of A Clockwork Orange (1971).

In the late 1970s, with the Thackeray adaptation under his belt, Kubrick came across a contemporary horror novel by Stephen King called The Shining, the story of a would-be novelist who takes a job as winter caretaker at a hotel high in the Colorado Rockies. A King novel had already provided the basis for Brian De Palma’s acclaimed chiller Carrie (1976), but it’s fair to say that this supernatural material seemed a curious choice for a director of such gravitas.

The resulting film, starring Jack Nicholson as the manic caretaker Jack Torrance, more than bears out Kubrick’s choice: The Shining reverberates with meaning, both as a richly associative spin on a haunted house story, and as an interior odyssey into the workings of a disturbed mind. 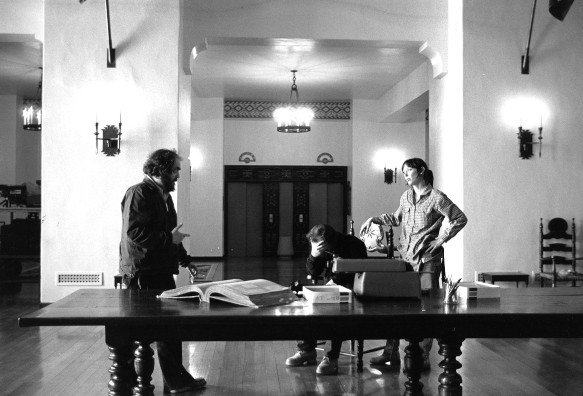 Kubrick, Nicholson and Shelley Duvall in The Overlook Hotel
Credit: With thanks to the SK Film Archives LLC, Warner Bros., the Kubrick family, and University of the Arts London.

The Overlook Hotel is a cavernous Kubrickian location as indelible as the revolving spacecraft of 2001 or the Pentagon war room of Dr Strangelove (1963). Its vast, eerie emptiness is mapped out for the viewer with hypnotic Steadicam shots following Torrance’s young son Danny (Danny Lloyd) as he trundles the corridors in his go-kart.

These gliding camera movements owe less to horror cinema and more to Alain Resnais’s art-house conundrum Last Year at Marienbad (1961), another tale of a peculiar hotel whose residents may or may not have been there before.

The simple contrast on the soundtrack as the go-kart’s wheels travel over carpet or wooden flooring are a gently disquieting touch, just one example of the director’s gift for bringing his imagination to life with brilliant formal precision. 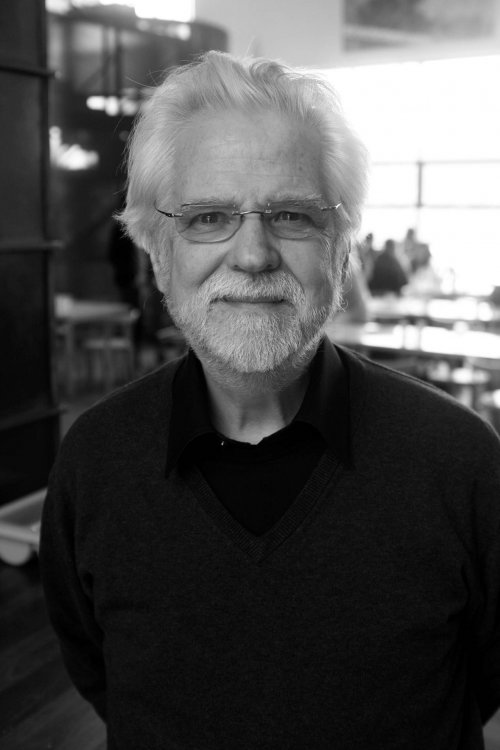 Few people can offer greater insight into Kubrick’s working methods than Jan Harlan, the director’s brother-in-law and executive producer on all of Kubrick’s work from Barry Lyndon to Eyes Wide Shut (1999) and A.I. Artificial Intelligence (2001), the latter project taken over by Steven Spielberg after Kubrick’s death.

Born in Karlsruhe, Germany in 1937, Harlan has been an eloquent academic speaker on Kubrick and his legacy, co-editing the book Stanley Kubrick’s Napoleon: The Greatest Movie Never Made, and directing a 2001 documentary on the filmmaker, Stanley Kubrick: A Life in Pictures.

As The Shining is rereleased nationwide in the longer American cut of the film, which has never been seen before in UK cinemas, we spoke to Kubrick’s long-time right-hand man about the genesis of a very special horror film.

How did you first meet Kubrick?

I met him when I lived in New York. I had a previous profession since the early 1960s: I worked in business planning, organisation, and data processing. I met Stanley regularly because he was already married to my sister, so he was my brother-in-law. I had not the slightest intention of working with him, but I met him often and we became very friendly. We used to talk about the only area where I was on his level, which was music.

Years later I went back to Zurich and Frankfurt, then in 1969 – about five, six years later – he asked whether I would join him to go to Romania for one year for his project on Napoleon. My job would have been liaising with the Ceausescu regime and organising things. I speak German and French, which at that time were better than English in that particular communist country. The company I worked for said, “Oh you must do this. It’s a great opportunity.” And so I came to England for pre-production and getting things organised. My wife totally fell in love with England and never wanted to leave.

I worked with [Kubrick] very, very well, but then MGM pulled out and the project never happened. I decided to go back to Zurich or Frankfurt or New York, but he said, “We’ve worked well together – why don’t you stick around? It might be nice to do something else.” So the first thing I did was buy the rights to what, 30 years later, became Eyes Wide Shut – Traumnovelle [by Arthur Schnitzler]. He was totally in love with that novel.

So we made A Clockwork Orange and I stuck around and learned how things worked. Filmmaking isn’t different from many other processes which involve organising things, and that’s what I do. Getting things at the right time at the right price – basically that’s what a producer does, a line producer anyway. I loved it: I liked him, he liked me, one thing lead to the other and I ended up working with him for 30 years. 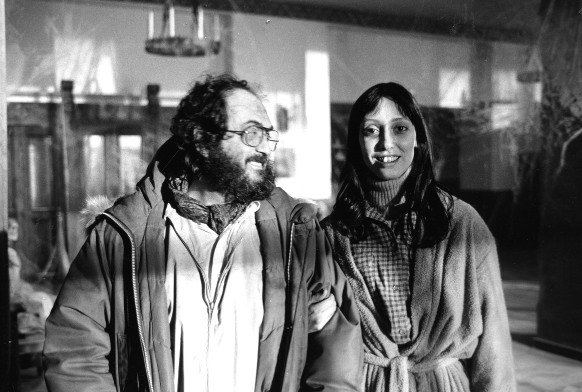 Kubrick on set with Shelley Duvall
Credit: With thanks to the SK Film Archives LLC, Warner Bros., the Kubrick family, and University of the Arts London.

Do you remember how The Shining first came about?

Yes. Warner Brothers offered it to him. I think it was [Warners head] John Calley. Stanley was a bit reluctant because basically all his films are very serious and full of political or social comment, from Paths of Glory (1957) to Eyes Wide Shut – all very serious films. So he was bit reluctant but then he thought, actually why not? It’s quite interesting, this symphony in schizophrenia. But he needed to have the right to write what he wanted, and Stephen King agreed that he could adapt the story to his heart’s content. Stephen King was very happy that Stanley Kubrick would be making a film out of his book.

Then of course Stanley wanted it full of ambiguity. Nothing had to make sense because the whole story doesn’t make sense – it’s a film about ghosts. The film starts and in the first five minutes there’s something strange going on. Something strange coming out of the music, which is this mix of Berlioz’s ‘Dies Irae’, electronically distorted. You see a beautiful landscape, and there’s this guy who goes for a job interview [as the winter caretaker of The Overlook Hotel]. Later we learn that he has always been the caretaker! What happened here? There’s no explanation.

So it’s a very strange thing. Obviously we realise very soon – through the boy initially – that there’s something very very fishy, and Stanley really liked that idea of making a film where everything is completely confused. The main character types hundreds and hundreds of pages filled with the same sentence without realising that he’s totally nuts. We go into big ballrooms and a big hotel room; we see a titchy little hotel from the outside which could never contain these rooms. There’s one thing after another which doesn’t make sense.

The only straight person is the mother. That’s important: the mother is completely normal, fighting for her son – who’s also a little bit funny. Stanley thought that was a real challenge. In a way it’s a fairy tale, a gruesome fairy tale that – like all fairy tales that we tell to children – have an element of realism. As unrealistic as fairy tales always are, if there wasn’t a reality that we could translate into our own fantasy, in our own life, it would be boring. The interest is only because of a potential reality.

So they stuck to their principles to the very end. At the end we see a photograph of a ballroom in 1923, and there is [Jack Torrance] because he’s always been the caretaker. You explain to me why! There is no explanation. A famous Kubrick sentence is, “Never try to explain something that you don’t understand yourself.” If you make such a film, then just go all the way. And he did. 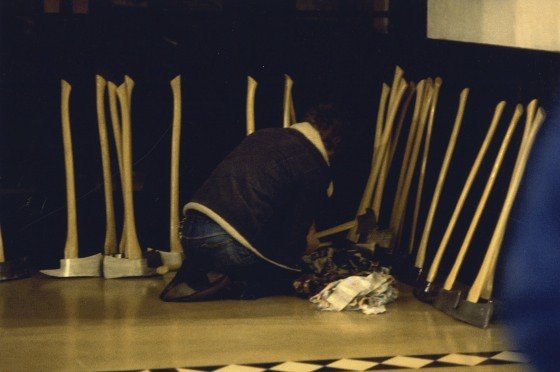 The prop master’s selection of axes for the film
Credit: With thanks to the SK Film Archives LLC, Warner Bros., the Kubrick family, and University of the Arts London.

The film wasn’t particularly well received in the beginning because people who expected a real horror film were disappointed because there was no resolution. People who expected a good Stanley Kubrick film (a serious matter!), they were disappointed because it wasn’t a terribly serious film. He had to live with that. His films always split the audience, and split the critics, and that was true from the very first film to the last.

Kubrick is famous for his meticulousness and his perfectionism…

That’s why his films last. That’s the mark of an artist, that his work doesn’t disappear. All his films from Paths of Glory, even The Killing [1956]… Dr Strangelove, which is as modern as ever. 2001, unsurpassed… This is true for great painters, great novelists, great composers, so it is for great filmmakers. It doesn’t mean that everybody likes it. That’s not the criterion. Not everybody is taken by the French Impressionists, but they will never go away!

Were there other horror films that Kubrick admired or that inspired him for The Shining?

Horror films weren’t really his number one love. He admired many other filmmakers very much. He admired Ingmar Bergman. He thought Woody Allen was unique in his best films. He thought Martin Scorsese was such a daring fellow, to really go on the edge. He admired people who tried something new and took the risk of falling flat on their face.

The American version of The Shining is longer than the one that came out in the UK. Do you remember why Kubrick decided to cut some sequences?

Because it was not very well received. Warner Brothers thought it was very ambiguous. And maybe it was a bit long. Kubrick said, “OK that’s fine, we’ll make it a bit shorter!” He was not that stubborn. So we made it a bit shorter for the rest of the world. In America, it was the first release and it was then cut a bit. 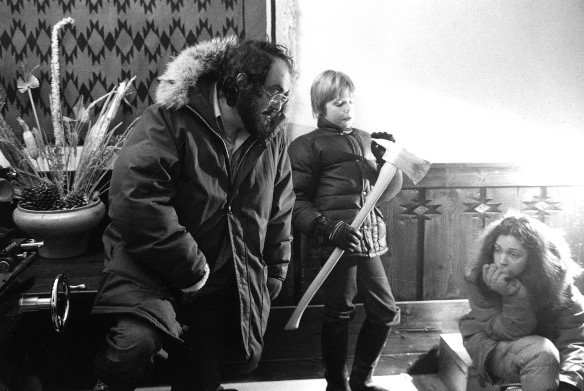 Stanley Kubrick with Jan Harlan’s son Manuel
Credit: With thanks to the SK Film Archives LLC, Warner Bros., the Kubrick family, and University of the Arts London.

Would Kubrick rewatch The Shining in later years?

Jan Harlan is taking part in the panel discussion The Shining: Horror’s Greatest Achievement? at BFI Southbank on 7 November. He introduces his documentary Stanley Kubrick: A Life in Pictures on 14 November.

The Archive of acclaimed filmmaker Stanley Kubrick is housed in the archives and special collections centre at University of the Arts London. It is available to University students and staff, members of other Higher Education Institutions internationally, and interested members of the public. The Archive provides a unique insight into the filmmaking processes of Stanley Kubrick, including his extensive research, screenwriting and production techniques, photography and film distribution and reception.

The University of the Arts London Archives & Special Collections Centre makes available collections that inform, inspire, encourage and excite a diverse range of audiences in support of their creativity, learning and research in the arts, design and communications. The Centre includes facilities for researchers to view film, use laptops and see selections of the holdings in display cases.

For further information on booking a visit and making an enquiry:
The University Archives and Special Collections Centre is based at London College of Communication, Elephant and Castle, London, SE1 6SB.  Email: archive-enquiries@arts.ac.uk
Tel: 020 7514 9333.