Hitchcock writes home from the making of his first film.

Alfred Hitchcock directed more than 50 feature films over the course of his 60 year film career. This letter was penned by the novice director while he was busy working on the first of these, The Pleasure Garden, in Munich in 1925. Writing back to his friend and colleague, the director and editor Adrian Brunel, Hitch is sparing of the details of what he later described as ‘a nightmare’ which gave him ‘some of the nastiest shocks of [his] whole life’. 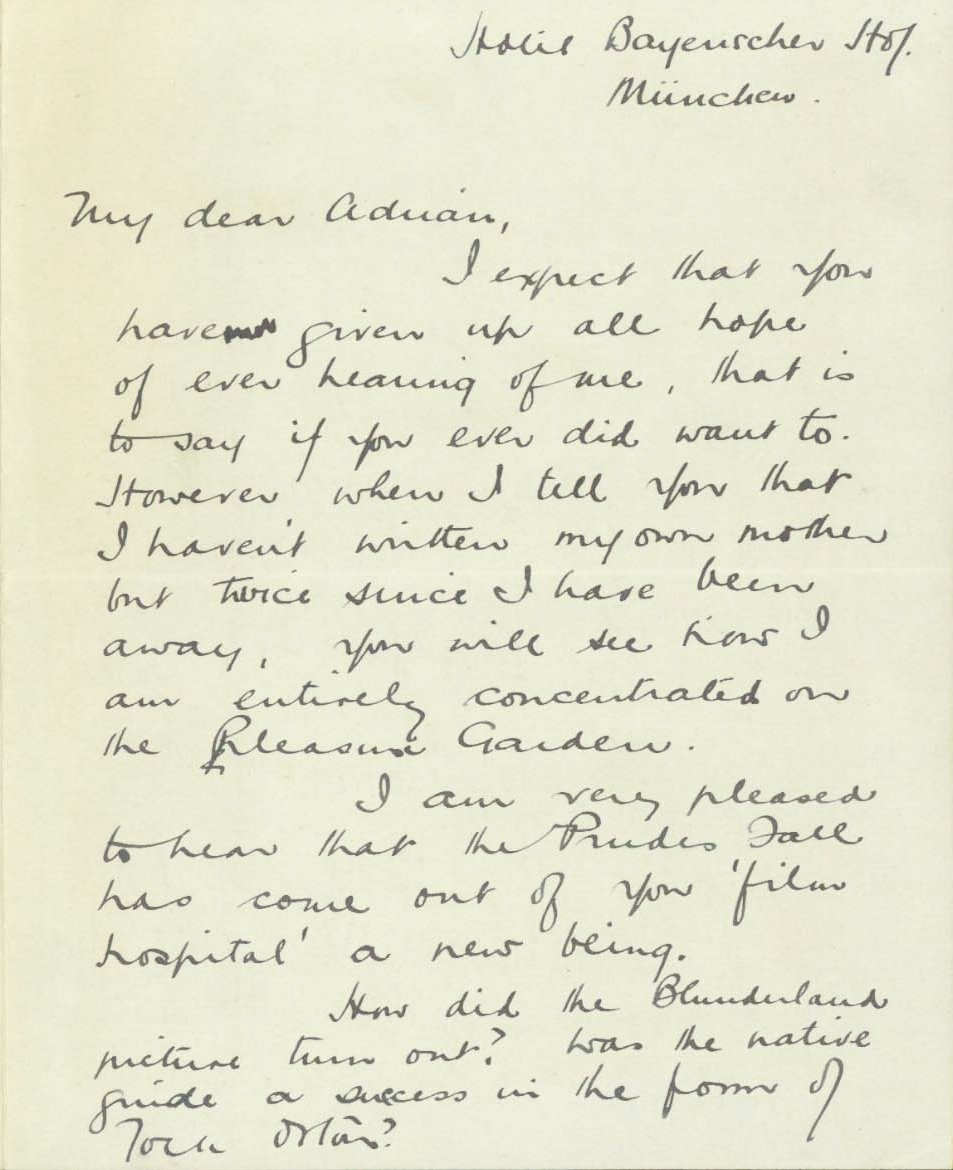 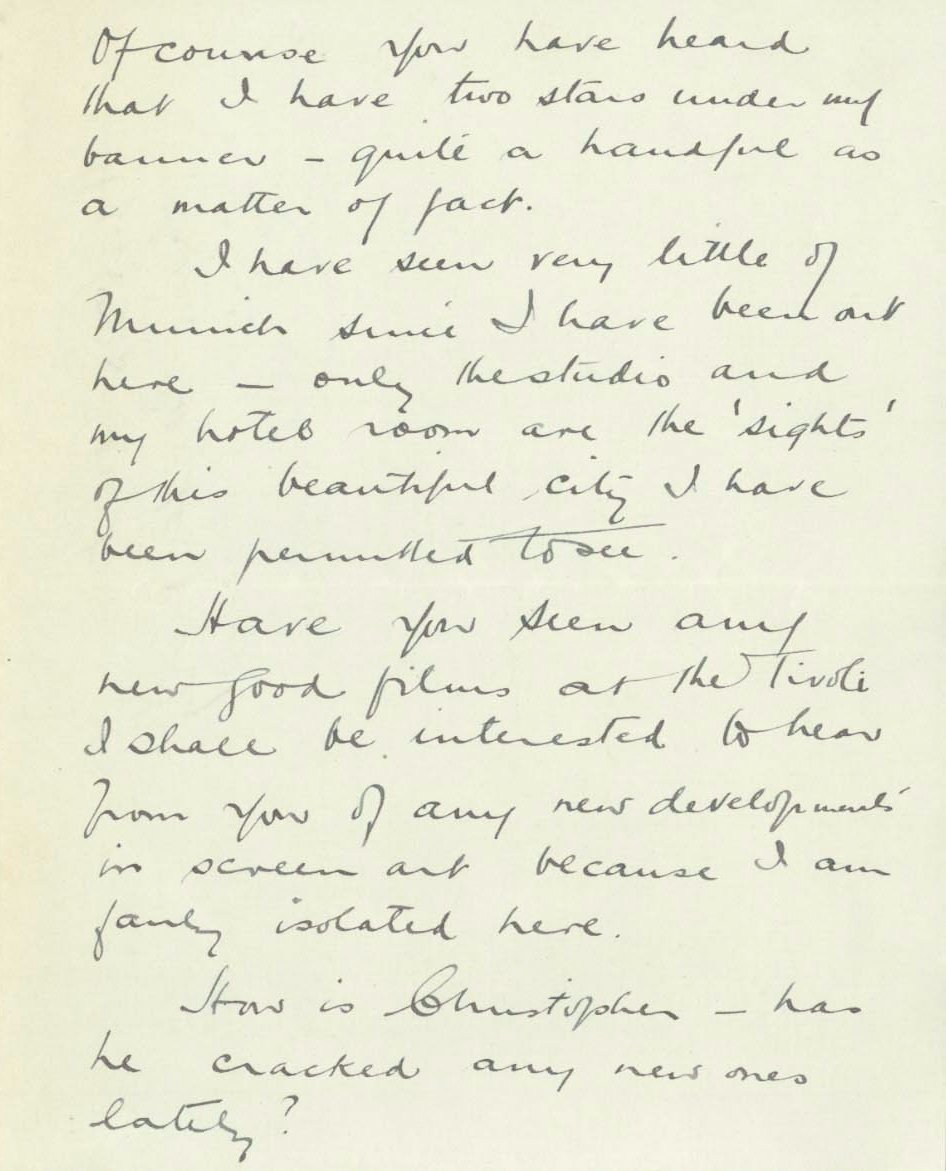 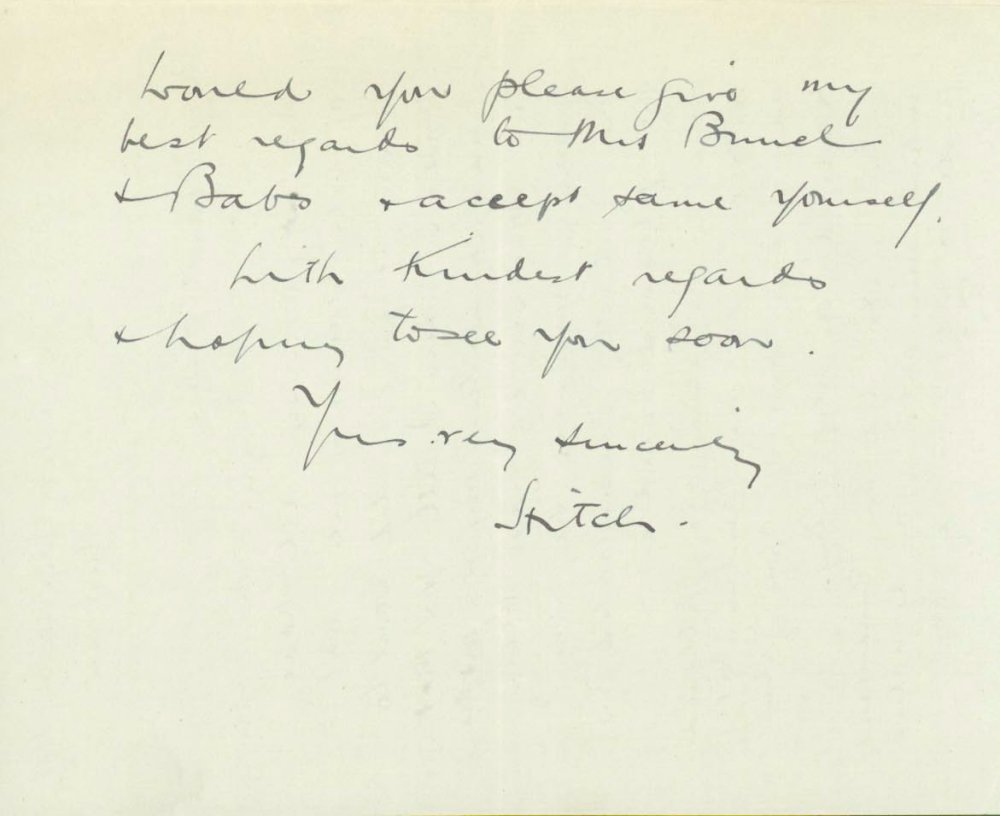 I expect that you have given up all hope of ever hearing of me, that is to say if you ever did want to. However, when I tell you that I haven’t written my own mother but twice since I have been away, you will see how I am entirely concentrated on The Pleasure Garden.

I am very pleased to hear that The Prude’s Fall has come out of your ‘film hospital’ a new being.

How did the Blunderland picture turn out? Was the native guide a success in the form of Jock Orton?

Of course you have heard that I have two stars under my banner – quite a handful as a matter of fact.

I have seen very little of Munich since I have been out here – only the studio and my hotel room are the ‘sights’ of this beautiful city I have been permitted to see.

Have you seen any new good films at the Tivoli? I shall be interested to hear from you of any new developments in screen art because I am fairly isolated here.

How is Christopher – has he cracked any new ones lately?

Would you please give my best regards to Mrs Brunel and Babs and accept same yourself.

With kindest regards and hope to see you soon.

The making of The Pleasure Garden was a steep learning curve for the young Hitchcock. Much of the film was shot on location in Italy before cast and crew returned to studios in Munich. By the time Hitch wrote this letter he’d already been in trouble with the authorities (a particular nightmare given his well-publicised fear of the police), overspent his budget, had film stock confiscated and his money stolen – to say nothing of discovering some important facts about female biology.

The arrival of his two American stars, Virginia Valli and Carmelita Geraghty, caused further problems, not least because the inexperienced Hitchcock was nervous about directing an established Hollywood actress like Valli. 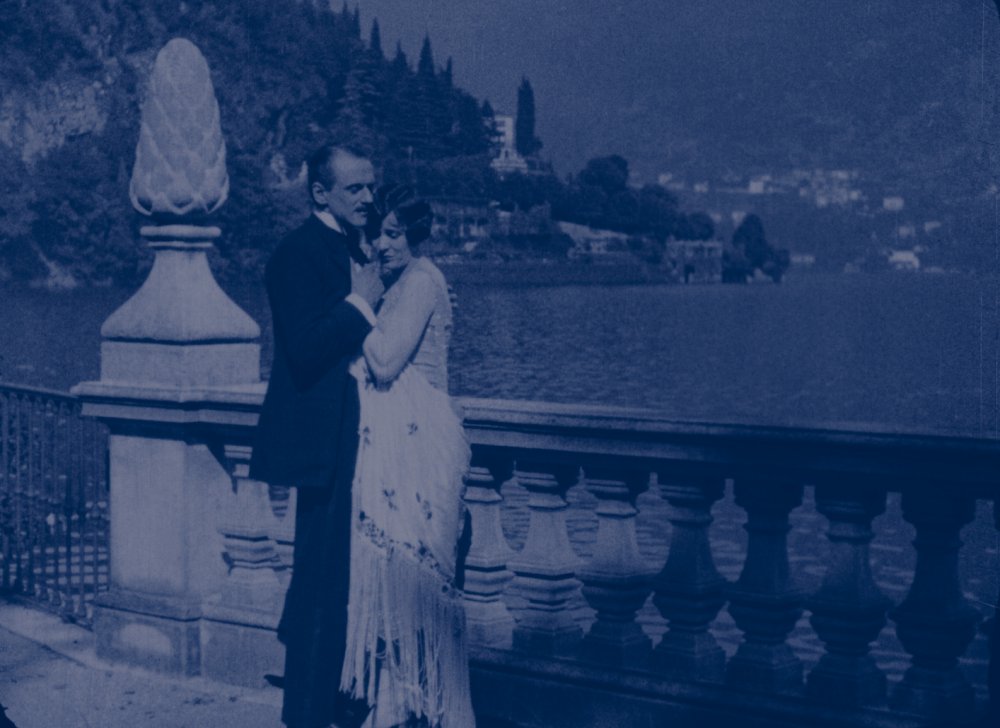 Once back in Munich things improved although Hitch still found his leading ladies to be ‘quite a handful’. It’s not surprising that he didn’t find much time to write home. Hitchcock tells Brunel that all he’s seen of Munich has been his hotel room and the studio, admitting that ‘I haven’t written my own mother but twice since I have been away’. Quite an admission for the dutiful son!

But ever the film fan, Hitch does find time to ask Brunel about movies. He enquires about the editing of The Prude’s Fall (a film which Hitch worked on as assistant director) and asks if Brunel has seen any good films lately as he’s ‘interested to hear […] of any new developments in screen art’.

Despite Hitchcock’s problems, The Pleasure Garden is a remarkably assured film and contains many themes and motifs that would come to characterise his later work. The BFI National Archive’s brand new restoration of the film will be shown at Wilton’s Music Hall on 27 and 28 June, with a newly-commissioned live score by Daniel Patrick Cohen.

This letter can be seen on display at BFI Southbank until 2 September 2012 and is reproduced courtesy of the Estate of Alfred Hitchcock.