Hitchcock vs the beatboxer

The restoration premiere of Hitchcock’s little-known silent film Downhill – a story of guilt and dishonour in a public school – was accompanied by a score from beatboxer Shlomo. Maggi Hurt is spellbound. 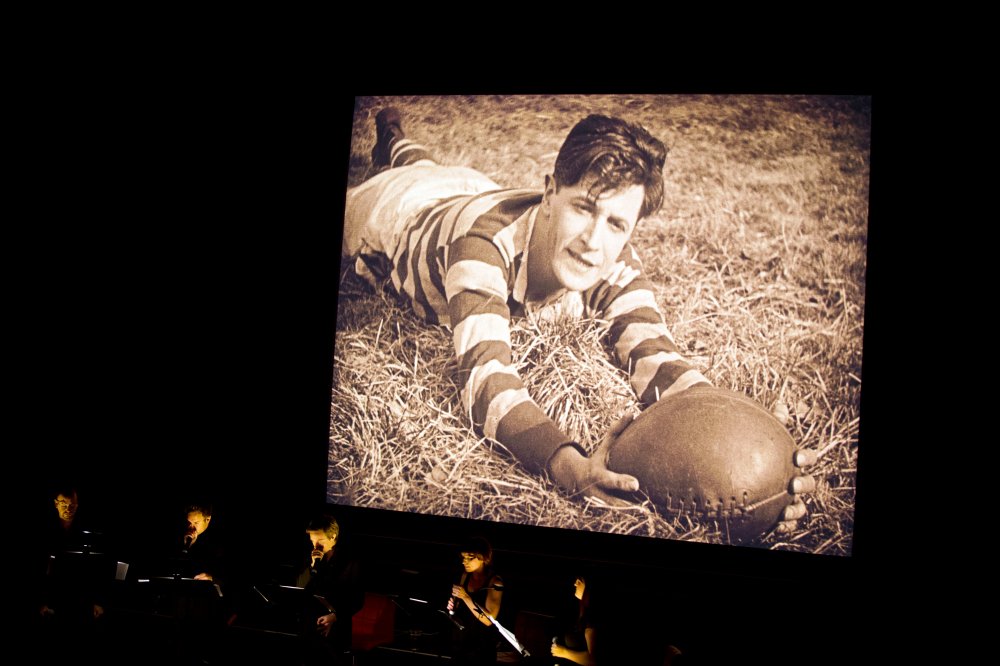 Waiting outside the theatre for the doors to open… expectation in the air. Most people wouldn’t have seen Downhill (1927) before. I hadn’t. It’s one of those early Hitchcock films that has a mixed reputation. Not as good as The Lodger (1926), they say. But there’s Ivor Novello in the leading role again, so it was surely worth trying. In fact, the reputation stems largely from viewings many years ago, as there hasn’t been a decent print in circulation for ages. Times and sensibilities change… what will it say to us in September 2012?

But most of the audience waiting in the foyer probably weren’t wondering if they were going to rediscover a lost masterpiece. They were looking forward to a beatboxing experience. The legendary Shlomo had been commissioned to write a new score for this, one of the Hitchcock 9 – the newly restored versions of the director’s nine surviving silent films. He’s wowed audiences around the world and we were about to see what he would do for this little-known Hitchcock film.

After we were seated, Robin Baker, Head Curator at the BFI National Archive, set the scene for us. Apparently this restoration had been possible by working on a print that was in our archive along with one found in Holland. It’s hard to make a restoration working only from prints, not negatives.

Amazingly the prints that had survived were with their original tints, so we were about to see the work almost exactly as audiences had done in 1927. The big difference was we were going to hear the first ever beatbox soundtrack. I don’t think even the forward-thinking Alfred Hitchcock would have imagined that! 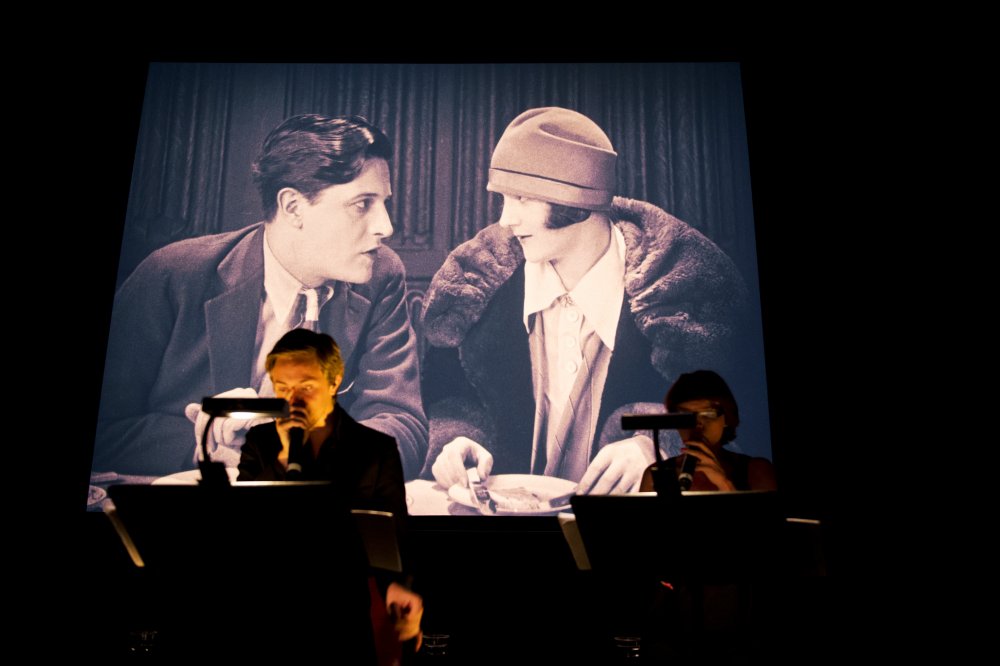 Finally the moment arrived – the vocalists arrived in front of us. Five performers. Shlomo came with them and was seated in the audience just in front of us. The curtains opened, images played on the screen and an orchestra started to perform. An orchestra? The sounds resonated around the auditorium. Were there a dozen performers? No still only five, but the diversity of sound suggested otherwise.

As someone who can’t sing, I’ve always marvelled at how people can precisely control the pitch of their voices. Here were performers who were so completely in control of such a range of sound, I was open-mouthed at times. I’m sure I wasn’t the only one: the audience was completely wrapped in the performance – it gave context to the images, creating a soundscape that drew us into the narrative and accentuated the pace.

In the opening scenes the refectory of a boys’ school fills with pupils, staff and parents after an exciting sporting victory. While parents and masters celebrate with utmost decorum, youthful ardour smoulders. The vocalists wove an atmosphere of exuberance and expectation, punctuated with raised eyebrows and furtive looks, adding an extra dimension to Hitchcock’s narrative.

As the young friends began their adventures, the score subtly picked out their emotions. A record went on the turntable and we heard the music… and the crackle and hiss. Occasionally songs became part of the multi-layered sound environment, often carrying forward the inner drama of Novello’s character, cheated of his early promise by a cruel twist of fate (and his moral rectitude). 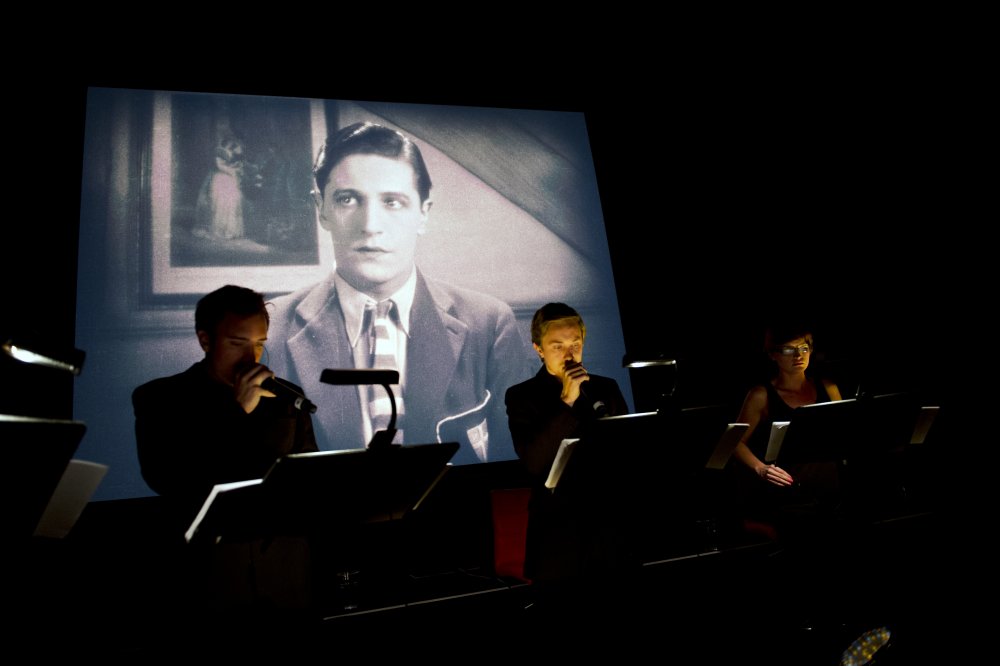 Downhill isn’t Hitchcock’s hidden masterpiece. It is an early and possibly opportunist work. However the new restoration is genuinely valuable, allowing us to see the development of his talent and capture some real 1920s atmosphere, replete with tinted scenes.

Polished but inherently raw, the voice tapestry of beatbox really presented something fresh for an audience that was up for a challenge, stepping out of the safety net of traditional composition and offering an opportunity to some that might otherwise never consider silent cinema their thing.

My 14-year-old son was impressed by a beatboxer earlier this summer who could replicate (rather than imitate) the sound of a chainsaw and falling tree. Although Shlomo’s Downhill score didn’t offer similar ‘trickery’, it amazed my son with its energy and sustained his interest through the film, carrying him over the slower passages and social references that are hard to decode for 21st century audiences.

I left the auditorium with a burning question: how on earth do you write a score like that? I’d love to see the annotation. The books were huge. It can’t be in conventional notes surely? Perhaps it should remain a mystery – the sound was extraordinary and some things are best left unexplained.