That Ealing poster: Hue and Cry

The memorable posters for Ealing’s comedies were commissioned from some of most talented illustrators of the time. Curator Nathalie Morris picks out a favourite. 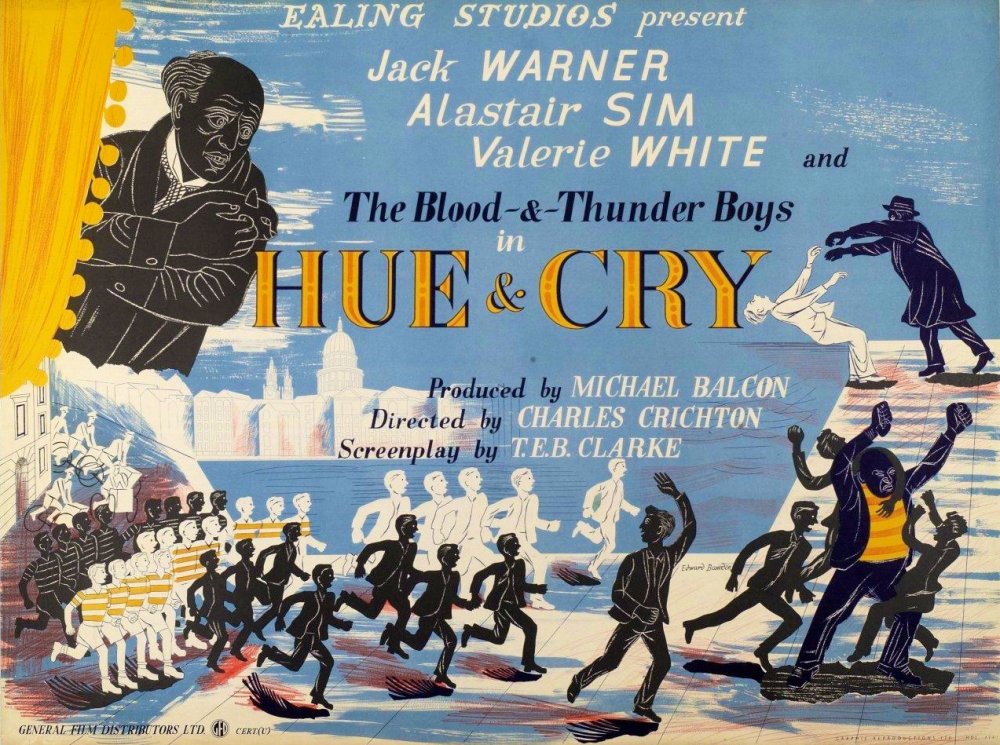 The posters for Ealing Studios’ films – and especially the comedies – are probably as well known as the films themselves. Some of the most striking examples of British poster design, let alone film poster design, emanated from the studio during the 1940s and 50s, and the BFI National Archive is fortunate to hold a large number of these within its Special Collections.

It was a direction instigated by studio head Michael Balcon and publicity chief Monja Danischewsky, and ably guided by S. John Woods, himself a talented artist who designed (or co-designed) several Ealing posters, including those for Cage of Gold (1950) and The Man in the White Suit (1951). Woods carefully selected artists whose style he felt would complement particular films, and he worked with them to produce distinctive, if often wilfully uncommercial, results. 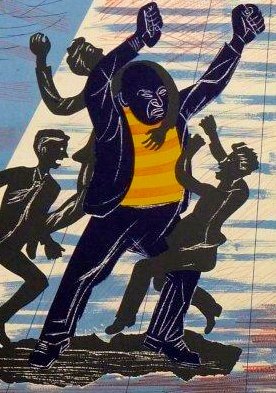 It’s very hard to select a favourite Ealing poster (I have at least 20 ‘favourites’), but the one I’ve picked is Edward Bawden’s design for Hue and Cry. Bawden (1903-1989) was a painter, illustrator and graphic designer who produced work for the Curwen Press, Shell, London Transport and Fortnum & Mason amongst many others. The style of his work is quirky, witty, quintessentially English and perfectly suited to the type of films that Ealing is best known for.

Hue and Cry is the first of Ealing’s post-war comedies and tells the story of a gang of boys who take matters into their own hands when they discover that crooks are communicating with each other in code via a comic strip. Penned by T.E.B. ‘Tibby’ Clarke and directed by Charles Crichton, the film is generally thought of as the first true Ealing comedy, and Bawden’s poster perfectly captures its joyous anarchy and eccentricity.

One of the film’s most memorable scenes takes place on a riverside bombsite as the boys and their allies have a showdown with the crooks. Bawden takes this as the starting point for his poster and transplants the scene into an almost theatrical setting. The receding lines of the foreground suggest a stage and the image is framed by a heavy curtain, around which a vastly disproportionate Alastair Sim peers down like a puppet master manipulating his figures.

The poster is full of charming detail. In classic Bawden style, the shapes are flattened and the lines bold and simple. The lettering is all done by hand (Bawden was a master of hand-lettering) and draws on traditional folk styles. An iconic St Paul’s Cathedral sits serenely on the opposite side of the river while in the foreground a host of small black and white figures rush towards the (heavily outnumbered) crooks. A phalanx of ice cream sellers on bicycles bring up the rear and contribute to the sense of momentum that draws the eye from left to right.

The colour palette is restricted (most of Bawden’s lithographs use no more than five colours) but effective, with blue, black and white accented with vivid shots of red and yellow. In the bottom right-hand corner a large man in a stripy red and yellow jumper is vigorously set upon by three boys, and this flash of strong colour is neatly balanced out by the bobbled curtain on the top left.

S. John Woods gave Bawden a completely free hand. He was sent still photographs but didn’t visit the set or see the completed film before designing the poster. Bawden later wondered if he should have been given more guidance, but I don’t think so. The poster manages to be quintessentially Bawden-esque while also conveying something of the film and the moment at which it was made. Director Charles Crichton was delighted with the result, feeling it perfectly captured the atmosphere he was trying to create, and the pair were successfully matched again for 1953’s The Titfield Thunderbolt.