Ealing and the art of the film poster

With the release of Pink String and Sealing Wax on Blu-ray and DVD, we celebrate the innovative graphic art of a studio that commissioned some of the most memorable film posters of their time. 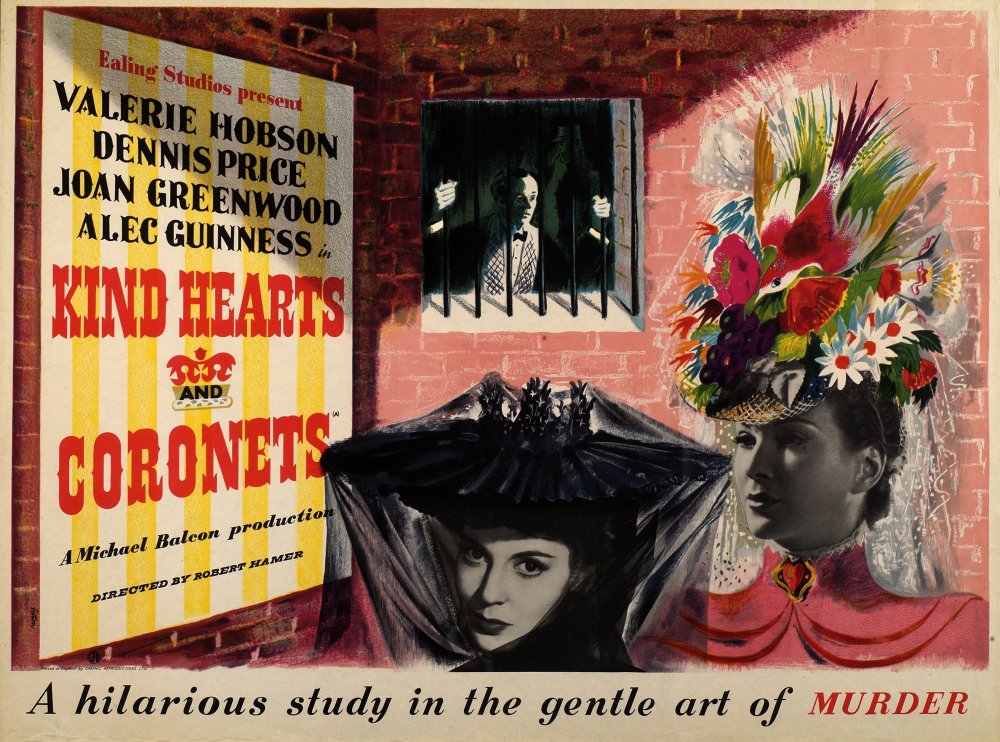 Pink String and Sealing Wax is now available in fully restored 2K for the first time on Blu-ray and DVD. The restoration was funded by STUDIOCANAL in collaboration with the BFI’s Unlocking Film Heritage programme.

Ealing’s posters are some of the most striking and recognisable in the history of British film. Often disregarding the film poster’s commitment to narrative and genre, and sidestepping its obligations to stars and credits (sometimes to the dismay of Ealing’s distributors, the Rank Organisation), the studio’s advertising department played host to a series of artists, designers and illustrators. Many of these would question established practice to push film posters in a new direction.

Ealing’s advertising department was headed up by S. John Woods, who trained as an artist and graphic designer, before working in a variety of advertising roles, including a stint at Twentieth Century Fox in the 1930s. In 1943, he joined Ealing to help realise the vision of the studio’s chief publicist, Monja Danischewsky.

Unusually for a designer working in film advertising, Woods wasn’t afraid to bring politics into the equation. Throughout the 1930s he moved in artistic circles that included Ben Nicholson, Henry Moore and Barbara Hepworth, soaking up the energy and fervour of the interwar generation, cultivating a love of British abstract and surrealist art and actively contributing to exhibitions and articles challenging the established order.

Many of the artists that Woods employed at Ealing, including James Fitton and James Boswell, explored the way in which art could project their political affiliations. Fitton and Boswell were founding members of the left-wing Artists’ International Association. Boswell had made his name during the 1930s as a political cartoonist for the Left Review, and together with Fitton he was credited with reviving a long-standing tradition of British political satire that stretched back to the 18th century. 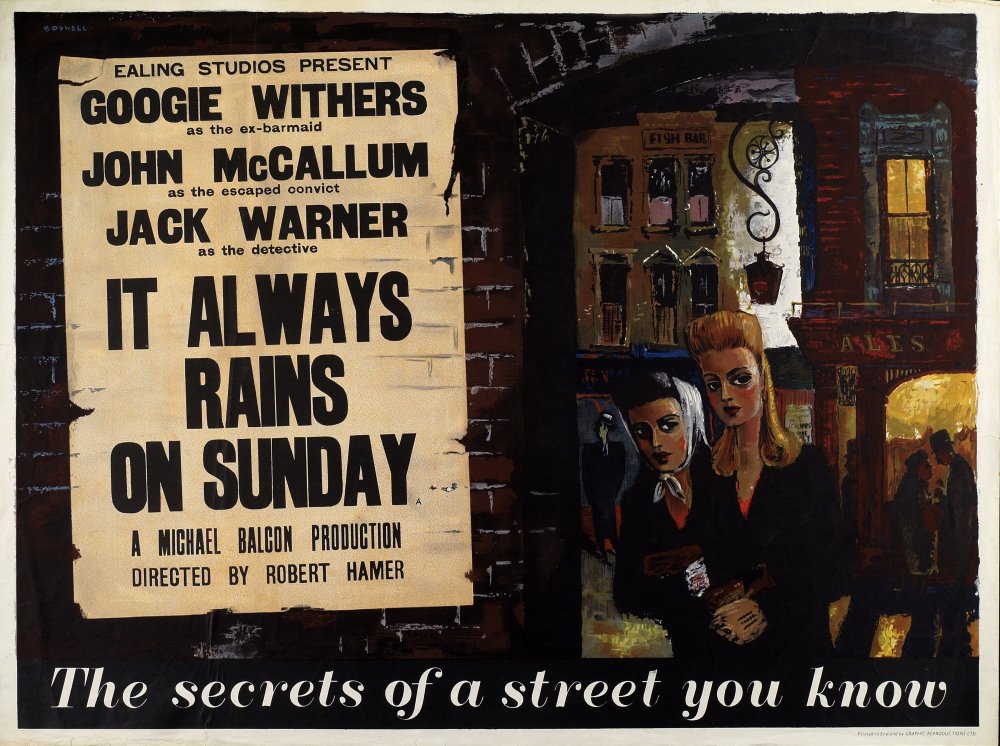 Boswell’s posters are not overtly political statements in and of themselves, but they’re infused with an air of social realism. His imagery is typically dark and dense, inspired by his walks through London by night.

The poster for It Always Rains on Sunday (1947) captures the frank, emotional heart of the film. The city takes on an unnerving but defining role, with crumbling arches, twisted street lamps and sinister shadows, while its inhabitants stand huddled together with dark, heavy eyes.

Boswell experimented with torn paper to create the placard (which he then hand lettered), representing through materials the torn relations that occupy the film.

Elsewhere, Woods looked to artists who had an affinity with Britain’s rich folkloric tradition. Pink String and Sealing Wax (1945) is set against the backdrop of Victorian Brighton, and for the poster, John Piper was asked to create his own, unique vision of the seaside town. 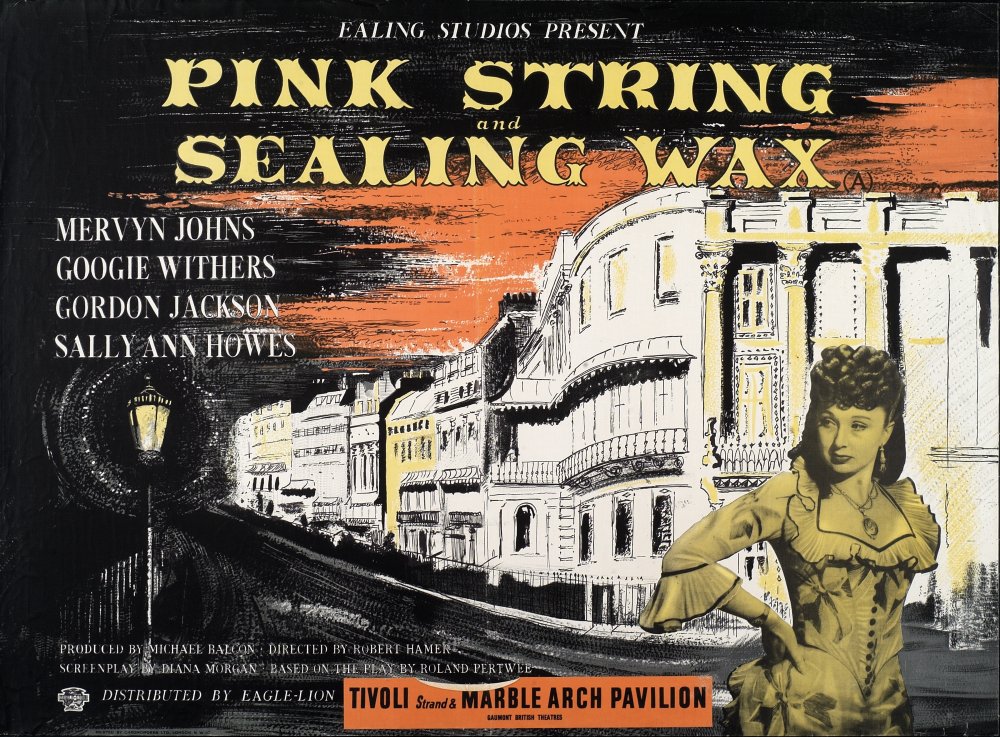 Piper was a keen chronicler, and since childhood he had been fascinated by the ghosts of Britain’s architectural and typographic past, delighting in everything from medieval churches to Victorian shop fronts. He spent the war years travelling the length and breadth of Britain as a war artist, attempting to record its buildings before they were lost to bomb damage or modernisation.

Already well known for his architectural drawings, he had also completed a series of aquatint prints of Brighton for a limited edition publication in 1939. These same sketches inspired the use of sweeping Regency architecture that dominates the poster, lending a distinct air of authenticity, while also placing it in dialogue with Piper’s wider body of work.

The melodramatic nature of the film – a tale of romance and murder in late Victorian Brighton – is expressed through the ornate typeface chosen for the title. In a world dominated by the utilitarian typefaces of wartime propaganda, it nods to the diversity and eccentricity of 19th-century lettering; something that Ealing would repeat in later posters, including Fitton’s artwork for Kind Hearts and Coronets (1949).

Piper’s pink skyline evokes the sunset world of Victorian England. The burnished hues are also reminiscent of Piper’s earlier wartime sketches, which were replete with smouldering ruins. Much like the image of Googie Withers, Piper’s poster is one that looks knowingly over its shoulder to the past, but is unable to leave behind the gentle bite of present-day reality.

Related to Ealing and the art of the film poster