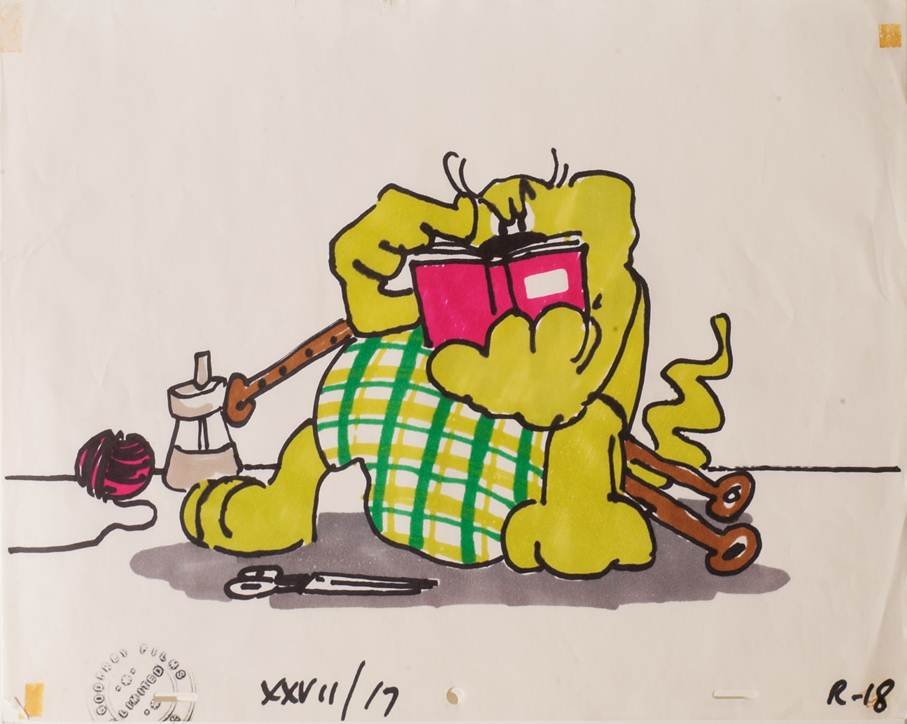 Some news just comes like a punch in the gut. Bob Godfrey has become such an important figure for me that news of his passing is just deeply, deeply sad, despite knowing he had been ill for some time. It’s difficult to state how important a figure Bob was in the development of British animation. When his career really took off in the 1950s he was more than a breath of fresh air, he was the kick up the backside that the industry sorely needed. 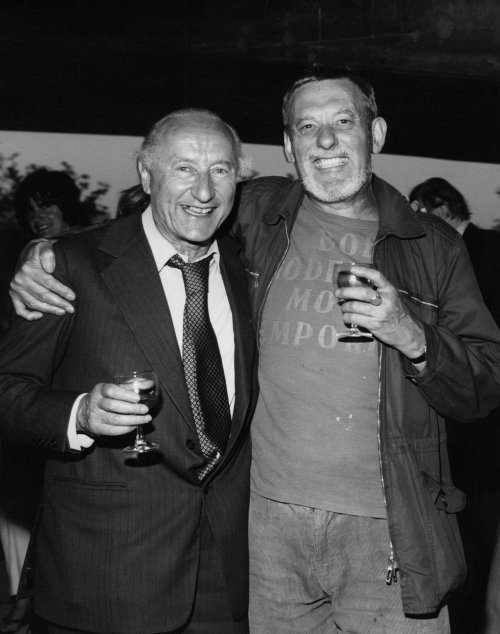 Like most people, my first encounter with Bob’s work was through his children’s television series. Yes, I enjoyed Roobarb (1974), with its boiling lines and colours, caustic intro music, and great voiceover by Richard Briers, who died in the same week as Bob; but this was a little before my time. For me, Henry’s Cat (1980-91) was the thing. This dreamy, yellow cat whose big imagination and ambition was usually foiled by his bigger stomach and need for sleep, really spoke to me.

Watching old episodes now, I don’t mind the limited animation as it certainly didn’t matter as a child, and I know that the BBC paid peanuts to make such content. Today the expressions of the characters beaming out of such simple designs really stand out, especially on Henry’s Cat’s friend Chris Rabbit, a particular favourite of mine. I also now know that it was long-term collaborator Stan Hayward who came up with the characters and stories and is a massive part of its success. But I think the primary reason I loved the series then, and now, is that all the characters have Bob’s own unique voice, as he provided all the narration, and there is nothing else quite like it.

Bob was born Roland Frederick Godfrey in Australia in 1921, but his British parents came back to London while he was still a baby, and he grew up in Ilford, later attending Leyton Art School. Before the war he was employed at the Lintas advertising agency, and returned there for a short period after. It must have been his desire to move into animation that led to his next job, painting merchandising products for a series of cartoons made by the short-lived Gaumont-British Animation studio. He then got a job closer to the action at Larkins Studio, who produced a series of animated sponsored films in the early 1950s that pushed the boundaries of modern graphic design, under the guidance of Peter Sachs. In an obituary that Bob wrote for Sachs in 1990 he shared an anecdote that was telling about both men:

When I went for a job, he asked me what I knew about film-making. “Absolutely nothing,” I replied with uncharacteristic modesty. “Good, you can start on Monday,” he replied.

But Bob was still not animating, and was only allowed to work on painting backgrounds. Another favourite anecdote was that he only became interested in animation when he noticed that other people’s drawings were being placed on top of his own. This is belied by a series of drawings and accompanying text that he produced for an in-house magazine in December 1950 under the title ‘I’m still an outsider!’, which reveal how fascinated he was by the process of making figures move. 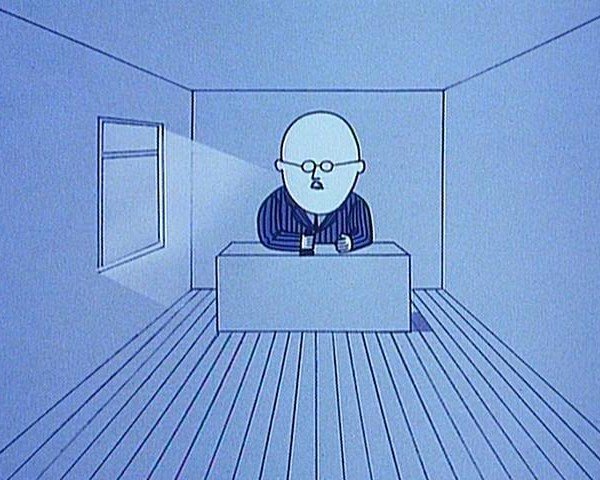 Ultimately he had to make his first films The Big Parade (1952) and Watch the Birdie (1954) in his spare time with other young colleagues from Larkins. One of these was Keith Learner, who had a technical wizardry that was vital when Bob left Larkins to set up Biographic Cartoons Ltd in 1955 with Learner and Jeff Hale. The date is significant as it coincided with the arrival of commercial television in Britain, when advertisers and their agencies were scrabbling around to find producers for this new, suspicious-looking beast – the television commercial.

Biographic produced one of the 20 commercials on the prestigious opening night of ITV, and quickly became renowned for their unique humour and visual style, attracting some of the biggest clients. They also began producing animated sequences for television programmes, such as Dick Lester’s Son of Fred featuring Spike Milligan and Peter Sellers. This is despite the fact that their technical set-up consisted of a hand-cranked 1909 Moy & Bastie camera attached to a table with a hole in it, which was fixed on top of another table that held their artwork. Jeff Hale left the company to join the National Film Board of Canada, and two other Larkins alumni, Vera Linnecar and Nancy Hanna, joined Biographic in 1957 at new bigger premises in Dean Street, Soho.

Bob later described the period of 1955 to 1965 as a golden age for British animation, but he also said that commercial work – particularly ads – “shattered the dream” of animation as a pure art form that had been building. Personally I would go with the former opinion, as the ad money bankrolled a series of independent short films from Biographic, and other contemporary studios, that pushed the boundaries of animation through progressive yet witty design. Bob’s early films, such as Polygamous Polonius (1958), Alf, Bill & Fred (1964) and The Rise and Fall of Emily Sprod (1964) are all as joyful and eclectic as their names suggest. 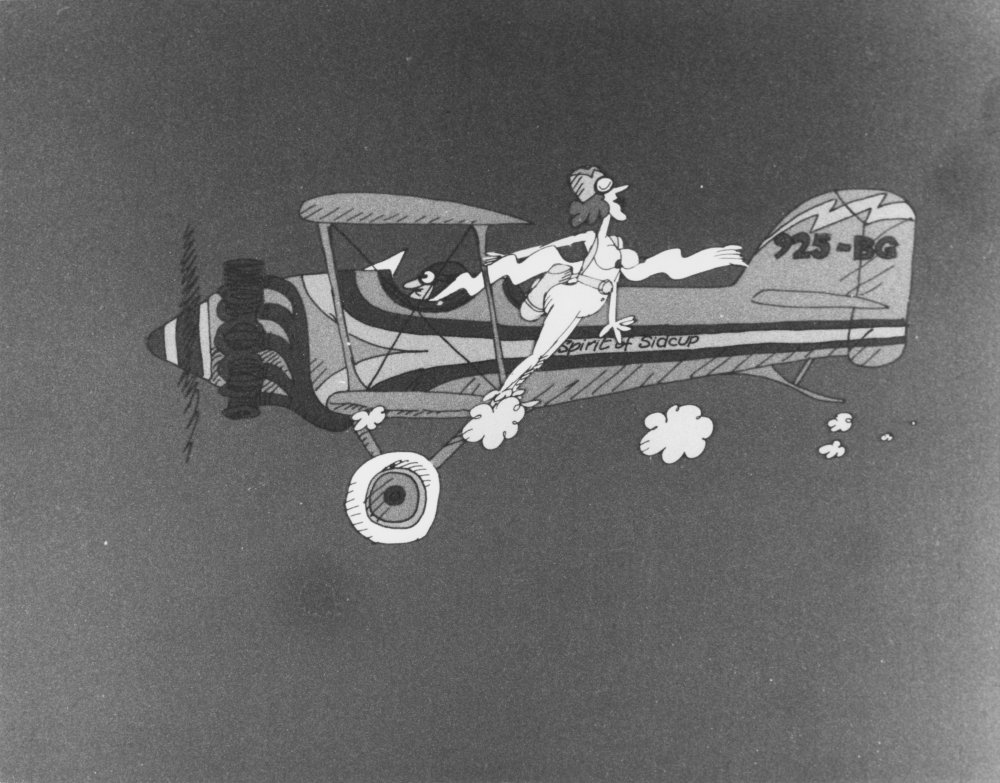 The four Biographic partners split their profits to each make their own independent short films under the names Biographic 1, 2, 3 and 4, with Bob’s Biographic 4 by far the most prolific. He also made a series of short live-action films that exhibited a kind of post-modern slapstick, and often featured performance artist Bruce Lacey.

But perhaps the best film from the Biographic period was the six-minute Do It Yourself Cartoon Kit (1959), which the four partners collaboratively cobbled together over a long weekend, based on a Colin Pearson script, with narration by Michael Bentine. It represents the essence of the Godfrey spirit – irreverent, eclectic, even amateur to a certain extent, and yet an undeniable work of art, that still has audiences laughing out loud throughout.

In 1965 Bob decided to leave Biographic as he felt he needed to be in complete creative control, and he set up Bob Godfrey Films, also later known as Bob Godfrey’s Movie Emporium. The decision unfortunately coincided with a general drop in advertising work for the animation industry as a whole, but Bob plugged away releasing shorts of increasing sophistication, with scripts and story ideas usually provided by Stan Hayward.

1970 saw the first of Stan and Bob’s ‘sex films’ in Henry 9 ‘til 5, where an office worker sought relief from the daily grind through an active fantasy life, ignoring his beautiful wife at home. Rather than prurient, the films poke and prod at British attitudes to sex – particularly male attitudes. 1971’s Kama Sutra Rides Again, featuring a couple’s increasingly complex and ultimately destructive search for variety in their sex life (again driven by a little bald man in glasses) proved to be Bob’s biggest (perhaps only) financial success after it was personally selected by Stanley Kubrick to accompany A Clockwork Orange (1971) in the cinema. 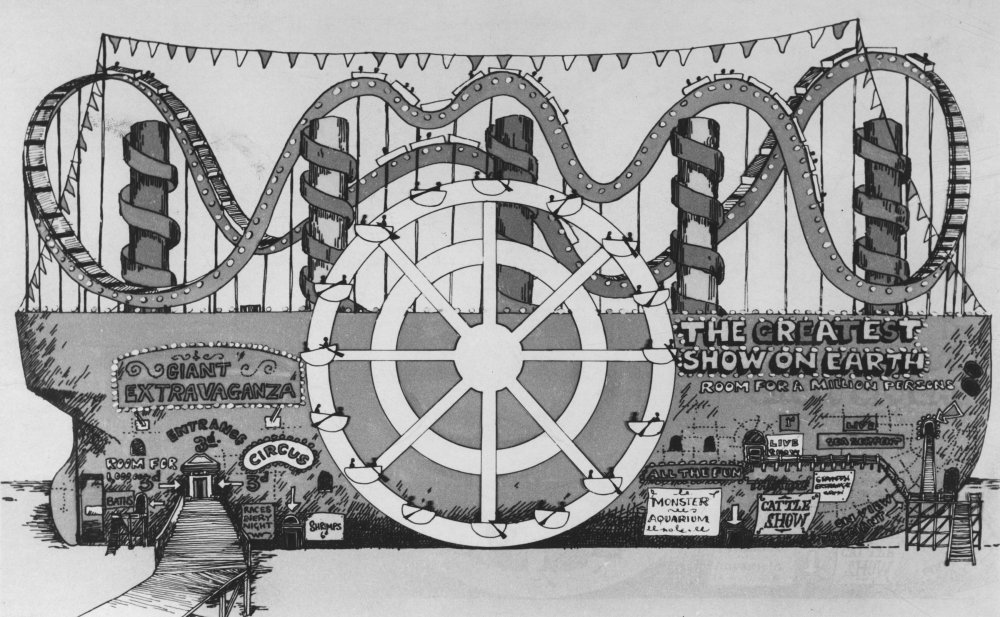 Roobarb hit the screens in 1974, but Bob’s real efforts went into Great a 30-minute comic-opera biography of Isambard Kingdom Brunel, which was finished after a great financial effort and ‘released’ in 1975. It’s running time – too long for a short, and too short for a feature – meant that it was barely seen in cinemas, but it did qualify for the Academy Award for Best Short Animation and Bob became the first British animator to win an Oscar. The achievement is certainly not lessened by the fact that celebrations back at the studio led to the statue having a distinct lilt after it was dropped a few times.

Teaching became increasingly important for Bob, at the West Surrey College of Art (now UCA Farnham) and later the Royal College of Art, but also through a five-part BBC series called The Do-it-yourself Film Animation Show. Bob presents the series in a surprisingly serious yet warm fashion, and different episodes feature Terry Gilliam and Richard Williams as guests, in what surely must have been a huge inspiration to many animators who later blossomed under the enlightened sponsorship of Channel 4 in the 1980s and 90s.

Bob tried and failed to get an animated feature off the ground under the title Jumbo, but continued to release short films that made him a welcome and popular feature of the international animation festival circuit. Dream Doll (1979) was a collaboration with the Croatian animator Zlatko Grgic, depicting a love-affair between a lonely man and a blow-up doll, which is actually very sweet and romantic, and a marked contrast to Instant Sex (1980) – in which a man attempts to monopolise the supply of canned orgasms – and Bob’s self-proclaimed misogynist film Biowoman (1981). In a press release for a 1985 Guardian Lecture at the National Film Theatre he was perhaps self-billed as “supreme animator, clown, voice-artist and ex-misogynist”. 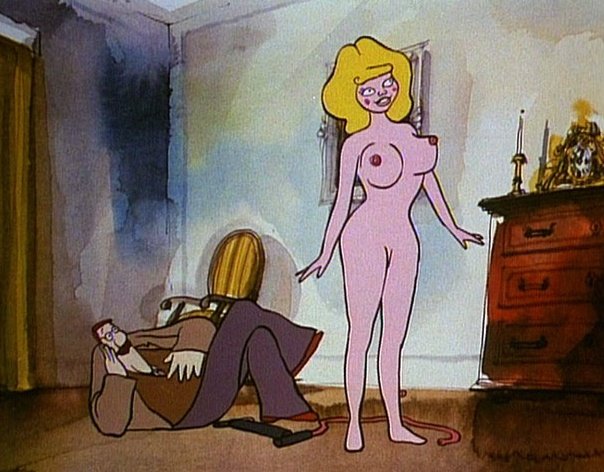 Amid work on Henry’s Cat, Bob also collaborated with Guardian political cartoonist Steve Bell, on a series of films that reveal some of Bob’s politics. Send in the Clowns (1989) gave a satirical look at the presidency of Ronald Reagan, and the four-part Margaret Thatcher Where Am I Now? series from 1999 successfully brought Bell’s visions to life.

In 1994, John Halas (perhaps the only man more important to British animation of the 20th century than Bob and a long-term friend and collaborator) commissioned him to produce a portrait of Great Britain for a series of cartoons called Know Your Europeans. It is one of Bob’s best films, carried by a Gilbert and Sullivan-esque song by Colin Pearson (again), and its caricatures of Prince Charles, Roger Moore, and the Great British public.

Millenium The Musical offered a view of 1000 years of British history on New Year’s Eve in 1999, and Will’s World (2000) imagined how Prince William would celebrate his 18th birthday. The studio also produced another children’s series, Kevin Saves the World, based on the stories of Daniel Postgate – son of Oliver. However Bob was now in his 80s and the studio eventually came to a close. The collection of artwork and films remaining in the studio was passed on to the Animation Research Centre at UCA Farnham, where Bob had close links through his teaching.

The paper material remains there, but in 2011 Bob’s family passed the film material into the care of the BFI National Archive, where I have the great pleasure of accessioning and cataloguing the material. In looking at the films, and researching the context in which they were made, I realise even more what a remarkable, unique and important figure he was. My thoughts are with his family, who will miss him terribly. The world is a lesser place without him.