Lost in space with Gravity, in time with Computer Chess, at sea with Leviathan and in love with Blue is the Warmest Colour. In print and digital from 1 November. 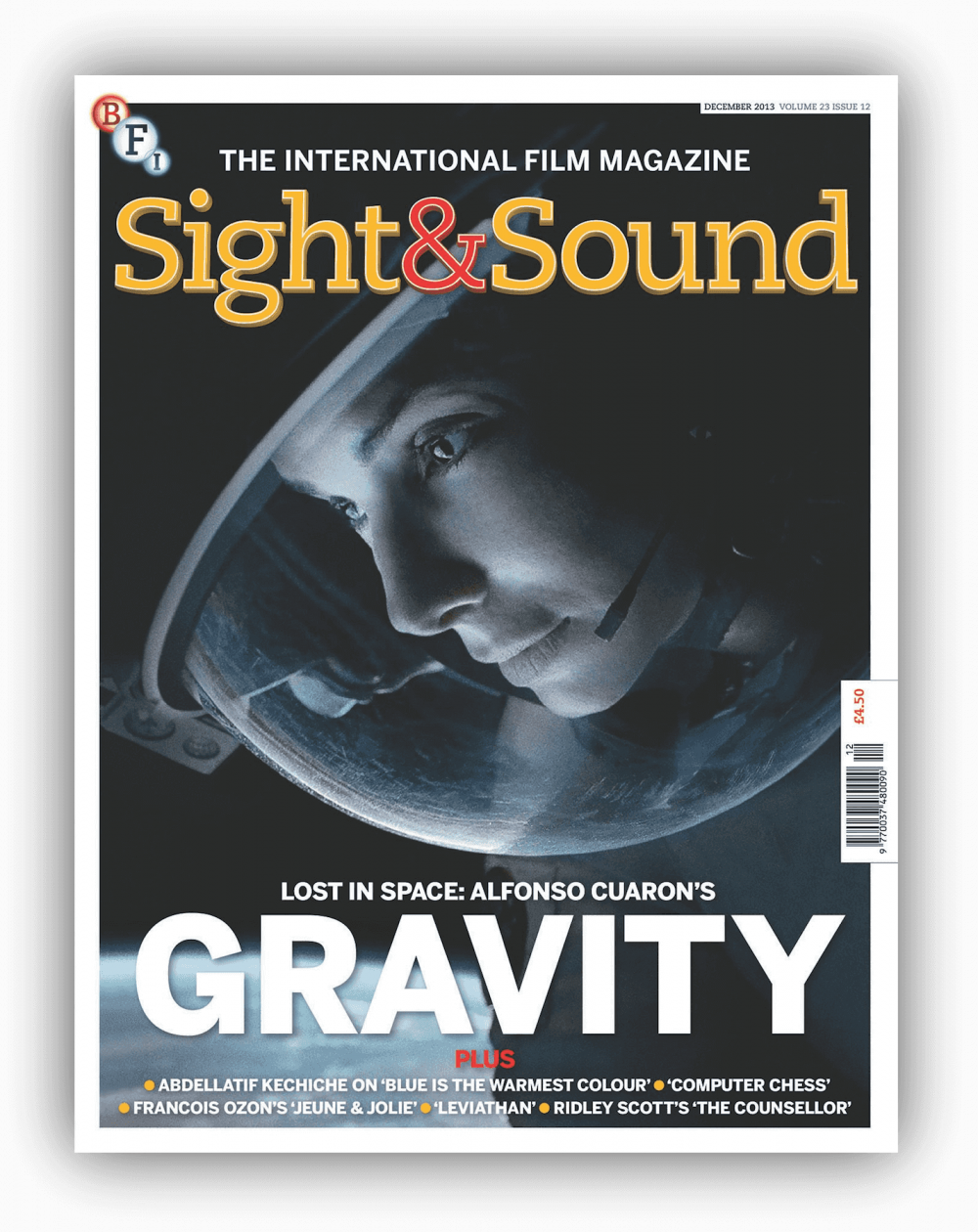 This month’s issue boldly goes into outer space as our cover feature explores the immersive 3D technical marvel that is Alfonso Cuarón’s Gravity.

Roger Luckhurst considers the film, and looks back at the ways in which earlier films have depicted the experience of being in space. “There has always been a strange interplay between the American military-industrial complex and science-fiction cinema”, he writes, drawing on movies from Destination Moon in 1950 through Star Wars, Capricorn One, 2001: A Space Odyssey, Dark Star and Apollo 13, and argues that the fantasies of science-fiction cinema and the realities of mankind’s ventures beyond the Earth’s atmosphere have never been too far apart.

Gravity captures the sensation of actually being in zero-gravity orbit around the Earth with a verisimilitude like no film before it, largely due to the technical innovations developed during production. Director Alfonso Cuarón and visual effects supervisor Tim Webber discuss the film’s production, and cinematographer Emmanuel Lubezki’s eureka! moment at a Peter Gabriel concert.

Technical innovations also made possible the remarkably immersive Leviathan, an abstract nonfiction portrait of industrial fishing off the coast of New Bedford, Massachusetts. The film’s directors Lucien Castaing-Taylor and Verena Paravel tell Trevor Johnston how their work attempts to avoid the point of view imposed by conventional documentary in favour of a more direct experience.

Technology of a different, more antiquated kind is crucial to Andrew Bujalski’s early-80s set Computer Chess, shot on the video technology of the time. Is this return to analogue a symptom of nostalgia, asks Calum Marsh, or something more forward-looking and exciting?

In a very different vein is Abdellatif Kechiche’s Palme d’Or winner Blue is the Warmest Colour, a three-hour long story about a love affair between two young French women which rests on the more traditional virtues of script and performances, but pushes both to great depths through long takes and a relentless search for realism. The film’s explicit sex scenes have been a particular cause for controversy, with some seeing a male perspective. But as Kechiche tells Jonathan Romney: “I find [that criticism] really empty. We’re talking about love – it’s absolute, it’s cosmic.”

The sex life of a young French woman is also at the heart of François Ozon’s coolly provocative new coming-of-age new film Jeune & jolie. The director tells Nick Roddick how he wanted to capture a different vision of adolescence to that seen in most other French dramas.

Elsewhere, Peter Hames writes on the Polish director Agnieszka Holland’s new project Burning Bush, a series for HBO which examines the reality of ‘normalisation’ – the repression that followed the Prague Spring.

Also in this month: Nick Pinkerton on the great romantic and professional partnership between Roberto Rossellini and Ingrid Bergman, Ben Walters on the freakish imagery, local concerns and universal emotion in the work of Portuguese director João Pedro Rodrigues, Charles Gant on how Saving Mr. Banks was brought to the screen – and much, much more…

Cover feature: Space is the place

Alfonso Cuarón’s Gravity tries to depict the dangers of spaceflight realistically. But the fantasies of science-fiction cinema and the realities of mankind’s ventures beyond the atmosphere have never been too far apart. By Roger Luckhurst.

Plus: Leaving the earth behind

Czech and Slovak filmmakers have struggled to capture the reality of ‘normalisation’ – the repression that followed the Prague Spring. Now a Pole, Agnieszka Holland, has succeeded, with Burning Bush, a TV series that begins with the self-immolation of Jan Palach. By Peter Hames.

When it comes to 1980s period authenticity, Andrew Bujalski’s Computer Chess has got it taped, thanks to the magic of old-fashioned video technology: and Bujalski’s not alone. Is this return to analogue a symptom of nostalgia, a protest against digital – or something more? By Calum Marsh.

Abdellatif Kechiche’s Blue is the Warmest Colour has caused no small amount of controversy since winning the Palme d’Or in Cannes – not least because of a perceived male slant to its depiction of a lesbian love affair. But, says the director, you might as well tell him he has no right to film the life of an airline pilot because he can’t fly. By Jonathan Romney.

An abstract painting set to a musique concrète soundtrack, an ocean-going Le Sang des bêtes, a Moby-Dick for trawlermen – Leviathan is both a documentary about the fishing industry, and something far more rich and strange. By Trevor Johnston.

Plus: Realm of the sensory

Leviathan is the latest in a line of adventurous documentaries from Harvard’s Sensory Ethnography Lab that set out to experience the real world, not just talk about it. By Trevor Johnston.

In the frame: The haunting of Deborah

A new exhibition at BFI Southbank explores the style and sensibility of The Innocents, one of the eeriest and most beautiful gothic films. By Nathalie Morris.

Masculine, feminine, a blue-collar art form and a rich man’s plaything – a humble bowling ball can be the whole world. By Hannah McGill.

Blue Is the Warmest Colour is only the most recent in a line of films that have tried to show the reality of lesbian relationships. By Salina Robertson.

The newest kid on the VoD block, the BFI Player, aims to add something fresh to the online video experience. By Catherine Bray.

Rediscovered footage from an early Welles film project, Too Much Johnson, may not be revelatory, but the director always springs surprises. By Richard Deming.

Dispatches: Not so grand inquisitors

Filmmakers and festival audiences are oppressed by the tyranny of the Q&A. Couldn’t they just, you know, talk to each other? By Mark Cousins.

The big problem with telling the story of P.L. Travers – the need for Disney’s cooperation – turned out to be no problem at all. By Charles Gant.

Brewster: Doing it for the kids

There’s broad agreement that supporting family films is a good thing: not so much about what counts as a family film. By Ben Roberts.

The Swedish producer has found international success by staying small and nurturing relationships with directors. By Geoffrey Macnab.

Venezuela triumphs in the Basque country. Plus marital war, anchovy war, How I Won the War, and sex, death and horses in Iceland. By Demetrios Matheou.

Soundings: the nature of death

How Southern gothic with a French accent became an American TV classic: you are entering The Twilight Zone. By Frances Morgan.

From a story by Robert Walser, a choreographer and a director have made a mesmerising piece of ‘perambulatory poetics’. By Sukhdev Sandhu.

As queer cinema starts to converge with the mainstream, the Queer Lisboa festival questions where the boundaries lie. By Ben Walters.

In 1947 Ingrid Bergman wrote a letter to Roberto Rossellini – and one of cinema’s great partnerships was born. By Nick Pinkerton.

Rediscovery: Riddles of the Sphinx

Memories, myths and radical politics all converge in a gloriously experimental film exploring the mystery of the Sphinx. By Charlie Fox.

In the 1970s, TV plays made headlines, and the one-off drama was the favoured form for tackling urgent social issues. By Mark Duguid.

Currently unavailable on DVD, The Boys is a ferocious family drama with a magnetic performance by David Wenham. By Austen Collings.

Nick Pinkerton on a life of Richard Pryor.

Kim Newman is mildly thrilled by a collection of essays on the 1930s horror movie.

Sukhdev Sandhu on UK film collectives of the 1970s.

Sympathy struggles with mockery in the abrupt, defeated conclusion of Horace Ové’s drama about Black Power in Britain. By Ashley Clark.