Michaela Coel, the face of British television today, talks about her game-changing series I May Destroy You.

Plus Ashley Clark on protest and activism in Black British Cinema; an oral history of the pioneering Black Film Bulletin; the cast and crew of Rocks; and Isaac Julien on Young Soul Rebels, in a classic 1991 interview from our archives.

Buy a print issue, get the digital edition or . 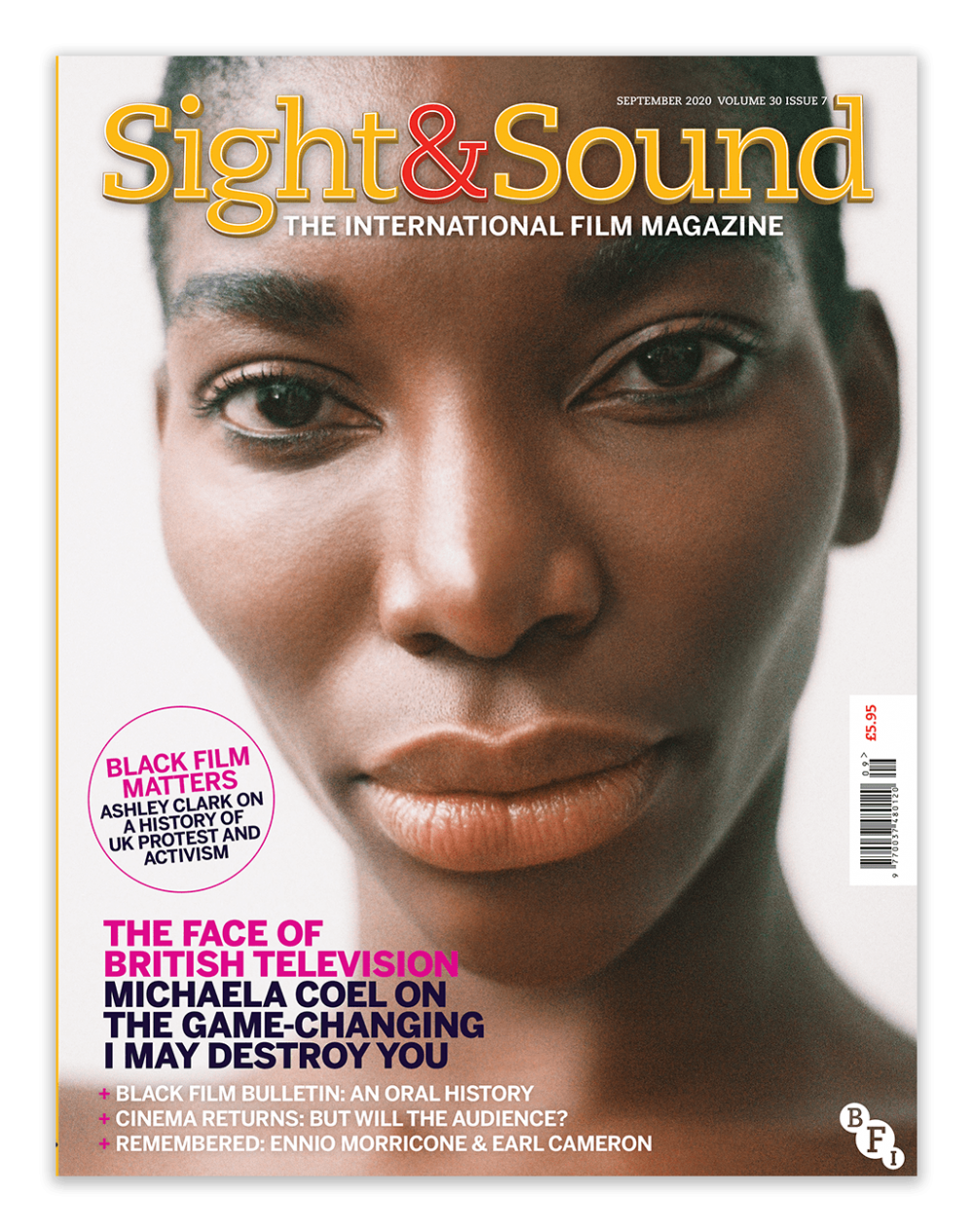 In our September issue, we sit down with Michaela Coel, the face of British television today, to talk about her game-changing series I May Destroy You, the daring, funny, shocking drama about abuse, consent and modern millennial life that’s been hailed as the television drama of the year. Coel tells Gaylene Gould about finding her ‘misfit’ voice and constructing the New World of TV.

Also in this issue: Ashley Clark explores the vital, too often suppressed history of protest and activism in Black British Cinema; the editors of the pioneering Black Film Bulletin talk us through the publication’s history and future; the female cast and crew of the London-set drama Rocks on how they told their own story their own way; and Isaac Julien talks to Amy Taubin about his breakthrough feature Young Soul Rebels in a classic 1991 interview drawn from our archives. Plus reviews of the latest films, TV series, Blu-rays, DVD and film books. 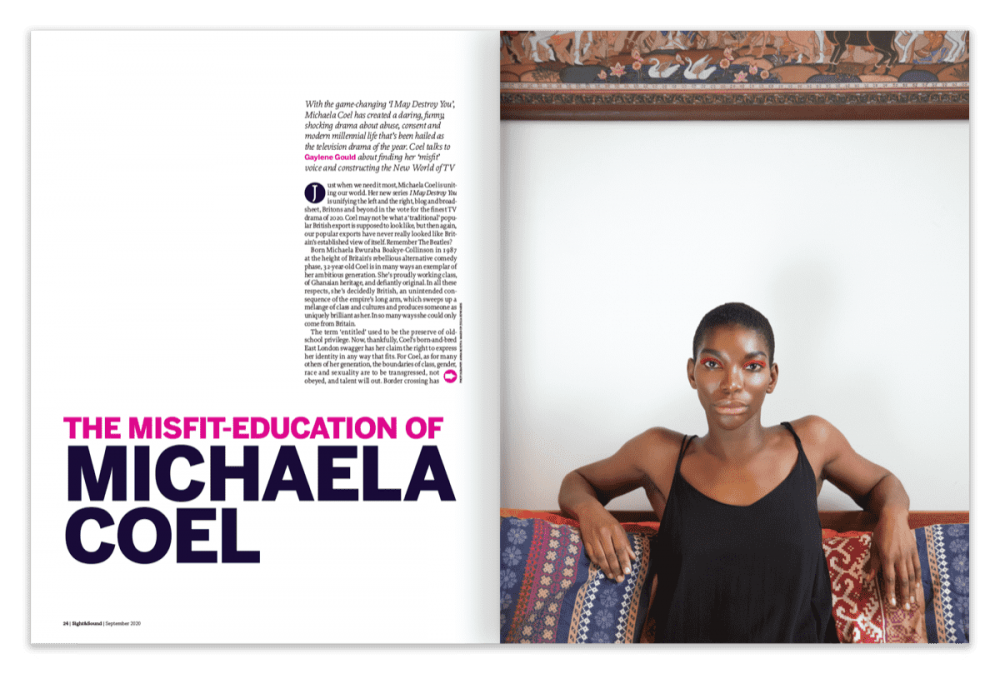 The Misfit-education of Michaela Coel

With the game-changing I May Destroy You, Michaela Coel has created a daring, funny, shocking drama about abuse, consent and modern millennial life that’s been hailed as the television drama of the year. Coel talks to Gaylene Gould about finding her ‘misfit’ voice and constructing the New World of TV. 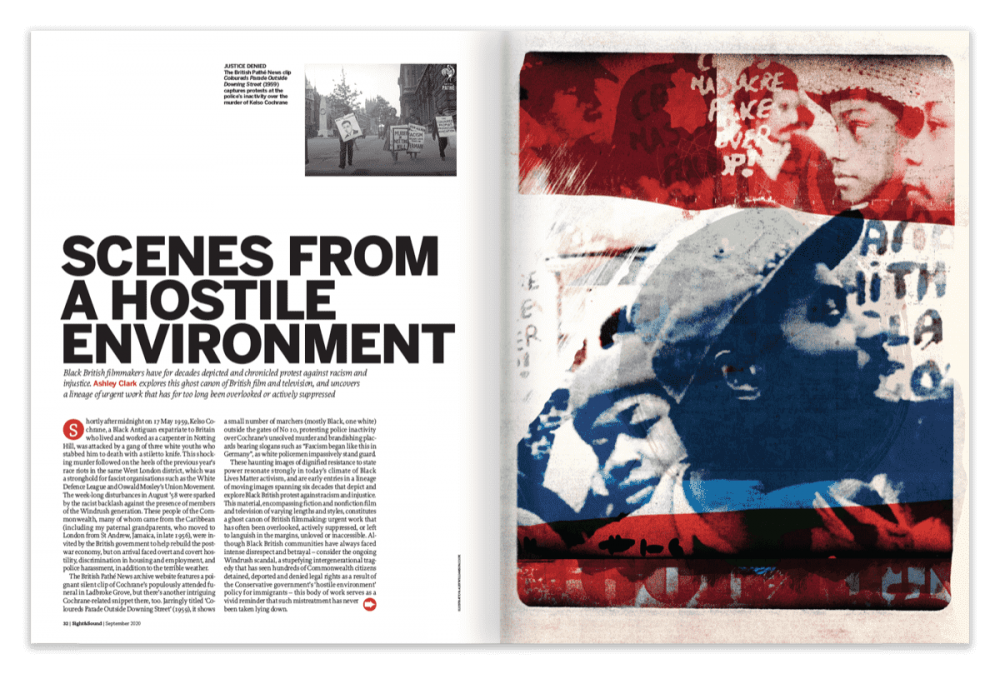 Black British filmmakers have for decades depicted and chronicled protest against racism and injustice. Ashley Clark explores this ghost canon of British film and television, and uncovers a lineage of urgent work that has for too long been overlooked or actively suppressed. 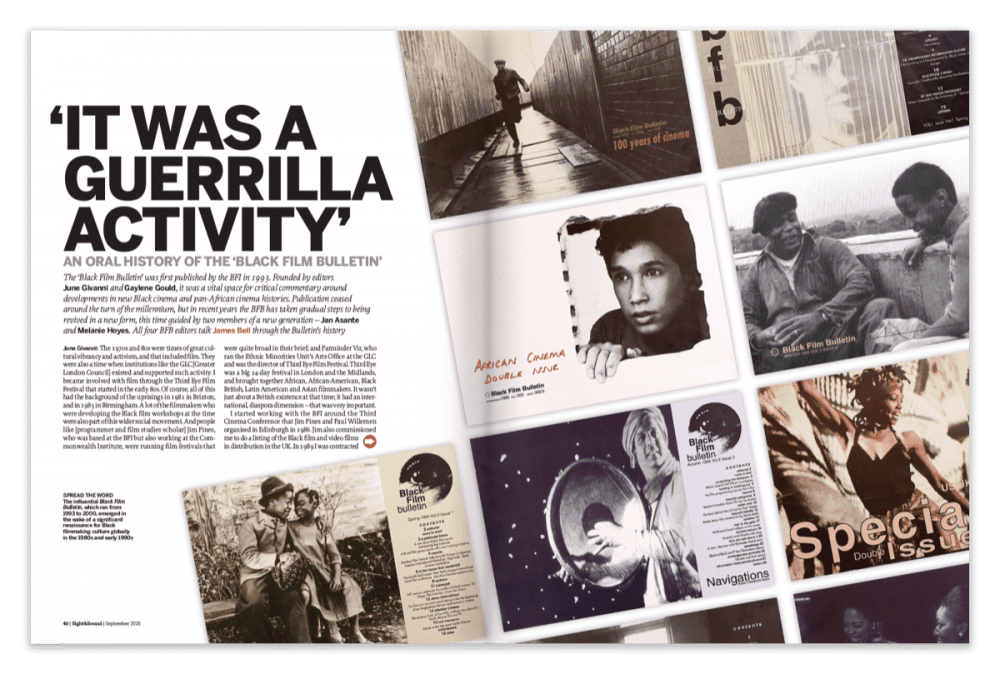 “It was a guerrilla activity”: an oral history of the Black Film Bulletin

The Black Film Bulletin was first published by the BFI in 1993. Founded by editors June Givanni and Gaylene Gould, it was a vital space for critical commentary around developments in new Black cinema and pan-African cinema histories. Publication ceased around the turn of the millennium, but in recent years the BFB has taken gradual steps to being revived in a new form, this time guided by two members of a new generation – Jan Asante and Melanie Hoyes. All four BFB editors talk James Bell through the Bulletin’s history. 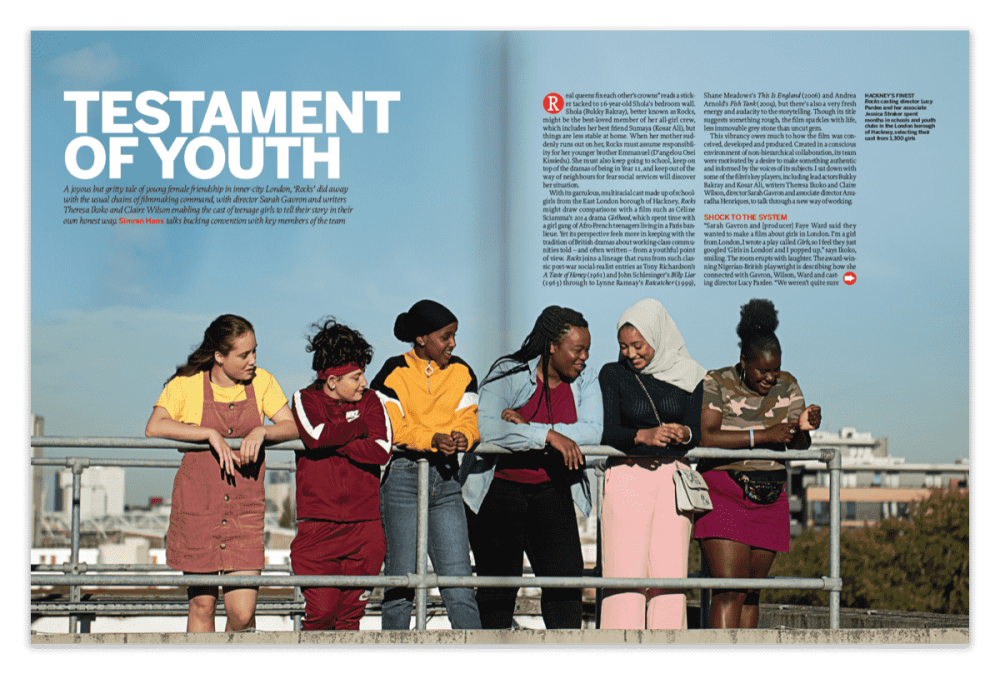 A joyous but gritty tale of young female friendship in inner-city London, Rocks did away with the usual chains of filmmaking command, with director Sarah Gavron and writers Theresa Ikoko and Claire Wilson enabling the cast of teenage girls to tell their story in their own honest way. Simran Hans talks bucking convention with key members of the team. 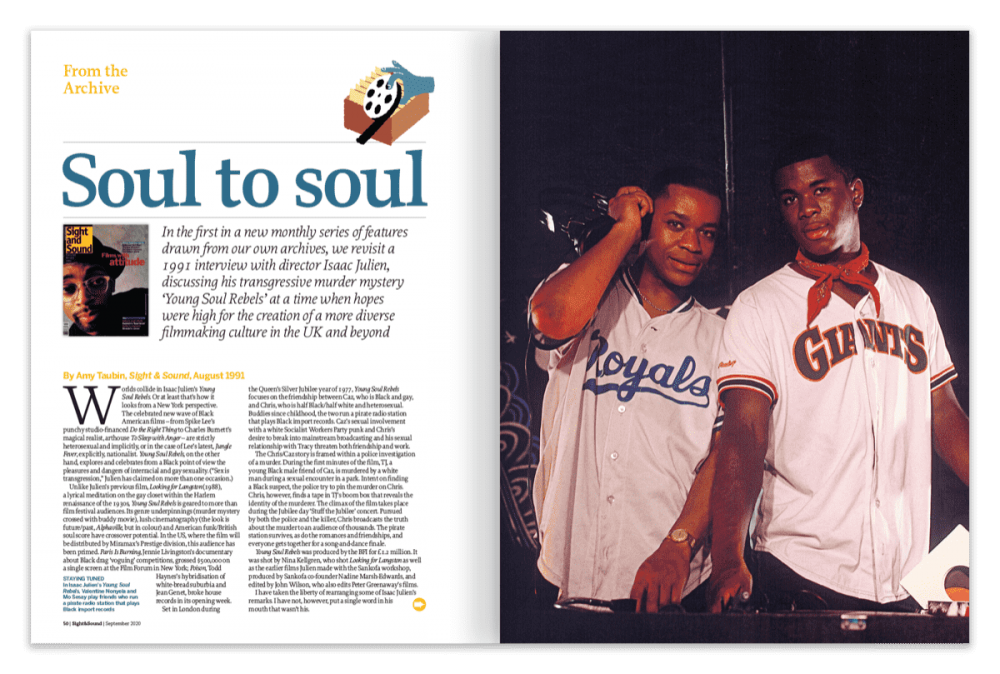 From the archive: Soul to soul

In the first in a new monthly series of features drawn from our own archives, we revisit a 1991 interview by Amy Taubin with director Isaac Julien, discussing his transgressive murder mystery Young Soul Rebels at a time when hopes were high for the creation of a more diverse filmmaking culture in the UK and beyond. 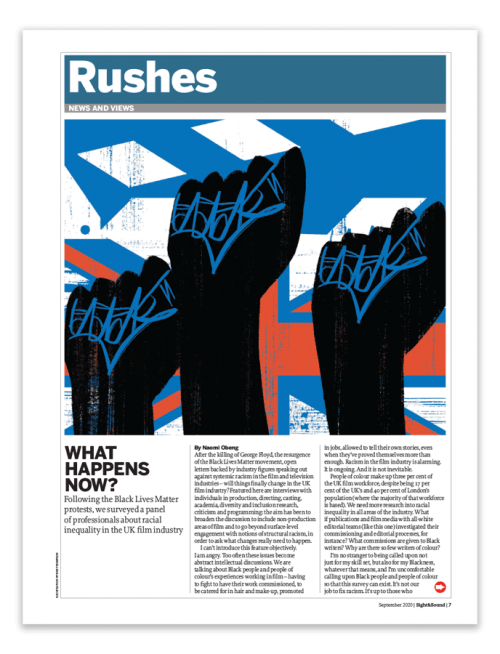 Naomi Obeng talks to workers in and around UK film about racial inequality.

With the Rio hit hard by Covid-19 and its future in doubt, filmmaker John Akomfrah pays tribute to the community-led Hackney gem.

John Bleasdale explains why outdoor cinema in Rome has had a narrow escape.

Pamela Hutchinson looks forward to the best films and TV due out – touch wood – later this year.

The numbers: indie cinemas and covid

After a strong start, 2020 has been a record-breaking year for UK cinemas in all the wrong ways. But the situation is far from hopeless. By Charles Gant. 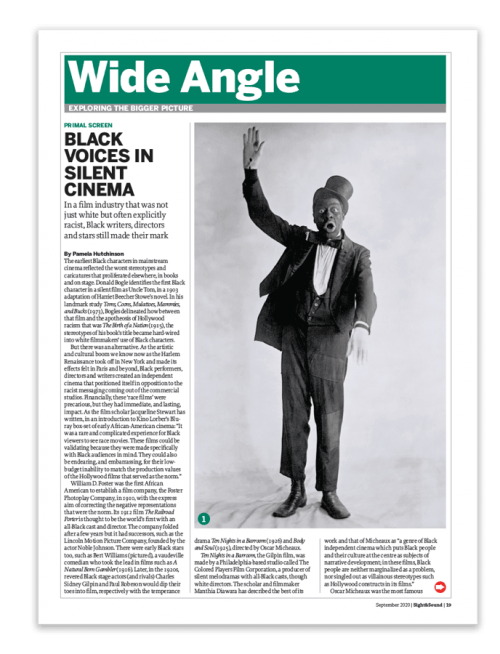 In a film industry that was not just white but often explicitly racist, Black writers, directors and stars still made their mark. By Pamela Hutchinson.

At a time when images of violence against Black people abound, Ja’Tovia Gary does far more than analyse or repeat the problem. By Matthew Barrington. 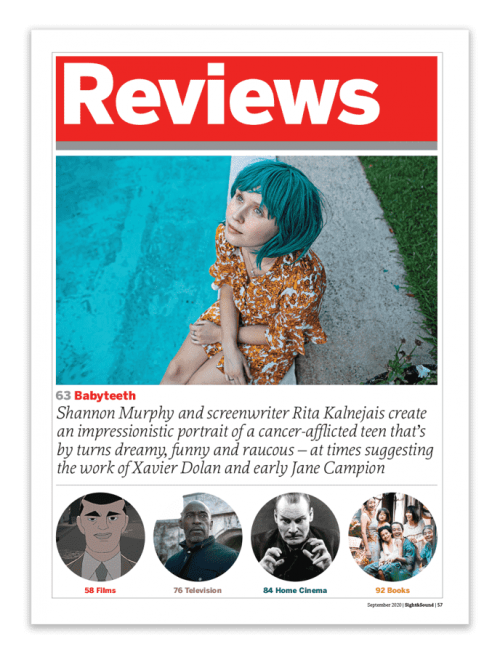 Television of the month

I May Destroy You 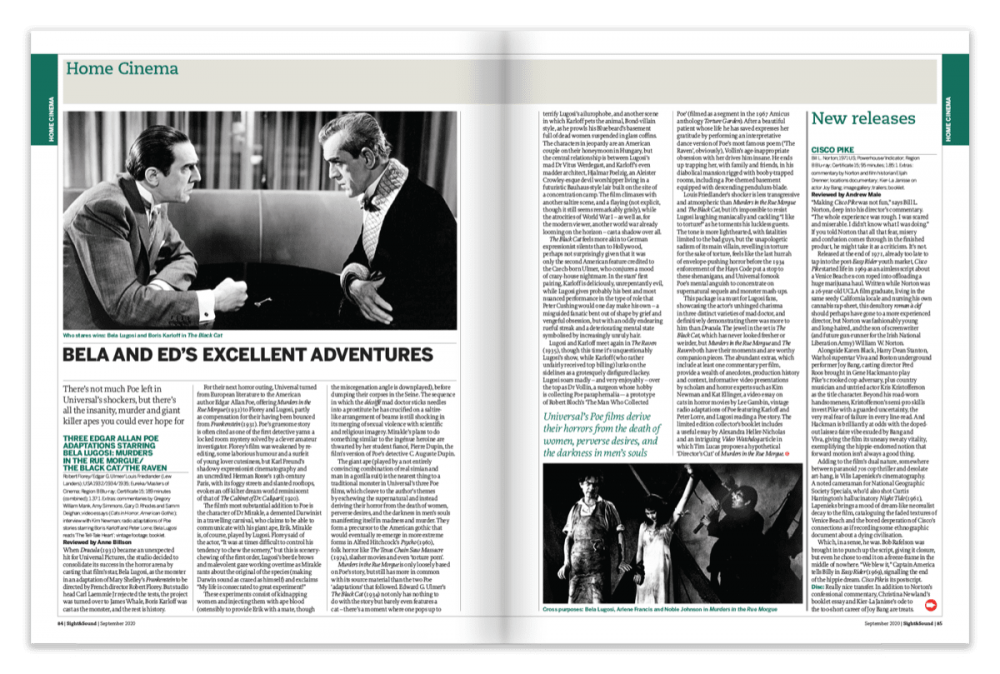 There’s not much Poe left in Universal’s shockers, but there’s all the insanity, murder and giant killer apes you could ever hope for. By Anne Billson.

Lost and found: The Cruel Sea

The first feature ever made in Kuwait can stand comparison with the great works of post-war Italian neorealism. By Chris Shields.

Archive television:
The Count of Monte Cristo + The Man in the Iron Mask 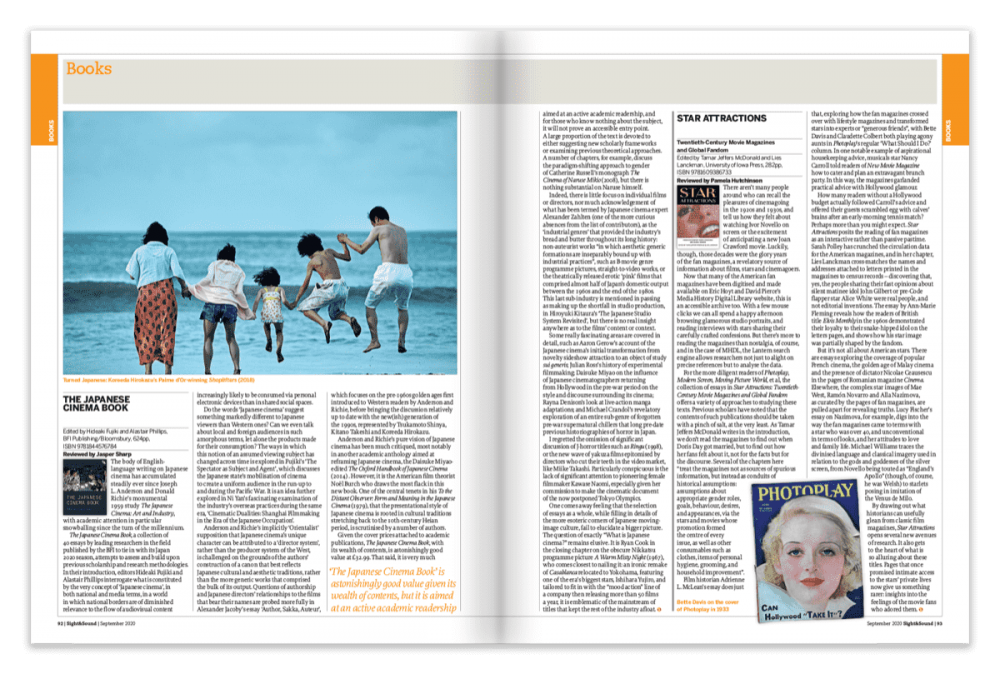 In defence of physical media 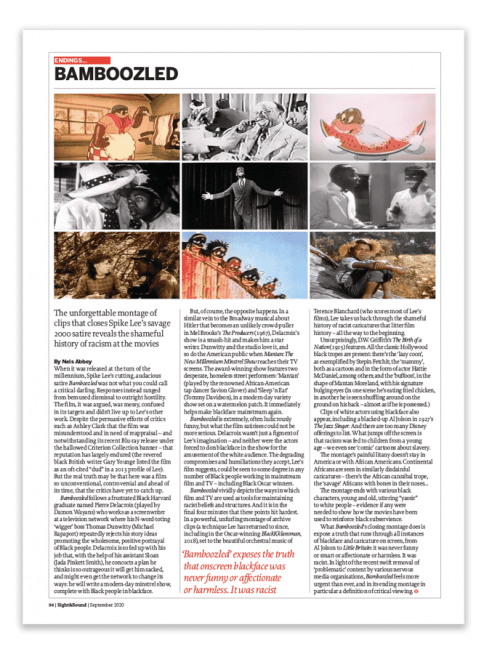 Where was Spirited Away?

In praise of the Weekly Film Bulletin

The unforgettable montage of clips that closes Spike Lee’s savage 2000 satire reveals the shameful history of racism at the movies. By Nels Abbey.