The body count vies with the word count in Lynne Ramsay’s stunningly pared-down avenger noir, with a battered but unbowed Joaquin Phoenix storming the urban night. 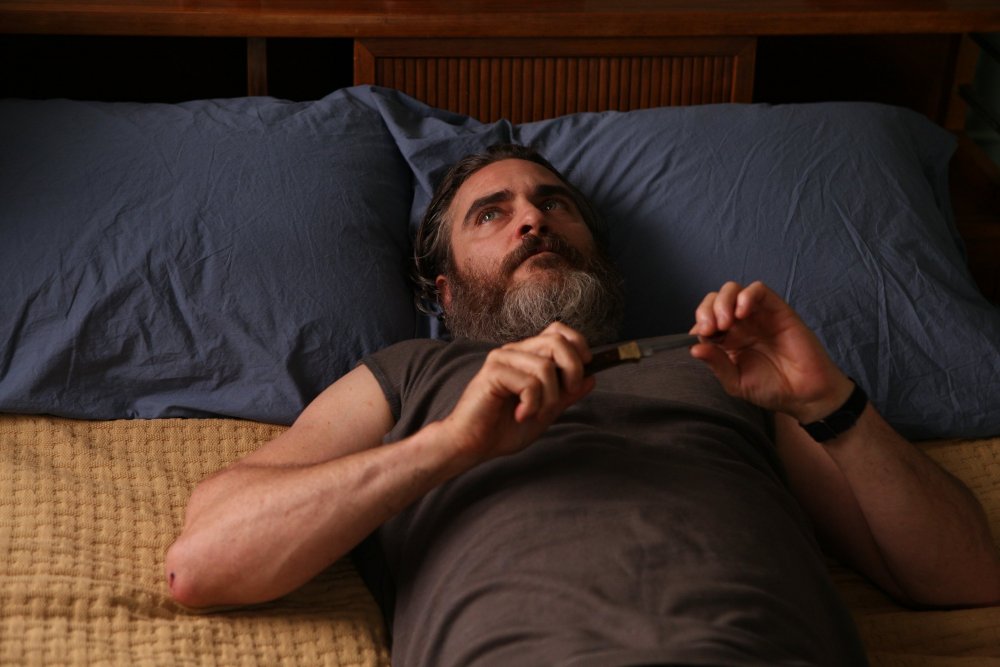 Joaquin Phoenix as Joe in You Were Never Really Here

A new film from Lynne Ramsay is always cause for celebration, her slim oeuvre, for a host of reasons, consisting of a handful of garlanded shorts and four strikingly original features over a 20-year career. Perhaps her poetic, image-driven style, lauded in Ratcatcher (1999) and Morvern Callar (2002), wouldn’t seem a natural fit for Jonathan Ames’s hardboiled novella about suicidal New York child-retrieval operative Joe (a haunted and brilliantly brutal Joaquin Phoenix), who stumbles on a high-up paedophile conspiracy. But the result is a stunningly lean and intense avenger noir, its thriller storyline studded with cryptic flashbacks and off-kilter violence. Where Ramsay’s We Need to Talk About Kevin (2011) nimbly married ‘bad seed’ horror elements with arthouse interiority, this is a wholesale and exhilarating reimagining of genre.

Despite its Taken-style themes – a driven enforcer, a trafficked child and a shadowy network – Joe’s mission to retrieve Senator Votto’s runaway daughter is a propulsive, impressionistic piece, its hero as fractured as its narrative. There’s a strong whiff of the New Hollywood of Taxi Driver (1976) and Hardcore (1979) in Joe’s near-psychosis, the political corruption and the traffickers’ underworld. But the film’s arresting colour palette, and its psychological-collage construction, which constantly overlaps Joe’s PTSD memories of his violent father and army traumas with his equally dangerous reality, also suggests the influence of Point Blank (1967).

Ramsay, mistress of the eloquent, crystallised moment, hones the flashbacks until a single shot or sequence (a van full of dead Vietnamese girls, young Joe huddled in a closet) gives up its story at a glance. For all its violence (Joe’s weapon of choice is a hefty hammer, swung with Oldboy fervour), it’s a thin-skinned movie, a textured character study stitched around a thriller. Joe’s senses are flayed by the whoosh and rattle of passing subway trains, his crunchy nutting of a passing mugger, the thudding knife-games he plays around his own feet. 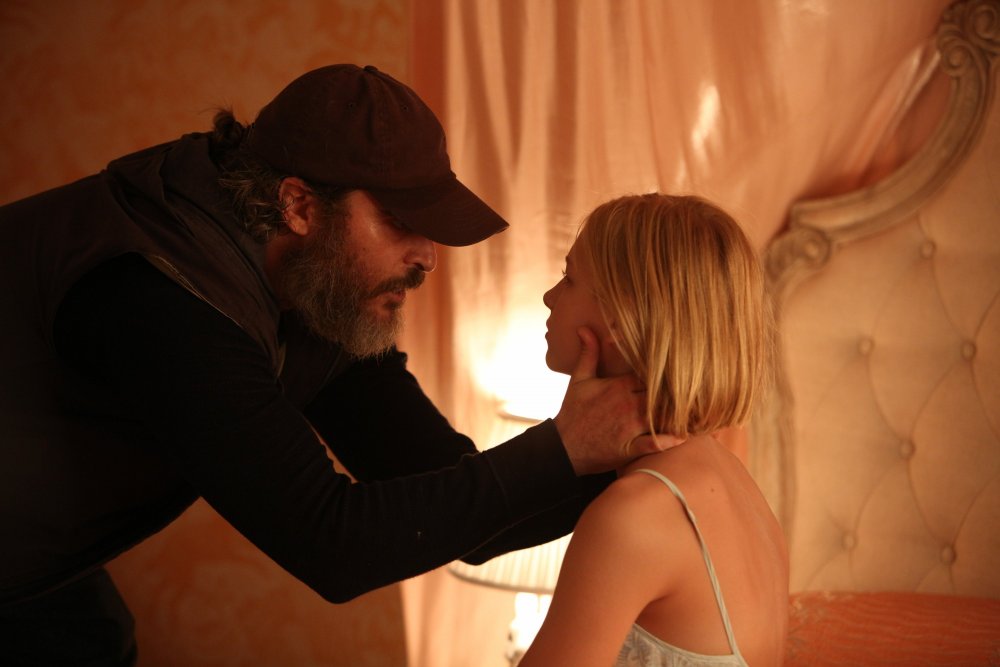 Alongside the detailed sound design, DP Thomas Townend finds sharp, incongruous beauty in a wet child against a jade-green wall, scarred flesh in a blue-lit steam room, two bodies sinking into a lake’s depths like a homecoming. Pared to the bone, and with minimal dialogue, the film’s elliptical flashbacks force the viewer to work hard to piece things together. Densely and swiftly layered, they make the slow-burn first act, devoted to Joe’s paranoid daily round, grip rather than dawdle. Occasionally, a dart of memory or fantasy so swift that it’s confusing, rather than cryptic, sounds a note of wilful obscurity. Only one, a late dare at collapsing dream and reality, threatens to throw the story off.

Phoenix, creating the latest in a string of damaged souls anchoring films such as Two Lovers (2008) and The Master (2012), completely inhabits Joe, a role for which he won Best Actor at Cannes. A taciturn bear of a man, Joe is capable of great tenderness (fussing over his aged mother), harrowing despair and an infamous death-dealing prowess: “They said you were brutal.” “I can be.” With his childhood terror fuelling his adult trade, he is both victim and killer, turning his skills on himself in repeated near-suffocations. Treating him empathetically, as a tortured man-child rather than a Travis Bickle sociopath or Hardcore hypocrite, the film never looks sideways at Joe, facing his actions head-on. 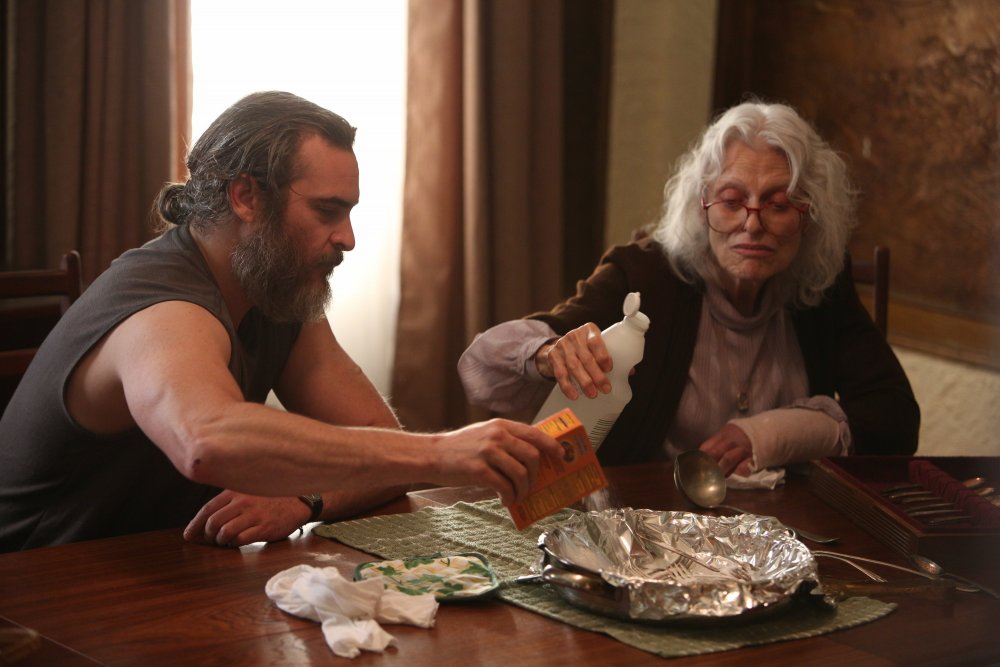 In contrast, Ramsay films Joe’s slaughter-packed missions with startling inventiveness and a lack of prurience. Our detached view of his rampage through the Manhattan brothel holding Votto’s daughter Nina is via black-and-white CCTV, with 1960s girl-group ballad Angel Baby a breathy, intimate accompaniment that skips sharply with the shift from camera to camera. Intent on avoiding thriller clichés, Ramsay gleefully wrongfoots the viewer by ending one of Joe’s killings with a bizarre act of compassion: he lies on the floor, holding his victim’s hand, as they sing along quietly to Charlene’s I’ve Never Been to Me on the radio, one destined for paradise rather sooner than the other.

Around the darkly comic pop choices, Jonny Greenwood’s retro synth score, electronica pulsing over percussion, pushes the action on. Thrumming with tension, and coupled with the film’s gritty-tender feel and neon-daubed streets, it creates the same kind of taut, nervy energy that drove the Safdie brothers’ recent Good Time.

The story propels the despairing Joe, like the eponymous Léon in Luc Besson’s 1994 film, to seek a conventional redemption in saving the ordeal-numbed Nina (a terrific Ekaterina Samsonov). Yet You Were Never Really Here refuses to paint him as her white knight, giving them a gentle, battle-scarred parity. Melancholy and formally ambitious, right to the last, it’s a film that reworks the male-rescuer template as deftly as everything else it touches. 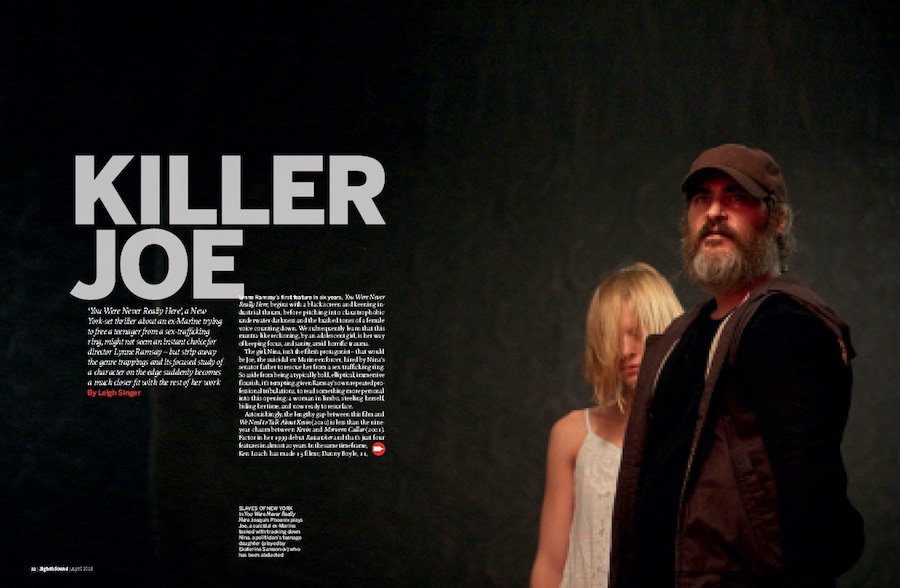 You Were Never Really Here, a New York-set thriller about an ex-Marine trying to free a teenager from a sex-trafficking ring, might not seem an instant choice for director Lynne Ramsay – but strip away the genre trappings and its focused study of a character on the edge suddenly becomes a much closer fit with the rest of her work. By Leigh Singer.