Anthony Hopkins and Jonathan Pryce are at the peak of their powers as a conservative Pope and his more liberal successor debating the best way forward for the Vatican in the modern era. 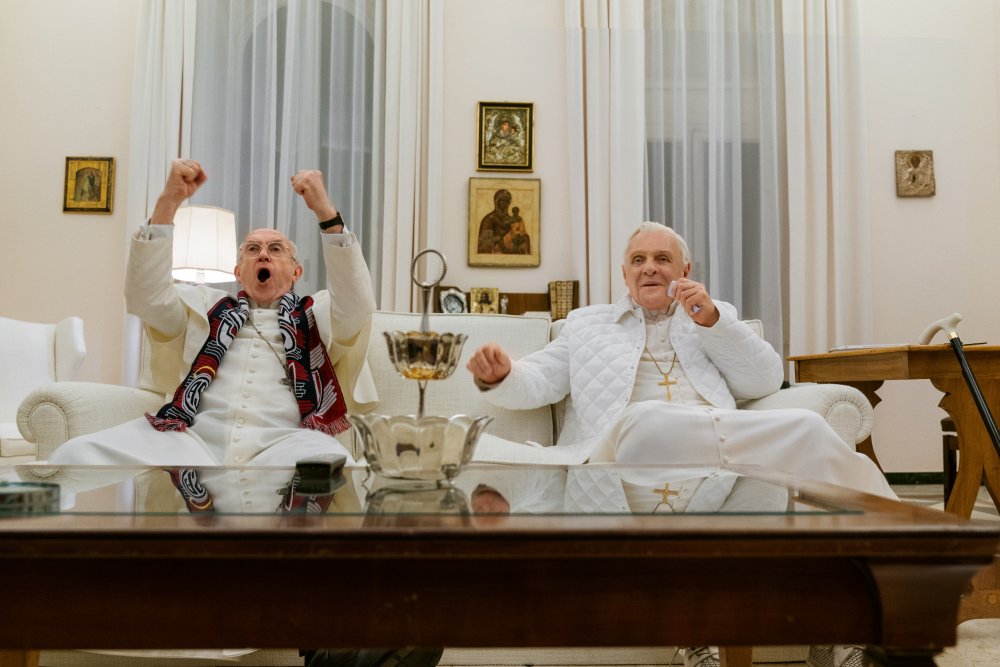 The papal succession of 2013 shattered several precedents. Not for nearly 600 years had a pope resigned rather than dying on the job; and even then, when Gregory XII stepped down in 1415, he was pushed into doing so, while Benedict XVI resigned entirely of his own accord. His successor, the Argentinian Pope Francis, born Jorge Mario Bergoglio, was the first Jesuit pope, the first from the Americas and from the southern hemisphere, and the first from outside Europe since the eighth-century Syrian Pope Gregory III.

But the transition from Benedict to Francis marked a more fundamental change. Benedict, the former Cardinal Joseph Ratzinger (known as ‘God’s Rottweiler’ while head of the Congregation for the Doctrine of the Faith, successor to the Inquisition), was intensely conservative in his views, both socially and theologically.

Bergoglio, brought up in a poor family in Buenos Aires, was known for the flexibility and relative liberalism of his views, his unpretentious way of life and his aversion to the ostentatious pomp and wealth of the Church – a successor, in some ways, to the short-lived Pope John Paul I. No wonder that, in Fernando Meirelles’s film, Pope Benedict (Anthony Hopkins) complains to Bergoglio (Jonathan Pryce) that the very “way you live”, even down to choice of footwear, is an implicit criticism of him.

Of course, whether Benedict ever said any such thing is a highly moot point; it’s by no means certain that the two men even met for any length of time, let alone held the kind of long intimate discussions that take up the greater part of the movie. But what matters is that, thanks to a fluently witty and incisive script from Anthony McCarten (screenwriter of The Theory of Everything, Darkest Hour and Bohemian Rhapsody) and top-of-their-game performances from Hopkins and Pryce, The Two Popes feels remarkably plausible. Bergoglio’s dialogue in particular rings true when compared with his observations in Wim Wenders’s recent – and slightly too hagiographical – documentary Pope Francis: A Man of His Word (2018).

Acting credits should go too to Juan Minujín, who plays the tormented younger Bergoglio during the fraught years following the Argentine military coup of 1976. In a series of black-and-white flashbacks, we’re shown the guilt he feels at not having denounced the junta’s murderous repressions, particularly its treatment of two of his own Jesuit mentors. We come to know Bergoglio better than Ratzinger, though there are early references to Benedict’s inadequate response to the scandal of priestly abuse, and on the streets of Rome a couple of Italians spit “Nazi” at the mention of his name. (Ratzinger joined the Hitlerjugend in 1941, although apparently very reluctantly.) The film offers him some protection; when it’s his turn to confess to Bergoglio, presumably about the abuse scandal, the dialogue is faded out.

Most of the film, however, is in a much lighter vein. Though initially Benedict snaps at Bergoglio, “I disagree with everything you’ve said – have enough respect to show me your real anger,” soon he’s confiding that when he has anything potentially unpopular to introduce he announces it in Latin, as only a fraction of the cardinals will understand it.

Bergoglio, meanwhile, explains that in Argentina a love of tango and football is compulsory, and even teaches the pope a few tango steps. (Meirelles sets the humorous tone with a pre-credit voiceover in which Bergoglio hopelessly fails to book himself a flight by phone.) For all his initial aversion to the Argentinian’s ideas, Benedict comes to realise that he may be what the Church needs. “There’s a saying, God always corrects one pope by presenting the world with another pope,” he muses. “I’d like to see my correction.”

At times the action becomes a little too cosy, even complacent, with the two men sharing pizza and Fanta or watching football together. But altogether Meirelles, in his best work since the le Carré adaptation The Constant Gardener (2005), keeps what’s essentially a 126-minute conversation piece between a pair of elderly men consistently watchable and even riveting, balancing close-ups with two-shots to bring out all the subtlety of his leads’ expressions, reactions and body language – and now and then pulling back to display Cinecittà’s impressive reconstruction of the Sistine Chapel. But it’s the dialogue and the acting that triumph here. McCarten’s last three screenplays earned his interpreters Best Actor Oscars. A fourth may well be in the offing.

Related to The Two Popes review: opposites attract in this brilliantly acted tale of papal succession