On its original release, our critic found the film adaptation of Pete Townshend’s concept album to be enjoyably flashy, with Tina Turner and Elton John providing the standout numbers.

from the April 1975 issue of Monthly Film Bulletin 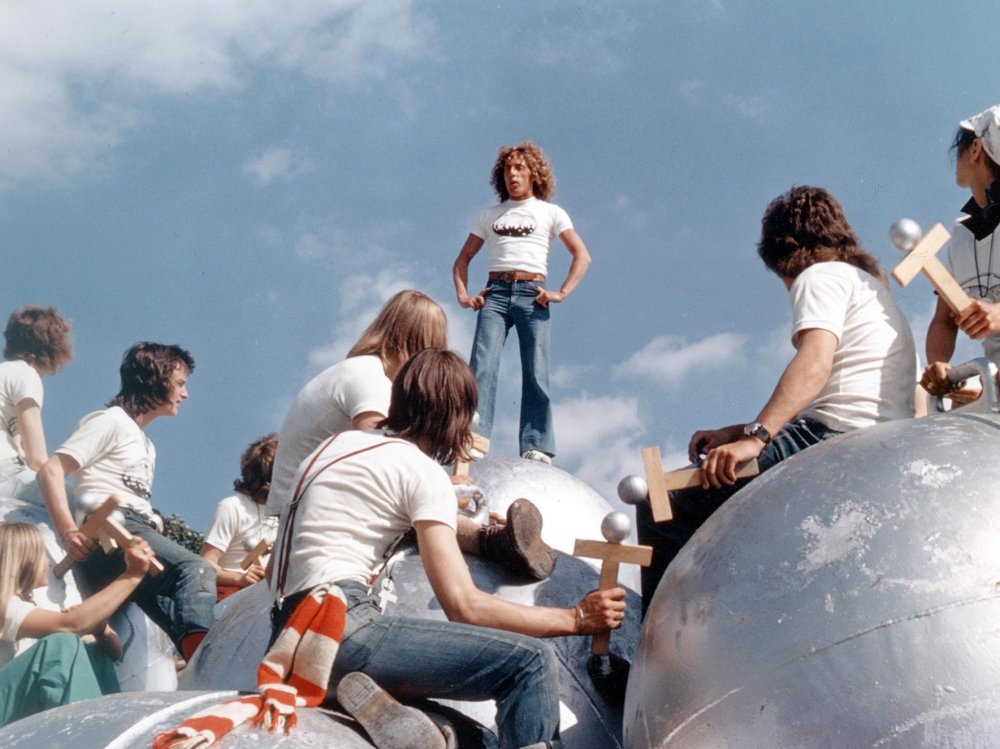 Like every other recent Ken Russell film, Tommy is decidedly a mixed bag of effects; but for once, the unevenness of the mixture seems evenly matched by the strengths and limitations of the original material. After all his dogged attempts both to inflate and undermine the romanticism in such diverse sources as Lawrence, Tchaikovsky, The Boy Friend and Gaudier-Brzeska, evidently seeking to resolve the contradictions of his approach in a kind of pure theatricality, Russell finds in Pete Townshend’s celebrated ‘rock opera’ just the right amount of imaginative possibility, open-ended pretension and musical energy to make this adaptation neither a betrayal nor an improvement but a true meeting of equivalent sensibilities.

Tommy is back in UK cinemas on re-release as part of BFI Musicals! The Greatest Show on Screen.

This is not to suggest that he hasn’t taken certain liberties with the material: the alternating use of separate choruses from Tommy’s Holiday Camp and We’re Not Gonna Take It on the original album, for instance, is replaced here by one song in toto followed by the other – permitting both a gain in narrative continuity and a loss in moral ambivalence (and, incidentally, still eliding any indication of why Tommy’s followers decide to revolt) – while the concluding sequence clearly offers only one of many possible readings of Listening to You, fusing the stylistic narcissism of both The Who and Russell into a summary statement acknowledging self-worship as the overriding preoccupation that they share, with a comparable preference for flash over depth and a hankering after profundity informing both sides of the collaboration.

For the most part, however, Russell’s illustration of the lyrics is strictly literal – eg, Sally Simpson actually does marry a rock musician from California – which places a considerable amount of the creative burden on Townshend’s shoulders. (In the monaural version under review, the lyrics of on-screen actors occasionally register with a disembodied effect, but this actually helps to highlight the parallel contributions of director and music).

Among the less successful aspects of this joint effort are the first 20 minutes or so, which resemble a run-on TV commercial; the Las Vegas inflections of Ann-Margret – rather at odds with the ethnic tenor of the music, and not made any more palatable by her strenuous efforts to ‘act’ the lines; and the unproductive ugliness of the set in Eric Clapton’s faith-healing headquarters, riddled with an assortment of unconvincing Marilyn Monroe icons.

The best parts generally feature the best songs: Tina Turner’s Acid Queen sequence is a mini-masterpiece of visual inventiveness and dramatic cohesion, helped in no small measure by Turner’s extraordinary showmanship, while the plastic conceits accompanying Pinball Wizard – from Elton John’s outrageous outfit to the actual flipper machines, both seen against a teeming mob of spectators – are lively and inspired.

If Russell’s imagination generally seems to operate more on literary than musical terms, and invariably within short units comprising the length of the tunes rather than over lengthier structures – making for a certain choppiness in continuity, and an acute absence of overall dynamics (with every sequence characteristically pitched at a hit-or-miss fortissimo) – it should be noted that even at its most lacklustre and tasteless junctures, Tommy is never boring, and always full of energy; and given the very loose narrative framework and imprecise plot that Russell has to work with, this is no small achievement.