In 1959, our critic applauded Alfred Hitchcock’s “unmatched ingenuity” and Cary Grant’s smooth lead performance in this gleefully mischievous chase thriller that’s back in cinemas to launch the BFI’s new season of thrillers, Who Can You Trust? 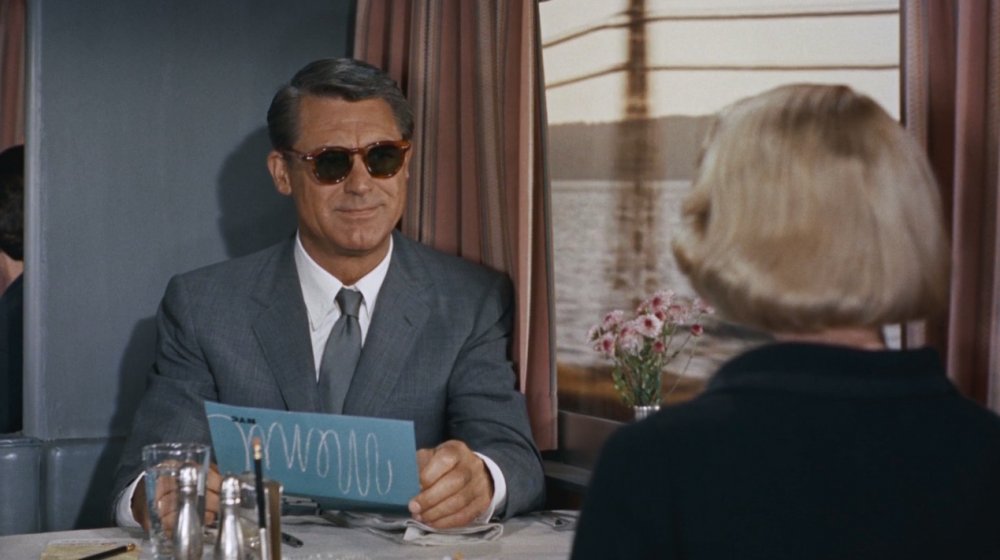 Critics who like to see Alfred Hitchcock’s films as so many cryptograms to be puzzled over for hidden symbols are going to have a hard time with North by Northwest. This is the purest piece of entertainment filmmaking we have had from him in some years; it is also, which does not inevitably follow, the most purely entertaining. After the strains of wrongful arrest, or the elaborate identity-puzzle of Vertigo, there is something spacious and assured about this return to a world of gigantic spy rings ruled by silkily mannered art collectors, of secret plans (what secrets ? – it never matters) taken out of the country by chartered aircraft, of transcontinental chases in express trains and bewildering midnight meetings in darkened airports.

The script, by Ernest Lehman, is apparently a screen original, itself a change in these days when Hollywood regards an adaptation from something or other as part of a film’s pedigree. But Mr Lehman, one feels, was working under orders. Almost 20 years ago, Hitchcock staged a final chase around the Statue of Liberty; this time, he has chosen a formidably grotesque national monument – Mount Rushmore, where the features of America’s dead presidents have been hugely hacked out of a cliff-side. Longer ago still, in The 39 Steps, the spy chief, training his revolver on Hannay, was interrupted when his wife calmly called him to lunch; here, again, interrogation is interrupted by a summons to the dinner table. And so on. Hitchcock’s ability to repeat himself has always been infinite. 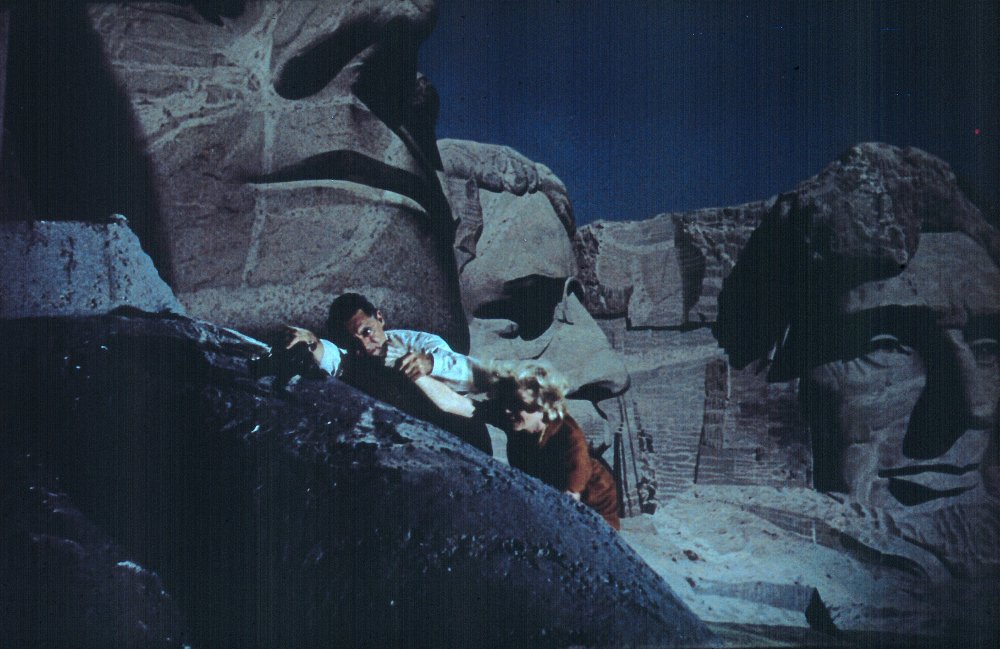 The story itself is a sort of high-pressure 39 Steps, with the hero, innocent, imperturbable and implausibly resourceful, pursued simultaneously by the police for murder and by the spies for execution. In this case he is an advertising man, played by Cary Grant without the vestige of a rough edge or a crudely spontaneous reaction, who is mistaken by the master spy (James Mason) for a secret service agent. Intervening, as one of those cool but cryptic blonde intriguers who have fascinated Hitchcock since Ingrid Bergman first played the part in Notorious, is Eva Marie Saint.

All that matters, though, in this type of story is how plausibly and rapidly the victim can be sent on the run and how much ground the chase can be made to cover. And here Hitchcock shows all his unmatched ingenuity in using public places – Grand Central Station, the United Nations Building – as backgrounds for the alien and sinister. 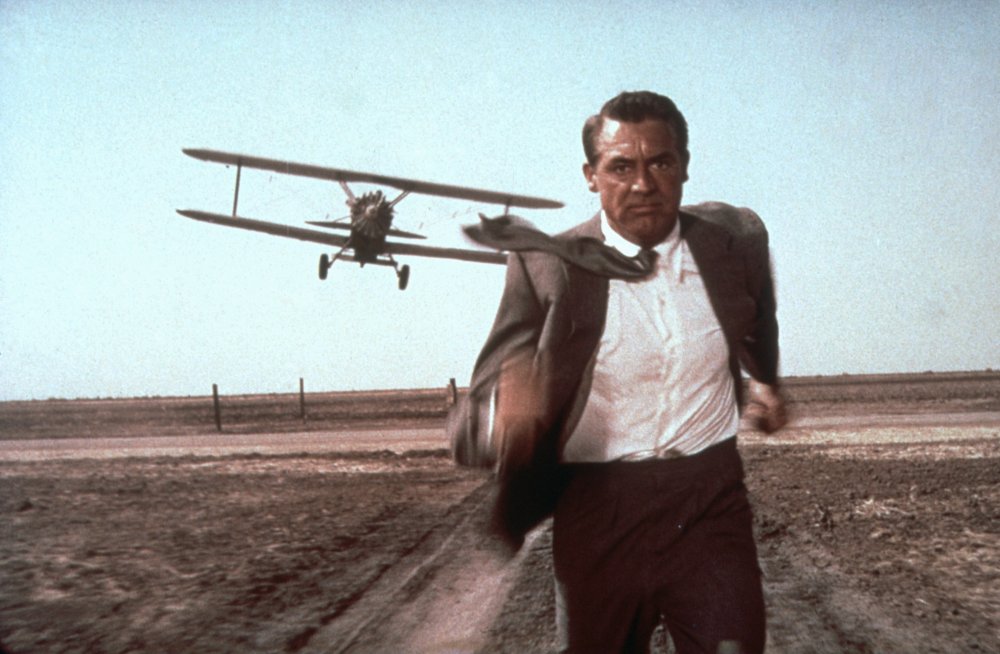 North by Northwest’s most effective sequence, however, takes place in a setting wholly bare. Cary Grant has been dropped by bus at a remote prairie stop and stands, an incongruous fugitive from Madison Avenue, in a landscape of scrub, cornfields, the occasional car speeding down the straight, flat highway. He is expecting an encounter with an agent; he waits, and eventually another man appears. They confront each other across the width of the road; but the man, introduced with such elaborate solemnity, is only a farmer waiting for a bus.

Casually, he points out a crop-dusting plane, operating where there are no crops growing. He boards the bus… and in seconds the aircraft is swooping on Cary Grant, pursuing him with a rattle of gunfire, chasing him through the growing corn. In the contrast between the slow, silent buildup, the long shots of the prairie, the isolation of the waiting figure, and the sudden, definitive burst of violence, we are safely in the hands of the most authoritative of precision experts. 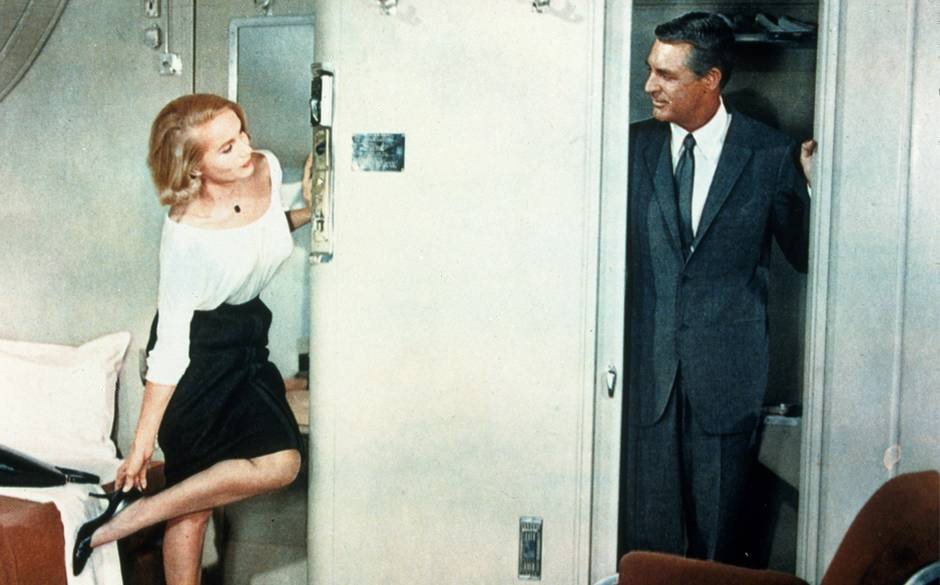 Not all of North by Northwest is as good as this. The film is ridiculously long (two and a quarter hours), and inevitably there are passages, mostly those involving the equivocal heroine, in which the action drags and no adequate substitute is offered. Motivation, here, scarcely counts: even the situation of the girl involved with, and herself spying on, the enemy agent is brushed aside. Hitchcock explored this one, up to a point, in Notorious; here he merely states it.

An advantage of these paper-thin characters, though, is that they can be used for humour, which would be redundant if the film even pretended to take its adventures at more than their face value. The advertising man, for instance, takes his mother, acidly argumentative and missing her bridge party, along with him on a detective expedition. A car chase, beginning with careful tension, ends in a ludicrous three car bumper-to-bumper pile-up.

Hitchcock’s early chase films had a zest he has never been able, or perhaps wanted, to recover. But the immense calculation that has gone into this film, the cheap joke so carefully timed, the suspense effect so gloatingly delayed, is the mark of the ultimate in professionalism. And there is something to be said for a film that never puts a foot wrong without making one feel that even the false step is a deliberate one.