The Mule review: Clint Eastwood kicks against the American Dream

Clint plays an aged drug trafficker in this disarming, funny movie, which offers a pointed critique of American values and the nuances of racial discrimination.

Clint Eastwood as Earl Stone in The Mule

It’s rare for a film about a Mexican drug cartel and the impossibility of the American Dream to be either disarming or funny, but Clint Eastwood has blessedly delivered one that is consistently both. It also boasts two threesomes, ostensibly included to prove the vitality of its protagonist.

Reteaming with Nick Schenk, who penned Eastwood’s erstwhile swan song Gran Torino (2008), The Mule follows Earl Stone (Eastwood), a 90-year-old man who has worked hard all his life but has nothing to show for it; long hours on the road estranged him from his family, and his longevity and recent financial events have now nearly exhausted the money he earned. After a chance meeting with a cartel member, Earl becomes a drug trafficker, relying on his age and whiteness to avoid police attention. (During one stop, he uses his pain-relief rub to divert the nostrils of a drug-sniffing dog.) Earl’s ill-gotten stacks allow him to help the neglected parts of the community and slowly re-enter the lives of his daughter and ex-wife.

Although The Mule is largely concerned with the hollow, harmful nature of the protestant work ethic, the decaying America within which it is set is eminently beautiful. Earl drives through the endless expanses of green plains and rust-coloured deserts and mesas of the south-west, and in his free time takes in the pleasures of two former centres of US life: the local VFW war veterans’ hall and the sort of family-owned sandwich shops that fast-food chains have nearly made extinct. Eastwood (correctly) depicts the latter as being taken over by heavy-set suburban types who stare in fear/hatred at anyone who doesn’t look exactly like them, one of many commentaries on American racism. “They see two beaners in a bowlful of crackers,” Earl casually informs the cartel associates who have accompanied him to one such joint. Later in the same scene, a cop abruptly shows up and begins questioning the two associates, even though they’ve done nothing suspicious – an adept illustration of how micro-aggressions relate to more blatant (and potentially fatal) kinds of racism. (A subsequent variation on this encounter – a Latino man who isn’t a cartel member is questioned by law enforcement – is pointedly full of statistics about how likely it is that he will be killed by police in such a situation.) 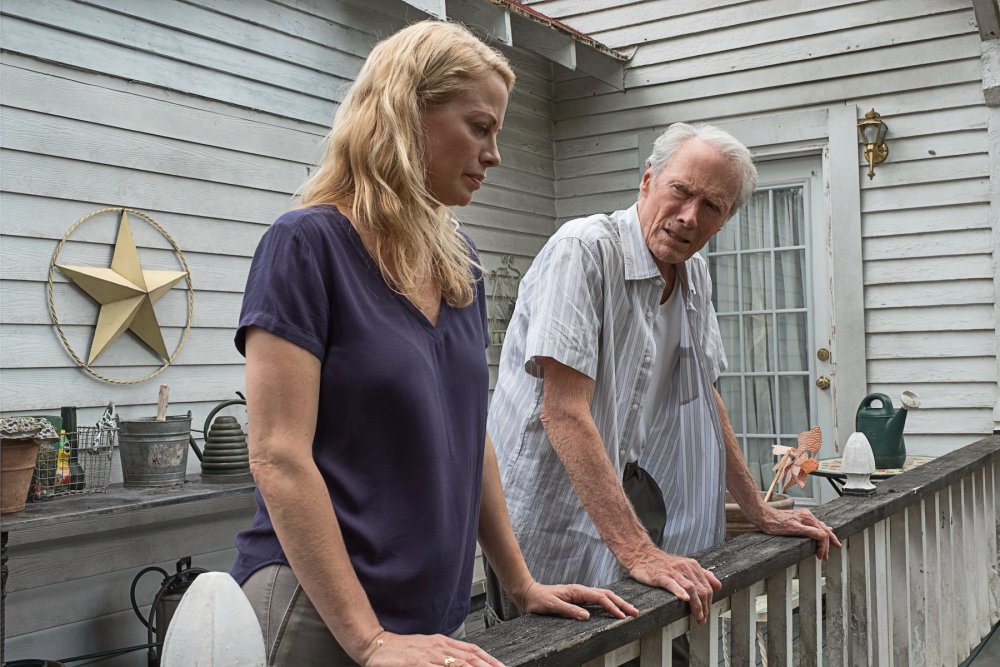 That scene also underlines the film’s refusal to make firm judgements about those who break the law to get by but don’t have the benefit of being a sometimes-cute old white man. The overwhelming majority of the cartel guys Earl interacts with are legitimately friendly, and usually just hanging out enjoying themselves – a far cry from the snarling south-of-the-border psychos destroying America in films such as Sicario (2015). Though it’s never explicitly stated, it’s understood that these men are doing something unquestionably illegal, but are doing it for the same reason that Earl is – crime is the only work that pays as well as this. The true villains who emerge – unsurprisingly, to anyone familiar with Eastwood – are those who are part of a bureaucracy or who want to implement one. DEA agent Colin Bates (Bradley Cooper) is eager to track down ‘El Tata’ (Earl’s cartel nickname) and wastes a great deal of time and taxpayer money trying to get him – and, of course, a big headline. Meanwhile, the easygoing head of the cartel (played perfectly by Andy Garcia) is whacked by an underling who wants to do things more ‘efficiently’.

Although these pencil pushers ultimately win out – Earl’s truck never looks smaller in the landscape than when the DEA’s helicopter is on his tail – by the end he has reconnected with his family, which is more than he feels he deserves. It’s the type of morally complicated resolution that, like this film’s action scenes, is at once out of step with the times and completely reflective of them – one that suggests Eastwood will be yelling at a chair with an imaginary Trump in it during a Sanders rally in 2020.

Related to The Mule review: Clint Eastwood kicks against the American Dream