Fantastic Beasts and Where to Find Them review: a fiddly start for J.K. Rowling’s wizarding prequels

The Harry Potter author extends her Wizarding World to Prohibition-era New York with this ambitious if sometimes awkward offcut, the first of five planned movies based on her 2001 whimsical bestiary.

Having seen the seven-book/eight-film Harry Potter saga to its conclusion, J.K. Rowling and Warner Brothers were unable to resist returning to the well and here kick off a prequel series. Rowling’s Fantastic Beasts and Where to Find Them (whose proceeds mostly go to charity) is not a novel but a whimsical bestiary – purporting to be one of Harry’s annotated Hogwarts textbooks. This film script (Rowling’s first) is essentially a screen original, furthering the creatrix’s expansion into other media (which also includes co-authoring a one-generation-on stage sequel, Harry Potter and the Cursed Child).

There are a few tiny continuity elements – tousle-haired Newt has been expelled from Hogwarts but was evidently an earlier favourite pupil of headmaster Albus Dumbledore, and his new romance is complicated by a prior entanglement with an ancestor of supporting Potter villain Bellatrix Lestrange – but this not only goes back in time to explore more of the history of Rowling’s universe but relocates it to a surprisingly grey, Prohibition-era New York City.

Here, the faintly infuriating Jim Dale-ish English clod-hero runs up against a ripe selection of Yank stereotypes: a cheery Oliver Hardy-shaped baker (Dan Fogler), carried along for the wild ride after his case of doughnut samples becomes mixed up with Newt’s portable Tardis of monsters; a cigar-chomping speakeasy-proprietor gnome (Ron Perlman – his presence a reminder that Guillermo del Toro marked out some of this territory in 2008 in Hellboy II: The Golden Army) who packs his wand in a shoulder holster; a dizzy telepathic flapper (Alison Sudohl) whose squeaky voice evokes 1920s singer Helen Kane, inspiration for the cartoon character Betty Boop; a Citizen Kane-like press baron (Jon Voight) with political connections, barely present in this plot but liable to be a grudge-holding major antagonist in sequels; an anti-magic campaigner/abuser of orphans (Samantha Morton) who combines the puritanical witch-hunting zeal of Cotton Mather with the saloon-smashing no-fun ethos that led to Prohibition; and a nattily dressed FBI type (Colin Farrell) with a severe short-back-and-sides who – in a faint echo of Harry Potter and the Philosopher’s Stone – is only a placeholder for a major villain to come (Johnny Depp, swivel-eyed like a blond Peter Lorre). 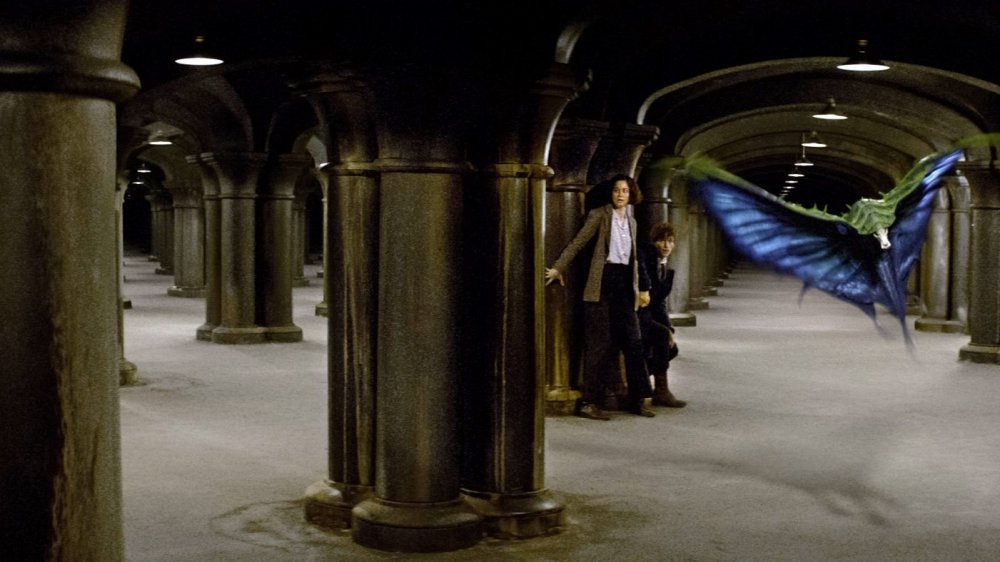 With dependable David Yates – who handled the wind-up of the Potter series – back on board, and the now-mandatory showstopping effects (a touch less magical, it has to be said, than the more visionary sorcery-in-New-York of Doctor Strange), this seems to aim for acceptable rather than outstanding. Its actual plot, which focuses on Credence (an agonised Ezra Miller, looking like Walerian Borowczyk’s Mr Hyde) and his djinn-like tortured spirit, takes a backseat to non sequitur japes with well-realised beasts who dash about doing not terribly uproarious slapstick (a duck-billed kleptomaniac marsupial keeps making Newt look like a master crook, a glowing-snouted rhino mutant wants to mate and isn’t too choosy what species it couples with).

It remains tricky to spin a film – let alone a series – out of a non-narrative book, and Rowling and Yates fall back on soap-like tricks (a romance paused to blossom, an as yet unrevealed master-villain scheme) to set gears in motion. It’s spectacular and promising, though at first exposure its characters (human and otherwise) are often as grating as charming, with Eddie Redmayne and Katherine Waterston relatively new to blockbuster material after eye-catching work in more challenging, less-seen drama and not yet entirely comfortable running goggle-eyed after billion-pixel mythical creatures and continuing franchise glory.

Related to Fantastic Beasts and Where to Find Them review: a fiddly start for J.K. Rowling’s wizarding prequels