Film of the week: Cold War dances to the music of hard times

Pawel Pawlikowski triumphs with a romantic epic cut down to a series of evocative episodes, with luscious monochrome photography and an unimprovable cast. 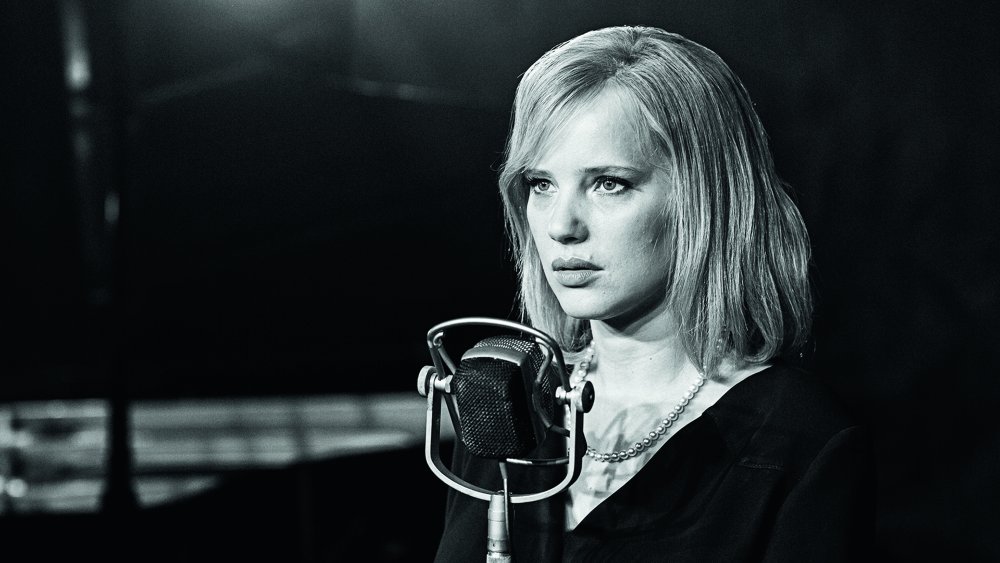 Pawel Pawlikowski probably doesn’t know it, but his second Polish film (after Ida, 2013, also shot in monochrome and Academy ratio) is a virtual shadow of Jia Zhangke’s second feature Platform (Zhantai, 2000): a film about romantic relationships in and around a song-and-dance troupe which is buffeted by changing political times.

Obviously there are several big differences. Jia’s film, set across the 1980s, shows its troupe abandoning its communist repertoire as China shifts from hard-line Maoism to state-controlled capitalism (Taiwanese pop gets it going) and the film comes to focus on the enervation and disappointments of life in the new ‘liberal’ era. Pawlikowski’s episodic film, set between 1949 and 1964, charts the opposite political trajectory, from the slow-but-sure imposition of communist imperatives and methods on post-war society to the impossibility of living honestly in hardline communist Poland. The relationships in Pawlikowski’s film are a lot more torrid and volatile than anything in Jia’s film, but both movies are rooted in a love for music and both end sadly, pessimistic about an authoritarian state’s effortless ability to hobble personal relationships.

The starting point for Cold War was Pawlikowski’s desire to make a film about his parents, named Wiktor and Zula (he describes their relationship as “a never-ending disaster”), both of whom died in 1989 just before the fall of the Berlin Wall began toppling East Europe’s communist regimes. He says the only way he could make it work was to turn both of them into fictional characters – although he still dedicates the film “to my parents”.

So his Wiktor becomes a middle-ageing musician, clearly with time in the West under his belt, who rallies from the nightmare of World War II by somewhat half-heartedly joining a woman musicologist in recording regional folk songs and recruiting villagers to perform them in a new ‘folk culture’ troupe. (In the opening scenes they are Poland’s answer to Iona and Peter Opie, albeit more interested in love songs than nursery rhymes.) And the film’s Zula becomes a survivor of sexual abuse who poses as a villager to infiltrate the auditions for the troupe; she is soon established as the star of its shows, as Wiktor’s lover, and, she cheerfully admits, as a spy on Wiktor’s attitudes and behaviour. The troupe itself, named Mazurek, is quite closely modelled on the real-life Mazowsze ensemble, which was forced into cheerleading for Stalinist policies in the 1950s and still exists today as a bastion of supposedly traditional folk culture. 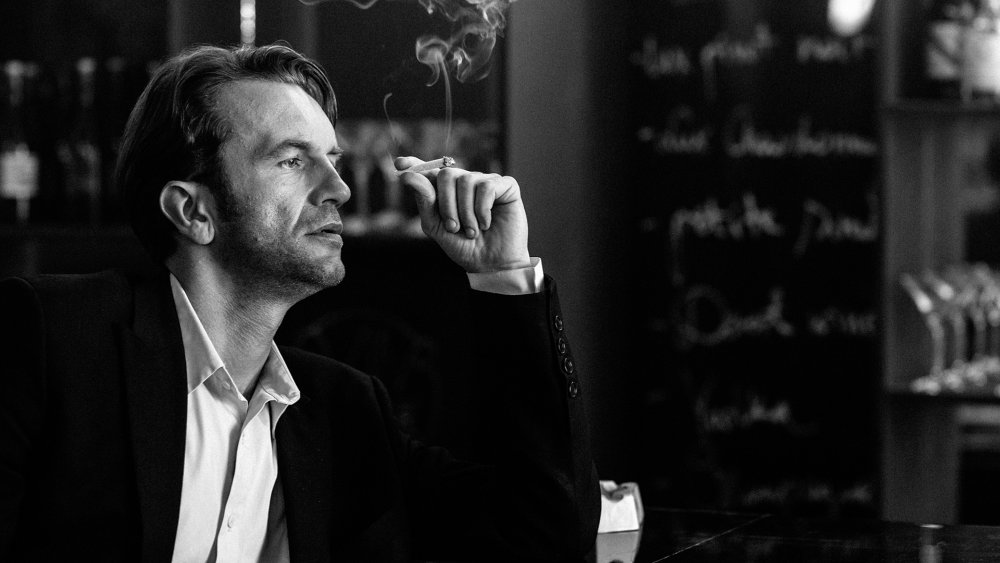 The film’s Wiktor and Zula (like, apparently, their real-life prototypes) suffer from the ‘can’t live together/can’t live apart’ syndrome, divided by opposite temperaments, incompatible ambitions and different responses to Poland’s communist regime. Wiktor wants to defect to the West at the first opportunity – it comes when Mazurek is invited to perform in East Berlin – but Zula doesn’t see the need or point. She eventually marries an unseen Sicilian to get the Italian passport that will allow her to join Wiktor in his attic in Paris, but she doesn’t rate her chances as a French chanteuse and anyway finds émigré Wiktor to be an enervated shadow of the man he was in Poland. Back in Poland, though, Wiktor is thrown into jail for defecting and Zula has to marry again to access the ‘connections’ that will get him released. Pawlikowski details the catch-22s with a bluesy intensity.

The title suggests a political thrust, but this is a movie in which the political is personal: what separates Wiktor and Zula is less the Iron Curtain than an intractable cold war of the heart. Pawlikowski again proves himself a director of remarkable economy: for a filmmaker who insists that his projects begin in “chaos” he has a very sure sense of how much or little is needed to carry the emotional threads of individual scenes, and of how a fragmentary narrative can yield an emotionally (and musically) credible arc.

His cast is unimprovable (Joanna Kulig as Zula more than fulfils the promise of her brief scenes in Ida), but other collaborations are equally remarkable: the production design is consistently spot-on, right down to a framed photo of Shostakovich, and Marcin Masecki’s score is skilled and varied enough to work as a non-visual ‘film’ in its own right. Lukasz Zal’s lovely cinematography here is the opposite of his work on Ida – elegant circular tracking shots, chiaroscuro interiors – but entirely in the service of a narrative which picks out key episodes across a span of 15 years and trusts the viewer to read the signals and cues which fill in the gaps. 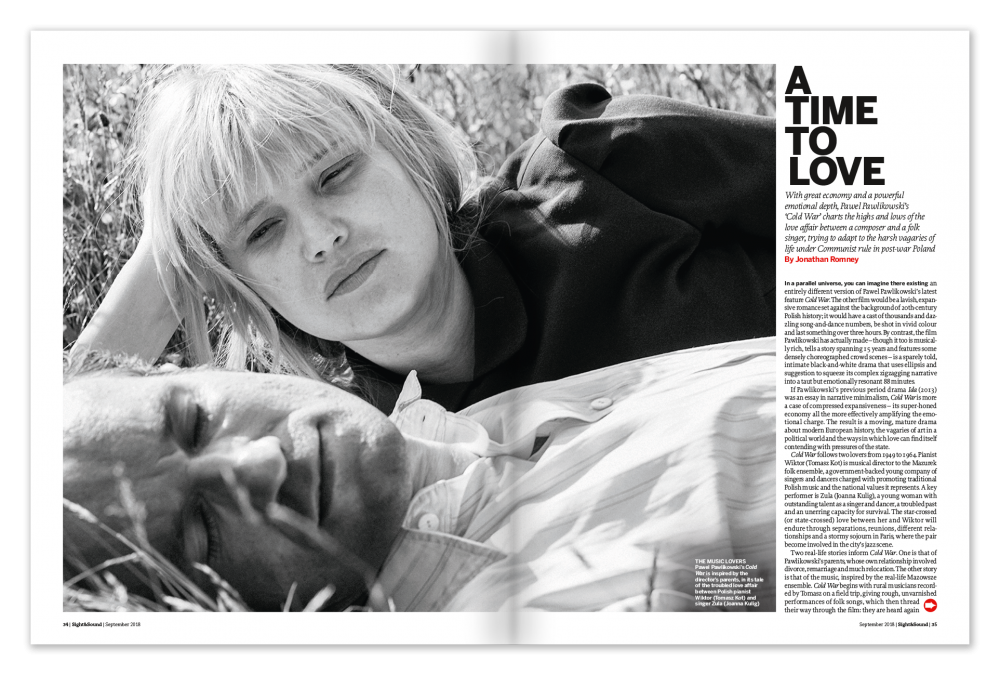 A time to love

With great economy and a powerful emotional depth, Pawel Pawlikowski’s Cold War charts the highs and lows of the love affair between a composer and a folk singer, trying to adapt to the harsh vagaries of life under Communist rule in post-war Poland. Jonathan Romney talks to the director.

Related to Film of the week: Cold War dances to the music of hard times