The Ballad of Buster Scruggs first look: a six-pack of western rambles by way of the Coen brothers

Joel and Ethan Coen explore how the west was spun in an eclectic portmanteau that covers the American cinema’s foundational genre territory with gimlet-eyed glee. 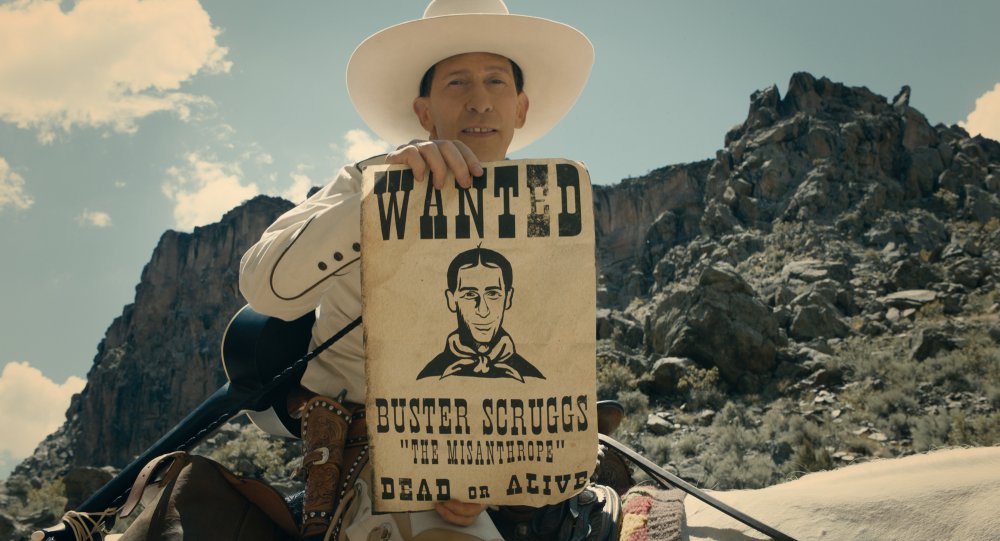 The Netflix ident has become a familiar sight in this first week of the Venice Film Festival, gracing Alfonso Cuarón’s Roma and Orson Welles’s once-unfinished The Other Side of the Wind. Paul Greengrass’s 22 July will follow, but first comes another hotly-anticipated offering, The Ballad of Buster Scruggs, from Joel and Ethan Coen. Initially announced as a TV series, The Ballad of Buster Scruggs has been retooled as an anthology in the style of 60s Italian portmanteau films such as Spirits of the Dead, Boccaccio 70 and Yesterday, Today and Tomorrow – here bringing together a sequence of six tales of varying length and genre, all united by the story-rich setting of the Old West.

First, we open on a weathered green hardback, bearing the title The Ballad of Buster Scruggs and Other Tales of the American Frontier. The camera peers closer as a hand turns the pages to reveal short stories with the names such as Meal Ticket, Near Algodones and All Gold Canyon.

Before all that, though, the Coens first recount The Ballad of Buster Scruggs, which is where our title hero (Tim Blake Nelson, returning to the Coens fold after O Brother, Where Art Thou?) appears, coming into view from across a broad rural plain crooning the folk tune Cool, Clear Water. He’s the San Saba Songbird, a singer and a gunslinger who both sounds and looks like the country music legend Hank Williams (who, in fact, once recorded that very song) with his broad smile and pristine white get-up. Inside Llewyn Davis cinematographer Bruno Delbonnel’s hyper-real photography perfectly suits such a storybook vision of the frontier, while the Coens deploy stylistic flourishes one would expect to find in a Looney Tunes short: outline silhouettes of dust hang in the air; faces blacken with gunpowder and bullets shoot right through the peaks of ten-gallon hats, leaving perfect, circular holes.

Scruggs’s singing cowboy is just one of a variety of western archetypes that are given the Coens treatment: in All Gold Canyon, a white-bearded prospector (Tom Waits) scours an untouched American Eden for a pocket of gold, singing the old Irish song Mother Machree; in Near Algodones, a would-be bank robber (James Franco) is beset by misfortune; in That Gal Who Got Rattled a young woman (Zoe Kazan) travels the Oregon trail with an uncertain future ahead of her.

Throughout, the Coens delight in drawing out stories from this rich and varied western tradition, revelling in the various modes and moulds of storytelling inspired by the Old West. The pair, it seems, aren’t fussed about revisionism or directly subverting the formula – so expect to find savage ‘Indians’, war parties and damsels in distress all present, intact and untroubled by a 21st-century perspective. Instead, The Ballad of Buster Scruggs plays out as a tribute to the flexible nature of the western setting, which can accommodate comic vignettes, grim irony, gallows humour and even chilling, Gothic yarns set on a dark, misty night (as in the final story, the Stygian stagecoach journey The Mortal Remains).

This is also, in turn, a showcase for the Coens in all of their filmmaking guises, from the playful to the profound and all points between. It’s a smorgasbord approach that can inevitably feel a little scattershot, and recalls their previous directorial offering, the divisive Golden Age of Hollywood mish-mash Hail, Caesar!; but The Ballad of Buster Scruggs continues the brothers’ interest in stories and artforms that are uniquely American – here the foundation myths, in all their bloody, twisted, enthralling glory, that formed an identity of a nation.

Related to The Ballad of Buster Scruggs first look: a six-pack of western rambles by way of the Coen brothers