The Poll before the Polls: Sight & Sound’s 1942 ‘Quiz on Film Classics’ 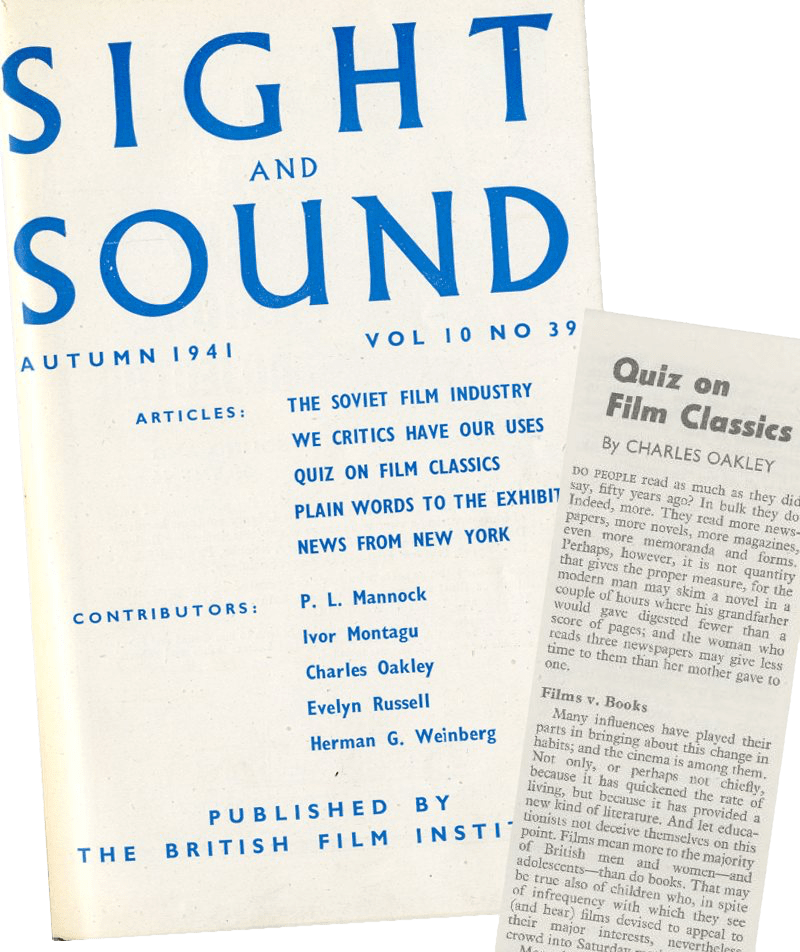 Everyone is quite right, but the exercise was not entirely without precedent. The magazine first canvassed contributors and readers on the question of the ‘Ten Classics’ ten years earlier, at the height of the Second World War. And while the results were not tabulated, nor, so far as one can tell, widely discussed, Hitchcock did not do too badly at all.

In the Autumn 1941 issue, drastically reduced in size because of paper rationing, C.A. Oakley, a lecturer at Glasgow University and a leading figure in the film society movement in Scotland, proposed ‘Ten Film Classics’, and the editor invited readers to respond. The National Film Library gave its collective view on the same page. What lay behind the lists was a marked and unexpected change in the policy of the British Film Institute, publisher of S&S and custodian of the NFL (now the BFI National Archive), earlier in the year.

The BFI had been founded in 1933-4 principally to promote the use of film as a teaching aid in schools, but it became increasingly involved in what we now call ‘film culture’: film societies, repertory cinemas and what they then called ‘film appreciation’. On its foundation in 1935 the NFL was the penniless ghost of an improbable scheme to centralise the distribution of all government and educational films. Within a few years, however, as its vaults filled to brimming with donated fiction films, a much larger role was in view.

Nonetheless, on the outbreak of war the BFI’s governors decided to close S&S – “with regret since it was the last remaining ‘cultural’ film periodical published in the British Empire” – and considered that the NFL would be confined to the “routine work of acquiring and preserving films”. Fortunately they didn’t get their way, and as it turned out the NFL in particular, once evacuated to the countryside to escape the Blitz, expanded faster than ever. In February 1941 its Loan Section announced that film appreciation would become its “only object”.

The term, which betrayed the BFI’s roots in education, might be understood as a proselytising variety of cinephilia, shaped by film culture’s relative precariousness and need to make converts. Oakley, proposing his top ten, made the case for it in less than ingratiating language, arguing that the cinema-going public had “never been given any guidance on how to like films”. The way to go about giving it was “by selecting, say, ten outstanding fiction films for screening as ‘classics’ in schools” and training teachers how to teach them.

His list included what were (and remain) critical standards – Murnau’s The Last Laugh (1924) and Eisenstein’s Battleship Potemkin (1925) – but also, possibly surprisingly from the contemporary point of view, “a modern Western, such as The Plainsman” (1936) and “Alfred Hitchcock’s The Lady Vanishes” (1938).

The NFL’s list included not a single sound film, but there may be an explanation in the supply of films it had to offer for hire. By June 1941, when the Loan Section issued a new catalogue of 110 titles, the BFI was arranging between 50 and 60 programmes a week for screening groups around the country – half of them in the armed forces, mostly of films on 16mm, and probably most of them of silent. It specialised in the German and Soviet classics of the 1920s, represented in the list by E.A. Dupont’s Vaudeville (1925) and Pudovkin’s Storm Over Asia (1928).

There was another more obvious reason for the backwards gaze. The fall of France in 1940 had cut off the supply of foreign-language films, and most of London’s art and repertory cinemas had closed by the end of that year. Forsyth Hardy, one of the founders of the Edinburgh Film Guild, wrote in the Summer 1941 S&S that the provincial film societies, which relied on the continental films imported by the London cinemas, had been widely expected to fold; but instead they turned to the past, and particularly to the German past. 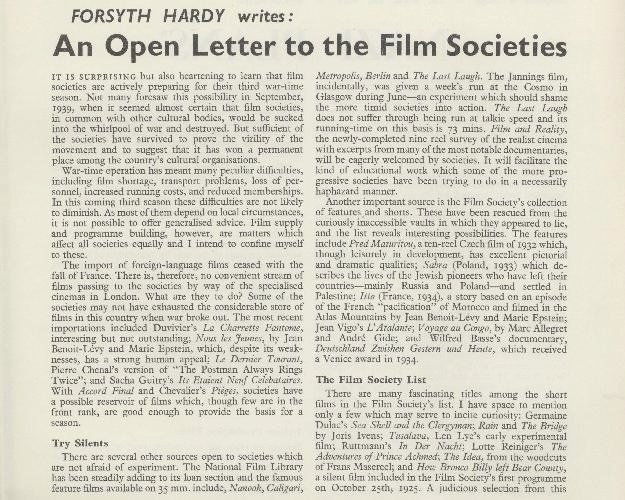 An Open Letter to the Film Societies, from the Summer 1941 issue of Sight & Sound

In June 1941 the Cosmo cinema in Glasgow, one of a tiny number of specialised cinemas still operating, showed The Last Laugh, among the films offered by the NFL, for a week.

Oakley prophesied a “great deal of discussion”, and in the Spring 1942 issue it was confirmed that his article had “aroused much interest”. Ernest Lindgren, head of the NFL since its inception and still only 31 years old, wrote that Oakley had “touched the fuse to a whole gunpowder barrel of controversy”. Lindgren’s conception of film appreciation had slightly less to do with formal education, but was equally concerned with conveying the riches of film art “to a far wider circle” than that to which it had been confined in the 1930s.

His list was a sneaky affair that mentioned 12 films – two by John Ford – but somehow settled on nine, one of which, Stroheim’s Greed (1925), he had not actually seen, with the curious claim that “I cannot fill the tenth place”. “Like the game which requires one to jettison various specialists or celebrities from a hypothetical balloon,” he wrote, regrettably omitting to name names, “it is amusing enough to speculate on in fun, but would be a terrifying choice to have to make in earnest.” 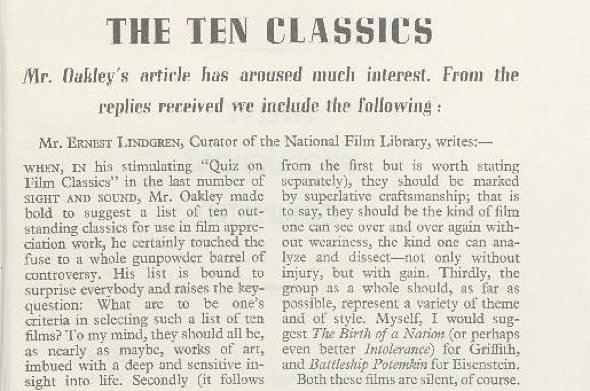 Citizen Kane had opened in London, at the Gaumont cinema in Haymarket, in October 1941 – too late for Oakley and the NFL – and was released nationally in March 1942. It appeared neither on Lindgren’s list nor on those of the two readers whose choices were printed. Though instantly acclaimed in the press – “I am not at all sure that it isn’t the most exciting film that ever came out of anywhere”, said C.A. Lejeune in the Observer – it was doubtless a little fresh for canonisation.

The first reader, a Mr Newport of Bath, followed Oakley in nominating The Lady Vanishes; the second, Mr R. Middleton of Ealing, preferred the same director’s Sabotage (1936) or Young and Innocent (1937).

The responses appeared under the title ‘The Ten Classics’. It seems highly likely that many more were received, but there wasn’t the space to print them (or the manpower to tot them up), apart from any other concerns.

As Ian Christie writes in the current (September) issue, Hitchcock did not breach the official top ten until 1982, when Vertigo (1958) was joint seventh with Welles’s The Magnificent Ambersons (1942) and Antonioni’s lady-vanishing L’avventura (1960). But like Kim Novak’s character in the film, in a way he had been there before.