The co-writer of Gomorrah makes his directing debut with a raw yet lyrical portrait of ‘four old ladies in a flat’. 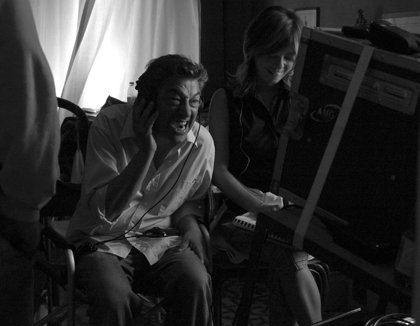 The Russian novelist Tolstoy suggested that “if you want to speak to the world, then write about your village”, and this advice has been heeded by the fiftysomething Gianni Di Gregorio in his directorial debut Mid-August Lunch. Set in the Rome district of Trastevere during a sweltering August holiday weekend, and featuring a mainly non-professional cast, its principal setting is the apartment shared by the middle-aged Gianni (Di Gregorio himself) and his domineering 93-year-old mother Valeria (Valeria De Franciscis). The wine-loving Gianni finds himself looking after not just Valeria, but also Marina (Marina Cacciotti) and Maria (Maria Cali), respectively the mother and aunt of Gianni’s building manager, plus his doctor’s mother, Grazia (Grazia Cesarini Sforza).

Unveiled at Venice last year where it won the prize for best first feature, Mid-August Lunch was also awarded the Satyajit Ray award at the 2008 London Film Festival. Scripted by Di Gregorio, it’s a humane and gently amusing tale which acknowledges the vulnerability and loneliness of its elderly characters whilst celebrating their vitality and playfulness: like children they bicker and make up, and they enjoy bedtime stories and midnight feasts, leaving their host to cope with all the domestic duties.

Having grown up in Rome and studied acting and directing at the city’s Accademia di Arti Sceniche, Di Gregorio worked in the theatre, until a viewing of Scorsese’s Mean Streets persuaded him that he should devote himself to cinema. He became a screenwriter and later an assistant director to Matteo Garrone on the likes of Roman Summer, The Embalmer and First Love, before co-writing with Garrone the Neapolitan Mafia expose Gomorrah. Despite Mid-August Lunch being a low-budget feature, Di Gregorio and producer Garrone were able to use their contacts within the Italian film industry to bring on board some highly rated technical collaborators, including director of photographer Gian Enrico Bianchi and editor Marco Spoletini. And for his quartet of strong-willed old ladies, Di Gregorio cast an aunt, a friend of his family, and two members of local elderly clubs.

What was the inspiration for ‘Mid-August Lunch’?

I wrote the script ten years ago, but it took me ages to pluck up the courage to direct the movie. The problem was that I couldn’t find anybody to give me the money to make the movie. They kept telling me that I was mad. ‘Who was going to like a movie about four old ladies in a flat?’, they said. Deep inside I always thought there was something universal in the story, which everyone could relate to.

I am the only son of a widowed mother, and I lived with her, whilst I was married for many years. One summer the condominium manager really did ask me to look after his mother for the August bank holiday. I refused, but I wondered what would have happened if I had accepted, and that became the script for Mid-August Lunch.

Are people surprised that you co-wrote ‘Gomorrah’ and have directed ‘Mid-August Lunch’, given they are such different films?

Absolutely! By my nature I like to make people laugh. Even when I write serious scripts, I try and find something funny to slip in. I think this comes from being an only child, who was brought up in a very austere and strict environment. My comic side has to manifest itself somehow. Mid-August Lunch gave me the opportunity to set my demons free and to do whatever I liked.

How hard was it to combine directing non-professional actresses and taking the lead role of Gianni?

The first few days on set I was seized by terror! Then my team and I realised that it was pretty much impossible to direct these ladies, and that the best way was to let them be and to do their own thing. This required some sacrifice on my part, because I’d worked on the script for years. I realised I would have to throw most of my own work away and go with the flow. I gave them a general framework, and then the words and the movements were theirs.

We had a problem casting the role of Gianni. My producer Matteo Garrone suggested I do it. I don’t think a professional actor would have put up with the chaos caused by the ladies. So I offered myself as a way of balancing things out.

In the film the four old ladies behave in a way that’s reminiscent of children. Was that a conscious connection on your part?

I strongly believe that there is a side of one’s old age that can be very beautiful. I lived with my mother for many years, so I had the opportunity to see it by myself. Old people love having fun — they enjoy themselves and they have lots of energy. There is a deep analogy between childhood and old age: the desires, passions and arguments resemble what happens with children.

As well as looking after my mother, I had two daughters, and to me looking after old people and children is equally tiring and demanding. There are moments of fun and joy, and there’s lots of hard work. But the beautiful thing is, you always get something back. It’s that gratification which keeps you going.

What made you choose such a distinctive jazz-based score for the film?

The score was created by a 22-year-old, Stefano Ratchev, who’s a first cellist in the youth orchestra of the Arts Academy in Rome. I was criticised for using Stefano: ‘not only are you casting 90-year-old ladies,’ I was told, ‘but you want to pick a 22-year-old. You must be out of your mind!’

He wrote the music based on the screenplay. When I saw the rushes, I realised the music matches the storyline perfectly, and it provided a natural rhythm to the editing. Having the music already in place during the post-production added an element of originality and passion.

What lies behind the current resurgence in Italian cinema?

I think because of the economic and political crisis in Italy, the cult of glamour and fake appearances is giving way to more realistic portraits. And people are starting to work together in interesting ways. For example the lead singer of Massive Attack, Robert Del Naja, whose family comes from Naples, called up Matteo Garrone and said that he’d like to do the last track of Gomorrah. It’s these sort of collaborations which allows Italian movies to leave the borders of Italy and become known elsewhere.