The artist-filmmaker explains how he came to make an essay film about Paul Lynde, the unforgettable voice of Hanna-Barbera baddies in the 60s and 70s. 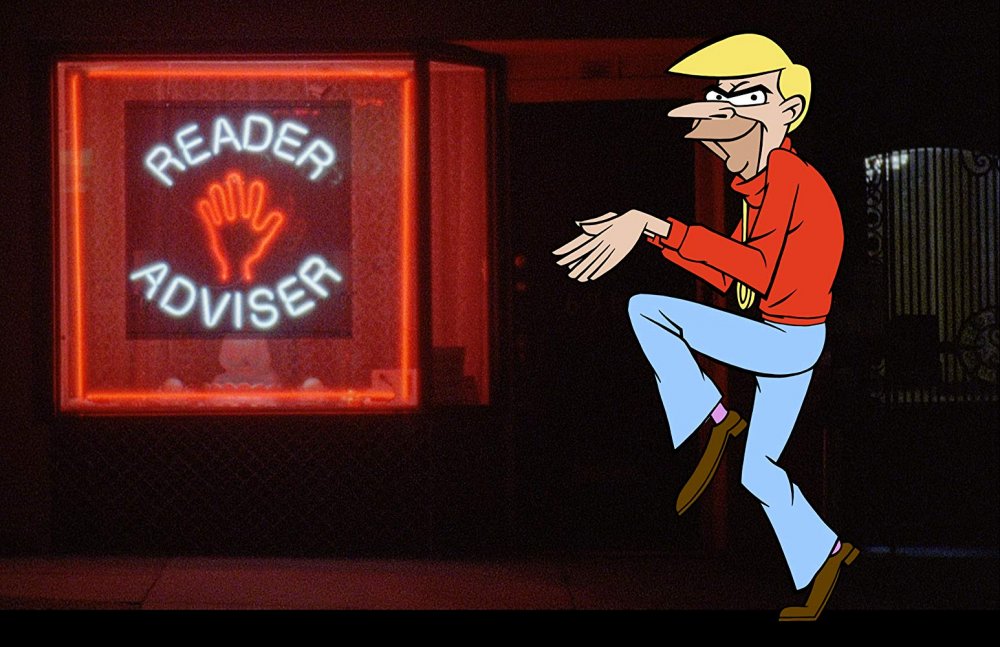 Doozy explores the life and work of Paul Lynde through the device of fictional animated antihero Clovis, voiced by Mark McKinney

Doozy, the first feature from artist-filmmaker and performer Richard Squires, is a creative essay film that explores of the life and work of Paul Lynde, the controversial actor behind Hanna-Barbera’s best-loved cartoon villains: Sylvester Sneekly aka the Hooded Claw on The Perils of Penelope Pitstop (1969-70), Mildew Wolf on Cattanooga Cats (1969-71), Claude Pertwee on Where’s Huddles? (1970) and Templeton the rat in the studio’s feature film Charlotte’s Web (1972). Lynde was a closeted gay man, troubled by alcoholism and anti-social behaviour, the traces of which Squires explores through Lynde’s heinous cartoon personas.

Part live-action documentary and part animated interpretation, Doozy deploys some traditional documentary approaches including retrospective interviews with friends and family and recreations of controversial incidents; but Squires’ ingenuity comes to the fore with a game show (a nod to Lynde’s long-running role on the game show Hollywood Squares) featuring a range of experts in animation, comedy, sexual transgression and linguistics – and with the director’s own cartoon creation, Clovis, a miscreant with some unhealthy habits. Premiered at LFF Experimenta and International Film Festival Rotterdam, the film is now touring select UK cinemas.

Tell us a bit about your background as an artist and filmmaker?

I’m a London-based artist-filmmaker who has worked primarily with moving image but also with animation, performance and comics. My practice often involves appropriation and provocation, and recently it’s been addressing what might be called ‘problematic’ representations in cartoons and comics. I’m probably best known for animated shorts like Homo Zombies and Francis and for the live work The Uncle Hans-Peter Party in which audience participants donned plastic masks and took on the persona of an incestuous, Bavarian patriarch. 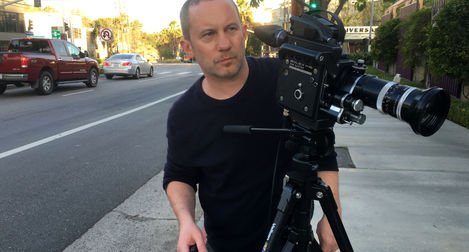 How did the idea for Doozy come about? What interested you about cartoon villains and about Paul Lynde in particular?

I’ve long been interested in the intersections in the histories of criminality and sexuality and in representations of queer criminality. As a kid, I was glued to Saturday morning cartoons in the 1970s. Hanna-Barbera produced most of the ones I watched and had an enormous influence on me. Apparently, by the mid-1960s their shows were attracting a global audience of over 300 million, so I was one of many who grew up with their images – of families, of suburbia, of villains, of humour.

I related most to the villainous characters, not the ‘good guys’ who were these avuncular representations of familial normalcy. About five years ago I came upon Claude Pertwee, a ‘confirmed bachelor’ character and the antagonist in a Hanna-Barbera show called Where’s Huddles. He was voiced by the actor Paul Lynde, who had also voiced favourite villains the Hooded Claw and Mildew Wolf. Each of these characters dragged up in different disguises, experienced humiliating failure at the end of every episode and had this incredible snarky, camp voice and sniggering laughter.

I researched Lynde’s life – his stardom, his struggles with alcohol, his closeted sexuality, the tension between his public and private worlds – and, in light of the history of queer cinematic representation, the obvious question was why Hanna-Barbera cast him in these villainous roles. I didn’t want to make a biographical film about Lynde, but something akin to an essay film that would use his voicing of these villains as a starting point, from which the film could expand and consider some of the broader issues around hysterical masculinity and queer villainy. 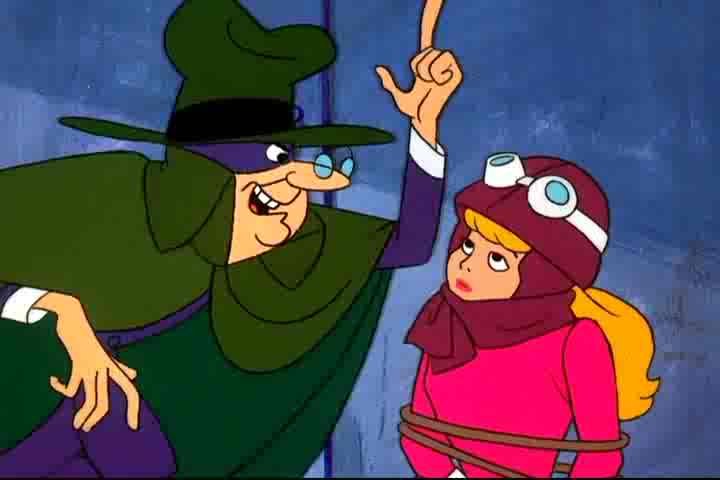 Why this title? What does it mean to you?

Doozy is a weird, American word. I remember hearing it as a British kid watching Hanna-Barbera cartoons and not really understanding what it meant. I chose it because a ‘doozy’ means something extraordinary or unusual but it’s often used in a negative context, so people say things like “It was a doozy of a black eye.”

What is important to you about outsiders’ lives – particularly, at this time, those of closeted gay men?

Queers have always been outsiders, and I think we should be looking to and celebrating that outsider status, particularly in the current climate. I think being closeted is compelling because everyone who decides to articulate their sexuality as different has at some point experienced it; it brings a level of complexity to a life. When you hear older queer people speaking about the duality of their lives pre-1960s, their sense of their own existence, the masking, their own criminality, that’s something that we need to hold on to somehow, not merrily discard as we skip down the road to assimilation.

The film investigates hysterical laughter as a kind of social commentary or personal defence.

Hysterical laughter was used in the cartoons very much as a marker of difference to signify the villains. Sophie Scott and Jens Kjeldgaard-Christiansen discuss this in the film. But hysterical laughter also harks back to the stereotypes we have about asylum inmates and I always think of those stories of outbreaks of contagious, uncontrollable laughter among school children. It’s a cultural signifier of difference; it’s complex and open to misinterpretation but that makes it all the more fascinating. 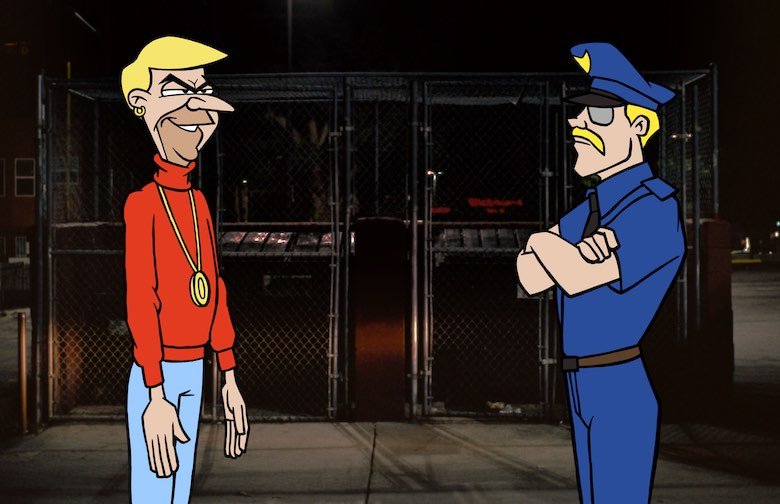 The animation, especially creating a new character in Clovis, is at the heart of the film and very much in keeping with the animation styles of the 1970s. How did you bring Clovis into being?

I liked the idea of inverting the normal process and having an animated character ‘play’ the actor. It was important that Clovis was not just Lynde animated, but a distinct character re-enacting these alleged stories from the actor’s life. I wanted Clovis to reference that 1970s ‘limited animation’ style, so I researched these acerbic male antagonists from the time and came up with his design, before handing him over to Elroy Simmons to breathe life into him.

Elroy is an incredible draughtsman and, as we’ve worked together for over ten years, he understands what I’m after aesthetically, very quickly. I design the characters and then he animates them. He knew of Lynde too, so we enjoyed lots of semi-pissed discussions about 70s pop culture during the animation production.

In most animated productions the character is voiced first then animated, but Clovis was actually the last character to be voiced, and by the brilliant [Canadian comedian] Mark McKinney, who I actually met through a mutual friend on the set of his sitcom Superstore. We discussed whether Clovis’ accent should be American or British and in the end, because Clovis is a distinct character and there are aspects of his creator in there as well, we went with the British drawl. 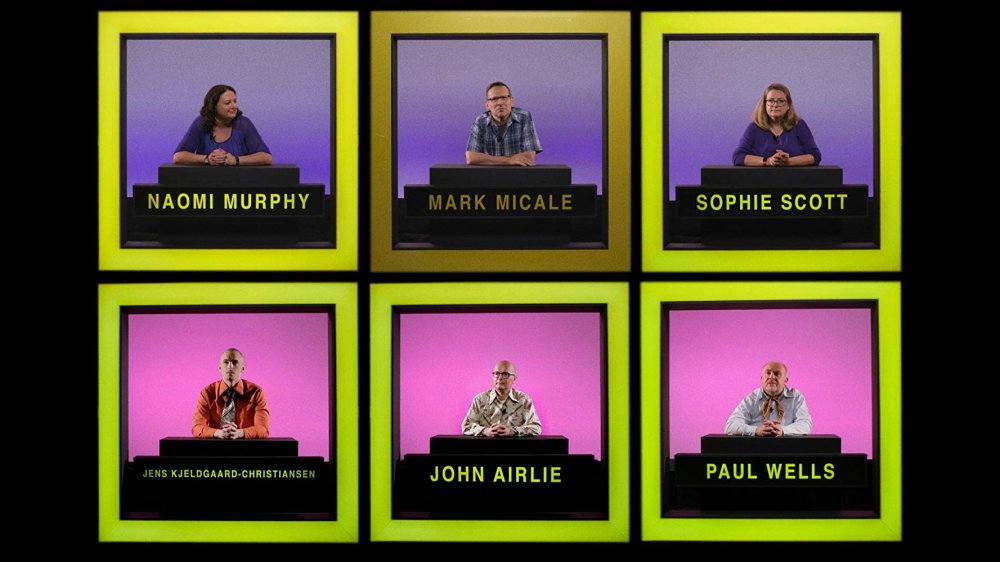 How did you arrive at the structure of the film?

I always wanted the animated sequences, these night-time scenes where Clovis re-enacts episodes in Lynde’s life, to be the backbone of the film and for them to gradually reveal some of the complexity and humour of his circumstance. We also wanted to establish early on the detail of Lynde’s voicing of the cartoon villains, then allow the film to expand outwards and consider representations of cartoon villainy, hysterical masculinity, voice as a signifier of otherness, disguises etc, and finally for the narrative to come back to why Hanna-Barbera might have cast Lynde.

The decision to go to Ohio was really important and I think the Ohio footage works to underscore the idea of difference between Lynde’s worlds. We see Ohio in the daytime and the West Coast only ever at night. I think much of the Ohio footage also functions on a textural level. The interview with Lynde’s classmate became central to the film because it is loaded with subtext and, for me, really accentuates ideas of masking and disguise.

The film plays with a creative tension between realism and cartoon visuals and sounds. What were you hoping to achieve with this effect?

As the animated sequences were conceived of as re-enactments, we felt that the aural strategy should mirror the visual one. So we have 2D animated characters re-enacting scenes against live-action backgrounds, mostly shot on 16mm in Los Angeles at night. The sound design mixes realistic and diegetic sounds with cartoon sound effects, so hopefully it brings that sense of more going on here than just ‘characters in their own world’. 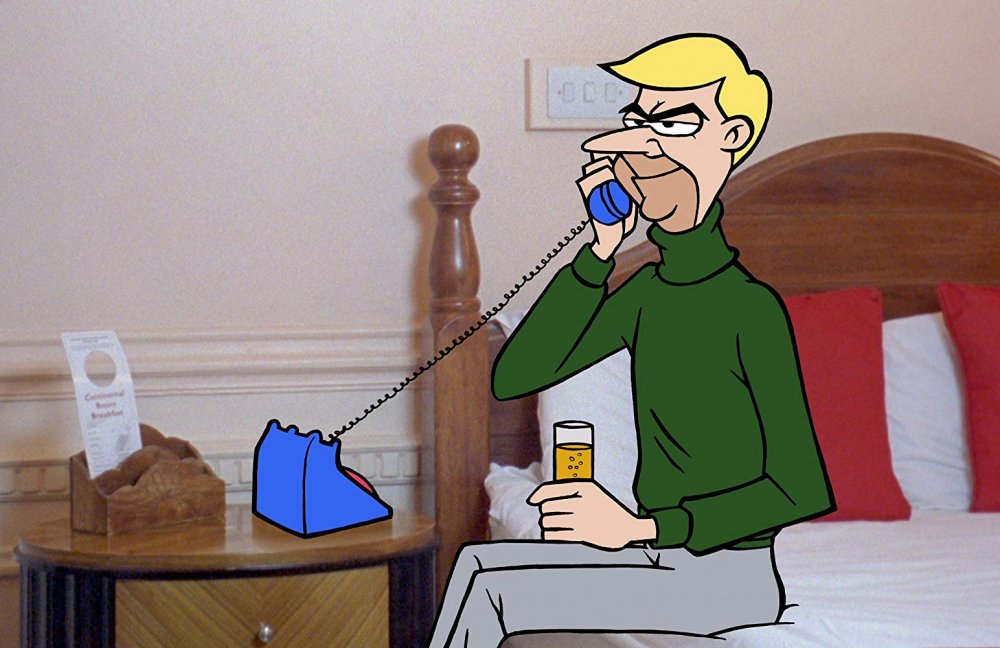 The plays with duration. Some of the cycles are extended so, for example, you see Clovis streaking down Santa Monica Boulevard in what seems much more like ‘real time’ than ‘cartoon time’, or Don, his best friend, smoking a cigarette for an extended period. It’s a bit like the animated equivalent of artists using long, durational takes as a cinematic device.

For the music, Oliver Davis and I discussed the idea of referencing animation cycles by using repeated phrases and also alluding to that slightly countercultural, slightly disco late-night 1970s California sound. Oliver’s music brings such a lot to those scenes.

The less savoury side of Lynde’s life is crucial to the film’s study of the social and sexual outsider.

There’s a slew of alleged stories of Lynde’s drunken escapades and they seem to grow more frequent the more dissatisfied he became with his career. There are alleged stories of his arrests for drunk driving, streaking down Santa Monica Boulevard, being verbally abusive on aeroplanes and getting ejected from bars. Perhaps the most shocking was the time a younger actor friend fell from Lynde’s hotel window in San Francisco. There’s a strong sense, too, that these stories were played out in a kind of pre-Stonewall climate and at a time when the media was much more discreet.

These controversies were one of the key things that drew me to Lynde. I think, as a gay man and an artist, the stories really resonate because they speak about ambition, rejection, shame, self-destruction, oblivion, being on the outside looking in.