Chris Shepherd: “You give the audience a nostalgia massage… and then it turns”

The “bit warped” filmmaker discusses the changing state of animation, Scouse humour and why he has made a sequel to the unforgettable Dad’s Dead. 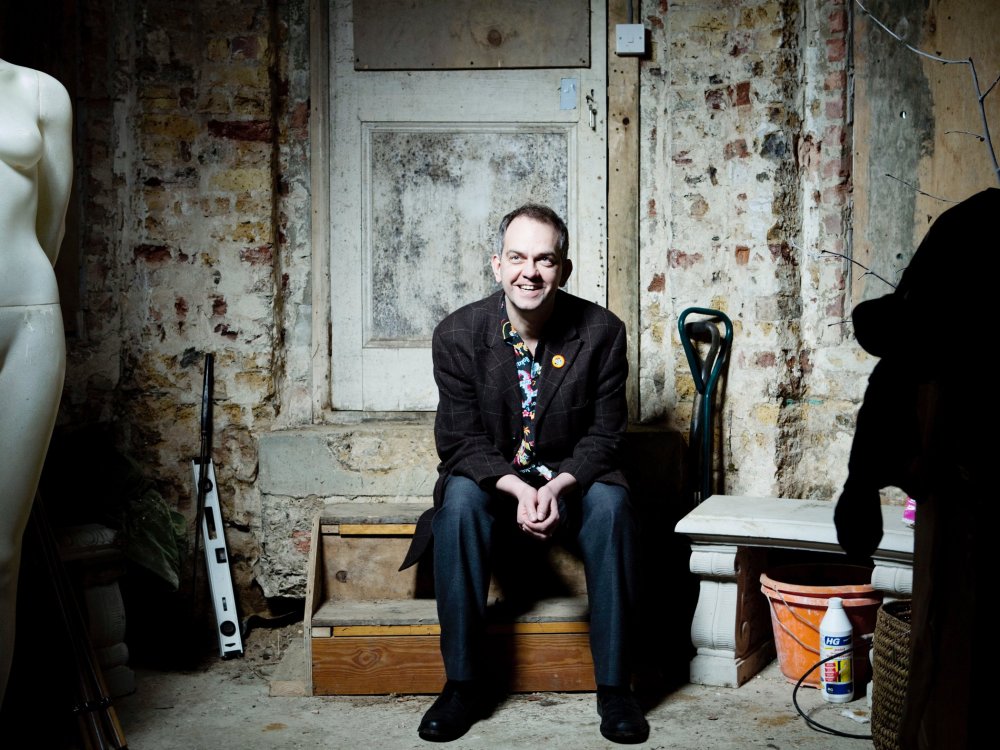 Chris Shepherd: ‘I think the real world can be fantastic’

Within the close-knit community of British animation, everyone knows Chris Shepherd. As a director, producer and teacher, he is something of a living legend. Born in Liverpool in the late 1960s, he studied animation at West Surrey College of Art and Design, before working at London’s Speedy Films as a production manager. Along with his first independent short The Broken Jaw (1997), his animation of Paul Hatcher’s World Stare-out Championship cartoon for BBC2’s Big Train (1998-2002) created a reputation that enabled him to set up Slinky Pictures with producer Maria Manton.

Chris Shepherd will be introducing a retrospective of his work and giving a masterclass at this year’s Manchester Animation Festival on 15 November.

The Warped, Wonderful and Terrifying World of Chris Shepherd is the opening night gala of the 2016 London International Animation Festival on 2 December.

Dad’s Dead (2003) was a dark tale, narrated in the first-person by Ian Hart, about a childhood friend called Johnno whose behaviour becomes increasingly twisted. It won several awards and established Shepherd’s reputation for using animation to embellish live action; a common motif but not a set formula in his work.

The all-animated Who I Am And What I Want (2007), co-directed with David Shrigley, about a psychotic social outcast who lives in the woods, and the entirely live-action Bad Night for the Blues (2010), about a Conservative Club Christmas party, reveal his range.

In recent years he has produced a number of music videos, both live-action and animated, and production funding from France has enabled him to make a follow-up to Dad’s Dead. Johnno’s Dead (2016) was broadcast on Arte in France and Germany in October, and will get its British premiere at the London International Animation Festival in December. 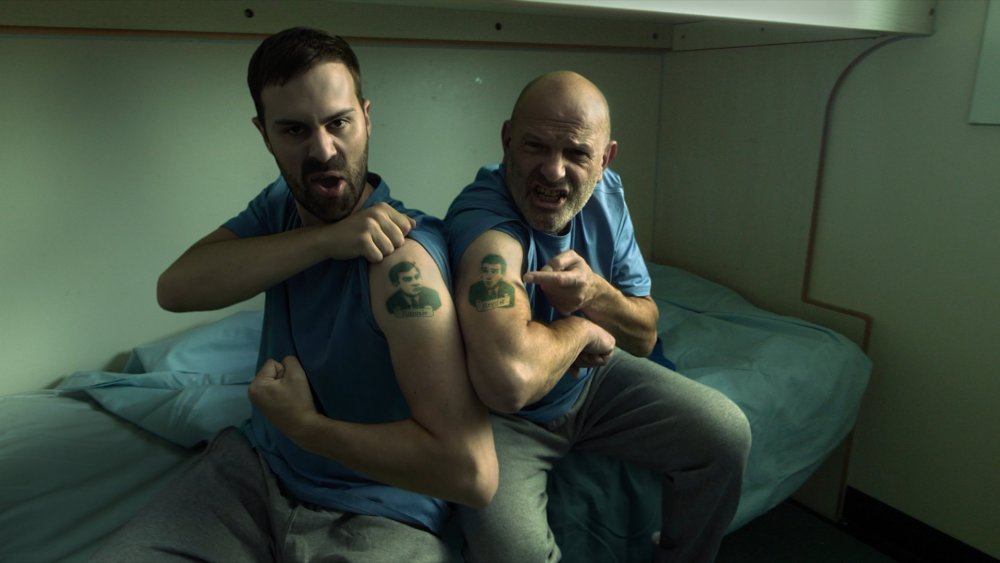 What was the impetus for going back to the world of Dad’s Dead?

I did a film for Canal Plus called The Ringer (2013) and originally when I pitched it to the production company, Autour de Minuit, I said I could do a sequel to Dad’s Dead, revisiting where I came from. As I wrote The Ringer it became more about my father and a different sort of narrative. But as I was doing it I was thinking about Dad’s Dead again. And then it just came to me: I got a sense of what would have happened to the narrator character 13 years on when he came out of prison. And I suppose that because I’m 13 years older, I’ve lived that time away from Dad’s Dead and have that retrospect on it.

So I wrote this story and the first thing I did was send it to Ian Hart, who read it and said: “Oh my god, it’s brilliant. Come to our house now, do it now, record the story now, do it!” So I went to his house, and put my recorder on the kitchen table and he was talking about day-to-day stuff, and then he just snapped into it; went into that narrator character. I remember walking away and I got a shiver down my spine and I thought: “Oh god, I’m back there again, I’ve got to do this now. I’ve done this voiceover and it’s so amazing, I have to make this film.”

Your films often combine an affectionate nostalgia for the past, with a recognition of its darker shades.

My favourite films are the ones that are like that. When I was a kid I always loved Midnight Cowboy (1969), One Flew Over the Cuckoo’s Nest (1975), Billy Liar (1963), films that are bittersweet. Maybe it’s because I’m a Scouser, it’s that sort of Scouse humour: Alan Bleasdale, Willy Russell. Dealing with something really dire, but then telling a joke about it to make it more bearable, can be like a reflex action, coming from Liverpool. I think if you’re going to tell a story that is really horrific, you’ve got to pull the audience in.

Dad’s Dead is quite upbeat in the first half, so you’re pulling the audience in and giving them a bit of a nostalgia massage, and then it turns. I think it has real power when you do that. In a way, the second film is more of a challenge because I started in a darker place. In Dad’s Dead you are on side with the narrator because he’s sort of like a victim. But in the new one he becomes the aggressor, so that’s even heavier in a way. I think you need to counterpoint it all the time so you’re up, you’re down, you’re up, you’re down. You’ve got to keep the audience onside; if it’s too dark they’ll run a mile.

You skip quite effortlessly between live action and animation. How does that suit your working methods?

I suppose it’s something I’ve always done; I think the real world can be fantastic. When I went to art college it was quite safe and middle-class. People were making films about princesses and castles. It was all about amorphous blob guys pulling rocks across the desert, so I couldn’t relate to that.

When I made Dad’s Dead I wanted to film my walk to school where I grew up; I wanted the council estate around the corner to be just as glamorous as the big castle with the princess. Why can’t that be beautiful, why can’t that be something special, why can’t things in the real world that have no importance come to life? I’ve done that with Silence is Golden (2006) as well, but it’s always got to have a psychological reason for it.

I don’t like just plopping in animation for the sake of it; there has to be a reason for it to have any power, otherwise it becomes just like wallpaper. I suppose I do have that hybrid style, but then I’ll twist it into something, low-tech, high-tech… Just as long as it’s right for the story, that’s the main thing.

How has the British animation industry changed since you entered it?

When I started I remember I was a good storyteller, but my drawings weren’t so great. So I went around knocking on lots of people’s doors and basically people told me to get lost. They said I couldn’t draw like Walt Disney – this is about 1992 – so get lost. There were a few people like Bob Godfrey, he was great to me.

But I got a job with Speedy Films and they were quite interesting because they were all RCA graduates so they came from an art background. They were like the pioneers of coming at animation from an illustrator base. Because before that it was always assumed that the audience wouldn’t accept anything bar Disney, or something traditional. So that was a bit of a breakout moment and things started to change.

Then there was a change in technology with Flash and After Effects, and that became a massive thing. Previously there were the giants of [British] animation like TVC, Grand Slamm or Hibbert Ralph – they’d all have armies of people doing cel painting and rostrum cameras. Suddenly they were all replaced by somebody on a laptop, and you could do anything.

In a way the process of animation has become more democratic, so if you are in a council estate in Leeds and have a laptop and an idea then you can make a film, and that’s a great thing. Before it was much more elitist because it was about having the gear, having the people, having the resources; it was not something you could do easily. But now it’s bust open, and if you have an idea you can be as outlandish as you like. The negative is there is not as much money, but the positive is you can do anything.

Watch Who I Am and What I Want (2005), co-directed by Shepherd and David Shrigley

You are featured at the opening night of this year’s London International Animation Festival as “the warped, wonderful and terrifying world of Chris Shepherd”. Do you think that is a fair billing?

You’ve got ‘wonderful’ in there.

It’s sort of been funny doing Johnno’s Dead, because it turned into that more negative side of things. But that’s how some people think, isn’t it? I suppose what I would say is, it’s like Mel Brooks says: if you are going to go up to a bell, make sure you ring it. Don’t just go up to it, look at it and walk away. If you are going to do something, do it, and I think with my films I’ve gone to the end conclusion the best I can at the time. I don’t hold back.

I suppose I am a bit warped, yeah. Terrifying? I think the audience needs a bit of a kick up the arse. They need shaking up. When I made Dad’s Dead I wanted to make a film that everybody would hate. I couldn’t care less, so I just went for it. And then it won loads of awards, which of course makes me a total loser. But the new one, I was hitting that territory again. But I think it’s about being true to yourself, that’s the key isn’t it?

Watch the trailer for Johnno’s Dead

Related to Chris Shepherd: “You give the audience a nostalgia massage… and then it turns”