Art within the machine: how machinima turns the camera on videogames

People having been making movies out of videogame graphics since the technology first allowed gamers to press record. Whether fan homages shared online, pointed critiques or gallery pieces, these works are part of a thriving and fast-evolving practice. 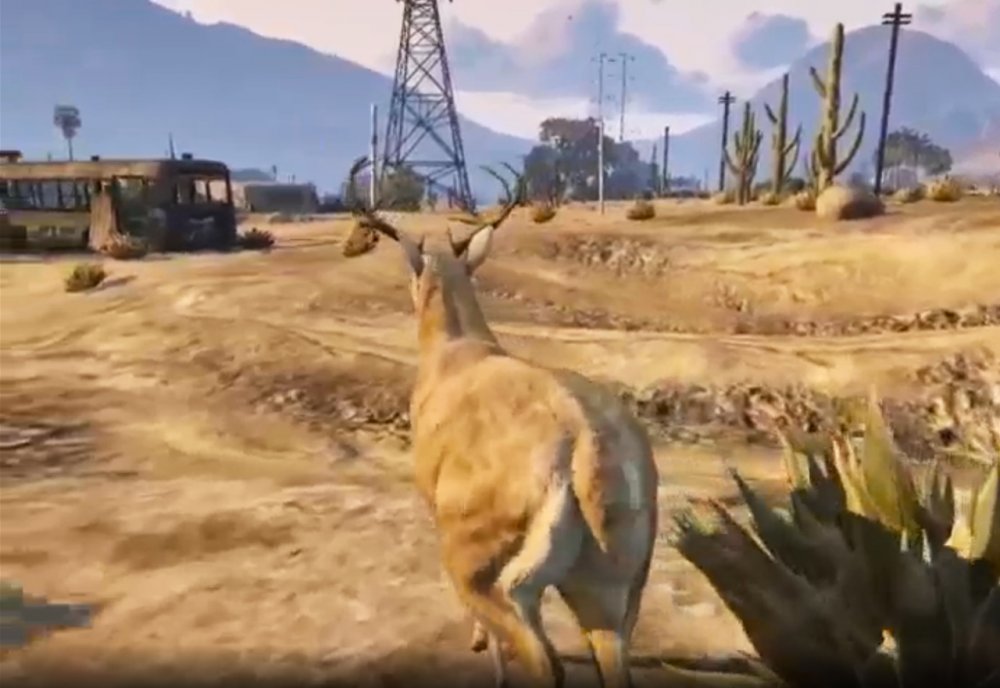 Machinima – a portmanteau of machine and cinema – is a term used to describe the process of using real-time computer graphics engines to create a cinematic production. It’s a practice that has existed for as long as in-game recording has been possible, the first generally attributed work being United Ranger Films’ Diary of a Camper – a minute-and-a-half long fan-film made within first-person shooter Quake (1996) – though some claim examples that pre-date it. Miltos Manetas’ Miracle, for instance – shot using flight-simulator F/A-18 Hornet (1993) – was made in the same year. Both of these films use their source material in different ways, to different ends; and while one of them was exhibited on the wall of a major gallery, the other was released online for free as a downloadable demo-file.

Is This a Game to You?, a machinima screening and panel discussion, takes place at BFI Southbank on 3 April 2019, as part of the Raised by the Internet season.

Indeed, two histories of the practice of machinima run concurrently, with little crossover. The first includes the sort of films made by game-players themselves, a tradition into which Diary of a Camper fits. First arising through experiments from early in-game recording options offered by games such as Stunt Island (1992), Doom (1993) and Quake (1996) that allowed players to capture and export individual stunts or kills, or record entire matches or speed-runs, this sort of machinima was made by gamers, for gamers.

Before long, creators were orchestrating narrative scenarios of increasing complexity, entirely in-game, and dubbing computer-mic-recorded dialogues over the edited materials. Several years after that, a term to describe this practice, ‘machinima’, was coined and a scene was born, one that grew sizeably in the years following. Works such as Rooster Teeth Productions’ Red vs. Blue (2003-present) or Jon Graham’s Arby n’ the Chief (2008-present) showed how polished and professional the practice could be, and also how sustainable: those two examples alone generating more than 500 episodes and almost one million subscribers on YouTube. Like gaming itself, a niche pursuit became popular entertainment.

Parallel to this, artists have adopted the method, making films within videogame environments that, as a rule, take a more critical position – offering reflections on the medium and its mechanics; how games work; and what they can show, or fail to. Besides the aforementioned Miltos Manetas – whose series Videos After Videogames (1996-2002) extracts idle moments from games including Super Mario 64 (1996) and Tomb Raider (1996) and situates them as standalone works of video art – artist Cory Arcangel has long seen the artistic potential of videogames.

An artist who appropriates various aspects of popular culture, Arcangel counts NES cartridge hacks among his best-known works. Both Super Mario Clouds (2002) and Super Mario Movie (2005) present modified versions of Super Mario Bros (1985) as video installations. The former strips the game of everything but its scrolling vista of pixelated white clouds and blue skies; the latter revisions it beyond recognisability as a colour-shifted, graphically warped surrealist modification. Both pieces take the familiar iconography of one of the world’s most recognisable videogames and morph it into something else, exemplifying the credo of creating something new from found sources that is central to machinima.

As Manetas writes in his accompanying manifesto for Videos After Videogames: “artists after videogames don’t play videogames but relate to them”. Artists often deconstruct game-worlds from a distance to see what they reveal about the real one they reflect.

In Angela Washko’s Free Will Mode (2013-14) – a series of videos made within sandbox life-sim The Sims (2000) – the artist tests the limits of the autonomy of the characters in the game by setting them to ‘self-play’. She finds that while they will make certain choices to survive (eg eat, sleep, defecate), they can never alter the external environment they are placed within. Across the videos, the characters drown in pools without ladders, starve in rooms without doors and burn to death in house-fires that they are too exhausted to extinguish. These elaborately staged torture environments expose humanity’s own sometimes unquestioning relationship to the built environment.

Working along similarly anarchic lines, Brent Watanabe’s San Andreas Streaming Deer Cam (2016) was a live-stream (now archived as a recording) of a modified version of Grand Theft Auto V (2013) that spawns an AI deer into the game’s city, and leaves it to play itself. It’s a game without players: thousands tuned in to watch the critter wander its open-world expanses. A total inversion of the game’s intended parameters, it proved to be a surreal, strangely compelling experiment into the unpredictable capabilities of in-game artificial intelligence systems.

These sort of experiments sit adjacent to a wider tradition within artist’s machinima, the idea of ‘game interventions’, a videogame version of performance art that sees artists interacting directly with game worlds and their players in order to make statements or provocations. Georgie Roxby Smith is an artist who regularly makes work in this mode, much of which explores game violence, exposing how regularly it is gendered. Her jarringly fatalistic intervention 99 Problems [WASTED] (2014) sees a semi-clothed female avatar repeatedly and ritualistically killing herself within the world of Grand Theft Auto V, the surrounding non-playable-characters barely registering a response as she blows her brains out beside them. Each death is an empty death, and results in an automatic respawn.

Similar in approach is Joseph Delappe’s straightforward but pointed dead-in-iraq (2006-11). Started on the third anniversary of the start of the Second Gulf War, this longitudinal memorial-slash-performance sees the artist enter America’s Army (2002) – an online multiplayer first-person-shooter built as a recruitment and training tool by the US military – and type the “name, age, service branch and date of death of each service person who has died to date in Iraq” into the game chat.

Other films link war-game violence with real-world realities. Josh Bricker’s Post-Newtonianism (2010) features two channels. One shows a video released by WikiLeaks of US attack helicopter footage from Iraq, the aircraft’s pilots audible on the soundtrack as they fire upon civilians. The other displays similar imagery from Call of Duty: Modern Warfare (2007). As audio from both sources mixes across the two frames, the origin of its source becomes indeterminable, the two videos increasingly indistinguishable from each other. Videogame representations rarely achieve verisimilitude, but here, the distortion of the real-world footage renders both depictions equally unreal, showing how easily we are desensitised to images and the meanings behind them.

Claire L Evans’s Modern Warfare (2010) is set within the airport level of Call of Duty: Modern Warfare 2 (2009), controversial at the time of release for allowing the player to partake in a terrorist attack and slay non-combatants. In her film, Evans chooses to attack no one, turning her character’s assault rifle on the various video monitors that scatter the airport. By diverting the game design’s intended play-path and instead wreaking destruction on the screen-apparatus, the film seems to almost be destroying itself, the game’s first-person avatar – only ever seen as a pair of hands grasping a gun-barrel – trying to escape from the confines of his existence by breaking the rules of the creation within which he is trapped. 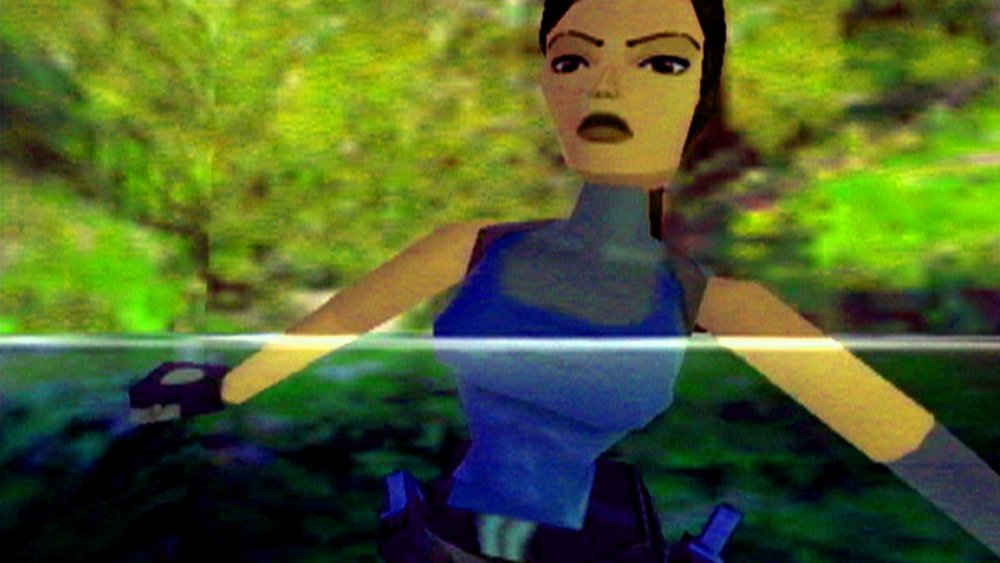 The avatars that game-players control have been a perpetual source of interest for artists. Peggy Ahwesh’s She Puppet (2001) looks at Lara Croft, the protagonist of Tomb Raider (1996). Using quotations from Fernando Pessoa, Joanna Russ and Sun Ra, Ahwesh weaves an oblique verbal essay on “women, virtual bodies, role-playing, identity issues and fandom”, while the Croft character is seen moving around the game world distractedly, her body under near-constant attack.

An equally unsettled expression of the player’s relation to (or rather, alienation from) their avatars is in Alex Hovet’s Counter-Charge (2016), which takes the semi-explicit oddity Leisure Suit Larry III (1989) as its source. In this dreamlike, delusory film, the eponymous character wanders the game’s tropical environments, frustrated in his attempts to pursue the subject of his attentions by a remixed game-world that seems to resists his goal at every turn. As Hovet explores the game’s peculiar gender dynamics, his role as controller of the Larry character seems to be in a battle against his own innate, relentlessly libidinal drives. The game’s strange text dialogues falter when faced with an unexpected female player with an agency of her own.

Some artists are interested in games as a cultural phenomenon: what game-worlds mean to the players who are immersed in them. Larry Achiampong has made several works that involve videogames, but Ph03nix Rising: The 3rd Son (2014) is particularly connected to games as a culture. Splicing in images from a wide selection of games including Streets of Rage (1991) and Street Fighter II (1991), alongside other pop culture sources, the film explores how Achiampong shaped his identity from the media that he and his brother consumed. More than just escapism, games were spaces “where solutions to everyday realities could be achieved”, test sites for working out who they were and what they might become.

Jon Rafman’s Codes of Honor (2011) has a similarly reverential tone, a nostalgic ode to New York’s classic arcade, the Chinatown Fair, which closed in the year of the film’s making. Like Ph03nix Rising it mixes sources, blending in-game materials with documentary footage of the arcade and the players that frequented it. Rafman’s voiceover describes the specific pleasures of hardcore gaming, the positive feedback loops that come from skill-improvement, the thrill of close competition and the furtive sense of community present within the fighting genre.

Other artists are keen to acknowledge gaming culture’s darker sides. Kent Lambert’s RECKONING series (2006–present) looks at the points where gaming communities, popular culture and contemporary politics bleed together, with results that are as strange as they are unsavoury. Both RECKONING 3 (2014) and RECKONING 4 (2016) have soundtracks featuring disembodied, depressed-sounding voices lifted from online multiplayer games, whilst the images (a collage of various videogame environments and manipulated clips from blockbuster movies) seem similarly alienated.

Ismaël Joffroy Chandoutis’ SWATTED (2018) goes a shade darker, looking into the phenomenon its title refers to, whereby gamers call in fake threats to the police on behalf of their online-gaming opponents who are live-streaming, resulting in armed officers kicking their doors down in full view of the still-broadcasting webcam. The film mixes narration from individuals who have been subjected to this dangerous and occasionally fatal prank with artistically glitched wireframe landscapes from the games they play.

While artists of all descriptions have been using videogames as source material, few would call their work ‘machinima’, and fewer still would claim any affinity with the community that grew around the term. Making distinctions between ‘popular-machinima’ and ‘artists-machinima’ isn’t necessarily productive: not all the above makers would describe themselves as artists, and to deny artistic value to the machinima being made online would be doing it a disservice.

The community’s hub, multichannel network machinima.com, amassed more than 12 million subscribers before its latest owner AT&T shut it down earlier this year, deleting all of its users’ content in the process. It is easy to forget how impermanent the web can be, until a corporation wipes out an entire subsection of it without warning. Machinima is one of the most democratic forms of filmmaking, requiring only a computer for its creation, but without an equally independent archival infrastructure it might easily end up forgotten. Cinema has had more than a century to get where it is, whereas games have only really had half of that, depending on where it is agreed they started. It would be a shame if something involving the convergence of these two young media did not get its fair chance to grow too.